Millwall look to make it five consecutive matches without a defeat when they take on Coventry City at the Den. The visitors also come into the game with a good run of results.

Millwall were quite lucky to come away with a goalless draw against Swansea City despite watching the opposition create a lot of chances. Coventry City made it four wins in the last five matches following a 1-0 success over Cardiff City.

Millwall have had an underwhelming start to the home matches this EFL Championship season. Apart from the win over strugglers Blackpool, Millwall have been able to enjoy much success at the Den this season. Meanwhile, Coventry City also are struggling away from home and they have managed only a narrow win over strugglers Blackpool on the road this season. This match should be a tight contest, but Millwall will be keen on avenging the back-to-back losses suffered against Coventry City – including the 6-1 loss back in May.

The occurrence of high-scoring matches is quite common when Millwall and Coventry City play against each other with only two out of the last six meetings producing over 2.5 goals. This time around, both teams are not very great in terms of overall form. Coventry might look to play on the counter-attack that was very rewarding against Cardiff. Even then, this could be a low scoring game.

Only on two occasions have either one of the teams failed to score in the last six meetings between Millwall and Coventry. However, this could be one of those occasions with the two teams struggling for form that they may end up without a goal.

Millwall were under the siege from Swansea in the last match, but the Londoners still managed to come out with a point from the game. The game at the Den will provide a great opportunity for Millwall to put some distance between them and the bottom three. Manager Gary Rowett is in an excellent position with no injuries in the squad apart from Maikel Kieftenbeld.

Coventry City have been pulling together some excellent results at home. After managing to pick up four wins from the first four home games of the season, Coventry find themselves just one point below the top. In order to sustain the position, Mark Robins would need his team performing even away from home. Tyler Walker is the only injury worry for Coventry.

Top Betting Odds and Stats for Millwall vs Coventry

Questions about Millwall vs Coventry 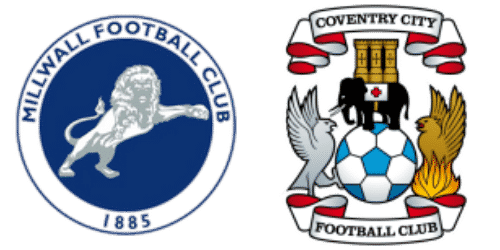 Where is the match scheduled? The Den

Which team is the favourite to win? Millwall