Cardiff came out on top of a relegation six pointer in the week, which has almost confirmed their status as a Championship side for next year. Can they follow it up with another positive here? Find out with our Millwall vs Cardiff match preview with free tips, predictions and odds mentioned along the way.

Cardiff's only loss in their last four games was against Liverpool, one of the best teams in the world, in the FA Cup; they've done a lot better in the Championship recently, winning three consecutive league games. Millwall, on the other hand, have struggled to win games recently; they have just one win in their last seven games, with a draw and five losses. It's also worth mentioning that Cardiff are unbeaten in their last eight meetings with Millwall: although to be fair, seven of those eight encounters ended in draws. Considering both teams' form, coupled with their tendency to draw when they play each other, we're picking Cardiff to win or draw.

We fancy both sides to net

We have pointed out that both teams have drawn seven of their last eight meetings: we would also like to mention that encounters between these sides have not been one-sided when it comes to scoring goals. Both teams found the net in all of the last six clashes between these sides. Also, both teams have not had too much difficulty conceding goals recently; Cardiff have allowed at least one goal in 28 of their last 30 games, while Millwall have conceded in 11 of their last 14 games. On that note, we're making the prediction that both teams will score.

Check out the key stats & form for Millwall vs Cardiff

Millwall are a side that you would say have absolutely no danger of relegation. Well, Cardiff are only five points behind them after their midweek win so another Cardiff victory here would thrust them further towards safety. For Millwall, they're destined for a midtable finish regardless of how this game goes.

Millwall were competing for a promotion playoff spot a couple of months ago, but not anymore; they've managed just two wins in their last 12 games. Gary Rowett's men have lost five of their last seven games; they'll hope to right their wrongs as they host an in-form Cardiff side.

Cardiff completely destroyed a struggling Peterborough side 4:0 a couple of days ago; they've won three consecutive league games for the first time this season. Steve Morison's men will fancy their chances as they visit Millwall today; they'll hope to make it four wins from four, for the first time since February last year.

A brief FAQ ahead of Millwall vs Cardiff 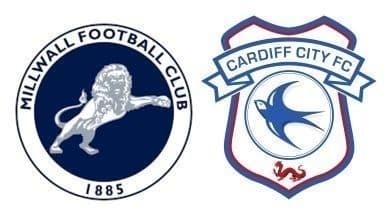