In every World Cup year, the media build-up is dominated by preview articles picking out the players set to star during the tournament, aiming to point fans in the direction of the players most likely to shine on football's grandest stage.

Amid all the usual suspects – Neymar, Lionel Messi, Cristiano Ronaldo – no such column would be complete ahead of Russia 2018 without the name Sergej Milinković-Savić.

The Serbian midfielder carries on his shoulders his nation's hopes of progressing beyond a group which contains Brazil, Switzerland and Costa Rica, but he might already have made worldwide headlines before a ball is kicked in Russia.

Having earned widespread acclaim for his regularly outstanding displays with Lazio in Serie A, Milinković-Savić is Europe's hottest property, attracting interest from the likes of Real Madrid, Juventus, Manchester United, Manchester City and Paris Saint-Germain, and could be the subject of a big-money, blockbuster move at the end of the domestic season.

Indeed, Sky Italia reported recently that Lazio already have an offer worth a staggering €200million on the table from an unnamed club for the gifted 23-year-old midfielder – a figure which would, as things stand, make him the second-most expensive player in history, behind only Neymar.

That's a lot of hype for a young player to carry, but Milinković-Savić justifies such speculation. Since signing for Lazio from Belgian side Genk for £16million in 2015, the Spain-born Serb has rapidly progressed into one of Serie A's outstanding players.

With 13 goals to his name this season, 11 of which coming in the Italian top flight, Milinković-Savić has already produced the most prolific campaign of his career to day, chipping in with six assists, powering the Biancoceleste‘s push for a top-four place.

Simone Inzaghi's side have become the apple of many a neutral Italian football fan's eye this term, producing exciting, high-scoring football, with the likes of Serie A top-scorer Ciro Immobile and former Liverpool youngster Luis Alberto impressing.

But there is no doubt that Milinković-Savić, nicknamed “the Sergeant”, is the star of the show.

In his box-to-box role at the heart of the Lazio midfield, Milinković-Savić is all things: he is ball-winner and creator, physical powerhouse and refined goal-scorer. Simply put, there is little the 23-year-old cannot do.

At 6ft 4ins and adept and using his size to good effect, Milinković-Savić is a match for any would-be midfield enforcer, evidencing his ball-recovery skills with a combined tackles and interceptions average of 2.83 per 90 minutes in 2017/18 – higher, for instance, than more experienced Serie A peers Radja Nainggolan of Roma (2.28) and Juventus' Sami Khedira (1.96).

He also employs his frame well when protecting possession, positioning himself cleverly between ball and opponent, which, when married with an immaculate touch and surprising speed over short distances, makes him a remarkably effective dribbler, completing 1.71 take-ons per 90 this term.

Above all, Milinković-Savić is a wonderfully intelligent player, mastering space in the manner of a much more experienced playmaker. This serves the Serbian international well both when it comes to scoring and creating. 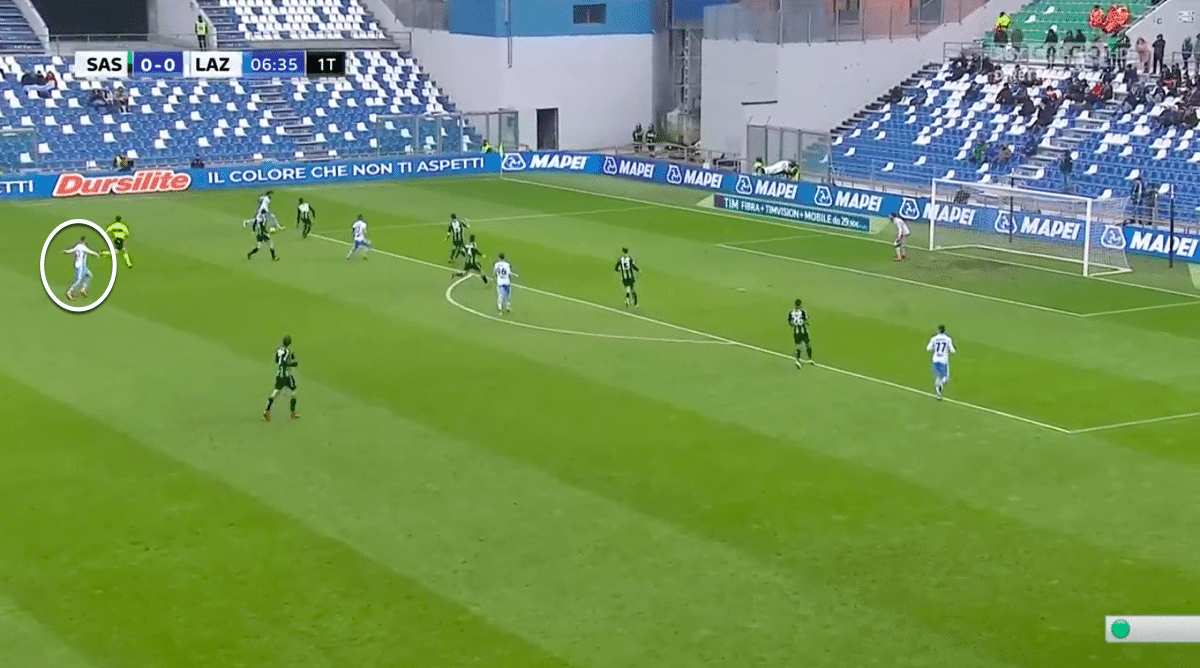 Above, from a recent Lazio victory over Sassuolo, we see Milinković-Savić's spatial awareness in the lead-up to the first goal of his brace. As play progresses down the left flank with Brazilian winger Felipe Anderson, the midfielder holds back slightly, allowing a gap to open up between himself and the retreating Neroverdi backline. 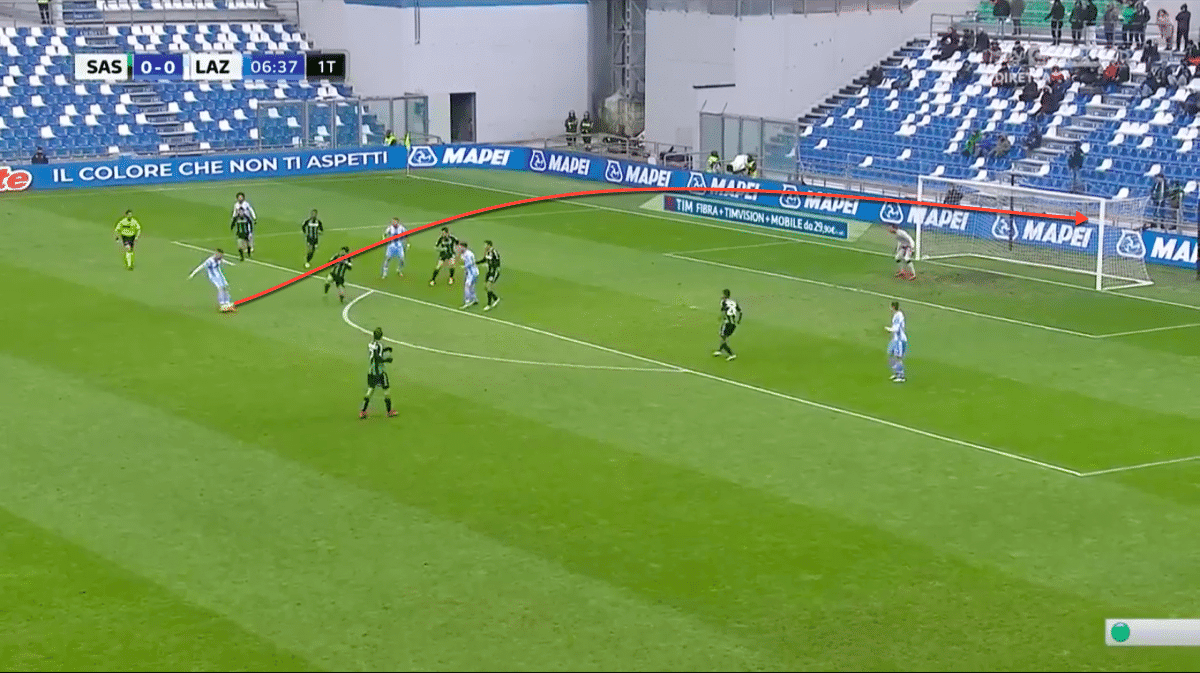 Having called for and received the ball on the edge of the Sassuolo box, he takes one touch before unleashing a sublime, dipping strike into the top corner, proving his technique more than matches his physical and mental attributes.

His second goal of the game, however, demonstrated Milinković-Savić's ability to switch between the sublime and the forceful at will. 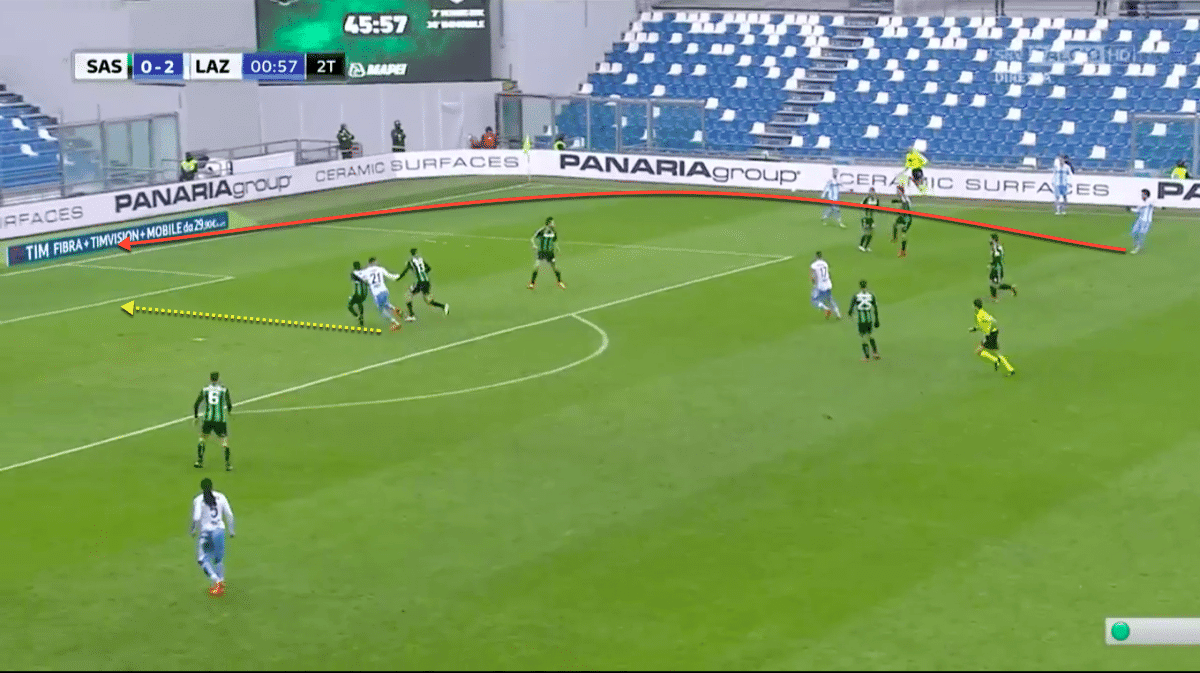 With Felipe Anderson again on the ball, this time on the right flank, Milinković-Savić demands a cross from the Brazilian and he makes his way into the penalty area, undeterred by the close attention of two Sassuolo defenders. 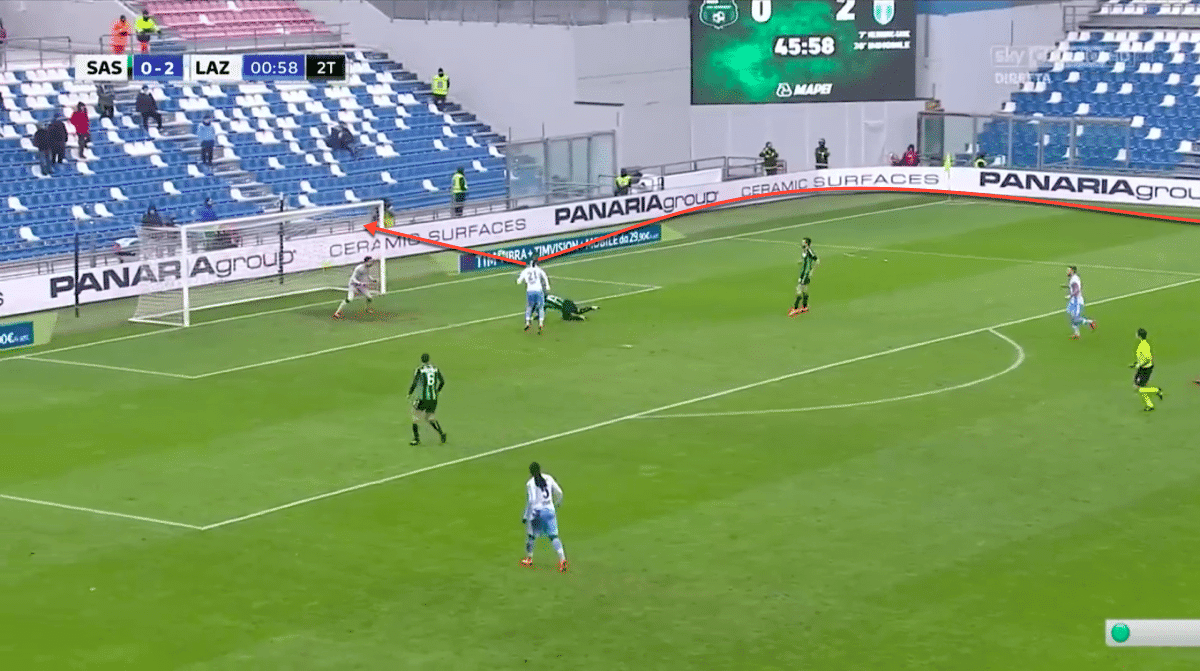 When the ball arrives, there is only one winner, as the powerful Serb outmuscles both opponents and drives his header firmly beyond the helpless goalkeeper.

There is a third facet to Milinković-Savić's brimming attacking arsenal, too: subtlety. A master operator in tight spaces with the vision to quickly assess his options and make sound decisions, the young midfielder shares many attributes more associated with a No.10, able to employ the art of misdirection to trick an entire defence into unfurling before him. 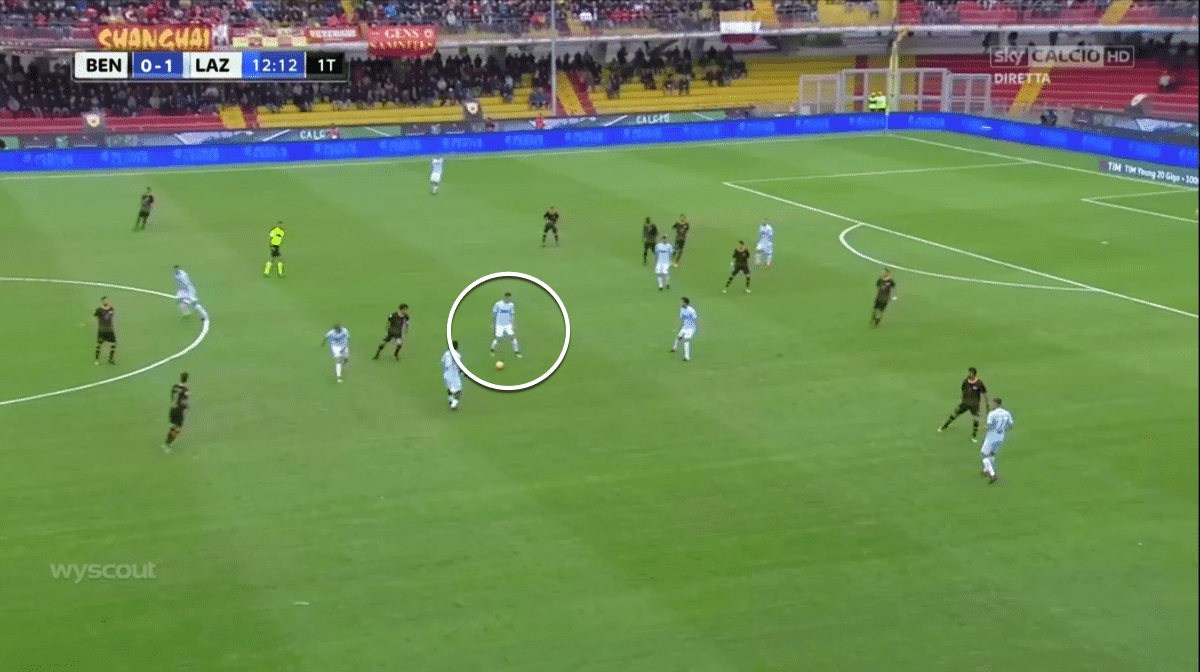 The above image shows Milinković-Savić receiving the ball into feet in a congested central area. There may not appear to be any great danger posed to the Benevento backline, but the Lazio star is one step ahead of everyone, with a clear picture in his mind of what he is about to do. 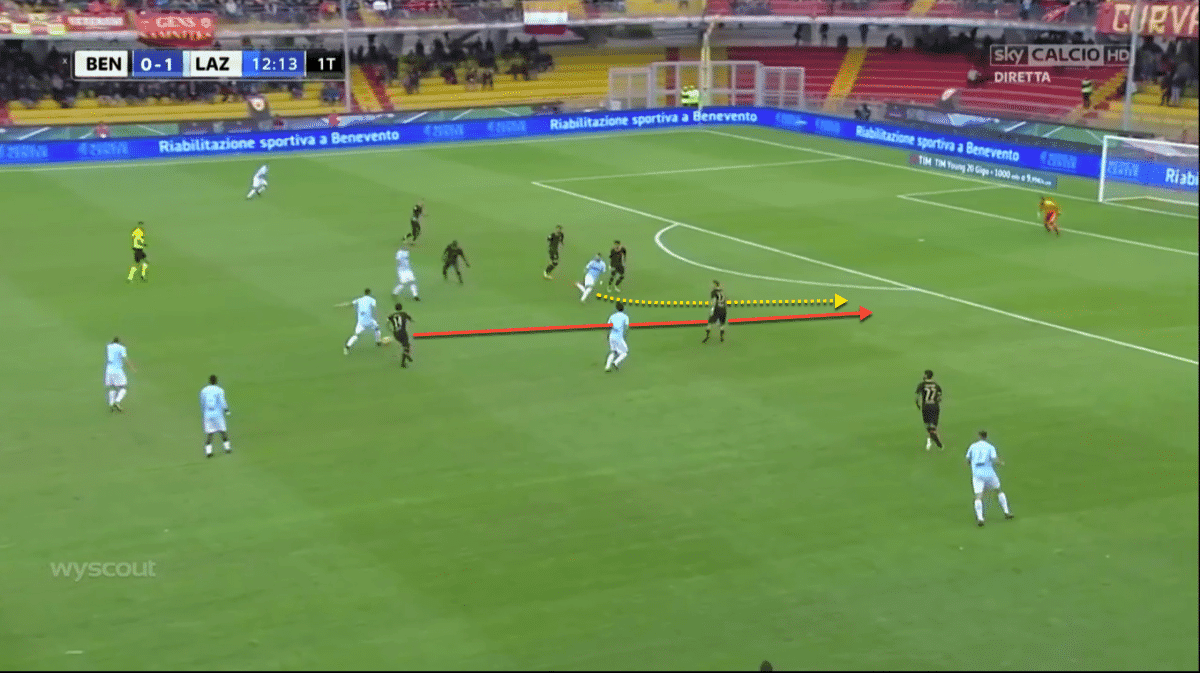 Quickly shifting the ball out of his feet and having already identified the run of striker Immobile, anticipating the destination of the Italian hitman's movement, using the outside of his boot to disguise his intentions, Milinković-Savić threads a sumptuous pass between multiple defenders to play his colleague through to score.

With the ability to transition quickly between phases becoming more and more crucial at the elite level, it makes perfect sense that the continent's biggest sides are chasing Milinković-Savić; he is the perfect transitional midfielder, owing to his ball-progression ability.

Combining press-resistance with dribbling, long-range passing technique and vision, few midfielders in the world turn defence into attack as quickly. 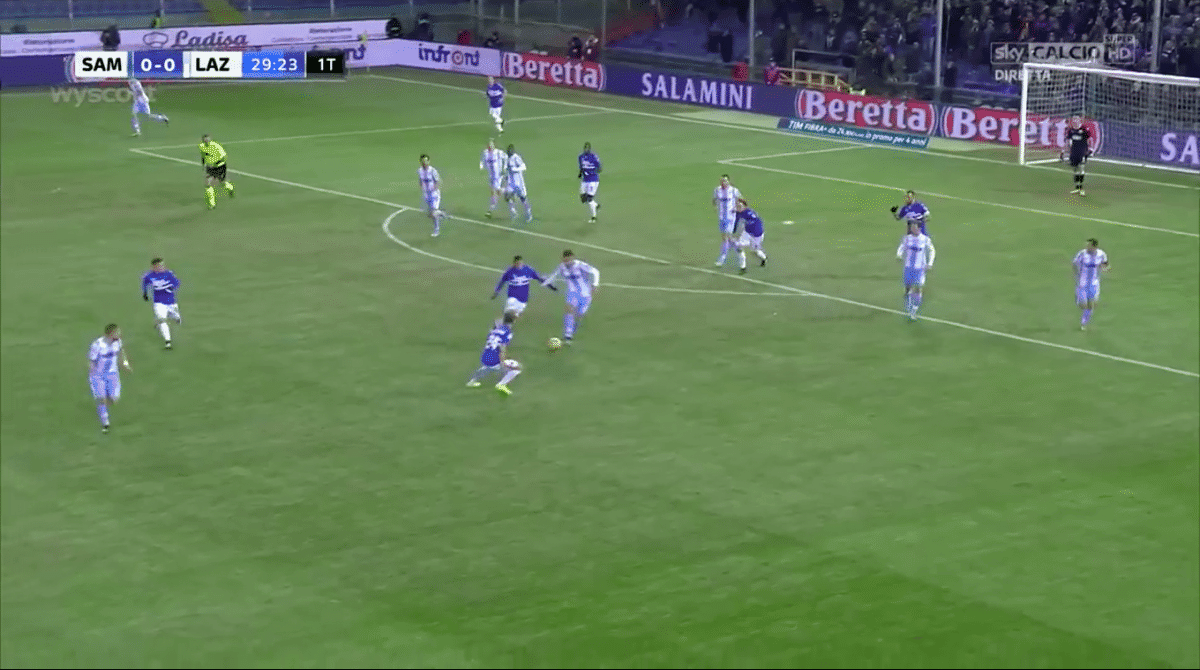 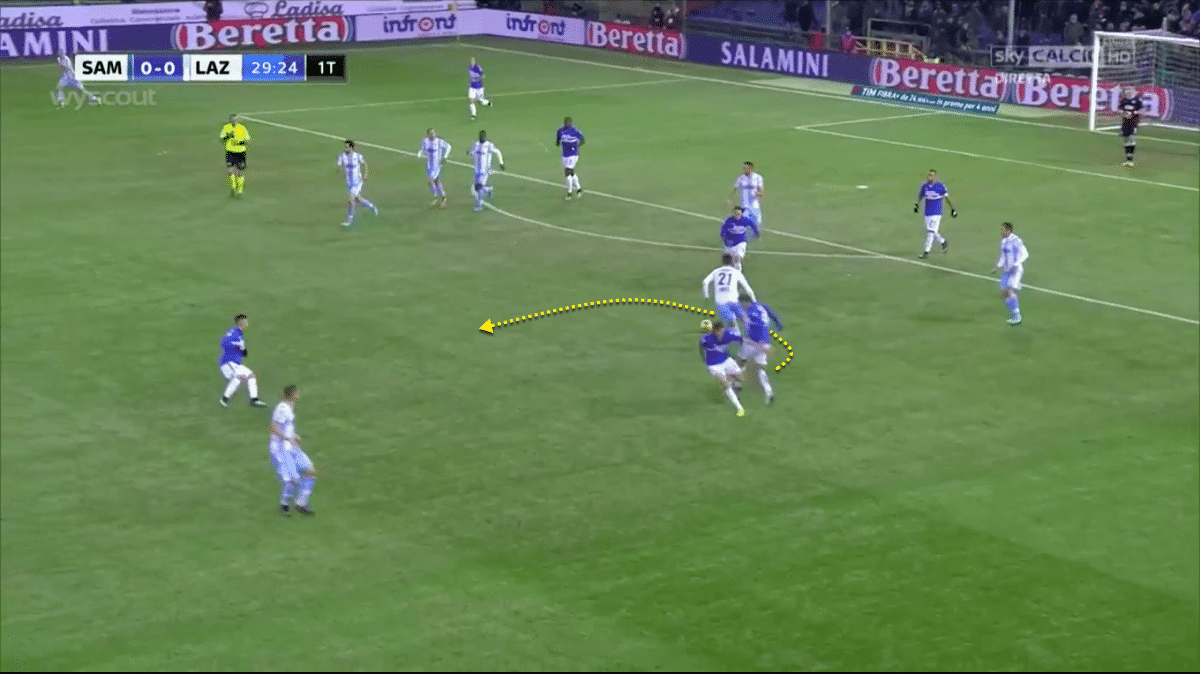 Here, we see Milinković-Savić receive the ball just outside the Lazio penalty area in a game against Sampdoria earlier this season. Immediately put under pressure by two opponents, he outfoxes and outmanoeuvres his adversaries with a swift turn back inside, into a pocket of space. 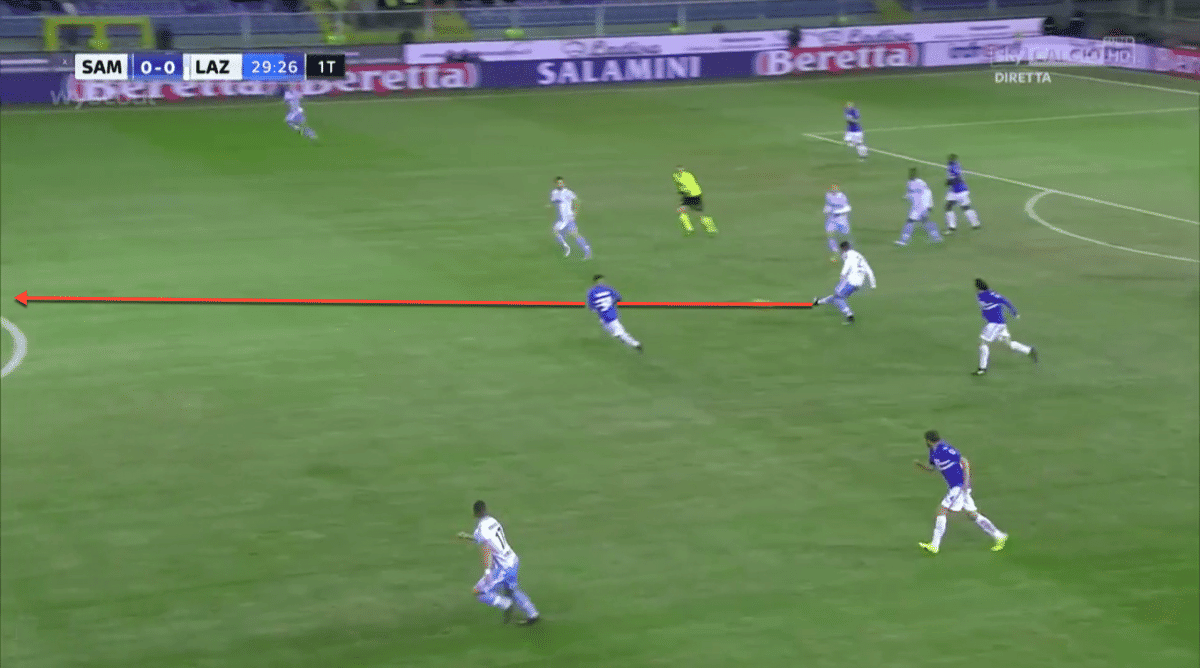 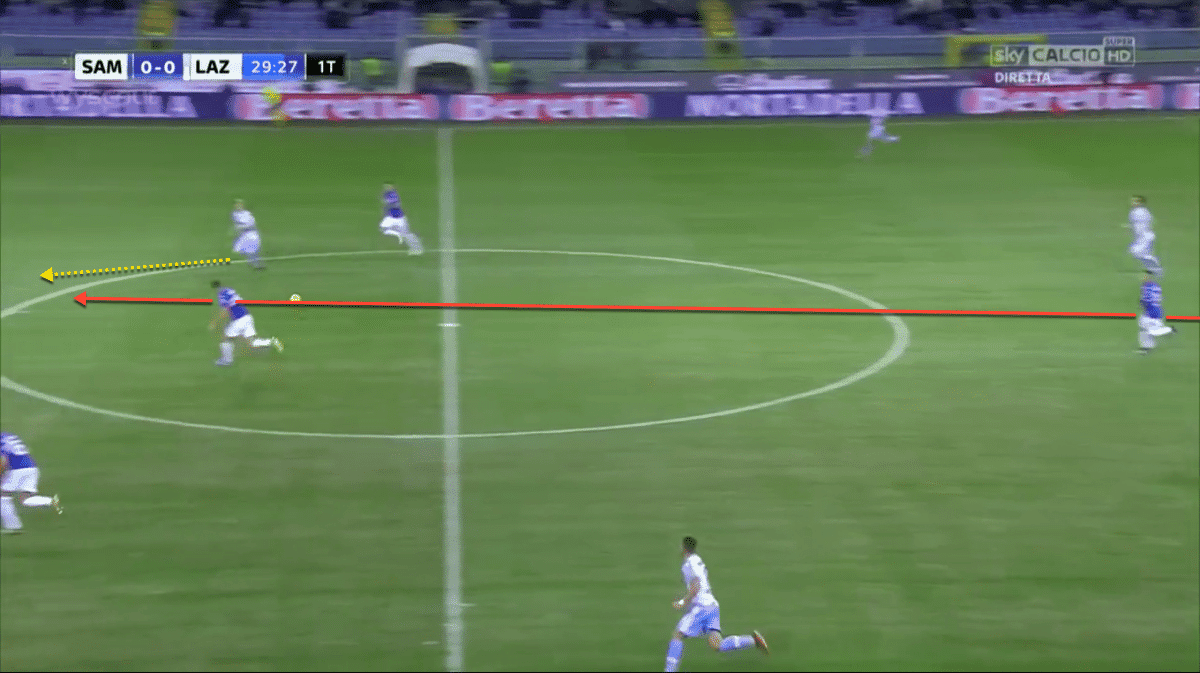 What comes next is even more remarkable. Sampdoria are already retreating, well aware of what the man on the ball is capable of, as too are his team-mates. Spotting the run of an advancing colleague inside the Samp half, Milinković-Savić executes a stunning, chance conjuring 40-yards through-ball; from hassled in the defensive third to through on goal in the blink of an eye.

Such creative instincts mean the Lazio man is averaging more open-play key passes per 90 minutes (1.51 to 1.22) and creating more big chances per 90 (0.33 to 0.21) than Manchester United‘s Paul Pogba, whose previous development at Juventus has been likened to Milinković-Savić's current rise in Serie A.

Like Pogba two years ago, Milinković-Savić could be about to depart the Italian top flight for a record fee – and he may yet even join the Frenchman at Old Trafford in the Red Devils' reported interest is significant.

Wherever he lands, or even if he stays in Rome for a little longer, Milinković-Savić is on course to conquer.