Lazio midfielder Sergej Milinković-Savić is a transfer target for Liverpool. The Reds had high hopes for the summer window but negotiations with a number of potential signings have stalled over the past week.

There's a stand-off with Roma over just how much Mohamed Salah is actually worth. Liverpool are refusing to meet the Serie A club's valuation while new Director of Football in Rome Monchi isn't one to be bullied.

Interest, publicly at least, in Southampton's Virgil van Dijk has ended after allegations of tapping up. However, recent reports have implied that the onus is on the Dutch defender to push through a move.

If this happens Liverpool will no doubt have to be prepared to pay more than they had originally planned to smooth over those negotiations.

While Fenway Sports Group have promised to back Jürgen Klopp in the market the German doesn't have an unlimited budget at his disposal. If the Reds have to part with more money to secure the services of the Dutch defender then it means the difference will be made up elsewhere.

This is, perhaps, why the Merseyside club have turned their attention to the Serbian powerhouse. Milinković-Savić could be seen as a cheaper alternative to RB Leipzig midfielder Naby Keïta.

According to Corriero dello Sport, Liverpool had a €28million bid turned down by Lazio for the midfielder. The Rome club value him at closer to the €70million mark. It's the second bid the Serie A side have rejected from Liverpool in the space of the week after dismissing a £17million offer for Stefan De Vrij.

While the two teams are some distance apart in their valuation of Milinković-Savić there must be a sense that it would be cheaper to get him to Anfield than Keïta otherwise the Reds wouldn't have dropped interest in their top midfield target.

At first glance it's an odd comparison. Keïta, standing at 5ft 7 inches, is a combative all-action midfielder while Milinković-Savić, who measures in at 6ft 3 inch, comes across as a cultured, refined presence at the heart of the midfield.

However, if you scratch below the surface you'll find there are similarities between the two and why, if Liverpool have given up on Keïta then, the Serbian could be next in line.

Their styles may look completely different with the Guinean international appearing to be a bit of a busy body on the pitch, whereas the 22-year-old Lazio man comes across as a bit more relaxed.

He makes up ground a lot quicker than his RB Leipzig counterpart due to his height meaning it looks effortless for him.

Beneath it all though, the two midfielders are both all-rounders and amongst the best playing in Europe right now. 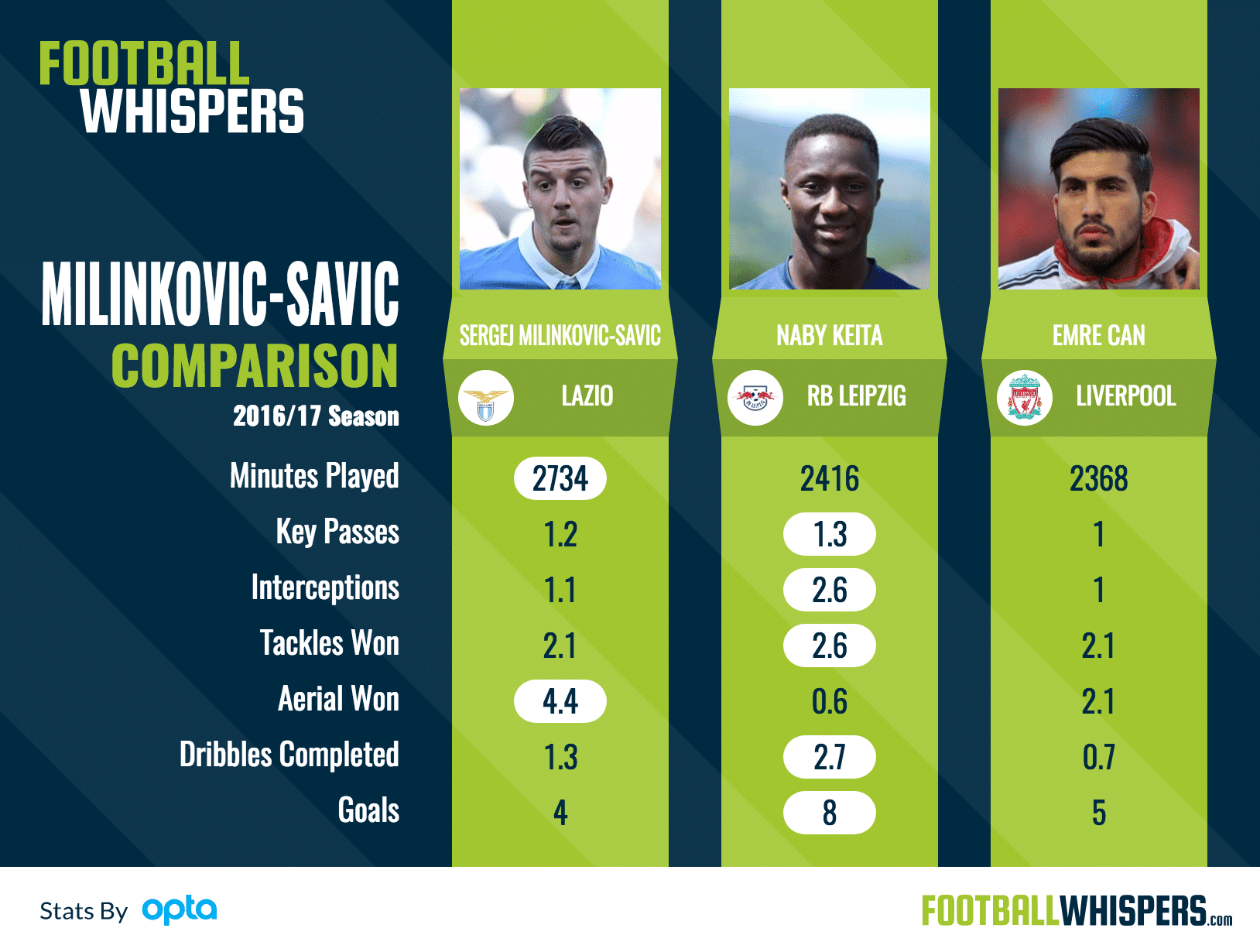 Milinković-Savić played as a centre-midfielder for the most part but was more of a box-to-box one. He was occasionally deployed in an attacking midfield role and has played as a defensive midfielder too. That sort of flexibility is key in a Klopp system.

Keïta played in a box-to-box role in a midfield too but was occasionally used as one of the two behind the strikers. Like the Lazio man, he can play a number of positions.

Both are effective in transition. They can stop an opponents attack and start one of their own with two simple touches. They're incisive on the ball, proactive in possession and brave. Milinković-Savić plays this outside of the foot pass which is eerily similar to the one Steven Gerrard was associated with.

He may not be the alternative to Keita. He could in fact be the Emre Can replacement. The German is still yet to sign a new deal with the club and has just the 12 months remaining on his current contract. It's why the former Bayer Leverkusen man has been included in the comparison graphic.

It's worth noting when comparing his stats to Can and Keïta that all three played different roles and had various responsibilities.

Having said that though, the fact the Serbian wins 4.4 aerial duels per 90 minutes is definitely a tick in the box. Against the more physical sides Klopp would have Can drop a little deeper and use his new found aerial ability to help nullify the threat. The Lazio man could comfortably execute that tactic.

Milinković-Savić is an intruguing prospect. He caught the eye of many during Serbia's U20 World Cup win in 2015 before his move to Lazio the very same summer.

His impressive form in Serie A has seen him linked subject of Juventus, Chelsea and Manchester United transfer rumours. He's exactly the sort of talent Liverpool should be courting but they should be doing so before the move to a Lazio tier club.

They moved quickly with Marko Grujic and he cost a fraction of what it would cost to secure his compatriot now. However, if the Merseyside club are serious about bulking up their midfield then he's ideal.

In theory, he could play in a two alongside or in place of any of Can, Henderson or Gini Wijnaldum. He could comfortably play in the midfield three that was used last season in a variety of roles.

If the Reds are able to broker a deal with a lot of add-ons then switching from Keïta to Milinković-Savić could be a shrewd bit of business.