Last summer, Sergej Milinković-Savić was one of the hottest properties in Europe. The Serbian midfielder was linked weekly with moves to the likes of Manchester United, Real Madrid and Juventus.

Slapping a £100million-plus price tag on their prized asset, Lazio managed to fend off the advances of Europe's elite to keep hold off the gifted 23-year-old.

Seen as one of the biggest transfer wins of the summer, Lazio's retaining of Milinković-Savić was supposed to springboard the Biancoceleste on to greater things this term, building on their fifth-placed finish of last season to make a push to crack the top four.

But, as the Serie A season shut down for its winter break, in the time of year when the mid-season market leads to another frenzy of transfer speculation, all is quiet when it comes to Milinković-Savić. With just three goals and one assist to his name from 18 Serie A appearances, talk of a blockbuster switch to a European giant has gone silent.

Impressing with his physicality, touch, vision and technique, Milinković-Savić drew comparisons to former Juve star Paul Pogba and was tipped to eventually eclipse the Frenchman to become Italian football's most costly export.

He was also picked out as one of the potential stars of last summer's World Cup in Russia, yet he and his Serbian colleagues struggled to impact the tournament in a meaningful way.

Returning to club action for the 2018/19 season, the scoring touch Milinković-Savić had exhibited previously appeared to have deserted him, with his first goal coming in late September, a powerful header in a 4-1 win over Torino which would not be added to for a further 11 league games.

It was perceived the young midfielder also lacked the drive through the middle third which had marked him out last season, unable to wrestle control of games and bend them to his will – as he had done so often for Lazio in 2017/18, manifesting comebacks and late victories through his sheer force of will and skill.

Indeed, in October, Lazio fans were so outraged by the performances of Milinković-Savić and team-mate Luis Alberto that they unfurled a banner at the Stadio Olimpico dubbing the pair “fake talents out for money”.

However, although the headline numbers – his drop-off in goals and assists – signify a player desperately out of form compared to the year before, Milinković-Savić's underlying statistics suggest there is little change in his performances, and that he could soon be back to his best. 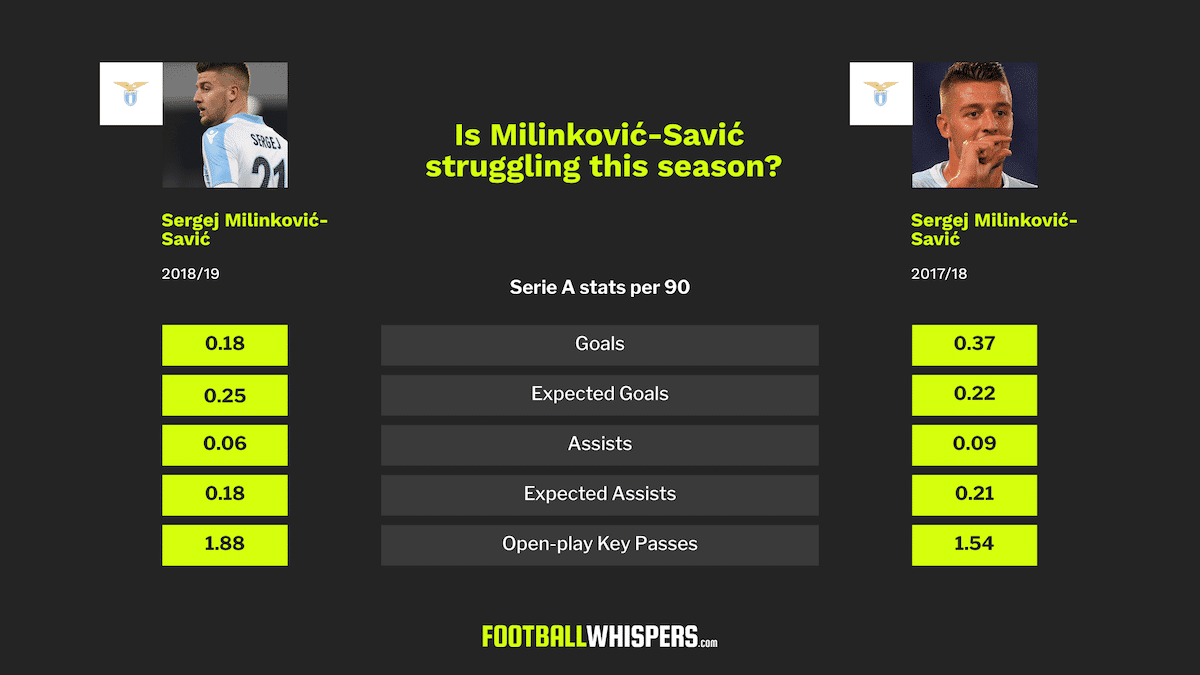 When it comes to creativity, he is operating at pretty much the same level. Last season, he averaged 1.54 open-play key passes and 0.21 expected goals assisted per 90. This term, those figures are 1.88 and 0.18 respectively, so a solid increase in the former category and a marginal decrease in the latter.

The most startling drop-off Milinković-Savić has suffered this season is in his goals output, though, but this also offers little cause for concern upon deeper inspection.

His expected goals (xG) average – which measures the quality and frequency of chances a player receives – has remained stable, 0.25 xG per 90 this season from 0.22 last term. And the fact he is shooting more frequently – 3.21 times per 90 from 2.87 – suggests his confidence has not been affected by his lack of goals.

However, last season Milinković-Savić greatly outperformed his xG, scoring 12 goals from an xG of 7.11. The post-shot xG model – which takes into account the placement of each shot when determining how likely it is to lead to a goal – helps us understand whether such over-performance is sustainable or a more a matter of luck.

With a post-shot xG total last season of 9.6, we see that Milinković-Savić's high goals return was both a result of highly accurate shooting and a degree of variance that might not be repeatable.

This season, his attempts on goal have been less accurate, with his post-shot xG total of 3.95 showing that his shooting has been sufficiently wayward to decrease the value of the chances he is receiving.

However, twice a scorer with precise efforts in his final two games in December – one a first-time, instinctive left-footed finished from 15 yards, the other a thunderbolt from outside the area with his stronger right foot – it seems Milinković-Savić has found his shooting boots once again.

So, what has gone wrong for Milinković-Savić this season? Well, not a whole lot. And his pre-winter-break form suggests one of Europe's most gifted midfielders has rediscovered his groove.