There is little doubt Suso's decision to leave Liverpool in 2015 was the right one.

The Spaniard, just 21 when he departed Anfield, has gone on to excel in Italy with Milan. And his development over the last few years may well earn him a return to the Premier League.

If Suso, as reports suggest, joins Arsenal or Tottenham in the summer he will not expect to be a bit part player. He has done enough at Milan, particularly this season, to prove that he would be a valuable addition for top English club.

At Liverpool, Suso’s potential was clear. He was quick, creative and technically gifted. But he did not quite have enough to break into the first team and left for Milan in 2015 for just £1million.

That has proven to be a bargain fee, although Suso’s success with the Rossoneri has hardly been surprising. He had an enviable education at Liverpool and showed promise when given opportunities in the first team.

“In a sense I became a man before I became a footballer,” Suso said last year on his time in Merseyside. “It was very hard with the lifestyle and language.

“But to this day I remember everything. I did not play that much but I got to know Steven Gerrard and be a teammate of players such as Luis Suárez, Philippe Coutinho and Jamie Carragher. I’ll never forget that.

“Premier League football is different, I would call it special. I would like to play for Liverpool again someday. I grew up there and it is a big club.”

Whether he will ever return to Anfield remains to be seen. But there is certainly interest from clubs around Europe, most notably Arsenal and Tottenham.

They will, no doubt, be aware that Suso, still only 25-years-old, has a release clause in his contract of €40million. They will be aware, too, that Suso has been one of Serie A’s most impressive attacking players this season. 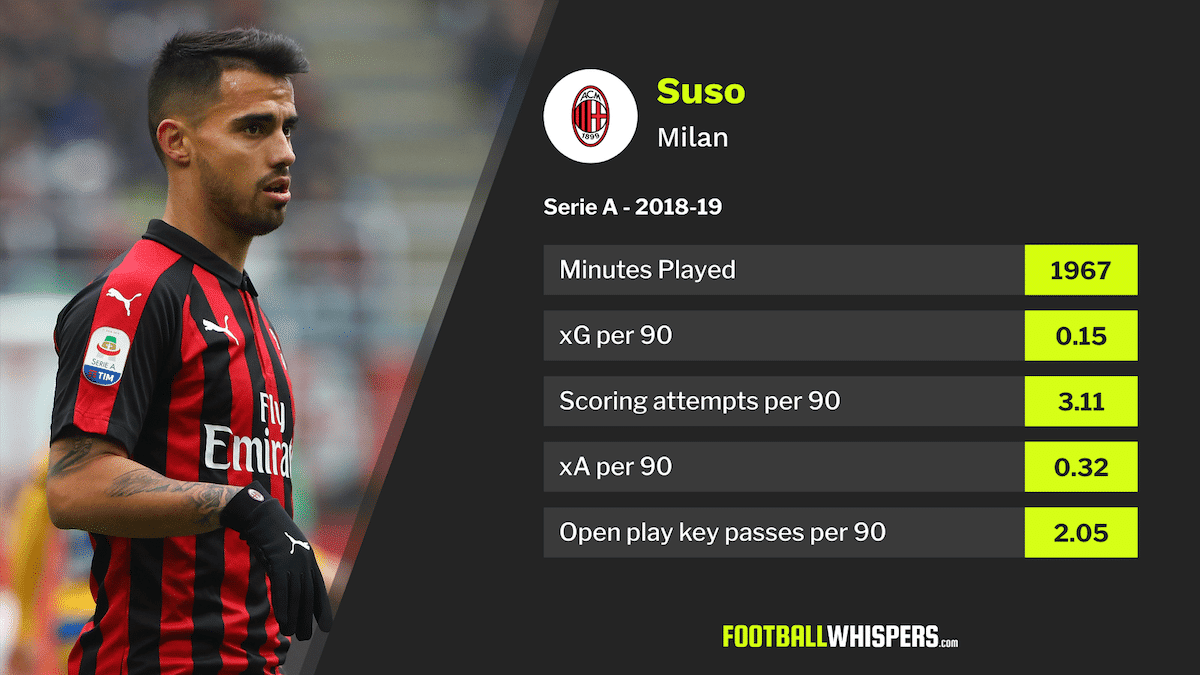 His performances have helped Milan to fourth place and – though it remains incredibly tight in the battle for the top four – a potential return to the Champions League.

Few players in the division have been as creative as Suso, whose total of eight assists from 22 league appearances – at a rate of 0.36 per 90 minutes – is matched only by Cristiano Ronaldo. He also ranks in the top ten attackers for key passes from open play – 2.05 per 90 – and big chances created – 0.45 per 90.

Gonzalo Higuaín, before he departed for Chelsea last month, was often the beneficiary of Suso’s vision in the final third, while Patrick Cutrone has seven goals to his name in all competitions.

“It’s a special thing to have Cutrone on the pitch,” Suso has said. “I always know where he is.”

But Suso is not in the team solely to provide for others. The Spain international has six goals to his name so far this season and that, combined with his number of assists, makes him by far the most productive attacking player in Milan’s team.

It is little wonder he has attracted interest. Suso has become almost indispensable for Milan, establishing himself as perhaps the club’s most important, most consistent player.

If he continues in his current vein of form for the remainder of the season, that €40million release clause will begin to look increasingly tempting for any interested parties.

Arsenal are likely to be in the market for a player of Suso’s mould, with Mesut Özil on the way out and Henrikh Mkhitaryan underperforming. Tottenham, too, despite their recent inactivity in the transfer market, are expected to strengthen in attack.

There has, though, been talk of a contract extension at Milan, and Suso certainly appears to have enjoyed his time at the club. “I’m happy here, as are my family, and that’s where I want to stay,” he told Gazzetta dello Sport earlier this month.

“I also turned down so many offers last summer. Owners, coaches and some very good players have come and gone, but I’ve always been here. We’re talking about my extension serenely and we’ll keep doing that.”

Milan fans will certainly be hopeful that a deal is agreed sooner rather than later. Perhaps the prospect of Champions League football – if Gennaro Gattuso can guide his side to a top four finish – will convince Suso to stay.

Without it, though, he may be tempted to seek out a new challenge.