Krzysztof Piątek was signed to fire AC Milan into the Champions League. With one game of the Serie A season left to play, the Rossoneri find themselves in fifth position, a point behind neighbours Inter.

Gennaro Gattuso’s men have won three on the bounce to breathe life back into their top four pursuit just as it appeared as though it might be over following a dismal run of form.

The 2-0 win over Frosinone means it will all hinge on the final game of the 2018/19 campaign. Milan travel to SPAL 2013 while Inter, dismantled by Napoli on Sunday, host Empoli.

There’s also a possibility the Milan clubs make it into the Champions League if both win and Atalanta fail to beat Sassuolo. However, one thing's for sure next weekend; Milan need maximum points.

Piątek heads into the final showdown having netted once in his last six Serie A outings. After the initial burst, which saw him score seven in his first five starts, the Poland international has struggled.

In the 12 Serie A appearances since he’s found the back of the net on four occasions. With Milan’s downturn in form coinciding with this, many have started to heap more pressure on the 23-year-old.

Re: Piątek. Something I spoke to Bobo Vieri about – judging strikers too early. How many have had that one season wonder and never be able to replicate that success? Do it over the course of a few seasons first to be properly judged.

It’s only natural, of course.

As soon as the goals dry up, everything is put under the microscope. But Piątek’s game was always built on him being an elite chance-getter. That, coupled with his finishing ability, meant a team with him in the starting XI the team had one of the most dangerous men in Europe at their disposal.

If Milan wanted more of an all-rounder, they should have signed one. They didn’t. So now they need to cater to what the former Genoa man is good at.

Gattuso’s men haven’t been doing that.

On average, he's now taking 1.76 fewer shots on a per 90-minute basis and 1.1 fewer shots inside the box. He's averaging five fewer touches in general and he was having 1.21 more in the opposition's penalty area when playing for Genoa.

You can see it in the touch map above, too.

There's a high volume of touches in the area in the left graphic. Something that can't be seen in the right one. Because of this, Piątek’s expected goals average has dropped by 0.14 per 90. It may not seem like much but over the entirety of a season that is close to a six goal difference.

His scoring rate has inevitably also declined. The 0.73 he managed with Genoa is now down at 0.62 for Milan. However, he has continued to outperform his expected goals average, even more so since the move to the San Siro. The fact his shot accuracy is up by over 10 per cent has perhaps helped. With chances hard to come by he's having to make the most of those that do come his way.

In many ways, the Milan No.19 is holding up his end of the bargain. He's making the most of the very little service he's getting. 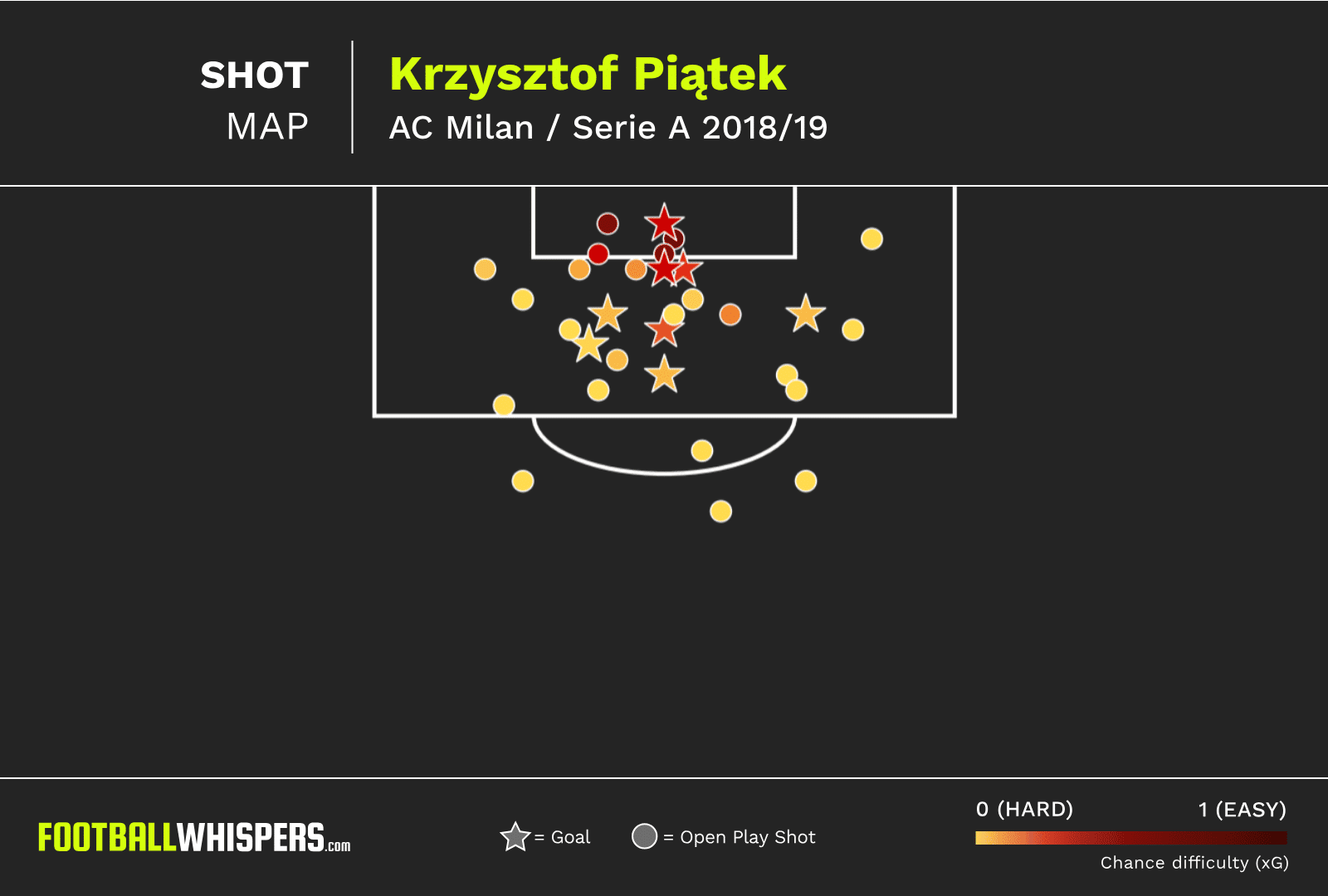 But it isn't just his output which has taken a hit. His general play is suffering because of the Milan system.

He's competing for fewer aerial duels (4.5 down from 6.6), making fewer passes and, perhaps more alarmingly, Piątek is no longer as progressive when in possession. While with Genoa he played, on average, 20 per cent of his passes forward. Since the move to Milan, that figure has dropped to nine per cent.

You can't blame the forward for this, either. The way in which the Rossoneri are set up just doesn't cater to his needs. For example, very few players make runs beyond him. The creativity in the team comes from Suso and Hakan Çalhanoğlu and while they can both deliver, they don't really play the odds.

Since Piątek joined, the latter has averaged 2.22 shots from outside the penalty area on a per 90 minute basis, while Suso averages 1.6. To show for all of these shots from distance, the pair have a combined two goals.

A simple solution would be to instruct both to take fewer shots from distance and instead look to work the ball into the area.

If Piątek is to be a success for Milan, the team need to start to play to his strengths. He has the ability to be the difference between playing Europa League football and playing in the Champions League.

When you have a player who is that much of a game-changer, you do everything to ensure they're given the tools required to be at their productive best. In that sense, Gattuso has failed. He has a week now to right that wrong and to give Milan their best chance of playing in Europe's elite club competition once again.