There’s a feeling of déjà vu around the Anoeta stadium. The poster boy for this Real Sociedad team is a young, left-footed, versatile forward blessed with superb off the ball movement and calmness when inside the opposition’s penalty area.

La Real fans could be forgiven for thinking they’ve seen this film before.

While Mikel Oyarzabal is not an Antoine Griezmann doppelganger, he does share a lot of similarities with the World Cup winner.

Both came through the ranks at Real Sociedad. Both impressed enough at youth level to be given an opportunity in the first-team. Both then evolved into the main man for their respective team.

Despite agreeing a new deal in August to ward off interest from rivals Athletic Bilbao, the 21-year-old’s form could see the big clubs come knocking when the season comes to an end. The new contract reportedly saw his release clause rise from €60million to €80million.

It’s not loose change but a number of Europe’s elite could comfortably afford that. And with Oyarzabal showing what he can do for a second successive season, teams across the continent might now realise he’s getting closer to being the finished product.

Wide forwards are in high demand at the minute. Lille's Nicolas Pépé is rumoured to be a Bayern Munich transfer target and reports claim Bundesliga giants are prepared to sign off on a package in excess of €80million to land the soon to be 24-year-old.

Europe's elite rarely make a move for a player after just one good season and that is why the 2018/19 campaign was an important one for Oyarzabal.

He's followed up his 12 strikes last season with eight this year. A wide forward who can hit double digits in the league is a valuable asset for any team, the fact the 21-year-old has managed it playing for a midtable club is even more impressive. 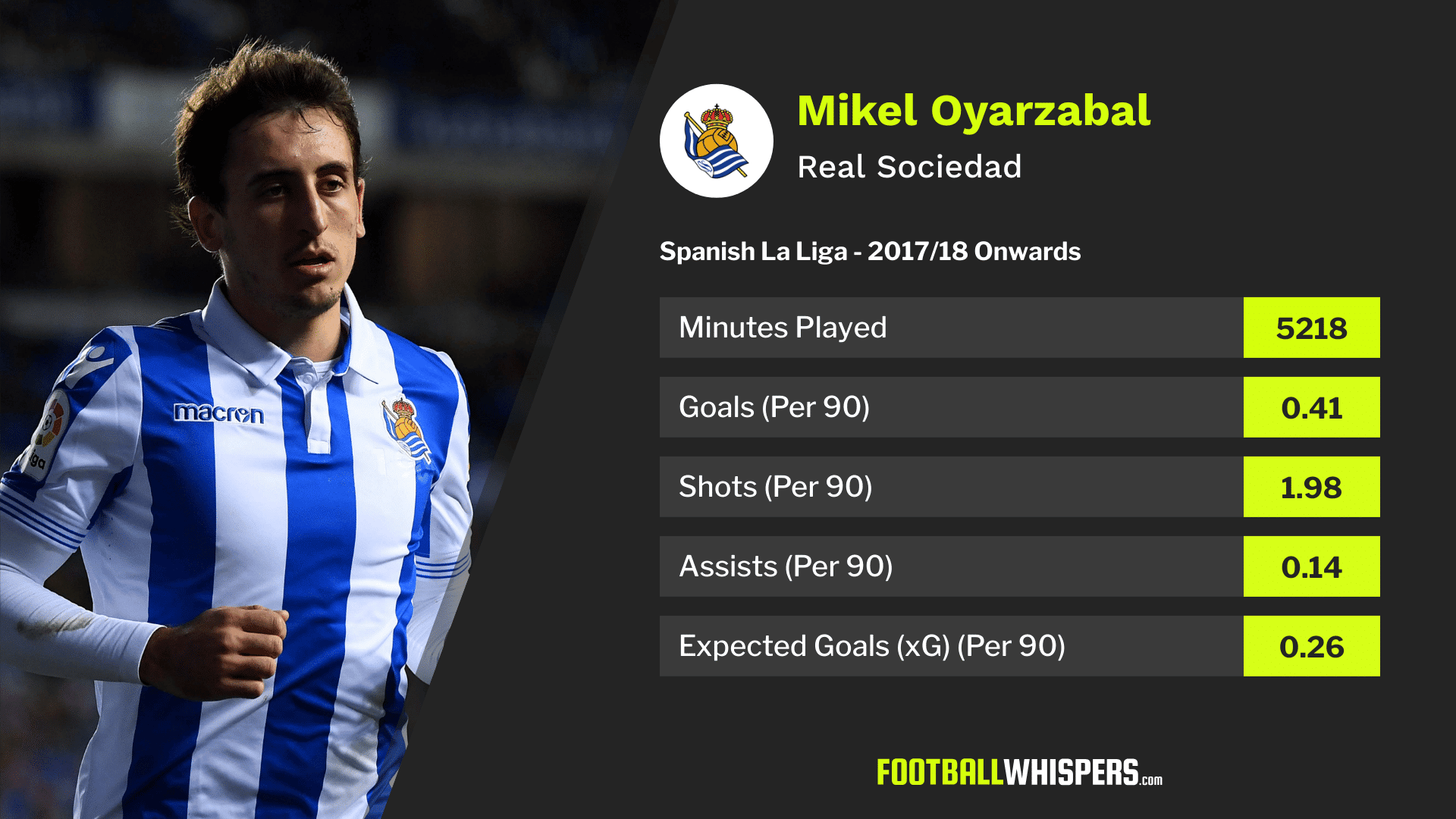 But when you watch him play it's obvious as to why he's such a reliable goalscorer. Adept at playing anywhere across the front line. he's dangerous when carrying the ball but it's when he's out of possession that you get to see his real quality.

He's always eager to get beyond the striker and into the area. He's clinical when in the box, adding real value to his efforts as highlighted by his goal average exceeding his xG average. 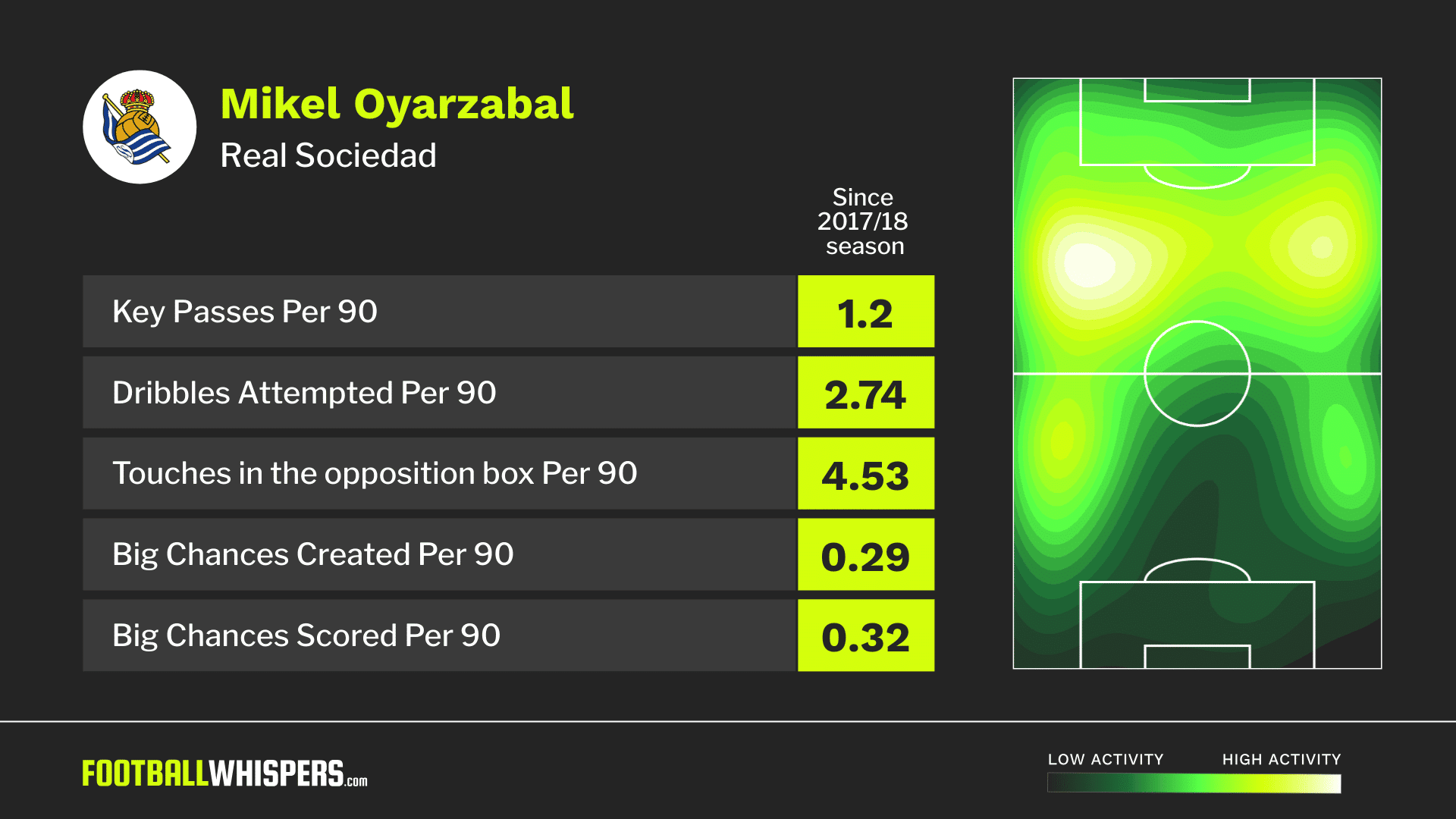 He's not just a goalscorer, however. On a per 90 minute basis he's averaging 1.2 key passes and attempting 2.74 dribbles. Not only can he carry the ball and beat a man, but he can also bypass defensive lines with his exceptional vision and his incisive passes.

He's unpredictable but can be counted on to deliver something special. Whether it's a 30-yard volley, a clever finish from close range or an expertly guided header into the bottom corner. He's a player who thrives under the pressure of performing.

The heatmap above shows just how versatile he is as a forward. Though he's primarily left-footed, he's not averse to using his right foot, unlike many other forwards these days, and this only adds to his unpredictability.

He can beat a man on the outside as well as the inside no matter where he is on the pitch. 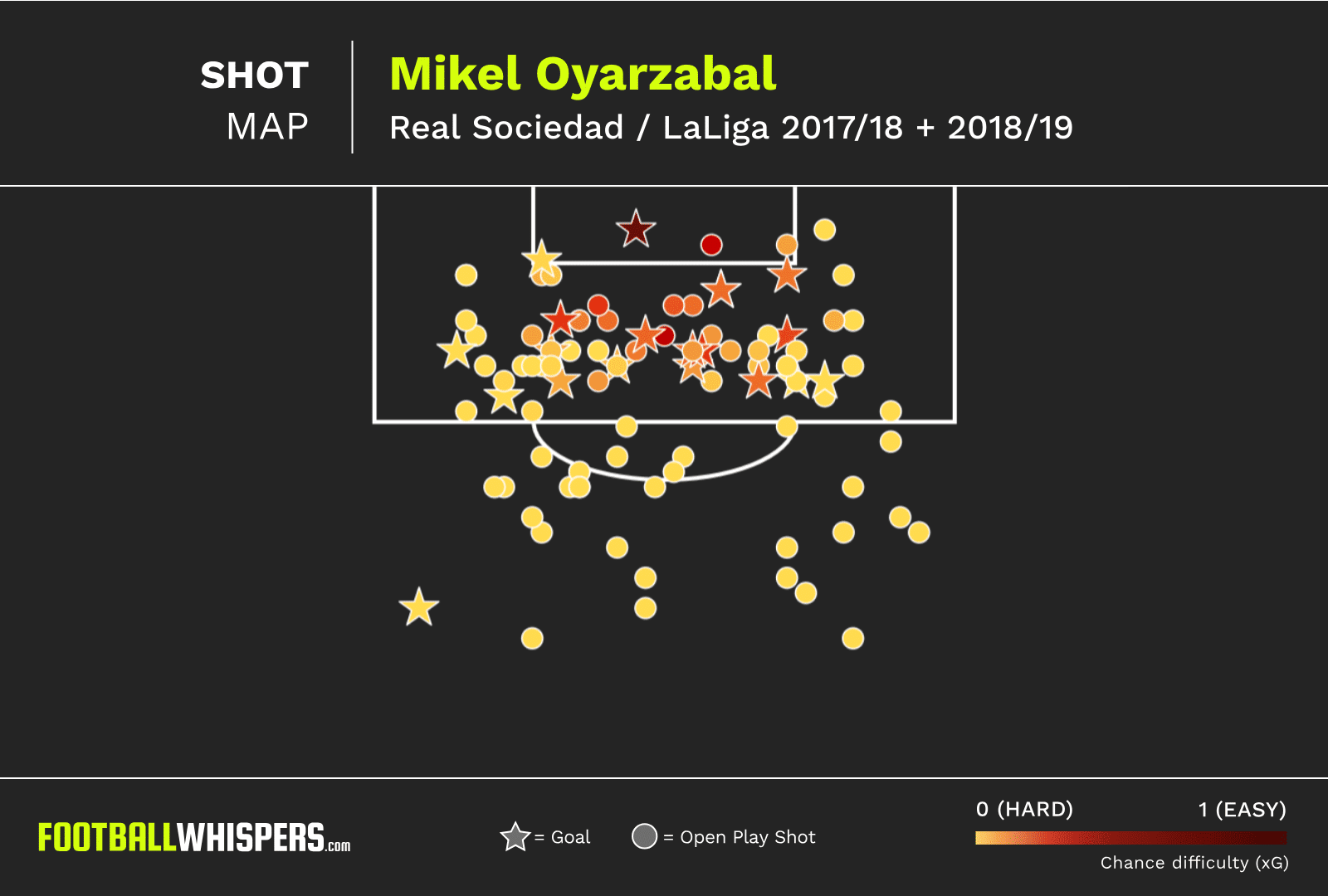 But perhaps what makes him so desirable is just how reliable he is. The shot map above shows all of the efforts Oyarzabal has taken over the past two seasons.

The first thing to note is there aren't many from outside the area. He's not a high volume shot taker and he's intelligent enough to know getting the ball into the box increases the chance of a goal. He's frugal with his shot selection.

The next thing to note when looking at this is just how consistent he is with his shots. He takes a large percentage from central areas and most of these are chances that would be considered to be easy according to the Football Whispers xG model.

They're only easy because he's got himself into these high-quality areas. It's a trait the best players in the world have and it's one of the reasons Oyarzabal's form is sustainable. It'll be a key reason behind why Europe's best clubs will want to add him to their arsenal.

It'll take a lot to eclipse Grizmann's achievements but there's no reason the 21-year-old couldn't match what the former La Real star has managed throughout his career.