Bayern Munich have caused Manchester City constant irritation throughout this summer; akin to the dull itch of a mosquito bite or sunburn.

The Premier League champions have tried to ignore their German counterparts, tried to get on with pre-season as normal and tried their Bayern repellent spray. But nothing has worked.

The Bavarians have remained in the background, prepared to speak to any German newspaper about their desire to sign Leroy Sané.“We all know Leroy Sané is our dream player,” Bayern boss Niko Kovač said earlier this summer.

“The public knows that, we know that. You can see the transfer is not easy. But I know that our people are working very hard to make it happen.”

City have no intention of selling Sané, something which has been emphasised by Pep Guardiola. And given Kovač made a public apology this week for the above comments, perhaps Bayern have finally got the message.

However, there remains cause for concern. Sané has just two years left on his contract and has shown little inclination to extend. Not even City can afford to risk losing the 23-year-old for nothing in 2021, so the club may have to cash in next summer.

That would leave a large hole to fill. Sané, when focused, is a devastating combination of pace and technique. He would be difficult to replace, but not impossible.

Which is where Mikel Oyarzabal comes in.

City have already been linked with the versatile Real Sociedad winger; his €75million buyout clause a fee well within the reach of the Premier League giants.

Their interest may have been parked with Sané set to stay at the Etihad, yet it would be a proactive move from the champions to have a deal in place with Oyarzabal for next summer.

He wouldn't stylistically be a direct replacement for Sané – whose raw pace with the ball is rare – should the German depart. However, he is a versatile attacking player, one capable of featuring on either flank or through the middle. 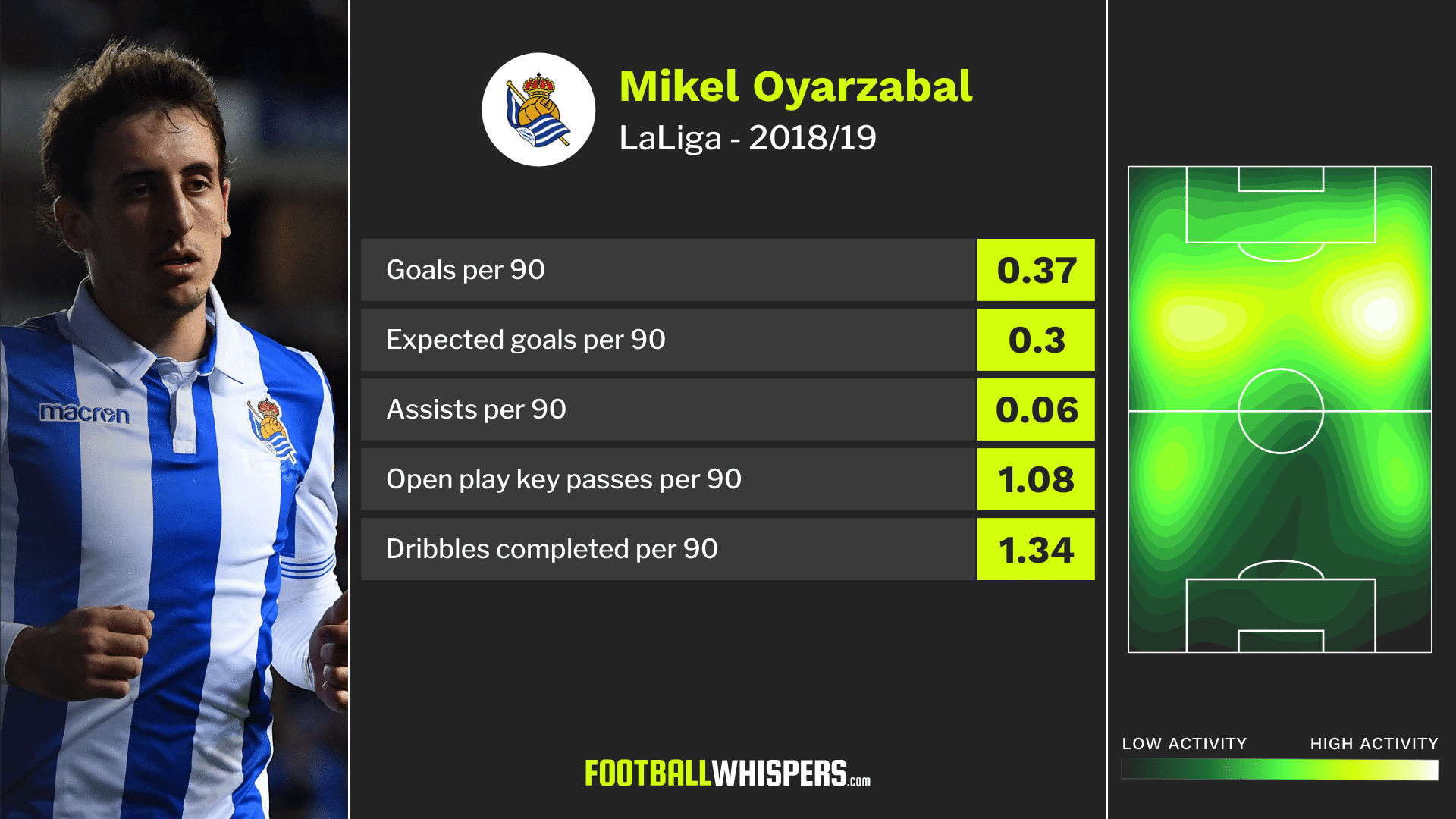 That is down to his well-rounded skill set. Last season in LaLiga the 22-year-old was among the top ten attackers in total passes, forward passes, open play key passes, big chances created, crosses completed, dribbles completed, interceptions and tackles completed. And that was for a Sociedad side that finished ninth.

It's no surprise then City have shortlisted Oyarzabal, who helped Spain win this summer's Under-21 European Championships, as a potential target.

He has been compared to Antoine Griezmann, another forward who began their career at the Anoeta. With the ball he can do the lot. Without it he is a tireless worker, prepared to press opponents and restrict space. And he can score goals, too, evidenced by the 25 he has bagged in the last two LaLiga seasons.

That fact that output exceeds his expected goals of 17.58 by some distance is not an issue. Firstly, top-level players tend to add quality to their shots and so score from unlikely positions. And secondly, as the shot map below highlights, Oyarzabal gets into dangerous positions in the penalty area on a regular basis. 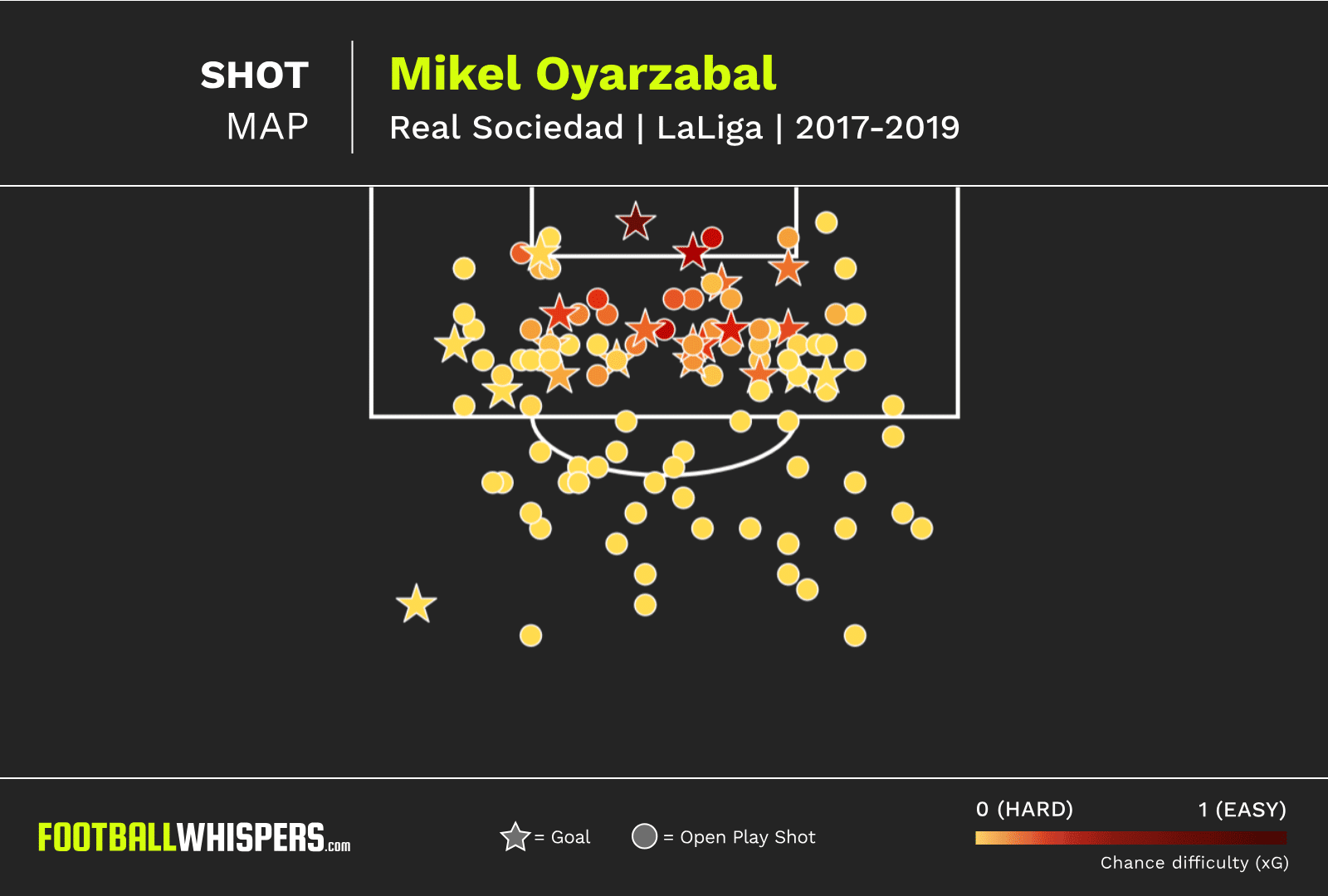 There's little doubt Oyarzabal would be an excellent addition to the City frontline, either alongside Sané or instead of him. However, there is another intriguing possibility.

Next summer a Manchester City legend will leave the club. “Ten years for me is enough,” David Silva revealed in May.

“It’s the perfect time for me to go. It completes the cycle. It’s a nice round figure. I can never see myself playing against City for another team. So ten years – that’s it.”

Silva will be 34 years old when he leaves City. And given his ambition to play for Las Palmas, his local side, it is the right time. He will, however, be irreplaceable.

Guardiola won't be short of options when the Spaniard departs – Bernardo Silva has arguably been primed to step in for his namesake – yet Oyarzabal could be an option, and not simply because he is left-footed and Spanish.

As shown below, the 22-year-old is able to create shooting opportunities for his team-mates from across the pitch. And there is a variety, from intricate around-the-box passes to defence-splitting balls forward. 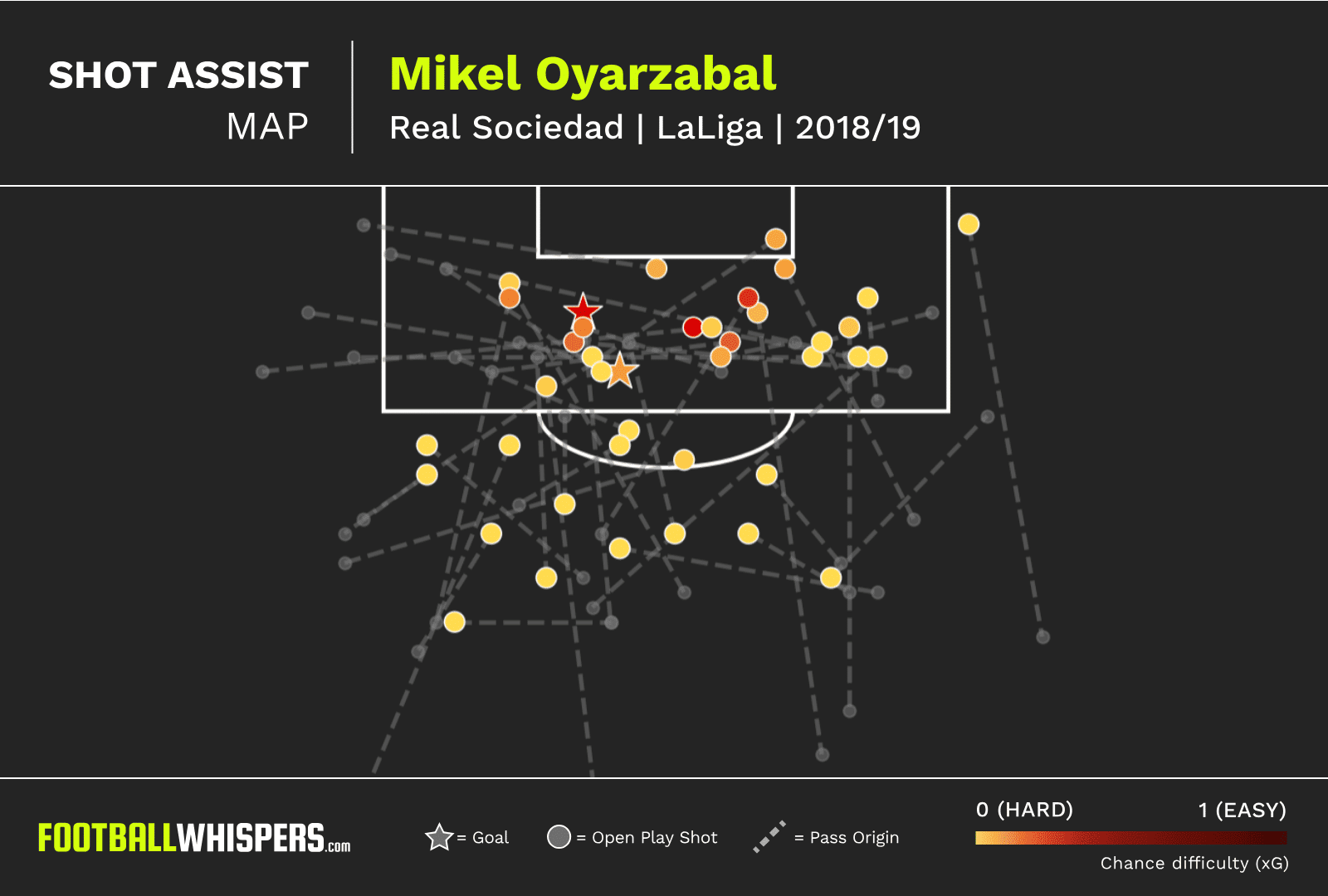 That ability to manufacture opportunities, coupled with his goal threat and work rate without the ball, could allow Guardiola to mould Oyarzabal into an attacking No.8, in much the same fashion he did with Kevin De Bruyne.

It's why the Premier League side should be doing all they can to ensure the young Spaniard becomes a City player next summer. Not only can he step into Sané's shoes should the German depart, he can also help ease the pain of Silva's departure.

He may cost £75million but Oyarzabal would be a bargain.