Major League Soccer has always had something of an image problem, especially in Europe. To many it is viewed as a refuge for fading stars; a retirement league for those no longer able to compete at the highest level.

This perception was founded when David Beckham, at the age of 31, became MLS' first designated player when he left Real Madrid in 2007 for LA Galaxy. And it was reinforced with every high-profile star that followed. Theirry Henry. Steven Gerrard. Frank Lampard. David Villa, Andrea Pirlo. The list of European stars to cross the Atlantic in their thirties is a long one.

Beckham did plenty of good in MLS. He boosted the league's profile, both domestically and internationally, and also enjoyed success on the pitch, winning two MLS Cups. His positive rhetoric about American soccer undoubtedly influenced the household names that followed, too.

Yet MLS clubs became blinded by his impact; they all wanted a bonafide star on which to build their franchise. Some got it right, others didn't. But it wasn't sustainable.

Which is why there has been a significant shift in recent seasons, one which has hugely benefited the league. Teams have become smarter, more astute. Sure, the attraction of a Zlatan Ibrahimović or Wayne Rooney remains, but more and more designated player contracts have been handed out to those in their mid-twenties.

Sebastian Giovinco went from Juventus to Toronto FC at 27 years old. Giovani dos Santos left Villarreal for the Galaxy at 26. His brother, Jonathan, joined him at 27. And Carlos Vela left Spain at 28 to sign with Los Angeles FC.

Yet, more importantly, MLS clubs are no longer just scouring Europe for talent. Many have turned their attention to South America, and none have done it better than Atlanta United.

The team only joined MLS in 2017 but have become one of the most intriguing sides in world football. They play in the state-of-the-art Mercedes-Benz Stadium, had an average attendance of over 50,000 last season, in which they won the MLS Cup and are valued at $300million.

And the heartbeat of their success is South America. Prior to their first MLS season, the club signed Venezuelan Josef Martínez and Paraguayans Miguel Almirón and Héctor Villalba. They then supplemented that trio in 2018 with Argentine teenager Ezequiel Barco (who has since piqued the interest of Liverpool).

The quartet all played important roles in Atlanta's success last year but 25-year-old Martínez and 24-year-old Almirón were the standouts. The former broke the scoring record for a single MLS campaign and was named MVP; the latter was the creative hub of the side and scored 12 times and registered 14 assists. 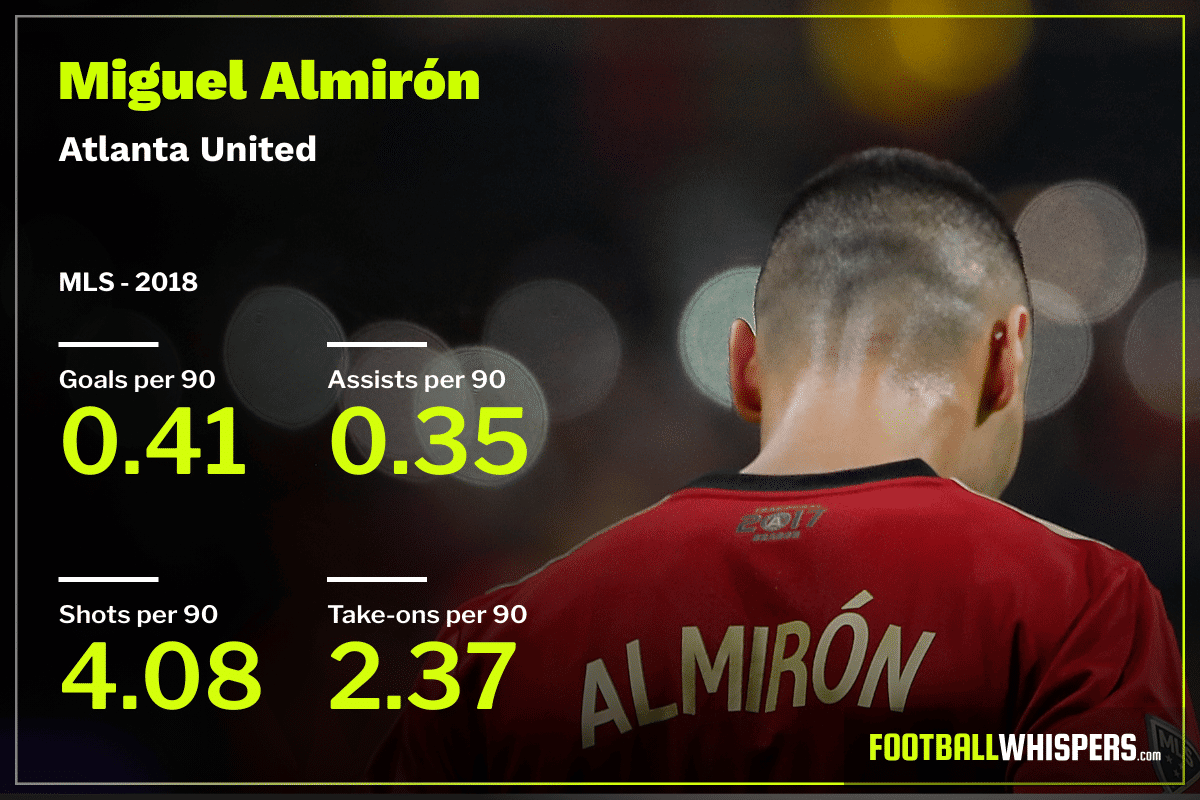 Unsurprisingly, both have been linked with moves to Europe. It would be a return for Martínez, who had a spell in Italy with Torino and in Switzerland with Young Boys, but for Almirón it would be new ground.

“There are clubs from England, Germany, Italy and Spain that are interested in Miguel, but we aren’t going to rush things,” the player's agent, Daniel Campos, told ABC in Paraguay earlier this month.

“There are two or three clubs in England that have interest, but we have not advanced much. With Newcastle United, I spoke about the player’s salary, but the club needs to raise their offer with Atlanta if they want to get the player.”

Newcastle have now done that. The Magpies, according to several reports, have agreed a fee of £20million with Atalanta, which will make Almirón the club's record signing.

“He has proved in these two years that he is by far and away one of the best players in the league,” Atlanta president Darren Eales explained.

“He is still a young player, he is a Paraguay international and it's brilliant he can cope with the physicality of the Argentinian league with Lanus and also the MLS.

“He is an amazing player, he was one of the best players on the pitch in both of the All-Star games that we played against Juventus and Real Madrid. I have no doubt that when the time is right and the offer is right he can be a success in whatever league he goes to.”

The time is now right, and Almirón's departure will be a landmark moment in MLS history.

He didn't arrive a star, but he will depart one. And he may help change the image of MLS once and for all.