Depending on who you ask, Eboue Kouassi is either Scott Brown’s long-term successor at Celtic or the player who accentuates just how badly the Hoops still rely on their captain and spiritual leader. Indeed, the Ivory Coast midfielder has been something of an enigma since pitching up at Celtic 18 months ago. Now, he could be set to leave.

So would allowing the midfielder to leave be a mistake on Celtic’s part? It’s worth noting that Kouassi is still only 20. He might not have made many first team appearances over the past season and-a-half, starting just nine games in total for the Hoops, but would Brendan Rodgers come to regret selling the Ivorian?

It’s largely Brown’s fault that Kouassi has been used by Rodgers so few times since signing 18 months ago. At the time of Kouassi’s arrival in Glasgow, it was reasonable to assume the

Of course, this hasn’t happened. Instead, Brown has found the best form of his career over the past two seasons under Rodgers, culminating in him picking up the PFA Scotland Player of the Year award last month. There is no sign of Brown fading and so this might have sparked Kouassi’s desire to leave this summer. 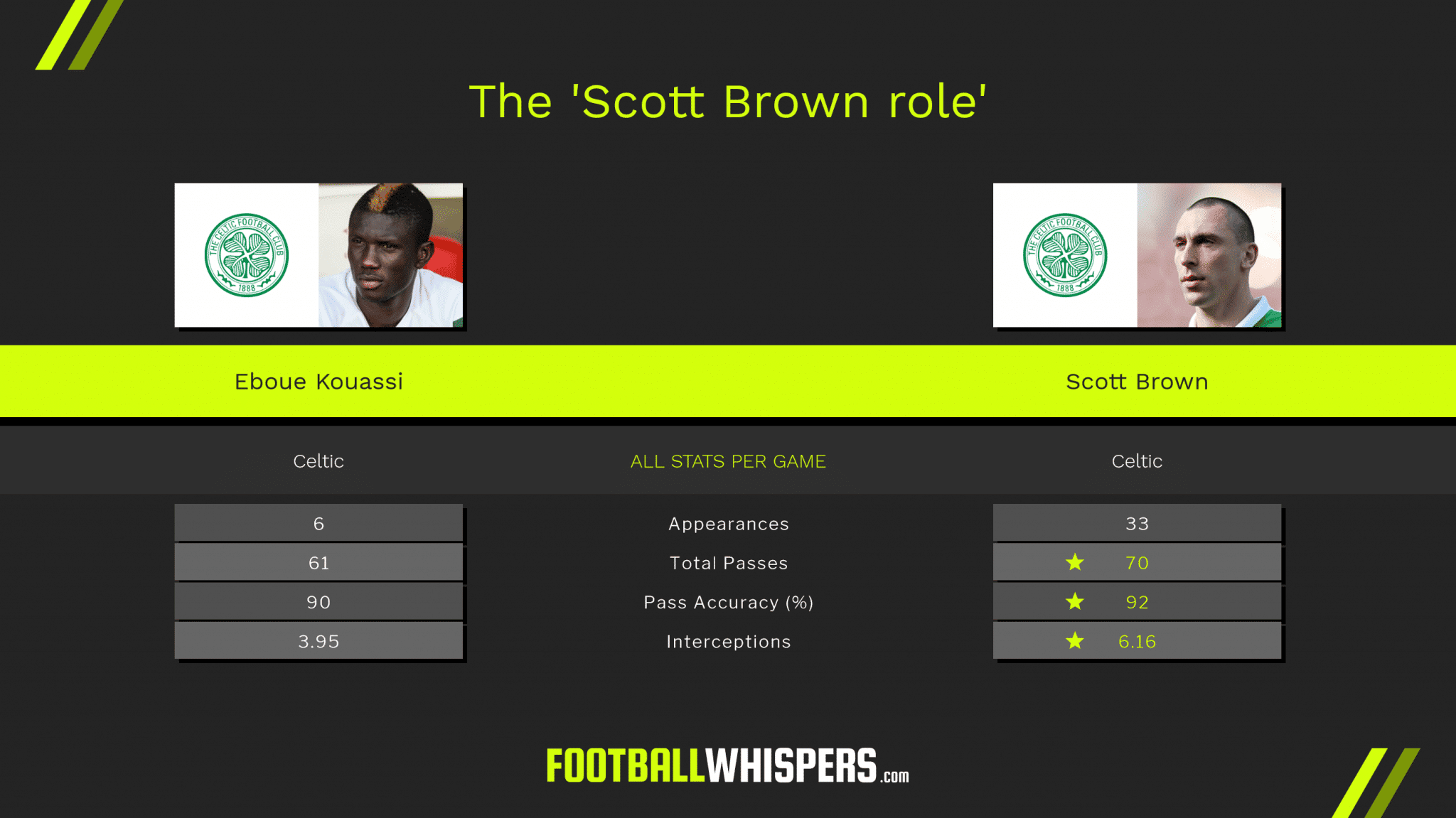 This isn’t to say that Brown and Kouassi are exactly the same sort of player. Brown makes more passes per game (70 on average compared with 61), he provides more of a barrier in front of the back four.

Both are efficient with their use of the the ball, with Kouassi’s pass success rate of 90 per cent close to Brown’s rate of 92 per cent. Both occupy similar areas of the pitch, although Rodgers has taken to using the Ivorian on the right side of the central midfield unit, with

Perhaps Kouassi’s best performance in a

There are a number of parallels to be drawn and Rodgers himself has used those comparisons to justify why Kouassi has been given so little game time. “Eboue was brought in and he plays a specific role – the Scott Brown role,” the Northern Irishman said earlier in the year. “It just so happens he’s the captain, who’s been brilliant.

“It’s been difficult. Browny is one I’ve taken out the odd time and got Eboue in but there’s really no doubt that he hasn’t played enough games. But it’s not because of him, it’s because of the form of our captain.

“Eboue’s brilliant in training, he does everything, and longer term he will certainly fulfil that role when Scott moves on. But while we wait for that, we need to ensure Eboue is developing and improving.”

If Rodgers is committed to the continued development of Kouassi, then a loan move might be the best solution for all parties concerned next season. It’s true that the Ivory Coast midfielder needs more game time to progress and that’s something Celtic might not be able to offer him at this time. A compromise would be sensible.

On the other hand, Celtic might judge that they need the money to replenish other areas of their team.

Not for the first time, Moussa Dembele has been linked with a move away from Glasgow this summer and replacing the French striker, who has been a huge success since moving north two years ago, won’t be easy. Or cheap. Celtic will likely collect a big fee for Dembele, but a fee for Kouassi, a squad player, would help in finding a new centre forward.

Whatever happens this summer, it seems likely that Kouassi will start next season at a different club. A loan deal might be the best option, but with