PSV are as good as through after the first leg but what does that leave in store for this match? Find out with our Midtjylland vs PSV match preview with free tips, predictions and odds mentioned along the way.

PSV to follow up first leg win with another victory

Midtjylland might come into this second leg with PSV off the back of an impressive win in their domestic league but the idea of them getting a result off PSV looks a long shot. The fact is that after losing 3-0 in Holland they have to come out and take the game to PSV. That doesn't bode well for them with PSV very much an in form attacking outfit; they've won their last five matches and are unbeaten in 15; included in that run are notable wins over Galatasaray away from home and the demolition of Ajax; both are fairly recent to show just how in form PSV are.

It will be a high scoring game

Quite often you'll see a team sit tight on a 3-0 aggregate lead knowing they don't have to probe for further goals; that is not what you'll get from PSV. They'll be delighted to go toe to toe with Midtjylland again knowing they have the beating of them. Their recent results have seen seven of the past 10 matches end north of the 2.5 mark; the total goals in that time is a staggering 44. Then you have Midtjylland; six of their last 10 have gone over 2.5 too albeit with their total goals much lower at 29 goals. Whatever way you dress it up, goals appear to be coming.

With a few goals on the horizon we thought we'd opt for an anytime goal scorer prediction to close out our tips. The man we're plumping for is Noni Madueke. Last season he netted a total of 11 goals; he's on course to shatter that this year though. The campaign is four games old and Madueke has bagged four goals already including a brace in PSV's last outing. With form like that and plenty of chances likely to land his way, it wouldn't be a surprise to see him hit the back of the net again.

Here are the key stats and odds for Midtjylland vs PSV

In form PSV to continue their impressive run

Both of Midtjylland and PSV have been in good form of late. Midtjylland have lost just one of five with that loss coming against PSV whilst the Dutch giants are unbeaten in 15. The big difference between the sides is that PSV are smashing in goals for fun and that makes them a frightening prospect. Noni Madueke, who we've backed to score, is just one name to watch for PSV. Midtjylland have their own players who will cause trouble though; their most in form player is Anders Dreyer.

Final questions for Midtjylland vs PSV 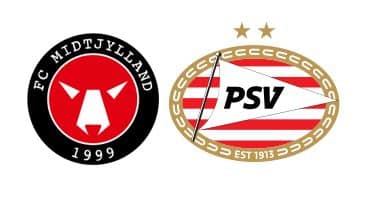