After consecutive five away games, AEK Larnaca comes back to their home to host the second leg of Europa Conference League Qualifiers against Midtjylland. Both teams have got back winless streaks.

Larnaca are winless in the last three games but they didn’t lose a single one in the last seven attempts. On the other hand, Midtjylland are yet to win from the previous four games and lost two of them. Larnaca and the Wolves also won the last home games and lost the previous away outings respectively. Adding more, Green-Yellows were also able to restrict Midtjylland to a draw at their home stadium. So we expect Larnaca to fancy their chances and confirm their place in the next round.

AEK Larnaca has scored at least twice in three of the last five games and also scored two goals in the last home attempt. Midtjylland didn’t collect a huge total but they also managed an average of one goal per game in the recent four outings. Moreover, none of the teams succeeded to get a clean sheet in their latest games. Therefore, we predict this game to go over 2.5 goals, opposite to the last meeting’s result.

AEK Larnaca vs Midtjylland: Check out the best odds and the latest stats

AEK Larnaca vs Midtjylland: Check out the team lineups

Green-Yellows extended their unbeaten sequence of away games previously with a 1-1 draw against Midtjylland in the first leg of the Quarter-Finals. Larnaca are going to play their first home game after the last win against Paphos in May. Andreas Paraskevas will be out of the field of this match due to a cruciate ligament rupture.

The Wolves played their second winless game of the Danish Superliga in the last game and lost by 1-3 against Silkeborg. Midtjylland held the streak of six away wins before the defeat in the last visit. Evander will not be able to make an appearance in this game due to torn muscle fiber.

Questions About AEK Larnaca vs Midtjylland 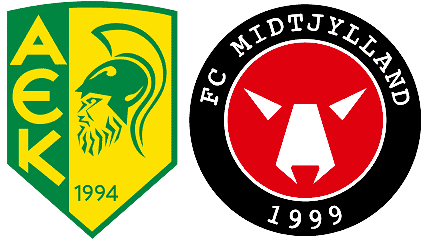 Where is the game being televised? Arena Sport (Ser), TV3+, Viaplay (Den).

Where is the game being played? AEK Arena (Larnaca).