Let's check out the Middlesbrough vs Wycombe match predictions and free betting tips in this article. You can also check out our site for more Championship odds and tips.

Below, you can see our suggestions for the top free wagering tips on the Middlesbrough vs Wycombe fixture. Our recommended bookmaker for this match is Ladbrokes.

All odds are subject to change, so make sure that you check them on the bookmaker platform and see if you still want to place the wagers if they did change.

Duncan Watmore is Middlesbrough's top scorer in the Championship and he has nine goals and one assist, so far. After he is midfielder George Saville with six goals and four assists. Watmore scored three goals in the last seven games he participated in, like Middlesbrough's last two fixtures against Luton and Sheffield Wednesday.

Latest Odds and Statistics for the Middlesbrough vs Wycombe Fixture

Find the most recent statistics and match data for the Middlesbrough vs Wycombe fixture in the table below.

Wycombe is last in the Championship table and will most likely get relegated, and even if they weren't they lost in the last head-to-head they had against Middlesbrough in January and they are missing two midfielders – Nnamdi Ofoborh and Dominic Gape. Forward Adebayo Akinfenwa will also not play on Saturday because of a recent injury. He already missed two Wycombe fixtures and is about to miss a third.

Middlesbrough will be missing six players – four midfielders and two defenders, but we believe that won't be a big issue, considering four of those players have been missing for quite a few games, so it most likely won't be a problem for them considering they managed not to lose in the last three games without the same players. 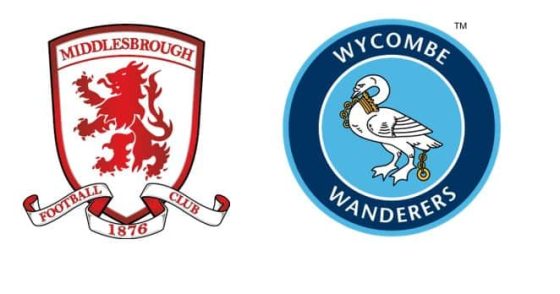