Derby have moved within four points of safety after their latest victory. Will Middlesbrough make them wait a little longer to close that gap anymore? Find out with our Middlesbrough vs Derby match preview with free tips, predictions and odds mentioned along the way.

Derby might be showing serious signs of life down at the bottom of the Championship table but we don't think they'll be taking much home from the Riverside on Saturday. The Rams have shown real fight this season but they do still lose games as is evidenced by the fact they've taken just four points from the last 12 available. The truth of the matter is that they'll need a bit more than grit to take anything off this Boro side. Middlesbrough are in good form having won their last two league games whilst squeezing a cup win at Old Trafford in between the two. A look to the head to head shows Boro have lost to Derby just once in the last 10 meetings when they're the home side; a point would be a phenomenal result for Derby but we can't see it.

We'll see goals at both ends

Although we fancy Middlesbrough to win this game there is a lot to like about this Derby side and, recently, they've started to find a bit more of an attacking threat and we fancy them to score in this game along with Middlesbrough; that's why we're backing both teams to score. Boro have scored in eight of their last nine games whilst keeping three clean sheets. Derby meanwhile have scored in eight of their last 10 matches recording a trio of shutouts. Those stats tell us we should expect goals; the fact it's priced at evens by Betfred just means we're getting serious value from the odds.

Check out the key stats & form for Middlesbrough vs Derby

Both of these clubs are massive but their seasons couldn't be going in more different directions if they tried. Middlesbrough are battling for a top six spot whilst Derby are clambering all they can muster to escape the drop zone. The pair of them are desperate for the three points.

Middlesbrough sit in seventh position right now in the league table with games in hand over several of those above them; that makes it highly likely they break into the top six in the coming weeks. A home tie with second bottom Derby is a match they would have earmarked for three points and, given their recent form, there will be no prizes for guessing the lineup.

Wayne Rooney has come out and claimed that keeping Derby in the Championship would be his greatest achievement in football. His side are certainly showing signs that they're capable of getting results but they'll need to find something a little bit extra to take anything off Boro; what does Rooney have up his sleeve?

A brief FAQ ahead of Middlesbrough vs Derby 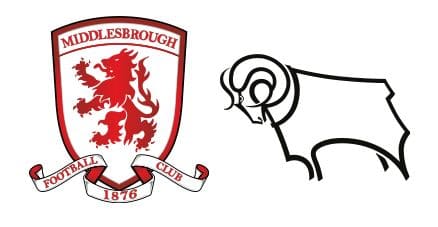