This fixture pits two experienced bosses against one another in the shape of Neil Warnock and Nigel Pearson. Who will come out on top? Find out with our Middlesbrough vs Bristol City match preview with free tips, predictions and odds mentioned along the way.

Nothing to separate the teams

Our first prediction is one that struggles to back a winner. Middlesbrough have failed to register a win in their opening two matches with a league draw and a League Cup defeat whilst Bristol City have suffered the exact same fate from their first couple of games so – albeit their cup exit came via penalties. Both had decent enough pre-seasons after a lacklustre end to the previous season though meaning the moods in the camp shouldn't be too low. Pearson would take an away point if offered now and, whilst Middlesbrough will want to win, their boss will very much come into the match with the mentality of ‘if you can't win it, don't lose it'.

Goals will be lacking

In addition to making the prediction of this game ending as a draw we also think it will be a typical Championship tie with plenty of gusto but lacking the quality you see at the top level; as a result, goalmouth action could be lacking. Last season, Middlesbrough averaged a total goals of 2.3 per match with Bristol City coming in at just a shade over 2.5. When you consider both sides fell short of three goals in their opening weekend along with the betting odds it's fair to say an under 2.5 bet carries value.

Just one goal each

Our final prediction is an ambitious one with the correct score market a little bit of a lottery. Our tip of 1-1 isn't without any logic at all though. For starters, both Middlesbrough and Bristol City saw their first league matches of the season end with that score line. Beyond that though, you can find stats that support the solitary goal on both sides. Middlesbrough have scored a total of five goals in their last five competitive games; an average of 1.0 per game. As for Bristol City, they've scored one goal in four of their past five league matches.

Your key stats for Middlesbrough vs Bristol City

A close encounter between two sides with big ambitions

Neither Middlesbrough or Bristol City had the seasons they had hoped for last season but it's a new year now and both will have playoff aspirations. They have not started the campaign in such form though with both winless from their opening two games. After drawing their respective opening matches and suffering exits from the League Cup in midweek, a win would be most welcome for both managers. For the hosts, their new summer signing Sammy Ameobi will miss out with injury but Sol Bamba might come into Warnock's thoughts. As for Bristol City, Callum O'Dowda is out. 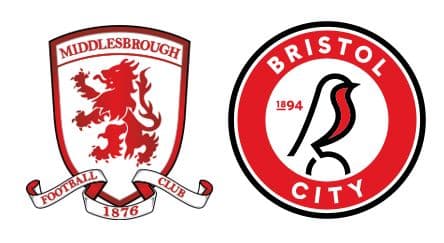