“Good footballers rarely need a lot of time to settle, [but] Andriy still has to get used to our playing rhythm over a longer period of time.”

The Ukrainian is another signing in the Germans' structure expected to achieve great things in Europe. The former Dynamo Kyiv forward, at 27 years old, is outside of BVB’s normal strategy, but don’t be surprised if they still make a profit out of him.

European clubs have known for quite a while that a good director of football is worth their weight in gold and English clubs are finally starting to come around. Zorc’s influence at Signal Iduna Park has taken them from the verge of bankruptcy to one of the most idolised club sides in Europe.

A former player, the midfielder was already a club legend when he hung up his boots in 1998.

“Michael Zorc stands for Borussia Dortmund like no-one else,” beamed chief executive Hans-Joachim Watzke on the day they confirmed Zorc’s new contract until 2019. “He's been at the club since 1978 and has celebrated a great deal of success, first as a player, then as sporting director.

“That we wish to continue working together for the next five years demonstrates how much we value and trust the high quality of Michael's work.”

With a record 463 appearances for the club, Zorc, nicknamed “Susi” because of his long-hair, was a hero when he stopped playing at aged 36, but fans will forever be indebted to the way he has taken the club forward in his off-the-field role.

Zorc and Watzke took over before the 2004/05 campaign, Dortmund had finished sixth in the league and boasted stars such as Jan Koller, Ewerthon and Tomáš Rosicky, but all was not well behind the scenes.

Champions in 2002, things had turned sour for the Rühr club, and it wasn’t until Watzke moved from treasurer to his current role and brought Zorc in that they began to turn their fortunes around.

Since their appointment, Dortmund have won three Bundesliga titles, come second three times, won two DFB-Pokals and made the final of the UEFA Champions League in 2013. 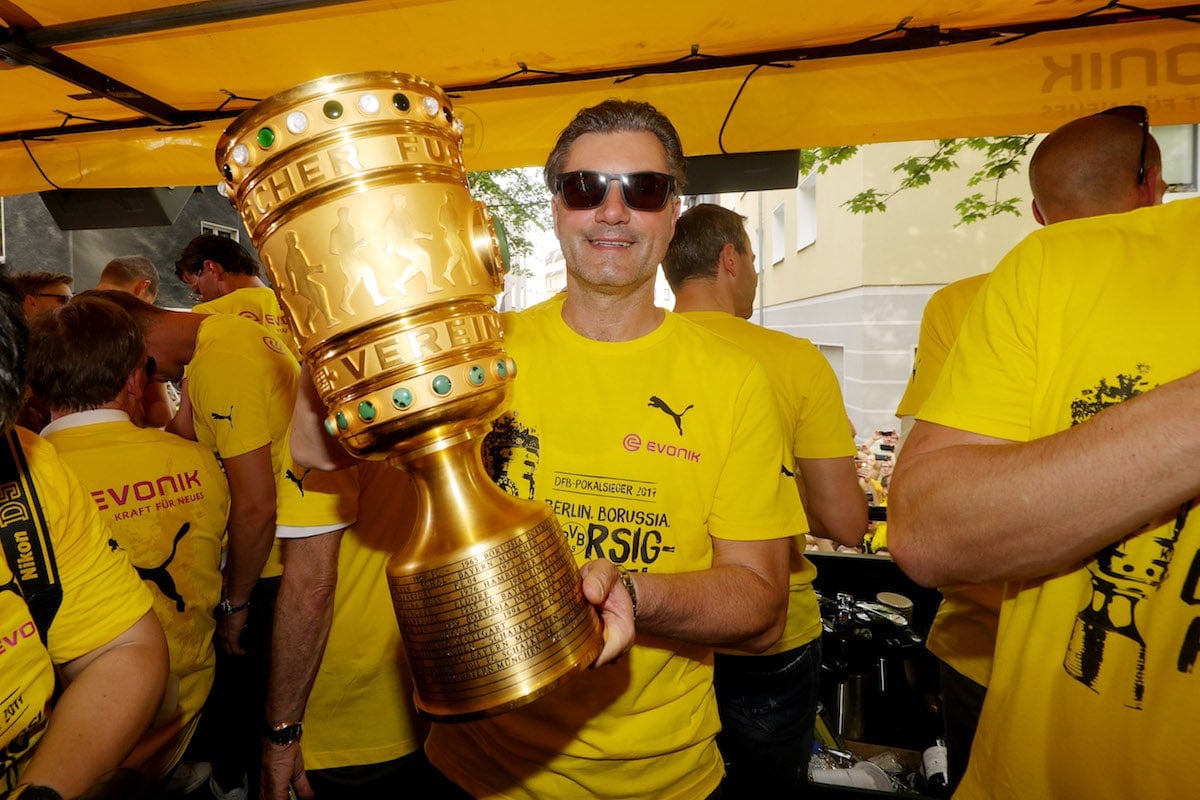 One of the most important factors in their success was making sure they had the right man in the dugout. Jürgen Klopp, after his success at Mainz, was the first coach to give their plans the potency and direction they craved.

“Thankfully with Jürgen we have found someone who supports progression,” the then 49-year-old .

“We made it clear that we needed a change. We needed to turn to youth, and develop our own players.

“Jürgen has put optimism and courage back in the side, we are now always evolving.”

When the charismatic coach stepped down in 2015, moving to Liverpool shortly after, they followed that same path, taking his replacement, Thomas Tuchel, from Die Nullfünfer.

Away from the success Tuchel found on the pitch, there was an obvious breakdown in the boardroom and the coach said his goodbyes.

“It's about basic values such as trust, respect, teamwork and communication skills, about authority and identity. It's about reliability and loyalty,” Watzke revealed in an open letter on the club's official website. “Unfortunately, we couldn't see a basis for continued work together built on trust with a successful outlook in the current personnel constellation.”

Despite this, their policy of snatching up some of the most promising talent in Europe continued to develop and grow. With Klopp away, both Watzke and Tuchel, and now new boss Peter Bosz, have put more faith in Zorc’s judgement on transfers and their policy is to try and keep all signings under the age of 23.

Zorc was behind the deals that brought Mats Hummels from Bayern Munich, İlkay Gündoğan from Nuremberg and Robert Lewandowski from Lech Poznan – the former two sold on for a profit.

Manchester City transfer target Pierre-Emerick Aubameyang was a relatively unknown quantity when he joined from Saint-Étienne in 2013. Now he is one of the best, most-wanted forwards in Europe.

Dortmund under Zorc have opened their scouting network wide and far, looking under every rock in the hope of unearthing gems.

Emre Mor was signed from Danish club Nordsjaelland, Christian Pulisic plucked from American minnows Pennsylvania Classics, and Julian Weigl seized from 1860 Munich. All three are already being touted as potential signings from Europe’s biggest clubs and that’s not something that is new to BVB.

Might want to keep an eye on @BVB these next few years, then ? pic.twitter.com/EjvS7wTzAP

A willingness to give youth a chance has helped the club develop their own talent, like Felix Passlack, but they are always looking around Germany and Europe for the next superstars.

Over the last six seasons the club has made more than £400million on selling talent. But rather than keep all the profits, this summer alone they spent £82million to strengthen their squad.

Yarmolenko may have been outside their usual parameters, but in Maximilian Philipp, Ömer Toprak, Mahmoud Dahoud, Jadon Sancho and Jeremy Toljan, they have picked up five players who they will hope will not only become stars for BVB, but a source of profit in a few years’ time. This is Zorc’s legacy and what he does best.

“I sense that we haven't reached the end of our development yet,” said Zorc when he signed his new deal in 2014.

“I see it as our joint responsibility to build on the success of recent years and establish Borussia Dortmund at the summit of German football and as a permanent fixture in the UEFA Champions League in the long term.”

As well as buying talent, Zorc understands that selling at the right time, for the right price, is just as big a part of the process.

When Neymar was sold for £196million this summer, Barcelona were linked with a move for Ousmane Dembélé.

The German side stood their ground, but they knew deep down that every player has a price and if an offer matched their valuation, they had to consider it.

Even though the Frenchman had disappeared and gone on strike, Dortmund still held control.

“We know where he is and have contact with him and his agent through a staff member,” Zorc said.

“We have a clear idea [concerning the fee] which Barcelona and the player know. If our demand is fulfilled, he will be transferred this summer.”

The final deal is worth around €105million up front, but could rise to €140m with add-ons. Not bad for someone they only played for one season after joining from Rennes for £15million in 2016.

Not every deal will yield that huge a profit, but that’s the plan.

A good start to the 2017/18 campaign feels like they have made the right choice with Bosz and with their summer activity, which is more vindication for Zorc and his methods.

Arsenal were linked with the German sporting director last year, but you get the feeling that he plans to stay at BVB for as long as they want him.

If he continues to grow and mould the club as he has, and the partnership with Watzke doesn’t sour, why would they ever want to say goodbye to their homegrown hero?