As the most elegant and gifted footballer of his generation – the complete attacking midfielder – it is somewhat of a travesty that Michael Laudrup never quite received the recognition he deserved.

In the early- to mid-1990s, Laudrup was arguably the best player in the world, the catalyst for Johan Cruyff’s Barcelona “Dream Team”, yet was never even voted into the top three contenders for the Ballon d’Or.

The award, as it was back then and as it is returning to be this year, was voted on by members of the European press. Perhaps they were unable to truly appreciate the level of his ability, but Football Whispers regard Michael Laudrup in the Top 10 Number 10s – you can view the full list here.

For the Dane was a footballer’s footballer. Ask any of his former team-mates and they’ll gush over his genius. “The best player I have ever played with and the 4th best in the history of the game,” said Brazilian striker Romario; “One of the best European players I’ve ever seen. An elegant, old-fashioned playmaker, he did things few other footballers could do,” said Bulgarian powerhouse Hristo Stoichkov; “The best I have ever played with,” Real Madrid legend Raul simply described.

Laudrup’s greatness is not lost on those who have trod in his footsteps since. Andres Iniesta, whose own playing style bears a stark resemblance to the former Barça man, said: “Who is the best player in history? Laudrup.”

A praise comes from no higher standing in modern football than the lips of Lionel Messi. The Argentinian star may be too young to have seen Laudrup play first hand, but he reveres Denmark’s greatest ever player nonetheless: “I fully understand why he is considered one of the best players in Barcelona's history and even the world.”

An exceptional talent from a young age, Laudrup was crowned Danish player of the year as an 18-year-old while playing for Brondby in 1982. The following summer he was snapped up by Serie A champions Juventus.

Liverpool appeared to have a deal for the youngster all but tied up, but when they changed the personal terms agreement to include a four-year contract, rather than the three-year deal that had been discussed, Laudrup took it as a sign of the Anfield club’s arrogance and opted to join the Bianconeri instead.

Little did he know, however, he would not be able to turn out for his new club for another two seasons.

At the time, Serie A rules dictated that a club was only permitted to register two foreign players. Juventus already had Frenchman Michel Platini and Polish midfielder Zbigniew Boniek. Laudrup was sent out on loan to newly promoted Lazio.

Laudrup’s influence helped the Biancoceleste avoid relegation in his first season at the Stadio Olimpico, but the Rome club were unable to stave off the drop the following term.

The sale of Boniek to Roma in the summer of 1985, meant that Laudrup could return to Juventus, where he would play alongside Platini in midfield. The former Brondby man’s first season at the Stadio Delle Alpi coincided with Juve winning both the Serie A title and the Intercontinental Cup, and he was once again named Danish player of the year. 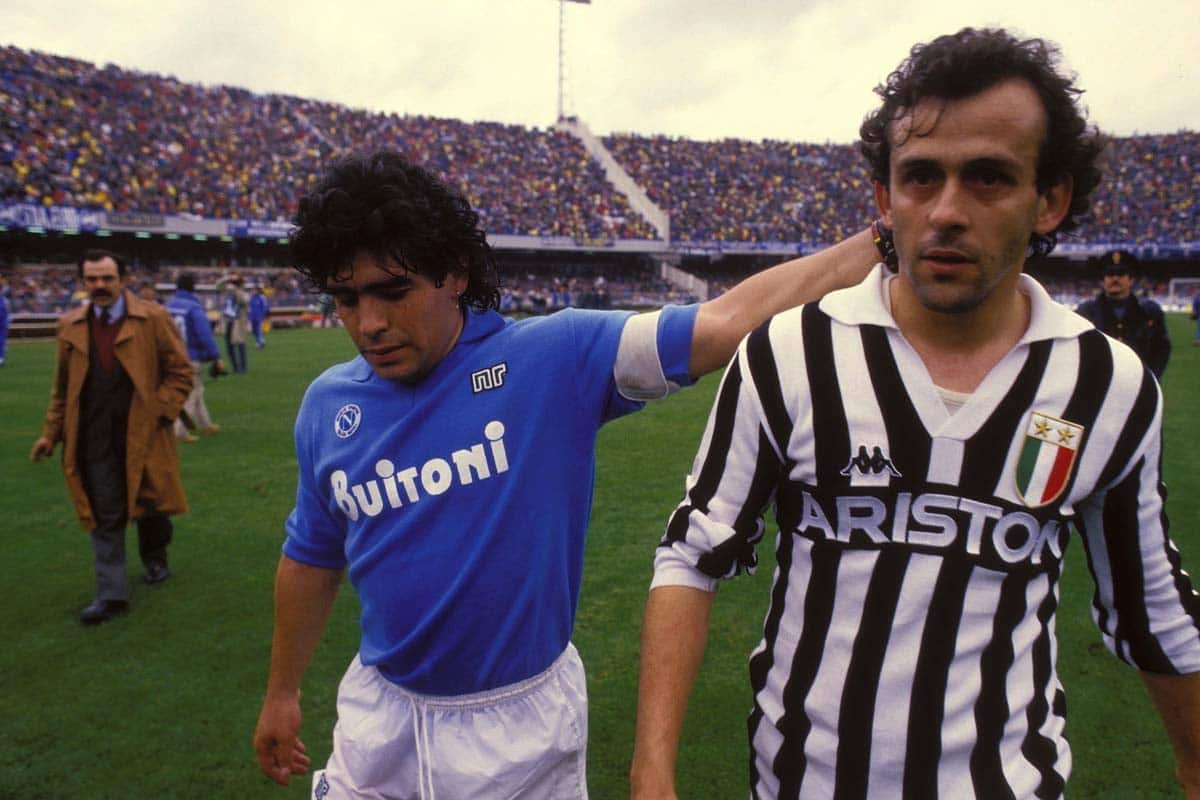 When Platini retired in 1987, the then 23-year-old was earmarked to replace the legendary Frenchman as the midfield star of the Old Lady, but he was never quite able to perform up to those lofty expectations — failing to score a single goal in the 1987-88 Serie A campaign – and was sold to Barcelona in 1989.

Upon arriving at the Camp Nou, Laudrup got the chance to work under his childhood hero, Johan Cruyff. His elegant and technically flawless playing style had often drawn comparisons to the great Dutchman.

At Barça, Laudrup’s creative instincts and positional fluidity saw Cruyff deploy him primarily as a kind of deep-lying centre-forward, where his dribbling skills and movement made him hard for opposing defenders to pick up, while his vision and passing allowed him to create openings for team-mates breaking forward from midfield or coming in off the wings.

As Jonathan Wilson points out in his superb book Inverting the Pyramid: The History of Football Tactics, Laudrup’s interpretation of the centre-forward role would act as pre-cursor to Guardiola’s usage of Lionel Messi when he became coach of the Blaugrana in 2008.

“In terms of his role,” Wilson writes, “Laudrup was perhaps the forerunner of Lionel Messi: the term ‘false nine’ wasn’t in common usage then but that was essentially what he was.”

Laudrup helped Barça win four successive La Liga titles between 1991 and 1994, as well as securing the club’s first ever European Cup by beating Sampdoria at Wembley in 1992. 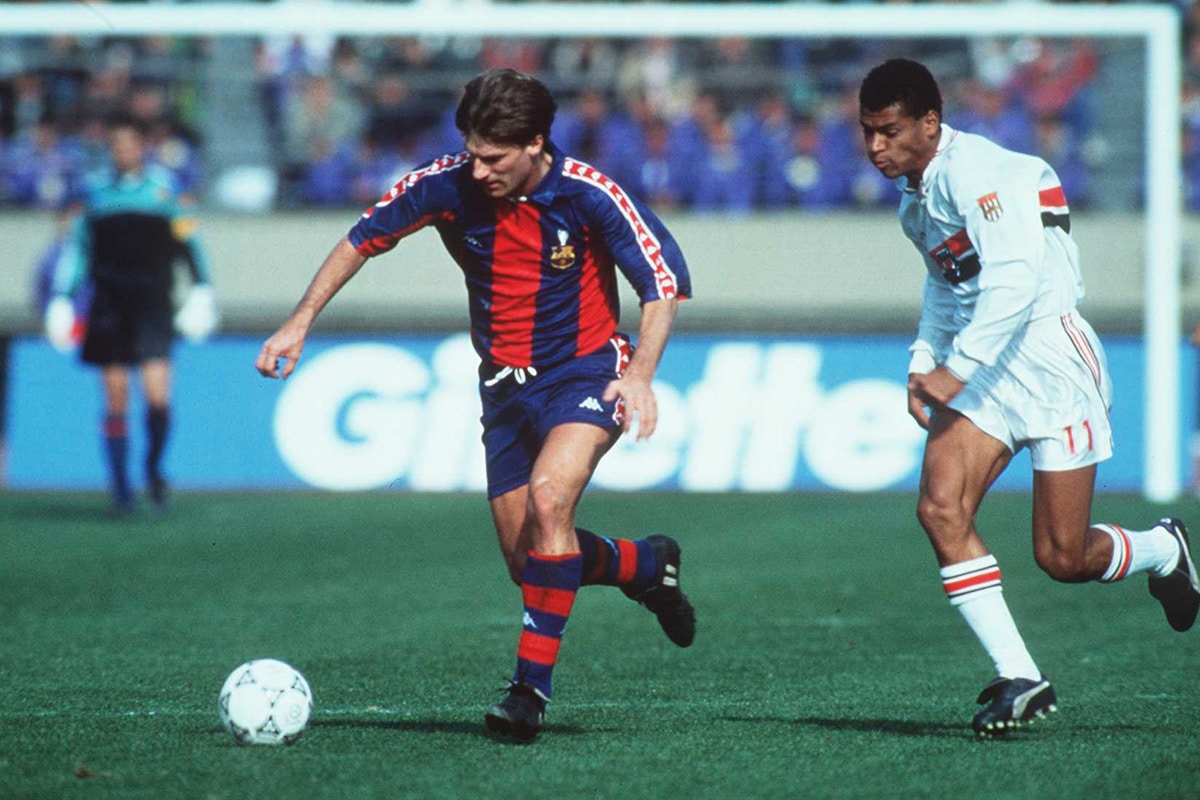 But Cruyff wasn’t completely happy with the Dane. Though there could be no doubt over Laudrup’s ability, the Dutchman questioned his application.

The Catalan giants signed Brazilian poacher Romario from PSV Eindhoven in 1993. This meant that they now had four foreign players on their books. UEFA rules dictated that they could only field three at a time, so Laudrup, Romario, Stoichkov and Koeman had to rotate.

When Barcelona reached the 1994 Champions League final, Laudrup was the man left out. This caused an irreparable rift between the player and coach. Barça lost the game 4-0 to Fabio Capello’s AC Milan. The Italian boss admitted after the match that his side benefitted from the former Juventus player’s absence: “Laudrup was the guy I feared but Cruyff left him out, and that was his mistake.”

That summer, Laudrup left to join bitter rivals Real Madrid. Many felt that his decision to sign for Los Blancos was taken purely to get back at Cruyff, but he insisted that that wasn’t the case: “People say I wanted to go to Real Madrid just to get revenge. I say revenge from what? I've had a perfect time; five fantastic years here [at Barcelona]. I went to Madrid because they were so hungry to win, and they had four or five players who went to the World Cup. I said this would be perfect; new coach, new players, and hungry to win.”

And win they did, wrestling the title from Barça. It was Laudrup’s fifth La Liga crown in a row, making him the first man to win the Spanish top division in five successive times across two different clubs. The previous season he has inspired the Catalan’s to thump their Clasico rivals 5-0, now wearing the famous white shirt of Madrid, he reversed that scoreline in favour of his new team.

Laudrup left Madrid in 1996 to play for Vissel Kobe in Japan, before ending his career with a short spell at Ajax.

On the international stage, he amassed 104 caps and scored 37 goals for Denmark, for whom he starred alongside his brother Brian. In 2006 Laudrup was voted Denmark’s greatest ever player but he was absent for their grandest triumph, the 1992 European Championship.

The Danes were a late inclusion in the eight-team tournament due to Yugoslavia being omitted because of the ongoing war in the country. Laudrup, along with his brother and midfielder Jan Molby, had quit international football two years earlier after falling out with manager Richard Moller Nielsen. He was asked to reconsider and join the Red and Whites for the competition in Sweden, but declined.

Laudrup returned to international action in 1993, but couldn’t help his side qualify for the World Cup in the USA the following year. He did, however take part in Euro ’96, before retiring from international football, once and for all, after the 1998 World Cup in France, in which he was named in the tournament’s all-star team for his role in helping Denmark reach the quarter-finals.

Laudrup’s style and grace influenced a generation of footballers. He was the complete playmaker, capable of genius and able to bend games to his will.

German World Cup winning player and coach Franz Beckenbauer summed him up best: “Pele was the best in the ‘60s, Cruyff in the ‘70s, Maradona in the ‘80s and Laudrup in the ‘90s.”