A midfielder without a single goal or an assist in the league isn't one you'd expect to see being linked with a moves to clubs in the Premier League's top six. But Max Meyer is wanted by Arsenal, Tottenham Hotspur, Liverpool, Barcelona and now Atlético Madrid.

Under Schalke coach Domenico Tedesco, Meyer has gone from being deployed as an attacking midfielder to being utilised as a deep-lying playmaker. It was the change he needed to get his career back on track after an underwhelming 2016/17 campaign.

However, the Bundesliga club now have a difficult situation to deal with. The 22-year-old's current contract expires in the summer and he's yet to decide where his future lies.

Schalke CEO Christian Heidel said: “Max will be deciding shortly if he wants to stay at Schalke past the summer.

“Max is very happy here, Schalke is his home, we will try to make it him as comfortable financially as possible. He is playing the best season of his life, and the coach has found a position for him that Max didn't believe he could play. Personally, I didn't think he could either.”

With attention this term on Bayern Munich bound Leon Goretzka, Meyer's team-mate, the Schalke No.7's future has gone under the radar. But now Meyer is Europe's most wanted and he may even be a greater loss to Schalke than Goretzka.

Meyer is not the first attacking midfielder to be moved into a more withdrawn role.

Pep Guardiola did it with Kevin De Bruyne and David Silva, Jürgen Klopp did the same with Adam Lallana, Gini Wijnaldum and Philippe Coutinho in the Premier League. Thomas Tuchel did so with Mario Götze at Borussia Dortmund and Roger Schmidt moved Kevin Kampl into a central area at Bayer Leverkusen. But the Schalke star might be the first to be moved into almost a defensive midfield role.

In his place stands a player who now completes 5.3 tackles and interceptions per 90 minutes. For context, Jordan Henderson (2.4), Granit Xhaka (2.4) and Mousa Dembélé (2.5) all play a similar role to the German midfielder for their respective teams but post inferior numbers.

The trio play in a different league for dominant teams so that will no doubt have a baring on their numbers. But to help paint a picture those stats are necessary.

Passing wise Meyer doesn't look out of place when compared to the three Premier League stars. His pass completion rate is 89 per cent which is only bettered by Dembélé (92 per cent) but he attempts fewer passes on average.

The Schalke midfielder attempts 54.03 per 90 minutes, 14 behind the Spurs man but 28 shy of Henderson and 30 short of Xhaka.

Meyer, standing at 5ft6ins, isn't the tallest of midfielders. It may be viewed as an issue for some but most of the clubs interested have powerful defenders who dominate aerially – Shkodran Mustafi, Laurent Koscielny, Virgil van Dijk, Dejan Lovren, Joël Matip, Jan Vertonghen and Toby Alderweireld are all in the top 35 for aerial duels won per 90 minutes in the Premier League.

Simply because he'll cost nothing would be the the lazy answer. The fact a four-cap Germany international is available for nothing certainly adds to his appeal but it's his use of the ball which will is causing some of Europe's elite to show an interest.

All of those clubs linked dominate possession, which means they often come up against opposition who like to sit deep and sacrifice space.

Against these sides a locksmith is needed. Someone who can pick a pass, open a team up and bypass their defensive lines. Someone who will take a risk is needed. Meyer can do just that. 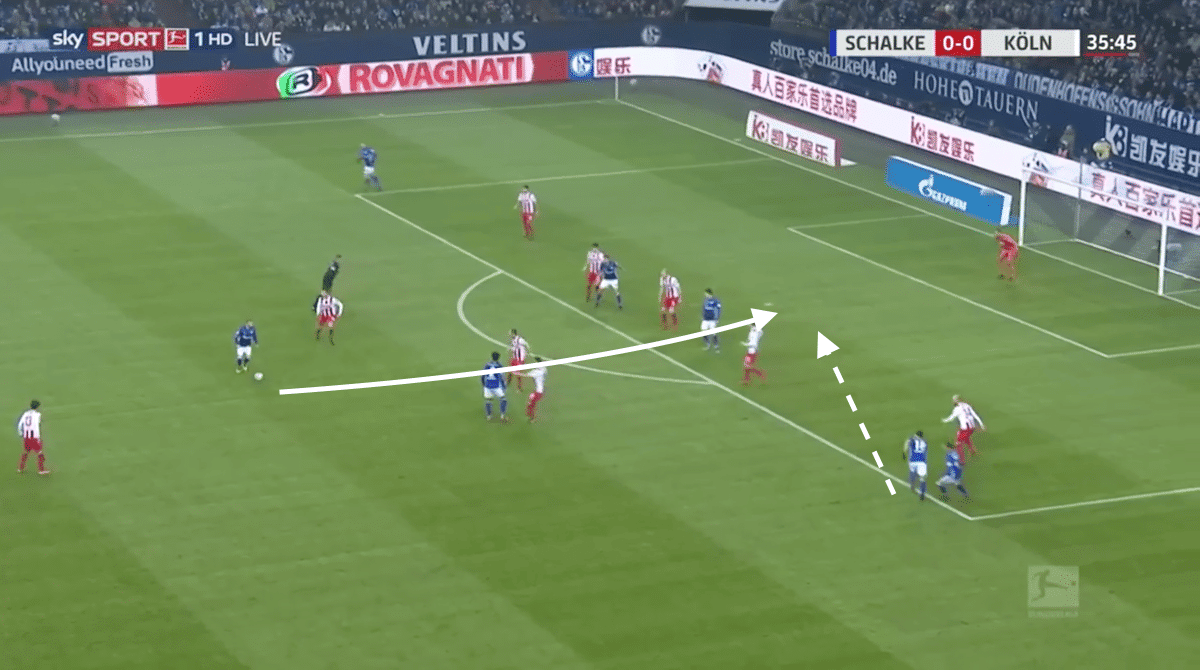 The 22-year-old not only has the vision, but also the skill required to execute difficult passes, as shown in the above picture. There's a pass on to his right if his aim is to keep possession, but it isn't. He wants to help his team break the deadlock.

He plays an incisive pass over the Köln defence, aiming for the man looking to cut in from the right. He's somewhat fortunate due to the fact his pass clips a team-mate on the way through but the intent is all the same.

Köln appear to have a Schalke attack under control, with eight players behind the ball as Meyer picks up possession.

Yet this move results in a goal and it all stems from the No.7 attempting the pass not many would. If it's underhit then it's easily cleared, if it's slightly overhit then the keeper, Timo Horn, can sweep up. 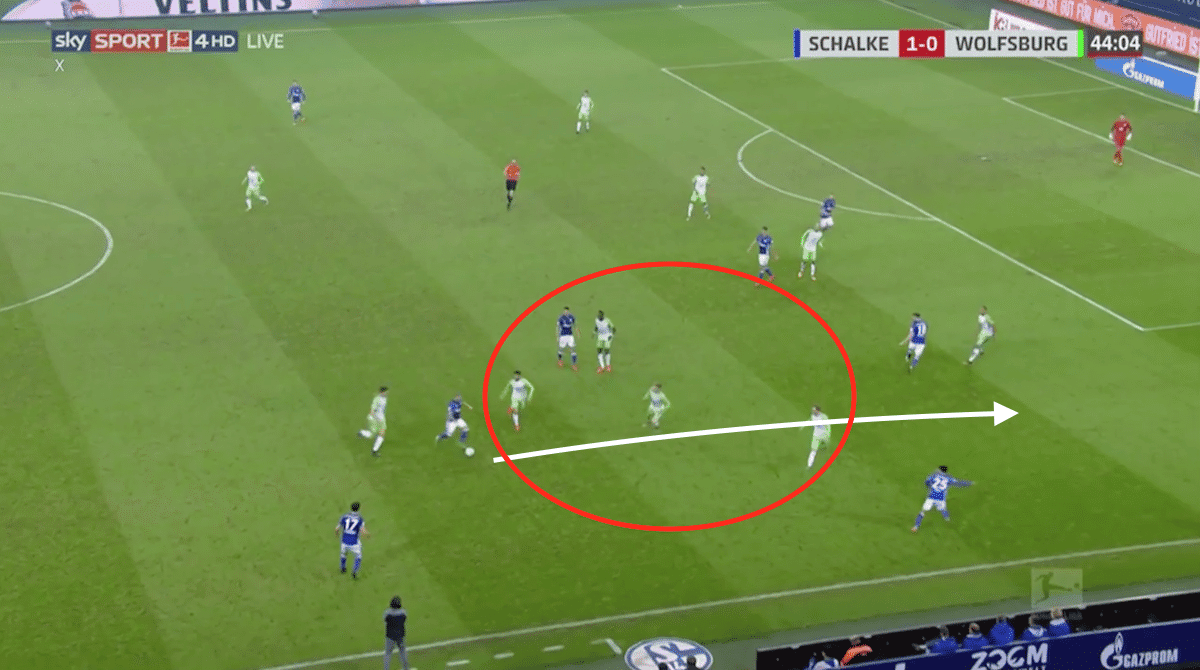 It's a similar story against Wolfsburg. Meyer is in possession and there doesn't appear to be much on apart from a pass backwards.

He has five players around him, four of whom are directly in front of him and are looking to cut out the passing angles. But he's able to create an opening.

He delays the pass which creates a gap between the Wolfsburg players on the right before sliding the ball between into the path of the winger making a move down the right.

Wolfsburg go from having eight men behind the ball to it being five vs four in Schalke's favour. All because of one perfectly executed pass from Meyer.

He is no longer the goal threat he once was and his xG (0.16) and xA (0.24) totals for the season attest to that. He's not even as creative as he once was, his key passes per 90 have dropped from 1.63 to 0.47. But he is more than capable of pulling the strings at the heart of the midfield.

On a free transfer, he would certainly be quite the coup for one of the big six.