2014 seemed like the year which would settle the Lionel Messi vs Cristiano Ronaldo debate.

Both were at their peak – Messi turning 27 during the tournament, Ronaldo was 29 – in the land where football magic is so often sprinkled. Both would be in their thirties next time around, in Russia, an age where legs start to creak, powers start to fade, and production can drop off a cliff.

But that happened to neither. Ronaldo managed to adapt his game to become more of a central striker while Messi continued to be, well, Messi. A star who creates more space by walking than some do running, age was never going to affect him as seriously as it does others.

While Argentina reached the 2014 World Cup final, they lost it, and then went on to lose two Copa América finals in the next two years while Portugal, Ronaldo barking on the touchline, won an unexpected European Championship.

The Messi vs Ronaldo debate is still no closer to being settled (if it ever will be).

This World Cup has only complicated the story. Argentina have struggled and are on the brink of imploding completely if rumours that they will pick the team against Nigeria on their own are true.

Messi winning his team zero points, Ronaldo winning his four; Messi on a disastrously failing team, Ronaldo on one that is at least matching expectations. This will, of course, change as the World Cup goes on, but it’s worth recording this as a snapshot of this particular moment in time.

If we look beyond the big numbers of points and goals, though, a very different pattern appears.

The two are virtually level when looking at their Expected Goals contribution (the chance quality of the shots that they take and the chances that they create). A note of order here, these totals are based on open play shots only, as shots and passes from set pieces are often less to do with the individual making them. 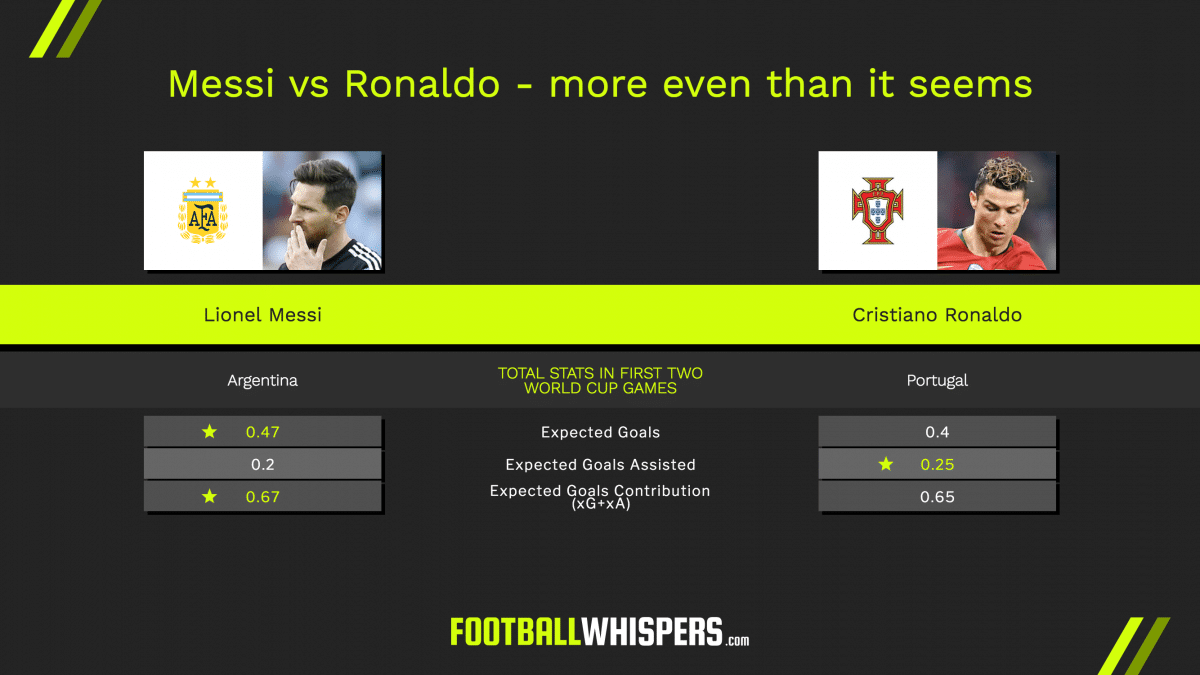 If nothing else, Ronaldo is a clinical machine on the pitch, which is an interesting juxtaposition to his curated off-field persona, all advertisements and glistening abs, while Messi is the one who, personality-wise, is thought to be the robot.

How does this play into the narrative? These Expected Goals totals don’t include direct free-kicks, but if they did then Ronaldo would be overperforming against his by even more.

Are their World Cups now more equal? Does this force an admission that their performances for their national teams are, to a large extent, outside their control, a matter resting in destiny’s hands?

There’s another level to these Expected Goals stats, though.

Taking into account shot placement, their tallies are remarkably different. Messi’s almost halves from 0.47 to 0.22 while Ronaldo’s bumps up from 0.4 to 0.52.

A large chunk of Messi’s shots were frustrated efforts against Iceland, and mean that – based on these numbers – his shots have averaged just a five percent chance of going in.

This isn’t necessarily Messi’s fault. Argentina’s inability to effectively get the ball from their defence to their attack means that Messi has to drop deeper to take possession. Ronaldo has always fancied a shot from range, but has generally benefited from a better, more cohesive team around him.

While we’re on the subject of nuance, it’s probably important to note that Ronaldo’s hat-trick came early on in the tournament, when it was fresh and new and everyone was watching, as was Messi’s struggle against Iceland.

Their second games were far less extreme, but by that point, the narrative had been set and World Cup fatigue is more likely to have set in, meaning fewer people possible paying attention to how the stars performed in those games.

At the moment, Russia 2018 looks set to go down as “Ronaldo’s World Cup” in the ongoing narrative sparring between him and Messi. The truth, though, is that it’s a lot more complicated than that.