Manchester United appear to have come to the realisation that Harry Maguire might be a little overpriced. Welcome to the party, Mr. Woodward.

According to ESPN, the Red Devils and Leicester City are still “miles away” from a potential deal. The Foxes want close to £80million for the England international, United are prepared to offer £60million.

That is still a little steep for a player who cost Leicester just £12million two seasons ago. And it explains why United have decided, at last, that they would be better off looking elsewhere.

With Matthijs de Ligt now a Juventus player, Kalidou Koulibaly too costly and Maguire out of the equation, Ed Woodward has revisited his post-it full of potential defensive targets and come back with a name: Merih Demiral.

The 21-year-old centre-back only joined Juventus this summer after he impressed on loan at Sassuolo during the second half of the 2018/19 campaign. But,according to reports, the signing of De Ligt has created concern over the amount of first-team minutes he will be afforded this season.

Milan have already have an offer for the Turkey international rejected by Juventus. But, for the right price, the Turin outfit are willing to a quick profit on the player they signed for £16million.

Sky Italia claim a bid in the region of £35million would be enough to convince Juve to sell and while it would be a risk given Demiral's relative inexperience – he has only one full season of top-flight football under his belt – it is a fee which could prove far better value for United.

So what qualifies the Demiral to play for Manchester United? Well, firstly, he modeled himself on one of the greatest defenders to ply their trade at Old Trafford.

“When I was young I always follow Nemanja Vidić at Manchester United,” he told Tam Saha magazine. “I used to watch clips of him on the internet. He’s still my idol even though he has retired. He was brave, a warrior. He never gave up and was a true leader.”

It's easy to spot Vidić's influence on Demiral's game. He is a dominant centre-back, a defender prepared to challenge for the ball even if they are not favourite to win it.

After his arrival at Sassuolo in January, no Serie A defender won more aerial duels per 90 than the Turk's 3.86. He was also a threat from set-pieces, his headed goals per 90 of 0.14 by far the best average in the Italian top flight. 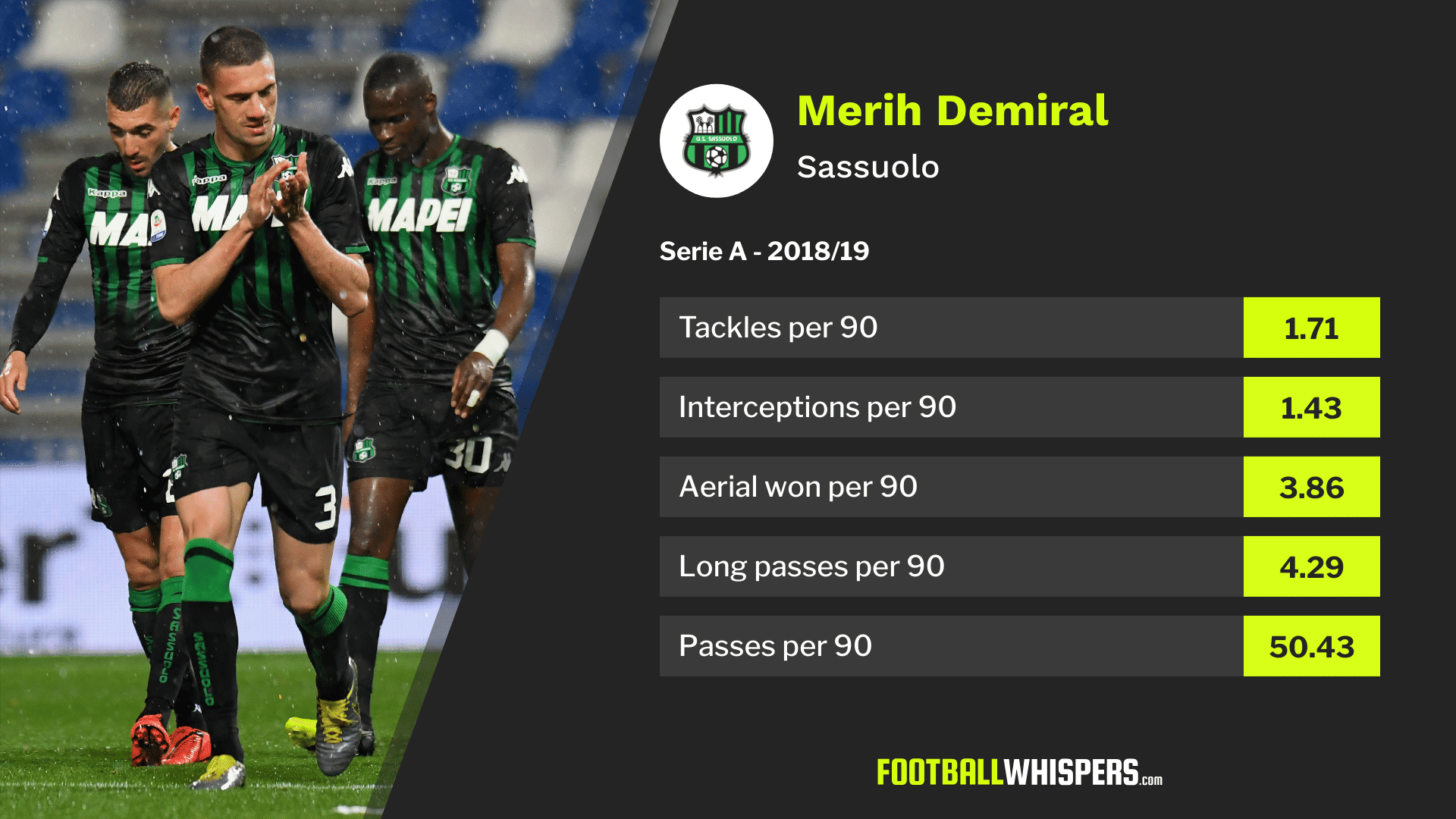 Yet he isn't simply a powerful physical presence, he reads the game well and times his challenges expertly: Demiral attempted 1.71 tackles per 90 for I Neroverdi and won 1.14 per 90.

His recovery pace is also a big asset. While the centre-back won't catch the very quickest strikers, he made a habit at Sassuolo of honing in on forwards who were through on goal and throwing his body in the way of a shot. Again, it was reminiscent of Vidić.

It's clear Demiral has the defensive nous and skill required for an elite side. But modern-day defenders are not simply in the team to stop the opposition, they are also the first line of attack.

One of Maguire's greatest strengths is his ability to collect the ball from his goalkeeper and advance possession, either through intelligent passing or by stepping out from the back four. For Leicester last term he completed 51.76 passes per 90, of which 39.2 per cent went forward, and completed 0.62 dribbles per 90.

He only joined the Italian side in January so needed time to adapt not only to a new system but a new country and a new style of football. And the numbers he did post suggest he is more than capable of playing for a side that wants to control possession.

Demiral is not yet a star name and his signing wouldn't create too many headlines, something which Woodward craves. But he could be exactly what United need this summer: a future star influenced by one of club's past greats.