Pep Guardiola’s first season in the Premier League resembled something of a fact-finding exercise. Manchester City finished 15 points adrift of Chelsea but their failure enabled the Catalan to learn a great deal about his squad, their capabilities and English football itself.

Highlighting those who dismissed his methods as being incompatible with England’s top-flight throughout 2016/17 is a well-worn exercise, but one glaring issue which held back City throughout was the quality of full-backs at his disposal.

Gaël Clichy and Bacary Sagna were elite performers in their mid to late 20s but at 31 and 34, respectively, lacked the required dynamism and tactical flexibility, Guardiola requires from his full-backs; who must attack with the same venom as they do defend.

Their upgrades were swift with world record fees for defenders set and broken in the space of 10 days. First, £50million was spent on Kyle Walker on the right-hand side, and then a further £52million on Benjamin Mendy for the left.

Except, while Walker was a resounding success as one of the division’s best defenders and even morphing into a top-class centre-back, Mendy’s involvement was curtailed by an ACL injury.

As a result, Guardiola experimented with a back-three or deployed Fabian Delph there, despite the England midfielder having little initial understanding of the position.

While the results were largely positive and Delph enjoyed a fine season, earning him a place at the World Cup, City still lacked something. Not just balance with a natural left-sided defender but an additional punch down the flank.

Mendy was signed following an outstanding campaign for Monaco in winning Ligue 1 and reaching the semi-finals of the Champions League. He was France’s best full-back and an aggressive presence down the touchline, finishing the season with eight assists. The perfect Guardiola-style defender.

But we never got to see just how potent a force he could be in English football.

Mendy’s impact was essentially limited to social media, as his Twitter posts became a welcome diversion from the stale character-less posts of his peers, while he seemed a popular and effervescent member of the dressing room amid all of the seriousness.

But when you spend £52million and offer a five-year contract, you want more than a glorified cheerleader, however, entertaining he may be.

Which is why, despite City’s minimal activity in the transfer market with the £60million arrival of Riyad Mahrez their only significant addition, Mendy should be such an exciting and integral part of the evolution of Guardiola’s side as they look to improve domestically and, crucially, in the Champions League.

Despite achieving near-perfection last term, Guardiola never had all the pieces at his disposal. Now he does, with two rapier-quick, dynamic full-backs offering constant outlets and further attacking dimension, while Mendy’s ability as a pacy, cover defender should boost City’s solidity at the back.

Already in the Community Shield and opening Premier League victory over Arsenal, in which he recorded two assists in the 2-0 victory, there’s been ample evidence of what a force he can be. Always on the front foot and attacking in a forceful manner.

His acceleration into space on the counter means opposing teams should be reluctant about pressing John Stones, Nicolás Otamendi or Aymeric Laporte too high up the field, as Mendy can create 2v1 situations down his channel if attacking players are drawn to City’s centre-backs.

His overlap to create Bernardo Silva’s decisive strike against Arsenal, as he raced past Héctor Bellerín before picking out the Portuguese, is exactly the kind of penetration that Delph, for his qualities didn’t provide consistently down the left-hand side.

His eagerness does mean he’s not always the most efficient in possession as his 76.7 per cent pass accuracy, however irrelevant it may seem, will need improving in the eyes of Guardiola with ball retention key. Delph was at 93 per cent last season, albeit with less attacking forays. 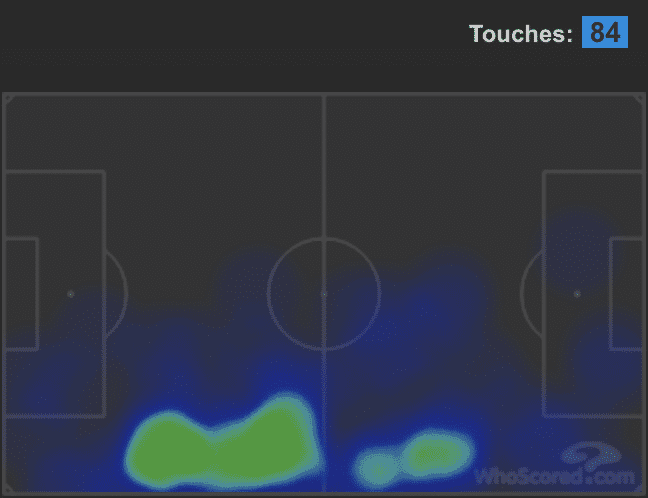 As a measure of his involvement and how important he and Walker will be to Guardiola, only the England international’s 86 touches exceeded Mendy’s 84 over the course of the 90 minutes.

City’s average width of possession was highest in the Premier League last season at 32.96m, two metres more than the next-best team in Arsenal. With Mendy further stretching the play on the other side that figure could well increase for 2018/19.

For a team with so many clever ball players that ability to drag the opposition wide and open space in the centre of the field should be devastating.

He can also play in a more advanced role, if Guardiola wishes to switch to a back-three. Leroy Sané was often the nominated left wing-back in this instance but understandably provided little defensive cover. Mendy increases security in this instance and allows the possibility of the formation change, either before or during matches.

With Kevin De Bruyne’s injury, there will be greater emphasis on City’s other creative individuals to maintain their offensive dominance. With David and Bernardo Silva, Mahrez, Sané or Ilkay Gündoğan from a deeper position they have them in abundance, but Mendy adds that additional edge, that explosive x-factor they lacked throughout last season.