Sometimes a move to a big club can come too soon.

His time in the Premier League was forgettable. He netted on just two occasions in the English top flight during the 2015/16 season and the man tipped by many to be Cristiano Ronaldo’s heir at Old Trafford looked lost in the No.7 jersey.

Despite being linked with other Premier League teams, Depay made the move to France in January 2017 to join Lyon. United took a reported £8million hit on what they paid for the Dutch forward just 18 months earlier but the move was one all parties needed.

He didn’t waste any time with the Ligue 1 side. He hit the woodwork on his full debut for the club before scoring from practically the halfway line a few weeks later. On the final day of the season, he scored a hat-trick as Lyon secured a place in the Champions League after a 3-2 win over Nice.

The 2017/18 season saw the Depay of old return. There was a confidence to his game. The swagger had returned and he was enjoying football again. His 19 goals in Ligue 1 was the second highest return of his career ever.

He failed to replicate that form again this season and with a game left to play has ten goals in the French top flight. But there’s been talk all season that Depay isn’t happy at the Parc Olympique Lyonnais, and that he’s looking to move to a bigger team.

Liverpool have been linked, Chelsea are reportedly in the market for a player of his style to replace Real Madrid-bound Eden Hazard while Tottenham’s interest in Wilfried Zaha suggests a wide forward is on their agenda this summer, too.

Everton are continually linked with him, Marcel Brands knows him from his time at PSV, and the 25-year-old could well be the difference between a top six finish and the best of the rest tag.

But is the 46-cap Nertherland International really ready to return to the Premier League or is the reputation he built during his time in Holland still carrying him? For a fairer analysis, we’ve taken a look at his numbers from the past two seasons. 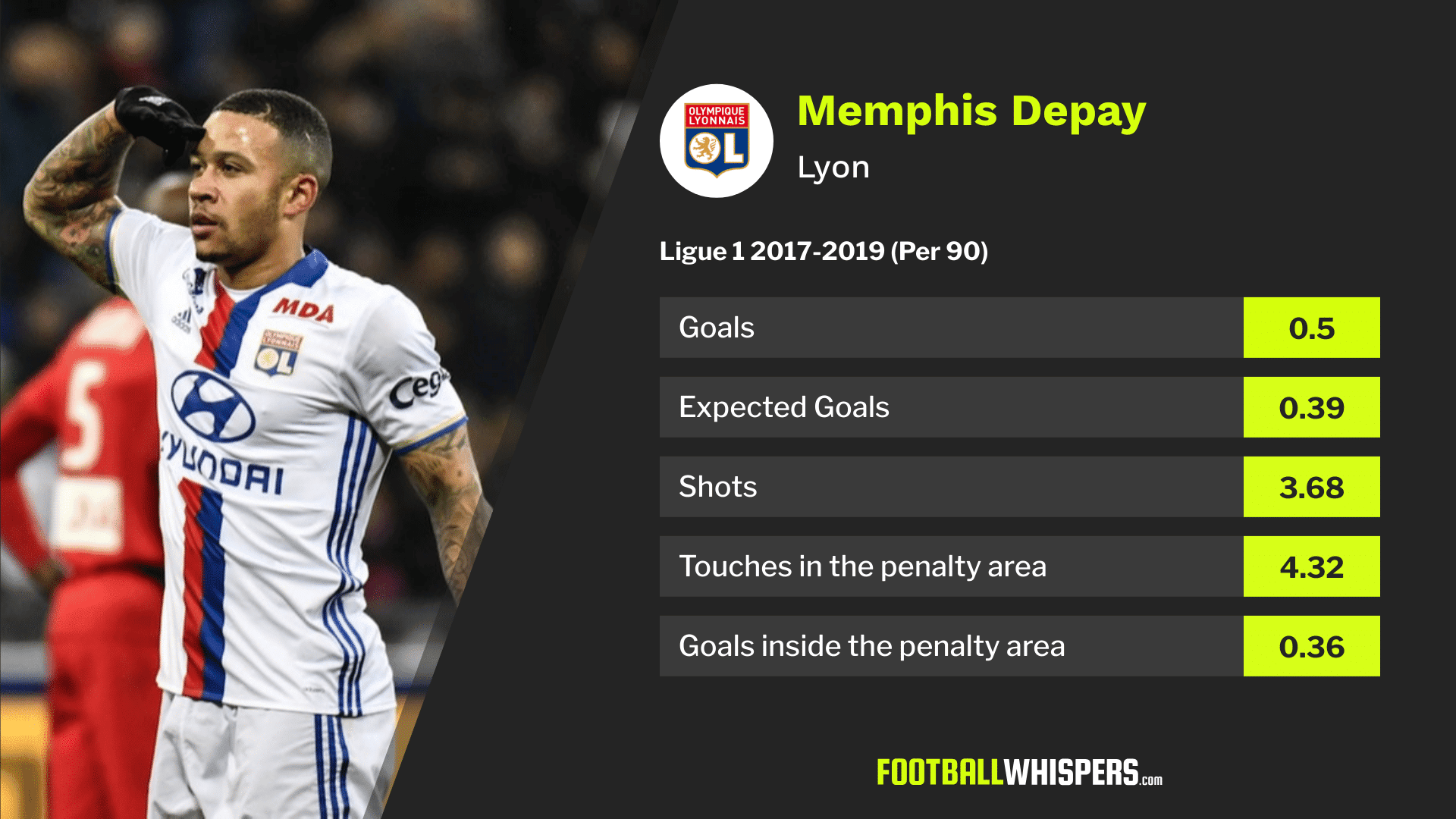 For Lyon, he's a reliable goal threat. He's netted 29 times over the span of two seasons to give him a per 90 average of 0.5. Only 11 forwards in the league can better that, three of which ply their trade in Paris, while just two of them on the list can be described as wide forwards in Neymar and Florian Thauvin. Depay's goalscoring rate stands up against the best in the league.

He's outperforming his expected goals average but elite forwards often do. Given he's done it for two solid seasons now it hints at this being sustainable and nothing to flag.

He's ranked fifth for shots per 90 but just shy of 50 per cent of those come from outside the area. It's an area of his game he'll have to improve, especially when 72 per cent of his goals come from inside the penalty area. If he improves his shot efficiency he'll likely see his goal return climb.

This ties in with the touches in the penalty area stat. If he takes fewer shots from outside the box then the number will likely swell. The more touches in the area, the more likely you are to score. For example, Sadio Mané averaged just 0.29 more touches in the opposition's box on a per 90 minute basis in the two seasons with Southampton, but since the move to Liverpool that stat now comes in closer to six.

He will need to improve his finishing, however. Despite the impressive goal return, he does only score 0.27 of big chances on a per 90 basis. For context, Salah scored 0.38 of his and Mané finishes 0.43 of his. 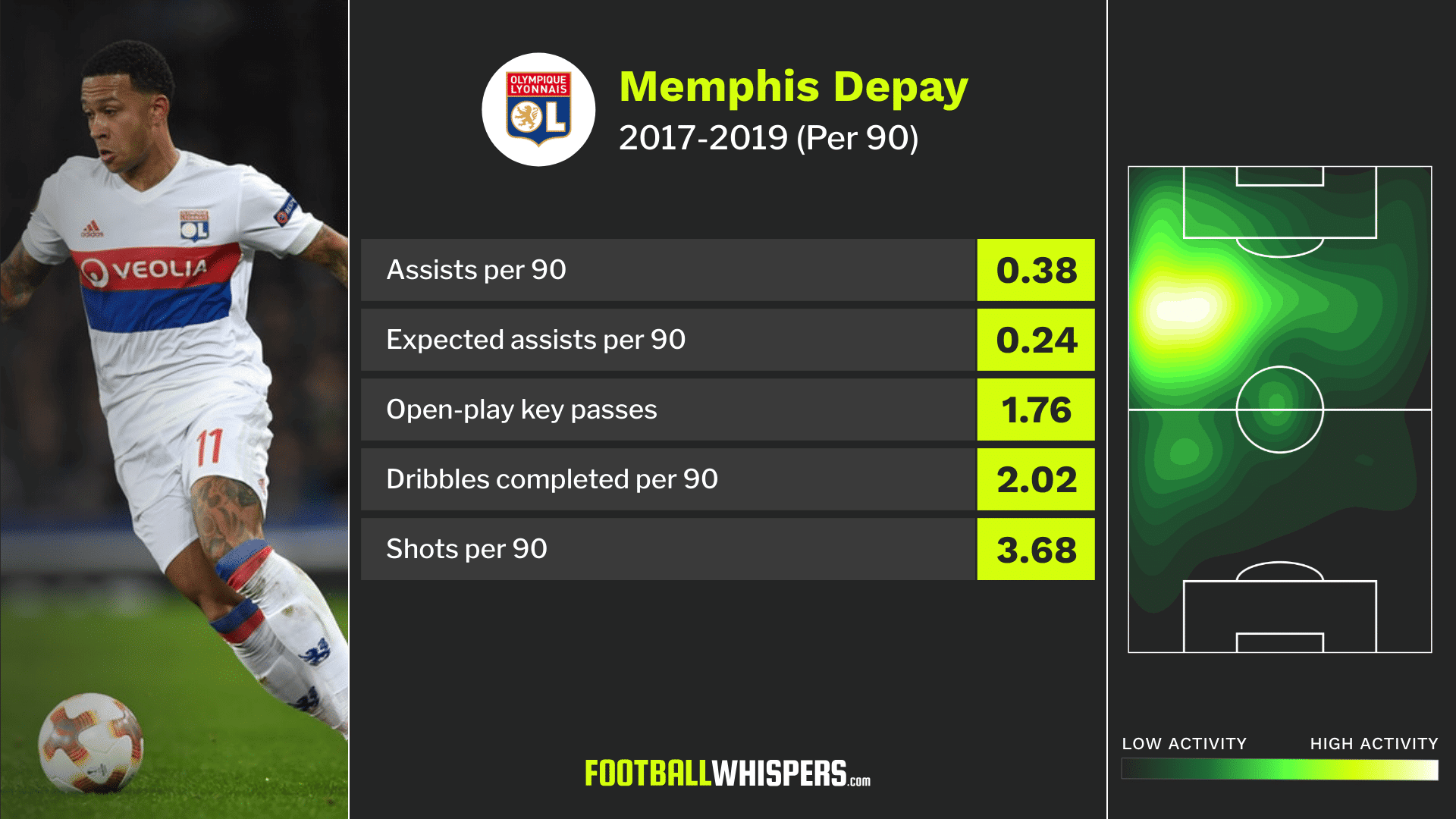 As a creator, he ticks a number of boxes. His 0.38 assists per 90 sees him ranked third in Ligue 1. He outperforms his expected assist average of 0.24 but even that total sees him make the top 10 showing he is a reliable playmaker.

The 0.48 big chances he's created can only be bettered by Neymar, while his 1.76 open-play key passes show he's a bit of a maestro when in possession. He can break the lines with incisive passes and he can break them by going on a slaloming dribble. He attempts 3.61 per 90 and completes just over two of those giving him a 55 per cent success rate.

The £50million fee being mooted by French media seems about right for Depay. It's also a price many of the top teams in the Premier League could afford.

All in all, there's something there with Depay. He's unpredictable yet reliable. A creator and a goalscorer. His versatility is something managers want in their squad. Even though he failed to set the Premier League alight he still knows about the physical demands. In theory, this should quicken the settling in period many players need when moving leagues.

There are no guarantees in football but when players have something to prove, which Depay does after his ill-fated 18 months at Old Trafford, they usually deliver. The hype is very much warranted on the form he's shown for Lyon.