It was exactly two years ago that a 19-year-old Waldemar Anton made his first start for Hannover 96 in a 2-2 draw against Hertha Berlin. Just a few days prior Anton had scored for the reserves in the fourth tier of German football against Eintracht Norderstedt.

With Anton's help Hannover would go on to take eight points from their last six games.  The youth product with Uzbek roots – he's previously talked of sending money back there in an interview with Sportbuzzer –  has been at the club since his transfer from Mühlenberg (a suburb of Hanover) in 2008 and has captained the Under-19s.

Michael Frontzeck, with whom the 96ers had narrowly escaped relegation the previous year, ended up quitting during the winter break, citing a lack of support from the board.

Legendary Werder coach Thomas Schaaf did no better with ten losses from 11 games so Anton’s Under-19 coach, Daniel Stendel, was forced to take over with a chance to give young players playing time in preparation for the second division.

In true Hannover fashion, Stendel, sitting only in fourth place with a side destined to get back into the Bundesliga, was fired in March of 2017. André Breitenreiter, let go by Schalke in the summer of 2016, successfully reunited with sporting director Horst Heldt – who had also fired by Schalke – to take the 96ers back to the promised land with 21 points from their last nine games.

This season Breitenreiter surprised the Bundesliga with a tactical innovation that Constantin Eckner of Spielverlagerung has called “the Anton-Shuffle”.

The idea was to deploy the versatile and physical Anton as a centre-back and a defensive midfielder in the same game. It isn’t a novel idea; dropping a defensive midfielder back as a deep-lying playmaker to help build-up in possession and then pushing up into midfield against the ball is as old as Xabi Alonso himself.

Breitenreiter’s adjustment in the game against Domenico Tedesco’s aggressively pressing Schalke, lining up in their 3-4-3, was to flip it around. Anton would drop back against the ball to match up one-v-one against former Chelsea forward Franco di Santo, but would push forward into midfield when Hannover had the ball creating a three-v-two against the Schalke central midfield. 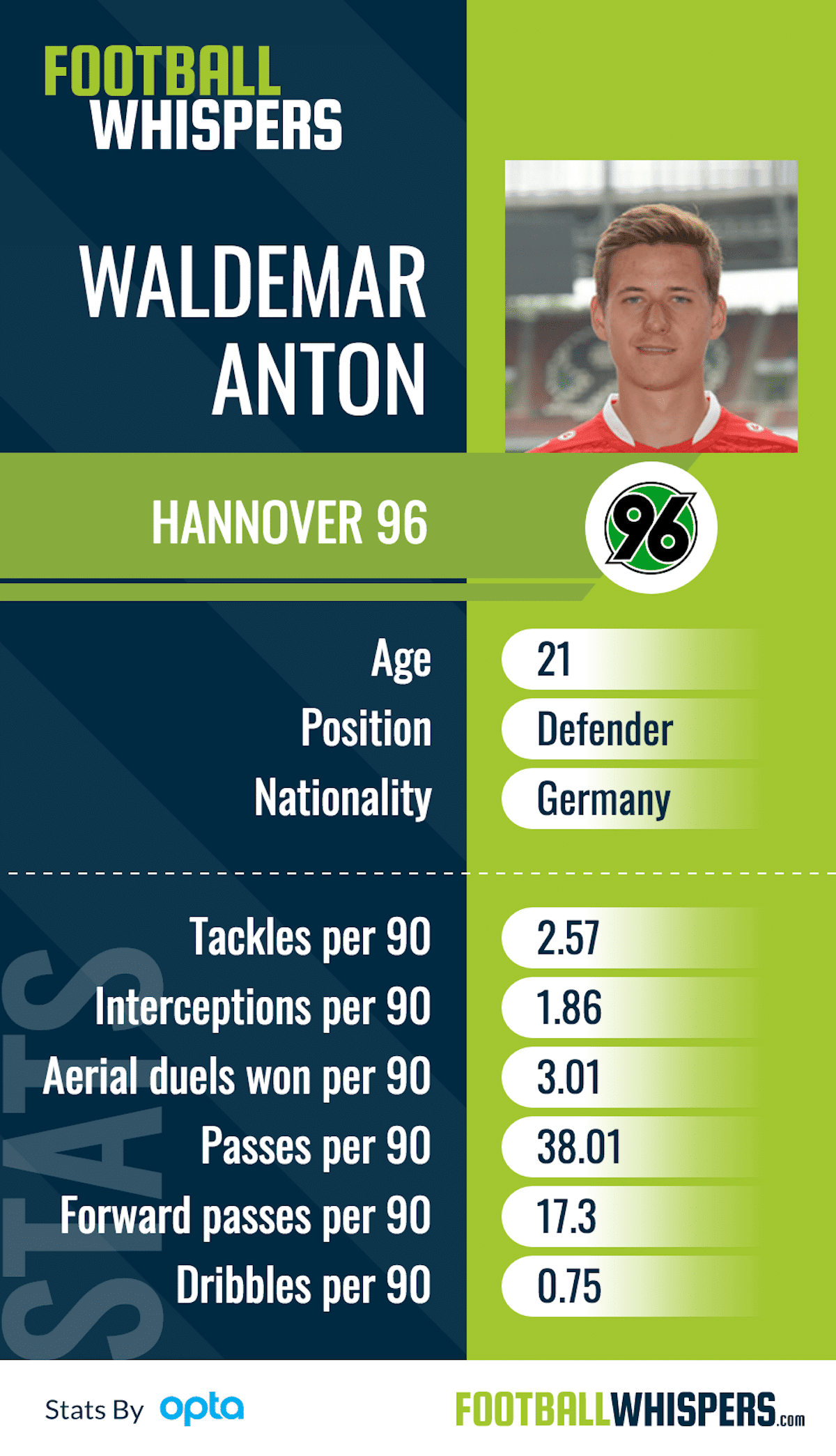 As Spielverlagerung founder Tobias Escher explains: “Breitenreiter knew that mirroring the opponent’s formation would lead to one-v-one duels, where Schalke would likely have the edge and he wanted to avoid that. By keeping the full-backs back in a four chain and pushing Anton up, he was able to have a four-v-three in the first phase of the build-up and a three-v-two in midfield.”

It worked brilliantly. Hannover surprised Schalke 1-0 and went unbeaten until matchday seven. After a 4-2 dismantling of Borussia Dortmund they even sat fourth after ten matches.

Through a combination of numerous injuries – including Anton on Germany Under-21 duty – the 96ers have tumbled down the table with just 17 points from their last 19. Giving up 1.78 goals per game in the last 19 vs. 0.9 in the first ten matches hasn't helped.

The youngster, however, has continued to impress. Germany’s football bible Kicker, a traditionally conservative outlet that favours big-name players at larger clubs, still ranks him 45th among all outfield players and 24th among all midfielders ahead of stars like Arturo Vidal, Emil Forsberg, Christian Pulisic and Leon Goretzka.

In a breakout season for Anton, his Transfermarkt value has skyrocketed from £2million in June to £9million and he was recently voted Lower Saxony Player of the Year.

A substitute for the German Under-21 side that won the European Championships last summer, he has now become a starter alongside Jonathan Tah. It’s a massive accomplishment given the incredible depth of centre-back talent and a testament to Anton’s improvement.

Anton has had a better season than Stuttgart’s Timo Baumgartl, and soon-to-be Schalke team-mates Thilo Kehrer and Marc-Oliver Kempf – the latter moving from Freiburg on a free transfer according to reports – while overtaking Niklas Stark and Gideon Jung in the pecking order as well.

The international break saw him play the full 90 for Germany twice before suffering a season-ending muscle injury during the loss against RB Leipzig.

What are Anton's strengths?

The first thing that jumps out is Anton’s physicality. He has won a total of 76 aerials (at 70 per cent success rate) and 65 tackles, both ranking above the top 95th percentile while also leading the Bundesliga in defensive challenges attempted and making the top ten in tackles and top 20 in aerial duels.

He has his limitations when it comes to foot speed and tracking runs, but they could be aided by playing him in more of a defensive midfield role and/or pairing with a speedy centre-back partner.

His passing accuracy (80 per cent) should be taken with a grain of salt, for Anton often picks safe backward passes (in the top 87th percentile in the league). Though some of the backward passing is because he's playing in defensive midfield, his 157 total long balls are in the top 92nd percentile. That volume is most likely down to Anton needing to play more at centre-back due to injuries to Felipe, and the poor performance of his replacements.

Anton has shown some flashes of playmaking as a defensive midfielder, using his frame to move up field, past pressure, and find open wide players and/or pick out pockets of space against light pressure.

In front of the goal, he’s mostly a threat on set pieces with almost 85 per cent of his xG (expected goals) total coming from those situations and nearly half of his total shots (13 of 29) headers.

Where next for Anton?

His long-term future looks extremely promising as versatile, physical and combative centre-backs-cum-defensive midfield hybrids who can offer a hint of passing and playmaking are very much in demand.

By all accounts, Anton is an extremely hard worker, has a good head on his shoulders and exhibits strong leadership qualities. Prior to his injury there had been scouts from Milan watching him but, given the setback, it’s more likely that Hannover will accept a bid for Salif Sané as they won't want to lose two of their best players in the same summer.

Given the short careers of peers like Caglar Söyüncü and Benjamin Pavard, if Anton is able to build on his tremendous debut season after his injury, it’s probably only a matter of time before he’s playing for a much bigger club.