The LaLiga champions parted with a fee believed to be in the region of £25million to secure the fleet-footed attacker from Braga. He’ll join his team-mates at the Camp Nou in July and has an eye-watering release clause in his deal. Any club wanting to prise him away from Barça's clutches will have to pay £450million if they want him. That clause alone shows how highly Barcelona's hierarchy value their new signing.

The soon-to-be Barça player was quick to ease any concerns the Braga faithful may have about his commitment in the remaining months of the season.

“It's a dream come true to be able to wear the Barcelona shirt from July 1 and it will be a great honour,” Trincão said. “But I want to make clear to Braga supporters that until that day, I will give body and soul for the Braga cause.

“My commitment and focus is on helping Braga be successful in all the competitions they play in.”

The Barcelona website were quick to talk up their latest signing, declaring: “Trincão is quick and technically gifted with a vision that means he is a great creator of goals as well.

“The new Barça player also has the ability to take defenders on with his dribbling skills.”

The way he’s described paints a picture of a player with Barcelona DNA. This term, Trincão has averaged 0.86 goals and assists per 90 in the Portuguese top flight. The sample size isn’t the largest but there’s a lot to take from those numbers. He’s a goal threat; creating for team-mates as well as scoring himself.

Trincão is an aggressive ball-carrier, attempting almost six dribbles per 90 and completing close to 70 per cent. The 20-year-old sees a lot of the ball in the area, averages six touches per 90 in the opposition’s box, and creates 3.5 chances (per 90). 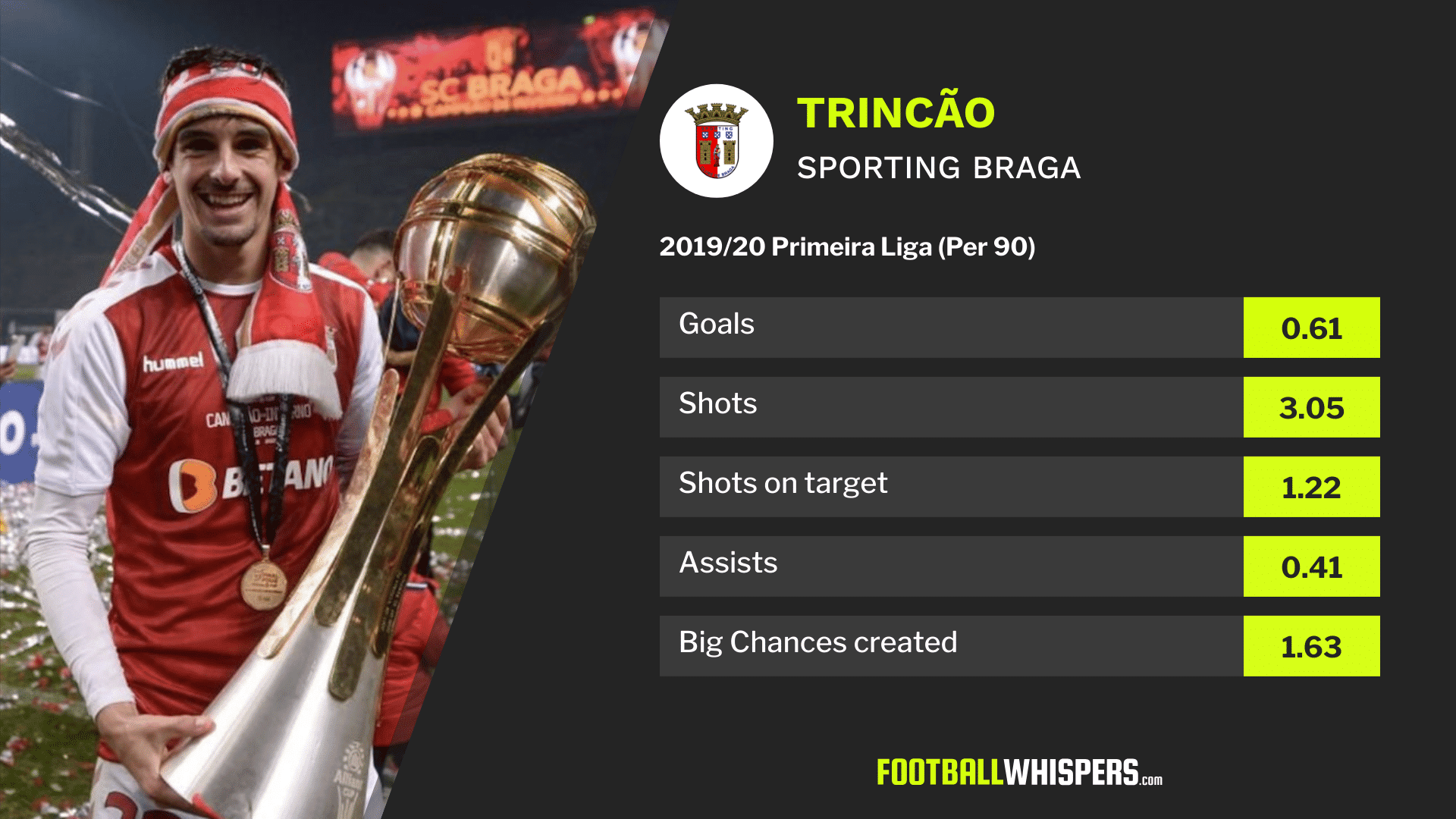 All of these are transferable so long as Barcelona allow Trincão to be the player that convinced them to part with big-money to sign him. A nimble-footed playmaker on the right flank, he thrives when he's allowed to cut inside onto his left. He's explosively quick, both in and out of possession, but there's a calmness to his game which gives off the impression that he's always in control, no matter the situation.

The Ronaldo comparisons stem from him being 6ft 1in and Portuguese. Very few wide forwards in the world have the presence of the Juventus No.7 – and nor does Trincão, but he has the potential, in spades.

He's also a powerful dribbler, another trait he shares with his compatriot. However, Trincão is still very raw which means Barcelona will be able to mould him into the player they need him to be.

Barcelona don’t always have the best of luck when it comes to Portuguese wingers but Trincão could exorcise the ghost left behind by Ricardo Quaresma.