Lucas Ocampos hit the headlines at the weekend but it wasn’t for the reasons Marseille would have wanted.

The home side had been snipping at the Brazilian’s ankles, and the Argentine got the last one in, fouling him from behind. Neymar reacted, pushing his head towards Ocampos. The 23-year-old went down heavily, over-reacting, rolling around.

It had the desired effected: both players picked up a caution and the referee gave PSG’s star man his marching orders.

That upset the league leaders and Edinson Cavani’s last gasp free-kick beat Steve Mandanda and the Parisians fled north with a point.

Just ten games into the Ligue 1 campaign, Ocampos found himself as the focal point of Marseille’s season. Something that looked impossible back at the start of August.

Going into Sunday’s fixture with Lille, Ocampos has four goals, second only to another of Marseille's forgotten heroes Clinton N’Jie, and joint-tenth in Ligue 1.

It is perhaps more of a contribution to OM’s season than anyone would have expected over the space of 38 games, not just five starts.

Monaco spent €13million on the then-16-year-old wonderkid back in 2012, a huge amount of money to pay River Plate for a team playing in the second division.

Under the guidance of Claudio Ranieri, the Principality club took their time to bleed him into French life.

In his 12th game, Ocampos was the difference, scoring his first goal and picking up an assist in the 2-0 win over Istres.

At the end of the campaign he finished with four goals and three assists in 29 appearances. A solid return for a teenager.

Life in Ligue 1 was a little tougher. Playing with Radamel Falcao, James Rodríguez and Yannick Carrasco, starts were difficult to come by and he began just 11 of 37 games.

After another half-season, he went on loan to Marseille to continue his career under Marcelo Bielsa. The expectation was that he would flourish under the guidance of the mercurial coach. He didn’t.

Only once would he play 90 mins, scoring twice in 14 games.

Then, with reasons unknown to anyone, OM, with Bielsa’s blessing, signed him permanently for €7.5million.

After the first home game of the campaign, a 1-0 loss to Caen, Bielsa quit, leaving his signing high and dry.

Loan spells at Genoa and AC Milan followed, but neither Italian club could unearth the gem that arrived in Monaco back in 2012.

He made 26 appearances in Serie A, contributing to just five goals.

Back in the south of France this summer, there was little to no expectation to what he could bring to the team this season.

Going into new campaign no one had Ocampos playing a starting role.

Against Angers in week three he got the start, played 90 minutes, but then was unable to feature against both Monaco and Rennes.

Marseille had lost both games, but won at home to Konyaspor in the Europa League. Changes came in the away trip to Amiens, with Ocampos at the heart of their 2-0 victory.

Yet, what stood out was his defensive effort, making five tackles – the same as defensive midfielder André-Frank Zambo Anguissa – one interception and two clearances. He harried and harassed the home side, setting the tone for Marseille’s effort.

Playing off the left-wing, what has changed in Ocampos' game this term is his desire to get in the box, not to hang outside.

Since day one, he’s never looked the fastest player, so not a traditional winger that will beat his marker on the outside.

From the first minute against Toulouse, you can see what he wants to do. 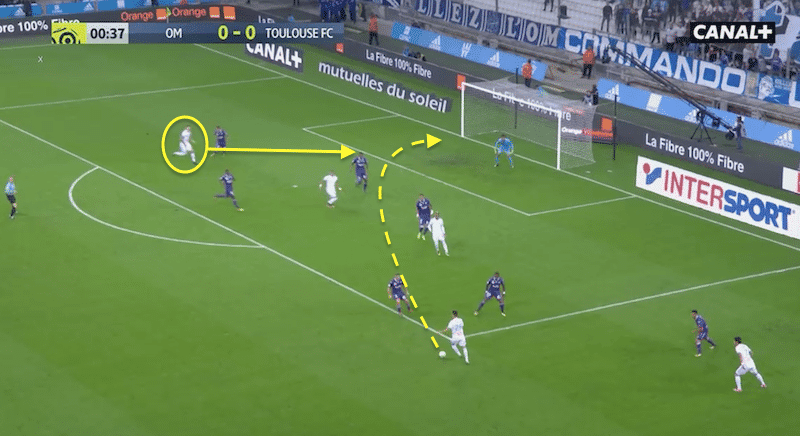 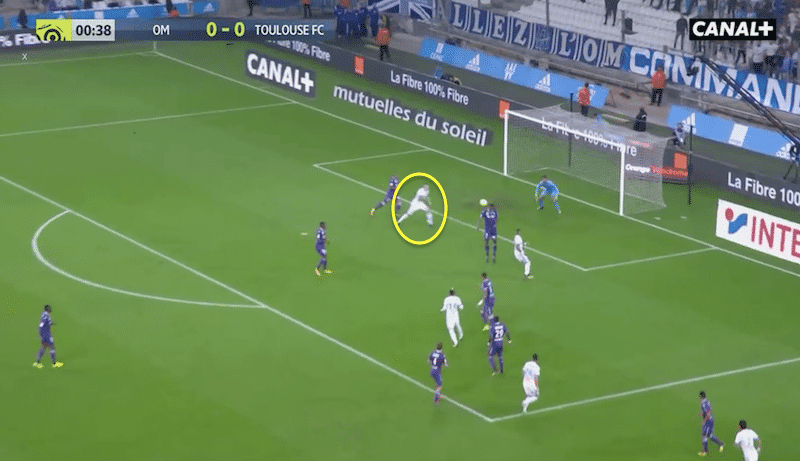 As soon as Florian Thauvin gets the ball on the right, the Argentine makes his move, cutting across his marker, looking for that pass.

It paid off on the half-hour: he attacked the six-yard box, the ball fell to him and he was credited with an assist as Thauvin bundles over the line.

Not a classic assist, but it got him off the mark.

The same can be said about his opening goal of the season 30 minutes later. Dimitri Payet swings in the cross, Ocampos is in the box and the ball comes off his thigh and is knocked past Alban Lafont to make it 2-0.

You make your own luck, and when you put yourself in the right positions, it can pay off.

Scoring against Nice, it was another positive run into the penalty area that saw him volley the ball into the net as Marseille started their comeback in a 4-2 victory.

His second put them ahead, but again it was nothing to write home about. Luiz Gustavo fired off a shot that Yoan Cardinale had to save, Ocampos was there to head in the rebound from two yards out.

It was an opportunistic leap and showed aggression, desire and a new-found belief.

Thauvin is the star of this team, he is top in terms of shots and completed dribbles. Payet is still the creator with 3.9 key passes per 90.

However, Ocampos is out-performing the former West Ham United star. He is firing off 3.3 shots per 90 and completing 74.3 per cent of his 3.3 dribbles.

Most importantly, no one else in this Marseille team has a higher expected goal (xG) rate at 4.66 – that measures the quality and likelihood of finding the back of the net from shots. Way ahead of Payet on 0.85 xG.

His superb volley against Vitória Guimarães was his best of the season, and he later combined with Maxime Lopez for the winner.

Despite all his misgivings and failings, it's easy to forget that Ocampos is still only 23 years old. He still has time to develop further and become the player Monaco obviously thought he could be.

Confidence is flowing in the Argentine forward and it feels like he has finally found a way to be productive and use his assets to produce an end product.

“When a coach and a team have faith in you it changes everything. Even the best player in the world needs that. I'm savouring it,” he admitted to Ligue1.com at the start of October.

“On the first day of our pre-season camp in Switzerland we didn't talk much, but I wanted to give it my all in order to prove that I deserved to stay.

Rudi García made the change from 4-3-3 to 4-2-3-1, opening another position in the midfield and Ocampos has pounced and made the position his own.

The former Roma coach loves his energy and work-rate and that has been the starting point from his attacking play.

“It's just a start as I've only played five league games,” he told local paper La Provence. “My objective is to keep at this level all season long. The last two months have been great for me. Things are going well and I'm beginning to feel important.”

Marseille are aiming for a Champions League return, that is their ultimate goal over the next two seasons. They are currently fifth, just four points behind Monaco in second and now, rather than being on the outside looking in, progression looks steady. Ocampos is a huge part of their success.

The next test for OM over the next 12 months is whether they can hold on to him once the Premier League vultures begin to circle.