Foreign born players have had an important role in the Italian national team’s historic successes. When the Azzurri won their first World Cup in 1934, they did so with several squad members who were born outside of the Bel Paese. These included Anfilogino Guarisi, an attacker born in Sao Paulo, Brazil as well as multiple Argentine-born players, such as fleet-footed winger Raimundo Orsi and centre-half Luis Monti, who was integral to Vittorio Pozzo’s ‘metodo’ system.

When they defended their title in 1938, a man by the name of Michele Andreolo performed at the base of midfield. Andreolo – whose real name was Miguel – was born in Carmelo, Uruguay and began his career with the Montevideo club, Nacional before joining Bologna.

Italy didn’t win another World Cup until 1982, by which point a Libyan-born hard man was marshalling their defence. A tenacious marker and an uncompromising tackler, Claudio Gentile moved to Italy at the age of eight and would become a key component in the great Juventus side of the 1970s.

Most recently, in their 2006 triumph, Italy fielded a team that included a player who didn’t know the words to their national anthem. Born in Tandil, Argentina, Mauro Camoranesi signed for Verona in 2000 at the age of 23 before joining Juventus, and soon after he was called up by the Azzurri. He was joined in the 2006 World Cup-winning side by Simone Perrotta, a dynamic midfielder who was born and spent his early childhood years in Ashton-under-Lyne, England.

With a large diaspora, Italy have always been able to call upon their oriundi (natives) and those individuals have in turn enjoyed a major role in Italy’s past achievements. Their inclusion has been debated over the years, but they continue to play a part to this day.

When Antonio Conte names his squad for Euro 2016 there is a high chance that more than one foreign born player will be on the list. And, once again, if Italy are to progress this summer, the oriundi will be crucial.

Born in Lauro Muller, Brazil, Eder’s great-grandfather hailed from Veneto in northern Italy. This alone would have qualified him to represent the Azzurri, though he was also able to thanks to his own citizenship, having lived and played in Italy for over a decade.

After making it through Criciuma’s youth academy, he left Brazil as a teenager to sign for small-town Tuscan side Empoli in 2005. And, after a successful loan spell with Frosinone, he quickly established himself as one of the most prolific forwards in Serie B.

However, for a long time it looked as if that was as high up the Italian league structure Eder would get. He spent time in the top tier on loan at Brescia and Cesena, but both ended up with few goals and relegation.

In early 2012 he arrived on loan at Sampdoria and he didn’t look back, helping the club to promotion and gradually developing into an effective Serie A player. His bustling energy, skill and directness, combined with sound technique, saw his goals tally increase year on year.

This improvement in form led to an Italy call up in 2015. From there, Eder became an important tactical component in Conte’s side, playing as the foil to Graziano Pelle up front.

While much of the spotlight regarding Napoli’s title push this season has fallen on the attacking double act of Gonzalo Higuain and Lorenzo Insigne, arguably the team’s most valuable asset is their midfield pivot, Jorginho.

The 24-year-old is the cog in the Partenopei’s passing machine. He is the first player the defenders look for in the build-up, and he is the man often tasked with progressing the ball safely into more attacking areas. His defensive coverage is underrated, and his passing range is first rate. He is one of the finest deep-lying midfielders in the world, and he could represent Italy this summer.

Jorginho moved to Italy at the age of 15 having been born in Imbituba in southern Brazil. Within a year he had joined Verona’s youth academy, and – after a loan spell in Serie C with Sambonifacese – he would graduate to the Butei’s first team by 2011. He then helped the club to promotion and quickly asserted himself as a quality Serie A player, before Napoli swooped to seal his signature halfway through the 2013-14 campaign.

He was initially seen as a possible long-term replacement for Andrea Pirlo for the Azzurri, but he endured a disappointing first eighteen months in Naples under the auspices of Rafa Benitez. However, since Maurizio Sarri took charge last summer, he has begun living up to his early billing.

He made his debut for Italy in their recent friendly with Spain and, with Claudio Marchisio out and doubts surrounding the fitness of Marco Verratti, he could be a midfield revelation for his country at this summer’s finals.

Born in Darmstadt to Italian parents, Roberto Soriano’s first footballing steps came with the local team, SV Darmstadt 1898, before joining the youth sector of German giants, Bayern Munich in 2006. There he would train and play with Nicola Sansone, who currently stars for Sassuolo and was also born in Germany to Italian parents.

By 2009 it became clear that the route to first team football with Bayern was narrow. Soriano decided a move to Sampdoria would be more beneficial for his development and so he joined the Genovese club for an undisclosed fee, immediately settling in their Primavera and starring in the Torneo di Viareggio.

After being sent out on loan to Empoli in Serie B in 2010, he returned to the Blucerchiati following their relegation to the very same division. And, after struggling to make his mark in the club’s promotion season and subsequent survival, he would finally break out in 2014.

With his probing movement, ability to find space between the lines and smooth passing, Soriano has since shown his qualities as a trequartista or a central midfielder, from where he can link the play and advance into dangerous areas. It is these traits that saw him called up to Conte’s national side and, despite average recent form, he looks likely to go to Euro 2016 with Italy.

A brief note on other players 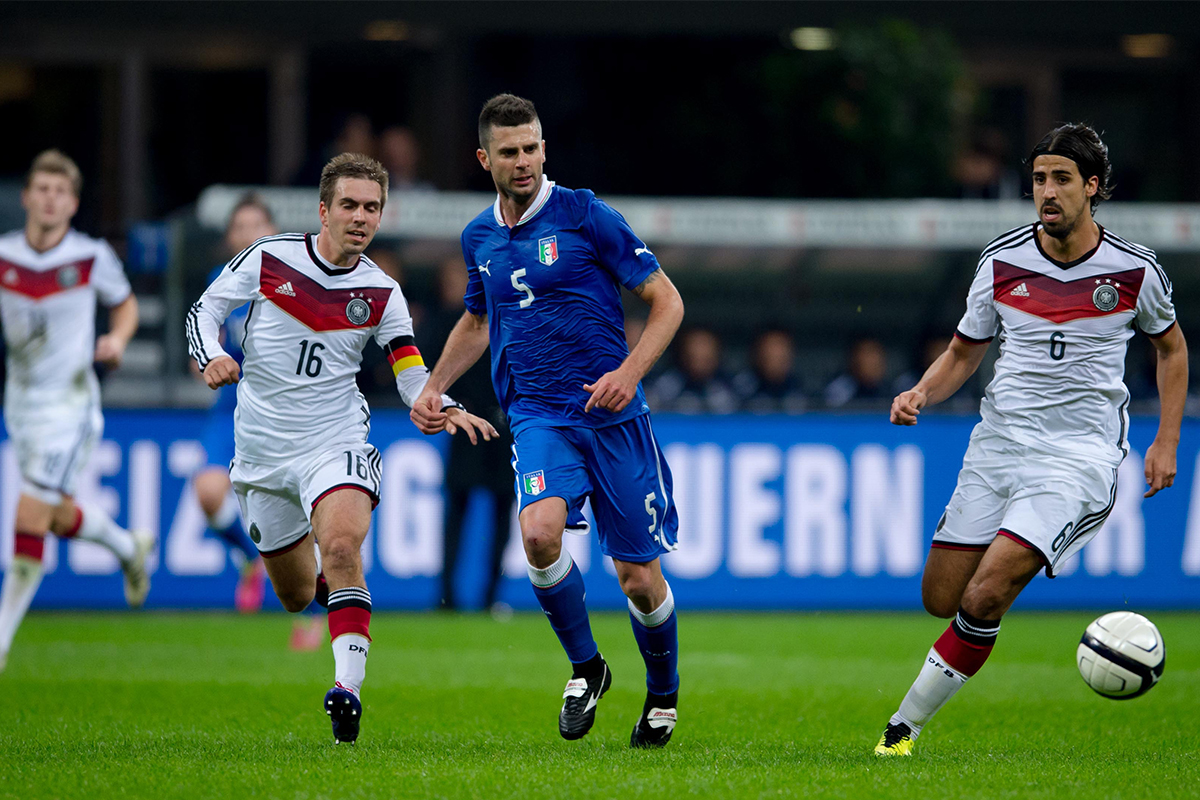 Thiago Motta, born in Sao Paulo, Brazil, will also play for Italy in this summer’s finals. Having made two friendly appearances for the Selecao he was brought into the Azzurri fold in 2011, something enabled by the fact his great-grandfather was from the Veneto. Now 33 years old, this may well be his last major international tournament.

Two other players may come into contention after this summer’s finals. Both Franco Vazquez (born in Argentina) and the aforementioned Sansone have Italian ancestry and were capped by Conte last year. Neither are likely to go the European Championships in France, due mainly to competition for places and Conte’s tactical preferences, but it is difficult to imagine them being excluded going forward. At 27 and 24 respectively they have plenty of time on their side to shape Italy’s footballing future.