Youth may actually be the future at Chelsea. They have won so much at youth level in recent years, but have been criticised for failing to properly bring an academy product through since John Terry.

Yet, Andreas Christensen is proving himself to be a key part of the Blues’ backline and there are high hopes for Ruben Loftus-Cheek and Tammy Abraham, both of whom are currently away from Stamford Bridge on loan, but are now full England internationals.

Perhaps the latest name to add to the list of academy graduates with an actual chance of featuring more regularly for Chelsea is Dujon Sterling.

Having just signed a new contract with the Blues until 2022, the right-back is also travelling with the squad for their Champions League clash with Qarabag, which is a crucial tie for Chelsea. If they win, they’ll be into the knockout stages of the competition.

Despite being in Arsenal territory in Islington, Sterling joined the Chelsea academy at under-eight level and has been with the Blues ever since, rising through the age categories.

At under-16 level, he won the FA Youth Cup and UEFA Youth League, a feat which he repeated the following season, scoring in both the Youth Cup semi-final and final.

On his 17th birthday, in October 2016, he signed his first professional contract with the club.

He is mainly a right-back, but his speed, power and adaptability mean he can play in a number of positions, including wing-back, winger and central midfielder.

You would imagine Antonio Conte would want to use him as a right wing-back in his system.

He does appear to be the fourth choice right wing-back after Victor Moses, Davide Zappacosta and César Azpilicueta.

And the reason for his trip to Azerbaijan is probably due to Moses’ injury – he is the back-up option.

Indeed, it was in that position where he made his Chelsea debut – on September 20 2017, when he came off the bench to replace Zappacosta against Nottingham Forest in the EFL Cup victory.

The England Under-19 international will no doubt be hoping for a small taste of action in Baku too.

What are Sterling’s main strengths?

There’s no doubt that when you watch Sterling, the first thing that stands out to you is his pace.

But he’s not only got pace in abundance, he’s good on the ball with it too, and can really use it to turn defence into attack, a dangerous weapon for any side. 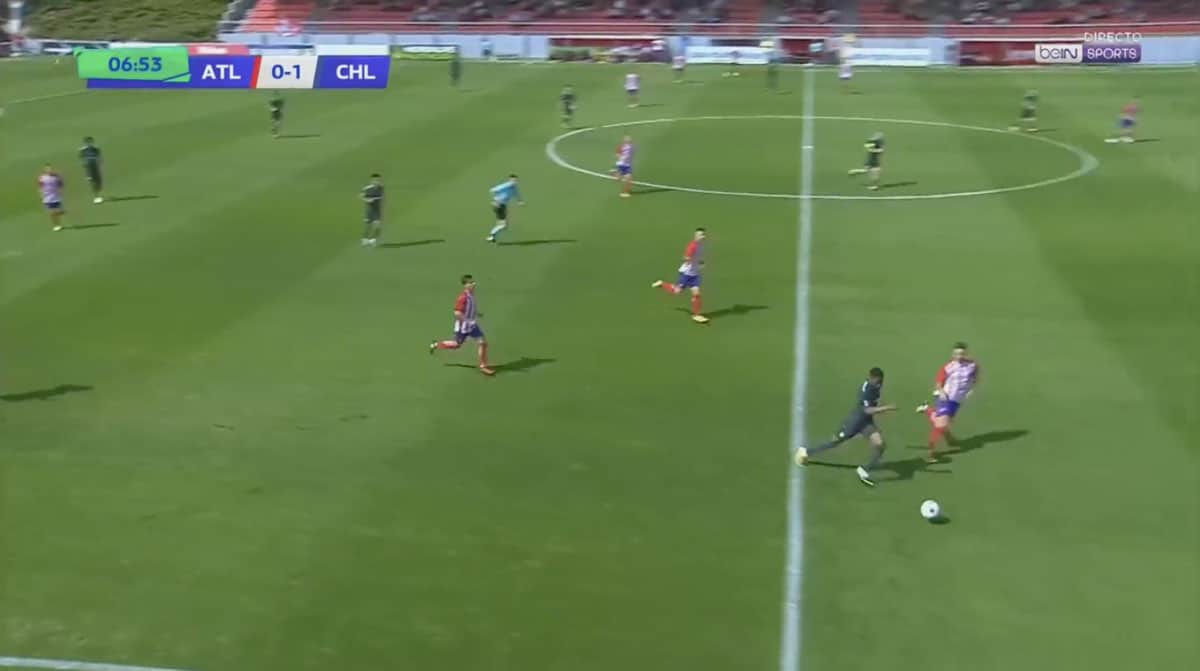 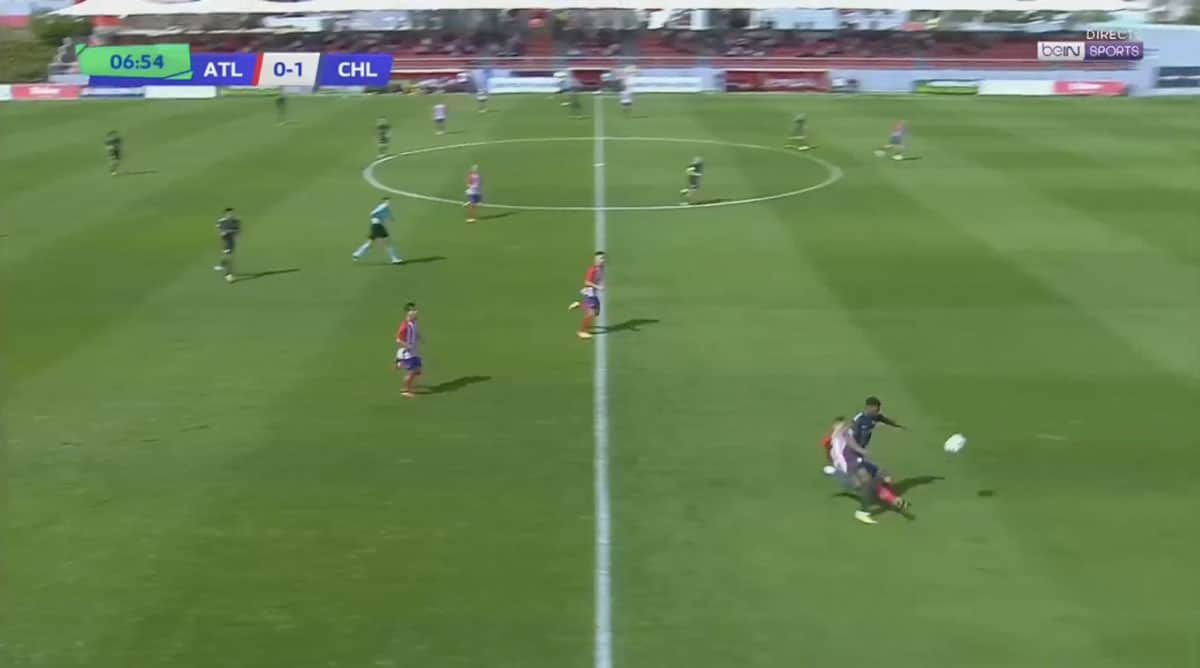 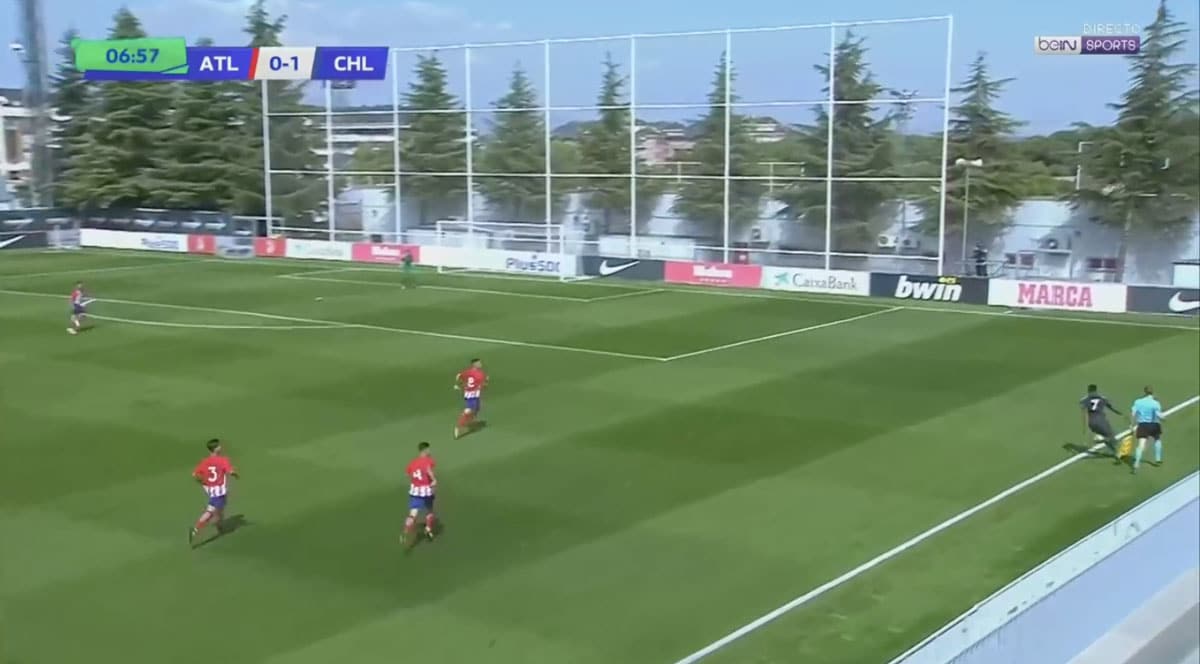 In the stills above, you can see how he collects the ball on the right-hand side, playing slightly further forward, and uses his pace to take it around the defender and fly down the line.

Having that pace is a nightmare for opposition sides to face, as they know a single touch on him and they give away a free kick, but they need to stop him breaking free. 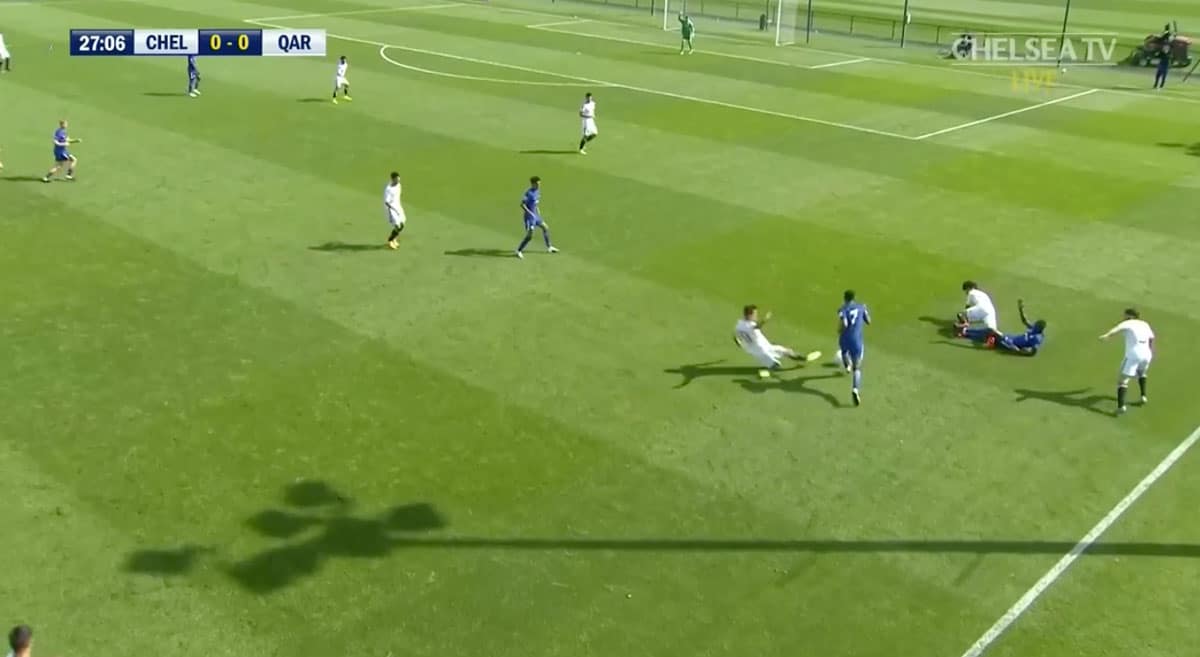 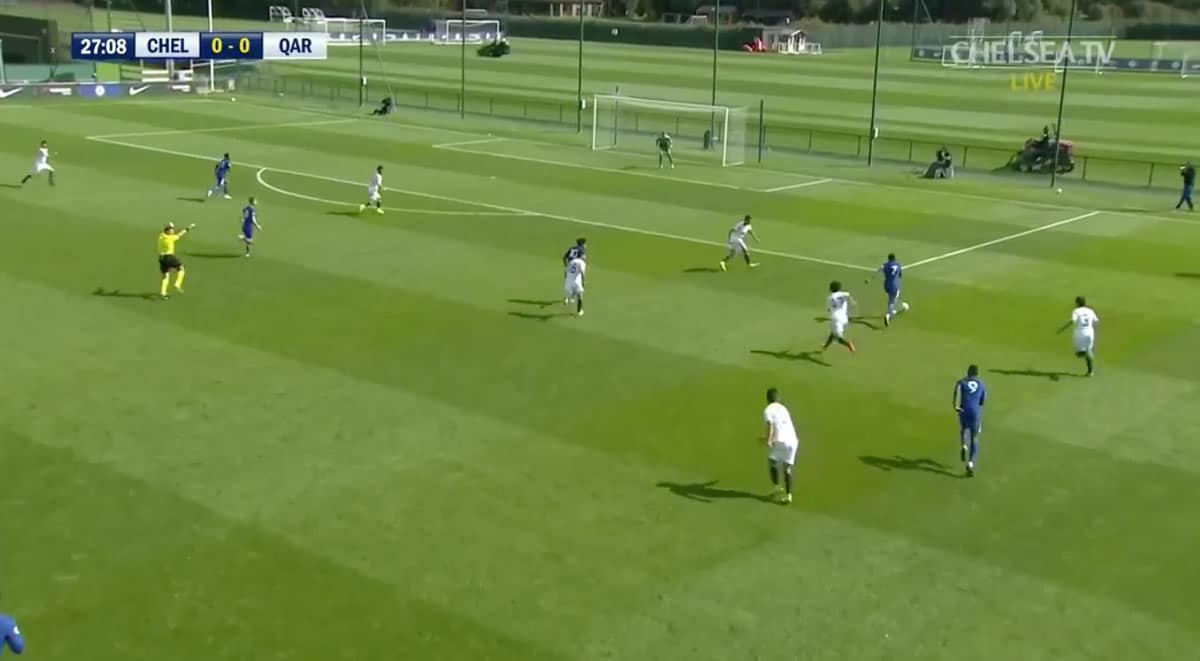 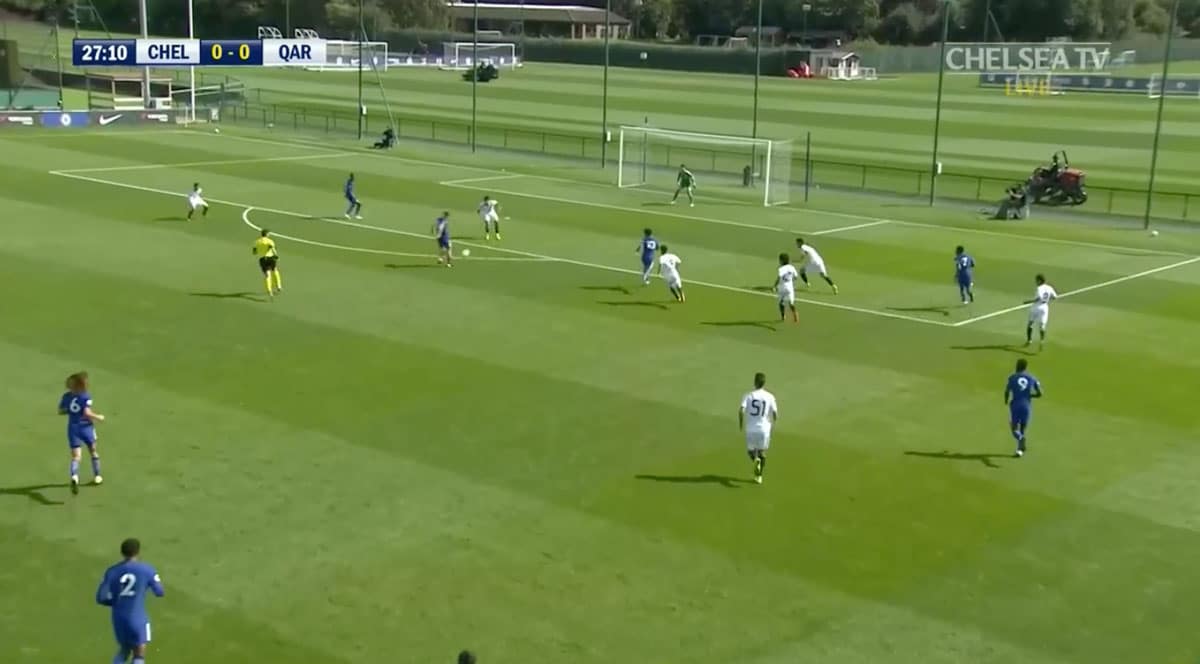 And again, you can see how useful that skill is above.

Sterling (No.7) gets to the ball just before the defender, and uses his pace to get free.

He’s intelligent though, going into the space before cutting it back for a team-mate to get a shot away. 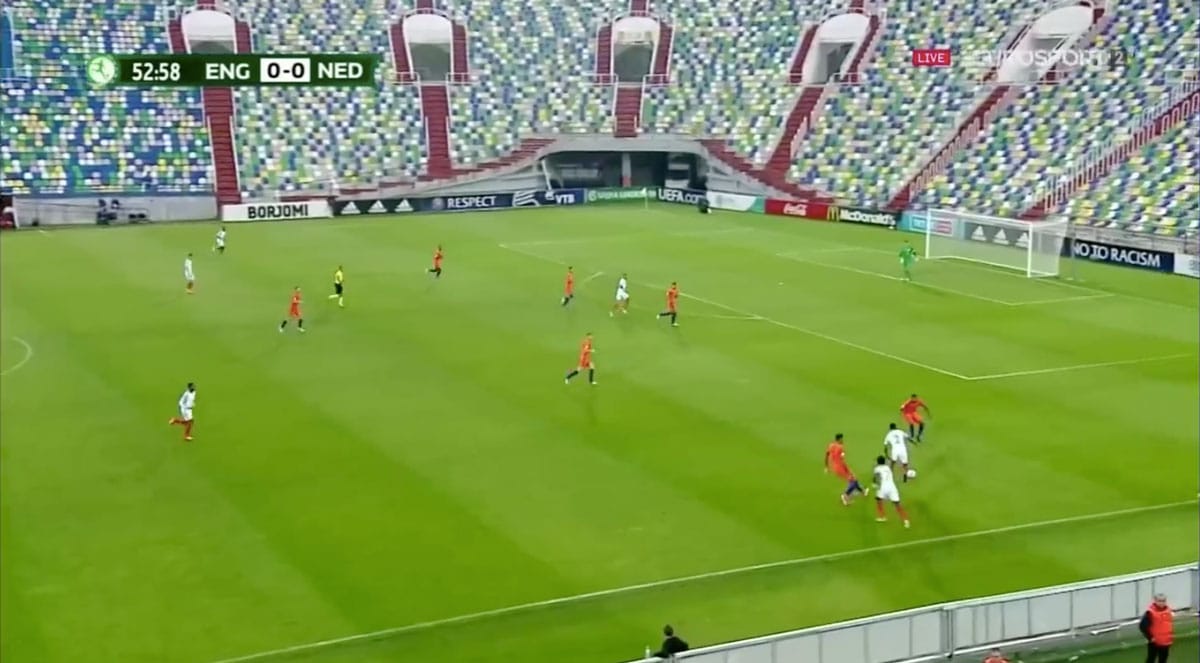 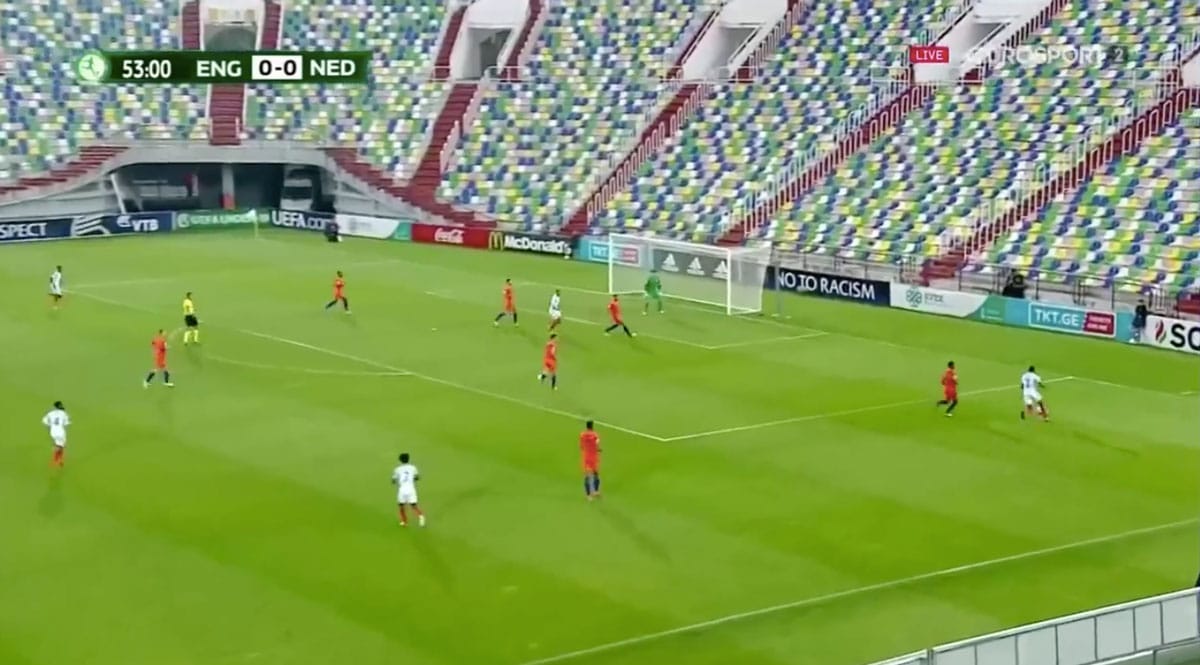 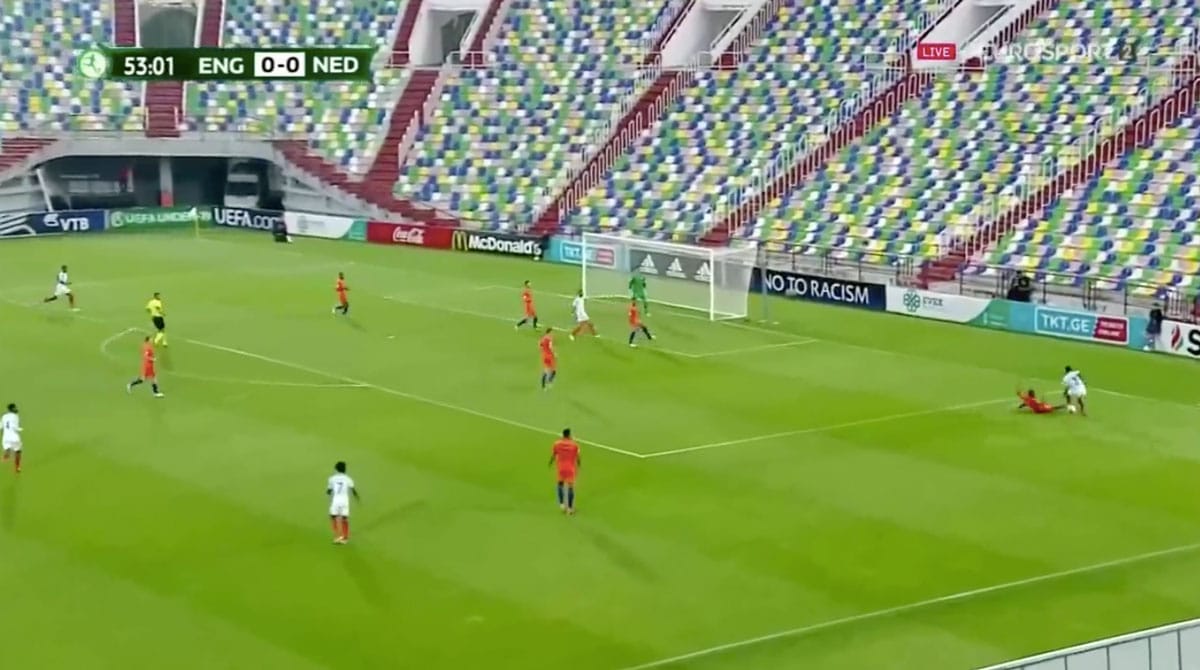 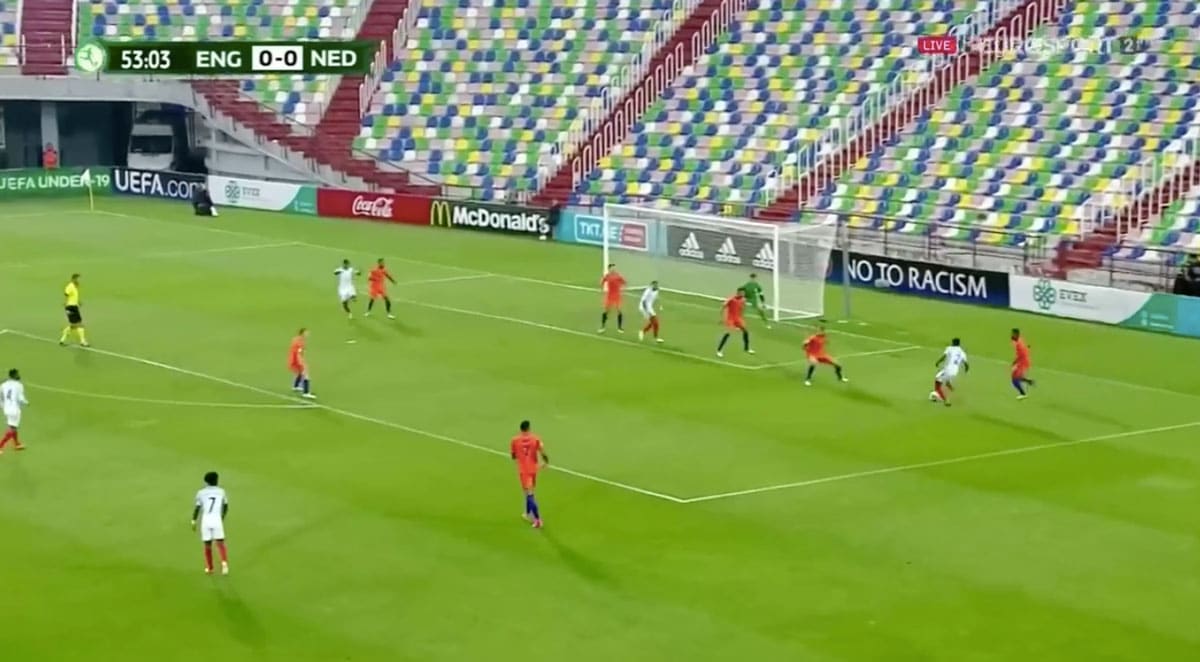 Above, his intelligence is also noticeable. He uses his pace to get down the line, but sends the defender flying when he cuts inside. This gives him the time needed to pick out the perfect pass in a dangerous situation. 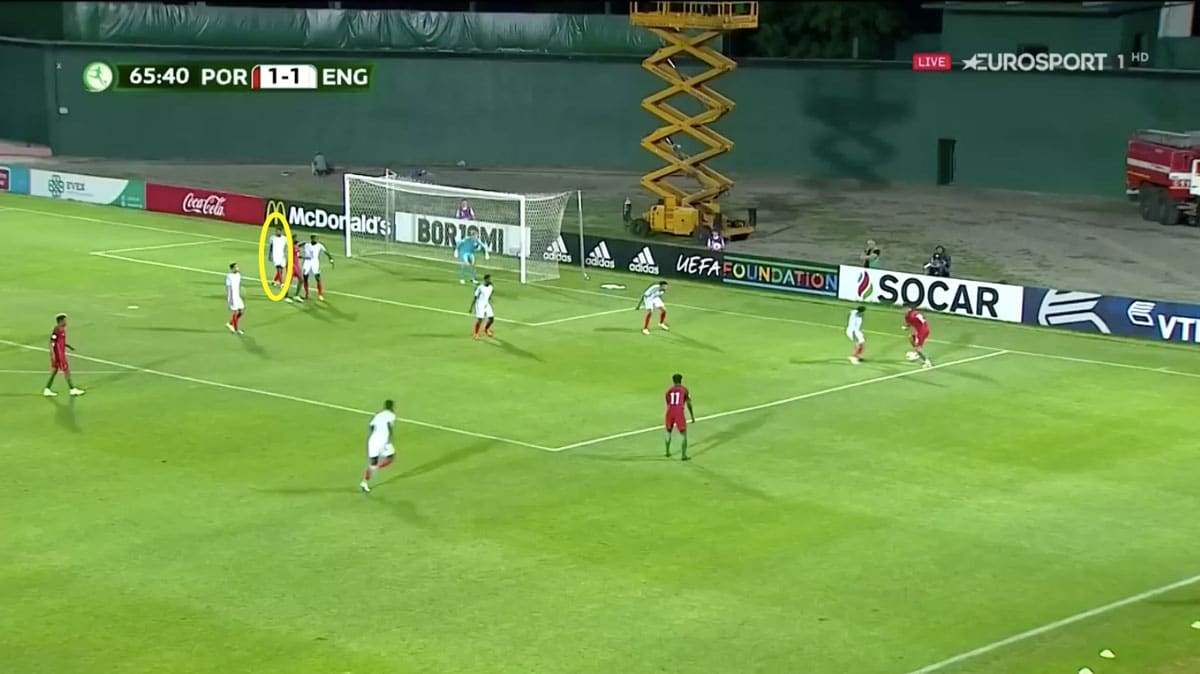 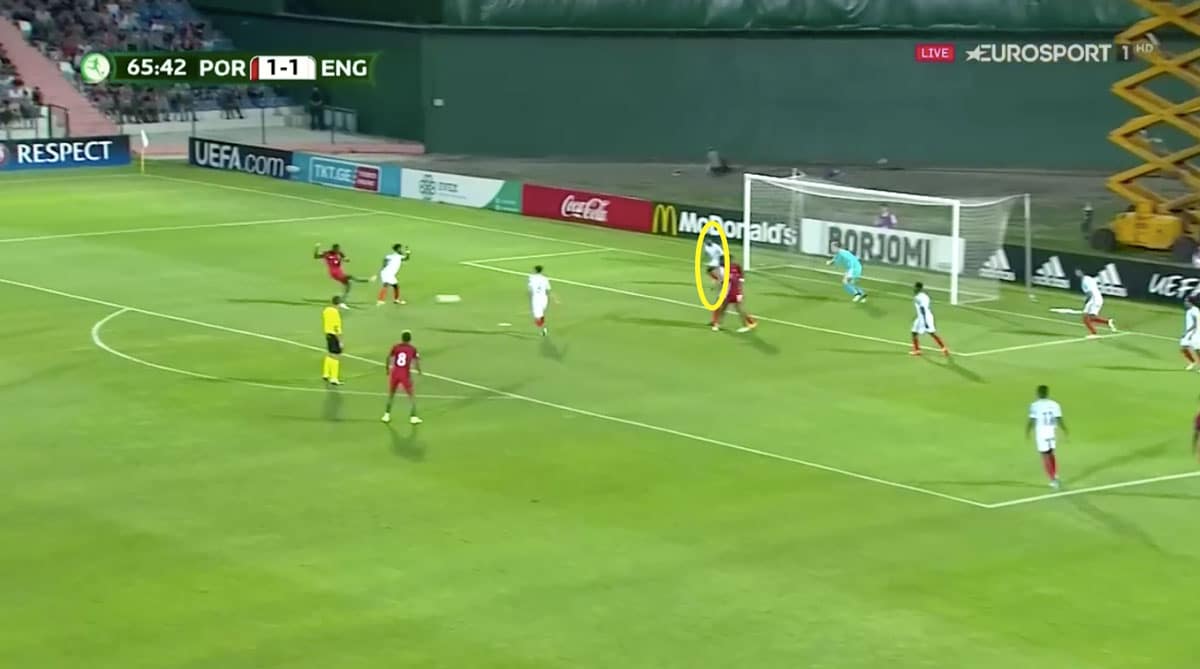 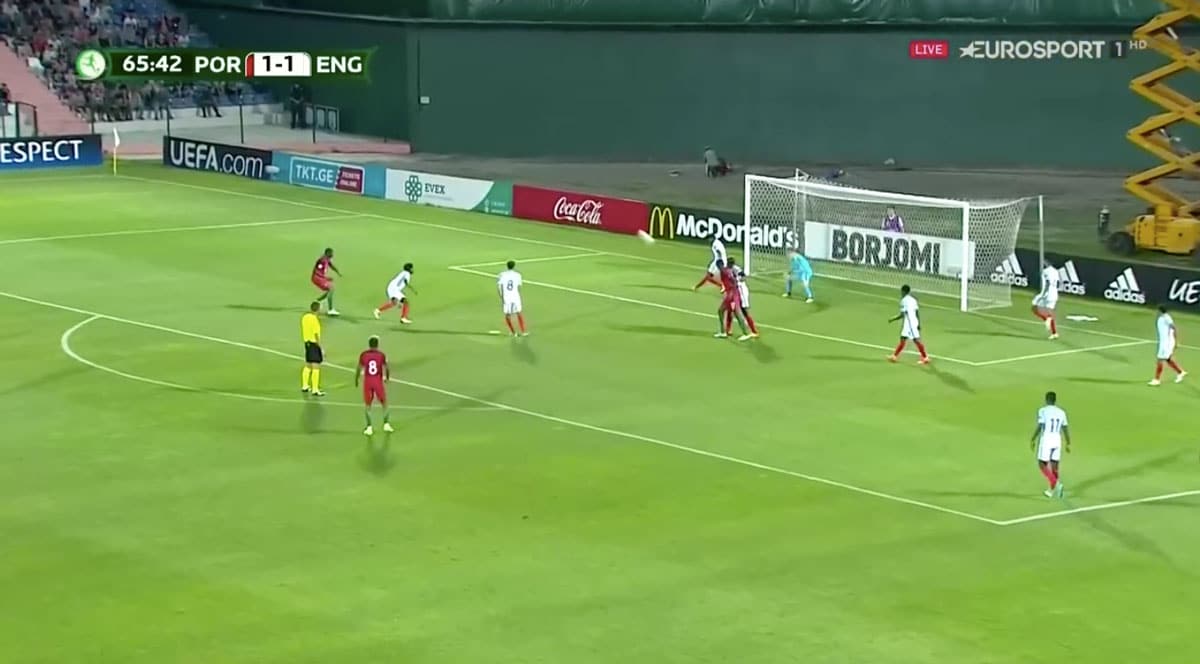 And his intelligence defensively can also be seen above, where (in yellow) he reads the play, and heads back on the line to block the oncoming shot.

What are Sterling’s main weaknesses?

As an attacking full-back, there’s no doubt he’s much stronger going forward than he is defensively.

At senior level too, you would expect him to perhaps struggle with the more physical aspect of the game, especially in the air.

But he is only 18, and there’s no doubt these are both aspects of his game he could work on.

If you look at what Conte did for Moses, turning him into a respected full-back when he’d never played there before, Chelsea will be hopeful something similar can happen with Sterling.

Can Sterling make it at Chelsea?

If you’re looking for a player to make it into the Blues’ first team this season, that man is undoubtedly not Sterling.

As mentioned above, he has three players above him at the moment in Moses, Zappacosta and Azpilicueta. While the Spaniard is also likely to play at centre-back ahead of right wing-back, it still means the teenager’s playing time would be massively limited.

The best he can hope for this season is EFL Cup appearances or perhaps the odd five minutes here or there off the bench if there are a lot of injuries.

His attacking prowess should fit perfectly for the right wing-back role at Stamford Bridge, but at 18, he’s perhaps a few years off that yet.

With the likes of Loftus-Cheek and Abraham thriving away from Chelsea on loan, perhaps that is what the next move for him should be.

If he can prove himself elsewhere in England, it will be hard for the Blues to not involve him in their first-team squad.