Mechelen take on Antwerp in the opening weekend of the new First Division season on Sunday, July 24th. Mechelen are favourites to kick off their campaign with a victory this weekend. Read our free predictions and find the latest odds for the fixture below in our detailed match preview.

Mechelen have won each of their last three encounters with Antwerp ahead of the teams’ clash on Sunday. Read our top predictions for this weekend’s fixture below.

Antwerp finished in fourth position last term, three places and 11 points ahead of Sunday’s opponents Mechelen, though recent encounters between the pair have gone the underdog’s way. Indeed, Mechelen have won each of the last three tussles between the teams and each of the last four skirmishes between the sides at the AFAS-stadion Achter de Kazerne. History is on Mechelen’s side here and bettors are advised to side with them this weekend as a consequence.

Both Mechelen (57) and Antwerp (55) finished the regular season with strong goal-scoring records last term and there is enough firepower in each camp to suggest the net could ripple at both ends on Sunday. At the AFAS-stadion Achter de Kazerne, Mechelen failed to score in just two of their last 13 assignments, while Antwerp managed to find the net in all but one of their 20 domestic fixtures on the road. In addition, BTTS landed in each of the teams’ last two meetings and the same market appeals at the prices on offer here.

Top Betting Odds and Stats for Mechelen vs Antwerp

Makes sure to check out our rundown of the best stats for Sunday’s game below alongside a tool to help you choose the best odds.

Read all of the injury updates and team news for Sunday’s First Division A clash between Mechelen and Antwerp below.

Mechelen largely manoeuvred in the free transfer market during the summer window with no less than five players arriving for nothing. Centre-half Dimitri Lavalee was an interesting capture from Mainz in Germany, as was Boli Bolingoli from Celtic in Scotland. Danny Buijs takes charge of a competitive fixture for the first time on Sunday.

Antwerp made a couple of stellar signings in the summer with the acquisitions of Dutch striker Vincent Janssen and experienced centre-half Toby Alderweireld. Martin Hongla was sold to Verona meanwhile, for £3.33m. Mark van Bommel is the new Head Coach in the dugout for Antwerp this season. 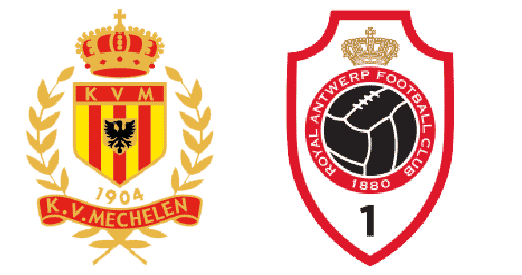 Mechelen beat Antwerp 2-1 when the teams last met in February.

Mechelen vs Antwerp can be watched on Mola TV.