Maybe West Ham United have a thing for Scottish midfielders. Last month they were linked with Fulham’s Tom Cairney and the latest name tipped for a move to the London Stadium is Hibernian’s John McGinn.

According to the Scottish Sun, the Hammers are considering a summer swoop for the 23-year-old with David Moyes having him on his radar since replacing Slaven Bilić in November.

Moyes’ No.2 Billy McKinlay was reportedly sent to Easter Road on a spying mission as McGinn featured in his side’s 2-0 win over Aberdeen.

And with it clear McGinn is on Moyes’ radar – the 54-year-old also watched the midfielder while he was Sunderland boss – we look at who exactly the Hibs man is and what he could offer West Ham.

McGinn broke through at St Mirren before joining Hibs in 2015. The midfielder was brought in to help the club back to the Scottish Premiership, but he has done much more than that since his arrival.

His first campaign saw a 114-year hoodoo end, as the Edinburgh side lifted the Scottish Cup. He was instrumental to that success, appearing in every one of the team’s seven fixtures in the competition.

Last season he helped Hibs to promotion via a comfortable first-place finish in the Scottish Championship. His performances in that division were so impressive he was named the league’s Player of the Year for 2016/17.

Since arriving at Easter Road from St Mirren three years ago for an undisclosed fee, McGinn has scored 15 goals in 122 appearances.

Those goals include two this season in a 2-2 draw at Celtic and one in a 2-1 win at Rangers earlier this month. It’s clear he’s capable of stepping up in big games.

Given his grandfather Jack McGinn is a former Celtic chairman and Scottish FA president, he definitely will have enjoyed that goal against Rangers.

And he feels this season he’s proven he’s capable of playing at the top level in Scotland.

“I’m absolutely a better player now than I was when I last played in the Premiership,” he told the Scottish Sun. “I was very raw – and slightly chubbier – when I was there with St Mirren.

“I do like to think I’m the same in some regards. I like to think I still play without fear. When I broke into the St Mirren team thing went pretty well for me and I managed to hit the ground running.

“There are always challenges that come your way and I’m probably better prepared to deal with them now I’ve been at Hibs. I’m a little older, a little wiser and we’ve had a few setbacks so that all adds to your experience.”

Since he’s been at Easter Road, he’s made it into the Scottish national team too and now has five caps. And with his impressive form attracting the likes of West Ham and Celtic, it would be no surprise to see him add to that total.

What are McGinn’s main strengths?

Perhaps the midfielder is best described by Celtic manager Brendan Rodgers, who is a big fan.

He said last year: “He is very industrious and looks a great lad. He knows the game, you can see that with the way he fills in positions.

“Defensively he’s strong, he puts his foot in and can make a tackle. He doesn’t oversell himself, he’s technically very good when he tackles. Tactically he looks like he’s got a good understanding of the game. He passes it well.”

That passing quality is clear when you watch him, if McGinn has a bit of space to work the ball onto his left foot, he’s capable of picking out a teammate anywhere on the pitch.

In the below stills above Kilmarnock, his technique is clear. He’s given far too much space to pick out his colleague on the touchline. 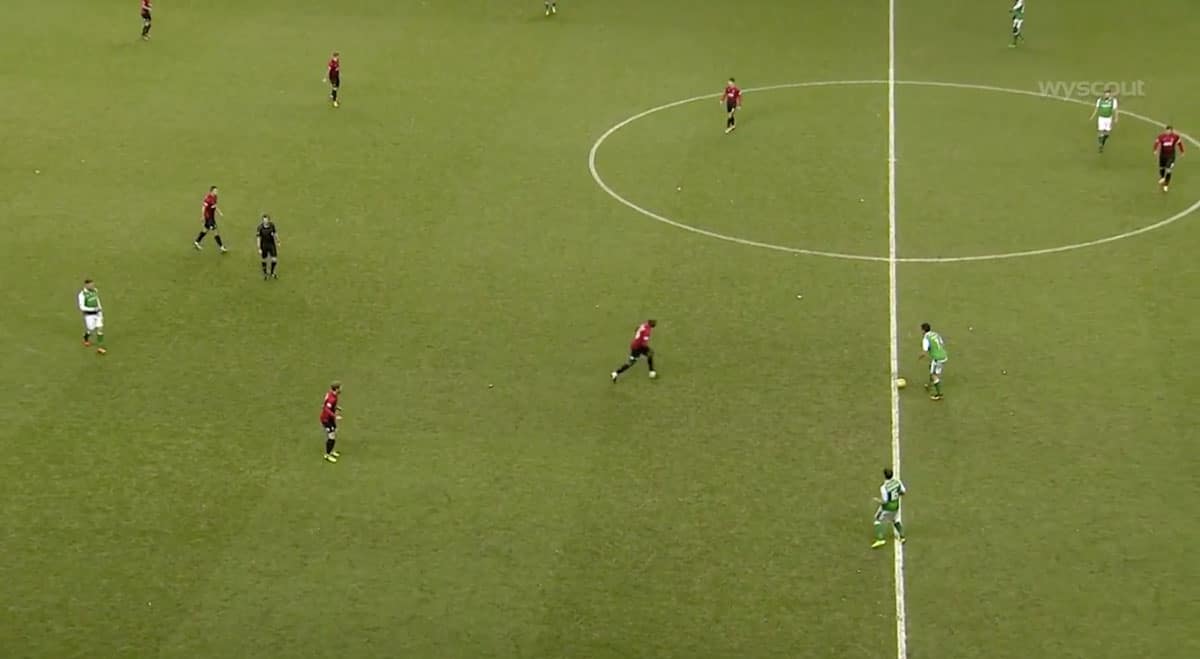 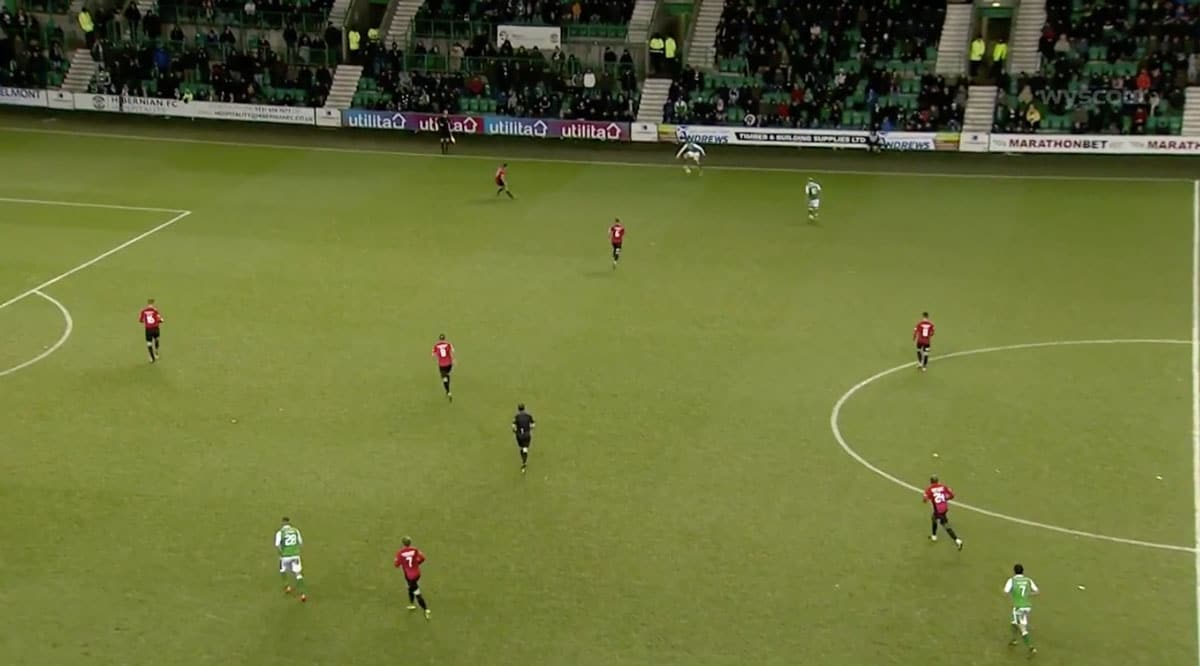 Of course, in the Premier League, he would be unlikely to get quite as much time in possession, but his ability is the same nonetheless.

He’s not just about passing though, he can drive forward to devastating effect as his goal against Rangers showed. 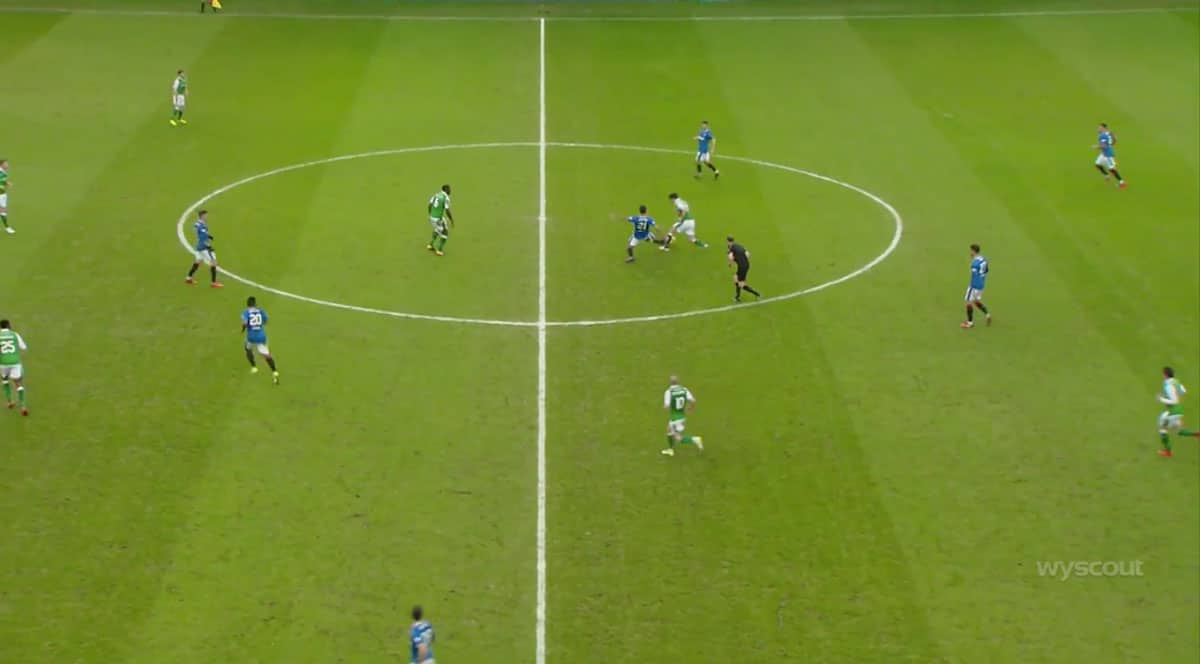 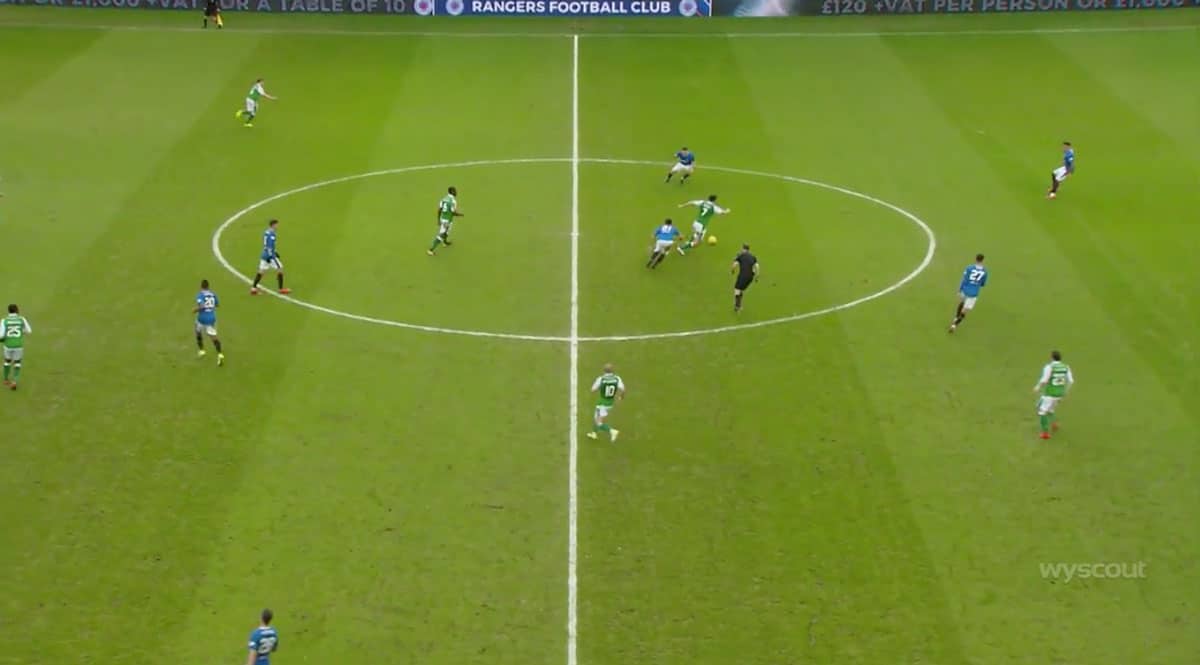 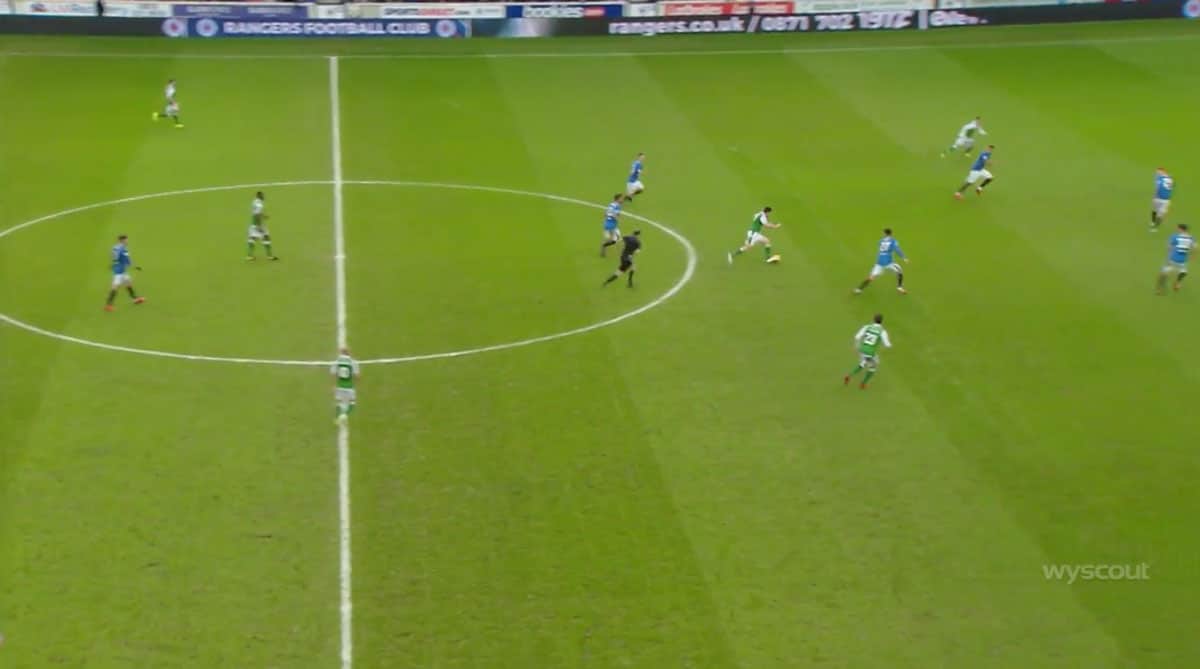 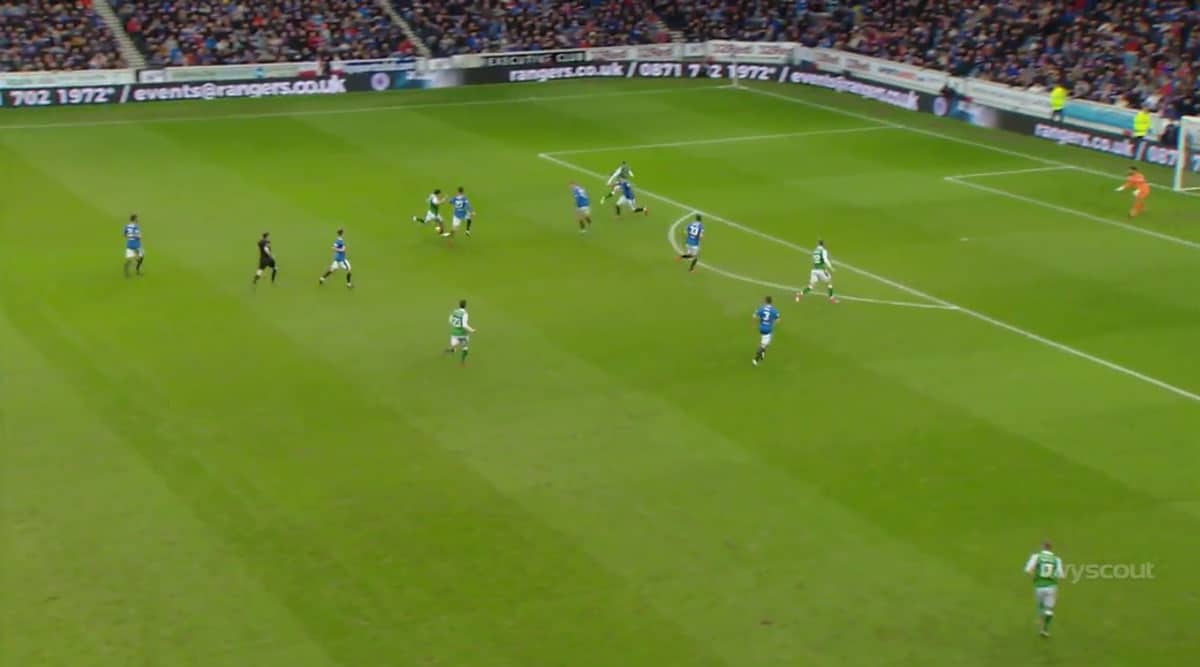 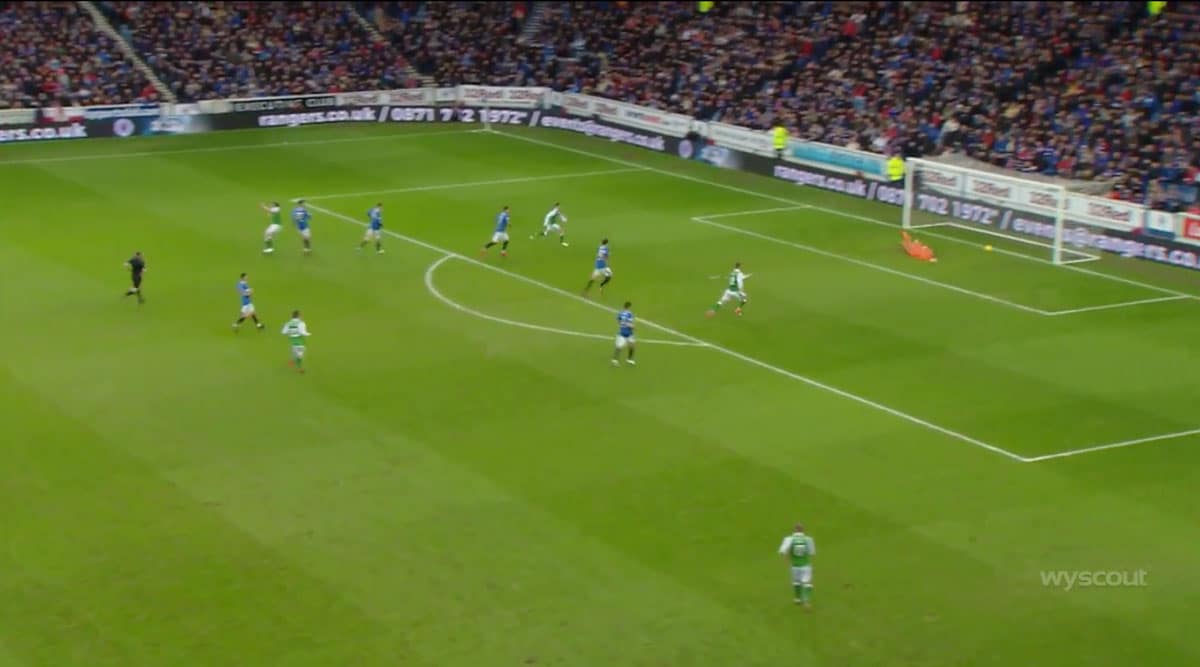 McGinn outmuscles Daniel Candeias in the centre circle and from there, the Gers can’t get near him.

He turns and runs towards the opposition box, with Sean Goss unable to close McGinn down before he works it onto his left foot and fires across Wes Foderingham into the bottom corner.

It was a goal of a player with real quality.

What are McGinn’s main weaknesses?

McGinn is very one-footed. Of course, that doesn’t have to be a weakness, just look at Mousa Dembélé at Tottenham Hotspur, but it can make him very predictable.

McGinn has the ability to score, but he doesn’t seem confident enough to add it to his game regularly, averaging just 0.96 touches in the opposition box per game according to Wyscout.

And there will of course be questions as to whether he can step up to the Premier League. It’s a very different beast to the top flight in Scotland. 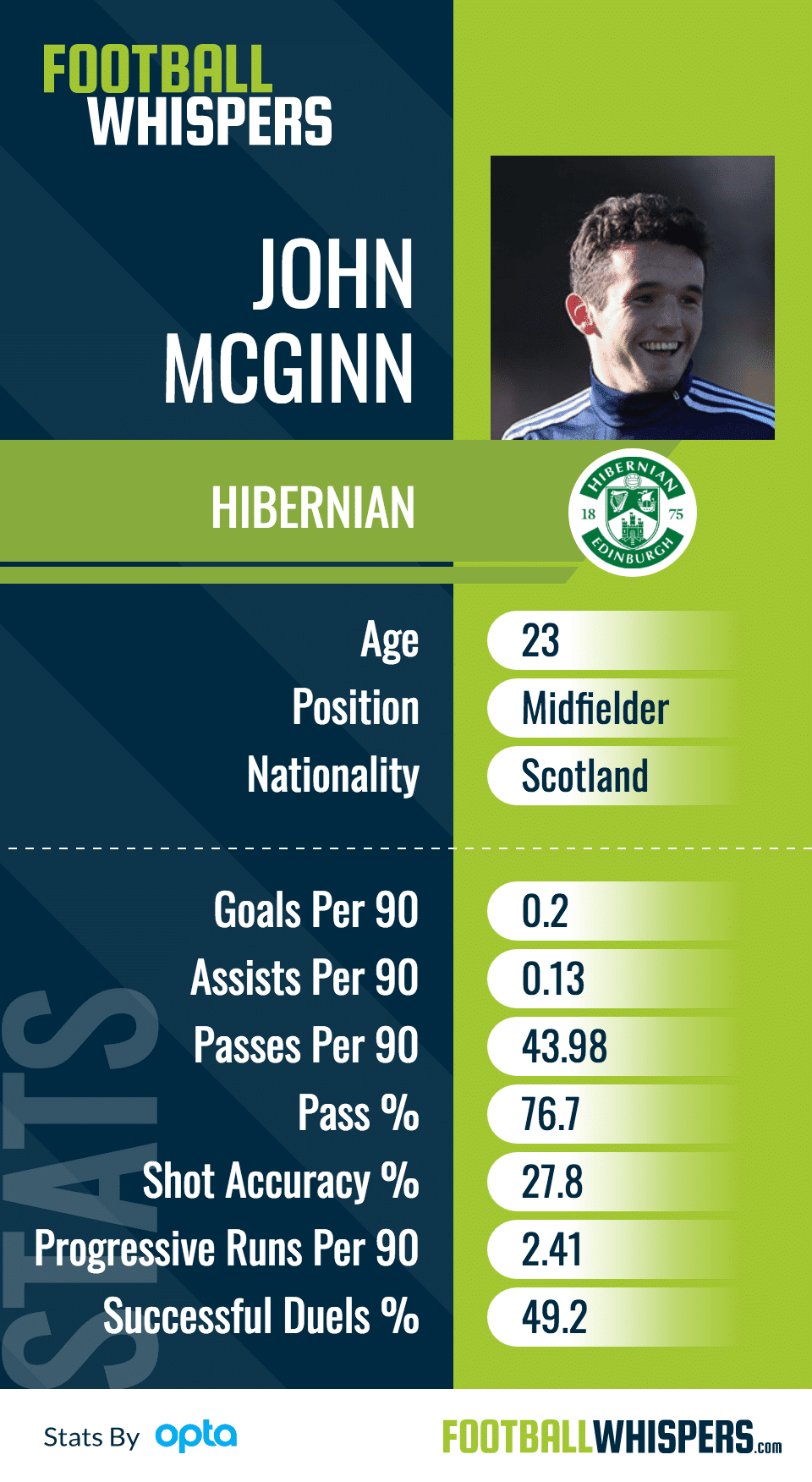 How much is McGinn worth?

The midfielder was a Nottingham Forest transfer target in the summer and the Championship side made a £750,000 bid for him without success.

Hibs boss Neil Lennon thinks his star man is worth much more than that after continued his good form in the Scottish Premiership.

“Everything about his game was what you want from a modern midfield player. I said he was worth £5million a couple of weeks ago – I think he’s worth a lot more than that now,” raved Lennon back in October after his brace against Celtic.

The record sale in Scottish football history is that of Victor Wanyama to Southampton from Celtic for £12.5million in July 2013.

McGinn would probably fall short of that, but a bid of around £7.5million would likely see Hibs bite the Hammers’ hands off.

The inflated prices in English football are yet to properly work their way north of the border, but this summer may be the year when it happens.

It’s clear Moyes wants another midfielder in his squad at West Ham. At 23 McGinn is young and one of the up and coming stars in Scotland at the moment.

He has quality on the ball and isn’t afraid of a tackle either, something that will definitely appeal to the Hammers boss.

Coming from the Scottish Premiership, McGinn is unlikely to cost as much money as someone from a Premier League club or even a Championship side.

At less than £10million, McGinn would be a relatively risk-free signing in today’s market.