If, as expected, Everton the Toffees will have a big hole to fill up front. One they will, reportedly, attempt to solve with the signing of Milan forward M'Baye Niang.

The 22-year-old Frenchman is a precocious talent and spent the second half of the season on loan at Watford who had the option to make his move permanent at a cost of £13.5million.

However, Niang text the Hornets' owner, Gino Pozzo, to say he did not want to join the club full time this summer. He will return to parent club Milan and the Hornets will not be too concerned about missing out on the winger-cum-forward.

That should act as Everton's first warning about Niang. There is, unquestionably, a player in there. When he scored his first Watford goal, a header on his home debut in the 2-1 win over Burnley in February, hopes were high that the Hornets had signed a classy player.

However, it was not until the 2-0 victory over West Bromwich Albion in April that Niang registered again. His goal was beautifully taken, though, cutting in from the left-hand side and bending beyond Ben Foster into the far corner.

Niang then supplied the assist for his side's second, picking out the run of Troy Deeney with a perfectly-weighted ball over the top. Those two moments encapsulated the quality the former Caen youngster undoubtedly possesses.

The problem is that talent is seen all to infrequently. There is a reason Niang was allowed to leave a club the size of Milan to join Watford, in just their second season in the Premier League.

When he was at Caen there were big hopes for a player who was promoted to the first team as a 16-year-old and became the club's youngest ever player.

Coach Philippe Tranchant said at the time: “We’ve never seen a player like him at the club before.”

Standing 6ft tall as a teenager and blessed with searing pace it was easy to see why. Niang scored three times in four starts during the 2010/11 season and was snapped up by Milan in December 13 amid interest from Arsenal, Tottenham Hotspur and Everton.

The Rossoneri hoped they had signed the next big thing out of France. Scoring aged 17 and 350 days he became the second-youngest scorer in the club's history.

Despite his quality Niang has failed to deliver with regularity and has just eight league goals in the last three seasons.

By his own admission he needed a change when he arrived at Watford: “I have real opportunities ahead of me. If I do everything I can, I’m convinced I’ll improve and succeed.

“It wasn’t that my relationship with Milan broke down, but maybe I did need a change. My career needed it. We both recognised that.”

Off the field things have not always gone to plan. Niang was suspended by France's Under-21s for a year in 2013 after breaking a curfew to visit a nightclub while on international duty.

He has had problems in Italy too. When pulled over by police for driving without a licence he pretended to be team-mate Bakaye Traoré. In 2014 he crashed his Ferrari into a tree and was given a suspended 18-month prison sentence for an alleged hit-and-run incident which injured 11 others.

As if that wasn't enough, he damaged his ankle and shoulder after sliding another car off the road in 2016 while out with friends in Legano.

And when it came to celebrating Milan's Supercopa Italiana victory over Juventus he did so by sharing a video of himself jumping off a balcony into a swimming pool.

Either misfortune has followed Niang or he has made some questionable decisions along the way. “When we’re young, we all have problems,” he said this year.

“Certainly, go back two or three years, and I was still making mistakes. Silly mistakes. Mistakes which hurt me. Now I’d like to think I am a bit more mature, a bit wiser, and I understand more about life and the way things work. These days, I can fall back on my experiences to help me. I can learn from those mistakes.”

Where would he fit in at Everton?

Everton are bracing themselves to lose Lukaku. The Belgian hitman, who has scored 68 Premier League goals in the last four seasons, is a wanted man and after deciding against signing a new contract that was on the table. It is extremely unlikely he will remain at Goodison Park.

In those four seasons Everton have built everything around serving the needs of the big Belgian, getting the ball to him as often as possible. Niang, though, is not a line leader in the same mould. 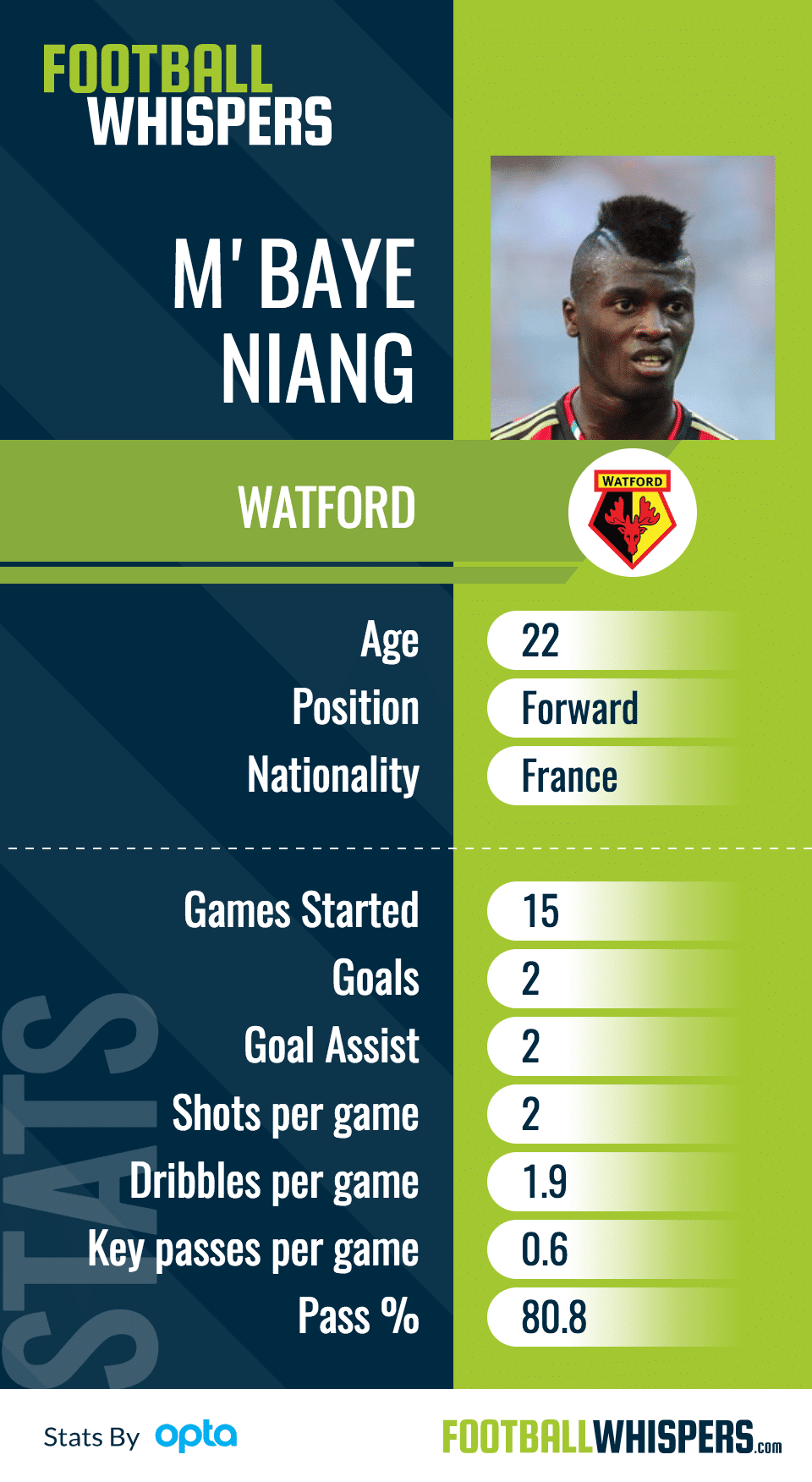 Although he is tall, he is slight and does not possess the frame for the hustle and bustle of Premier League football. That is why he has played out wide for Watford this season.

He has not been helped by Walter Mazzarri's formation roulette at Vicarage Road; lining up on the right and left on alternate weeks under the Italian. However, cutting in from the left is when he has looked most dangerous.

Last season Everton largely utilised a 4-2-3-1 system under Roberto Martinez. However, Koeman has switched to a back three with wing-backs for much of this campaign. There would be no natural role for Niang in that system, though he could play behind the main striker where Ross Barkley currently plays.

The Tottenham Hotspur transfer target has, reportedly, missed Koeman's Monday deadline to inform the club whether he will sign a new contract or not meaning it is increasingly likely there will be a vacancy in that role. However, the arrival of Ajax captain Davy Klaassen could mean that potential vacancy has already been filled.

Without re-shaping his entire side Koeman would struggle to fit Niang into the side as things stand.