Maxwel Cornet scored twice against Manchester City on Tuesday night but he might have had more. Every time Lyon attacked, it seemed he was at the centre of it.

On one occasion he was denied by a superb Aymeric Laporte block. On another his downward volley bounced up and onto the bar.

When he did find the net, it was with style. His first goal was expertly finished, a well-placed shot into the top corner after he had cut inside onto his left foot. And his second goal was equally well taken, slotting past the onrushing Ederson having been played in behind the City defence.

“I was very impressed by the talent of Cornet,” said Pep Guardiola after the 2-2 draw. He was not the only one. Against a City defence that has barely let in a goal domestically this season, Cornet was a constant threat.

It is not the first time Cornet has caused problems for the Premier League champions, either. He scored in the reverse fixture, a 2-1 win at the Etihad, and is now being linked with a future move to the club.

The reasons why are clear. Cornet, playing primarily on the right of Lyon’s front three, has demonstrated a keen eye for goal. He is quick and skilful, and able to position himself intelligently in the final third.

In the Champions League this season, Cornet has averaged 3.36 total scoring attempts per 90 minutes and 5.77 touches in the opposition box per game. He has made 2.4 successful take-ons per 90 and has a shot accuracy of 57.1 per cent. These stats suggest he is regularly involved in Lyon’s attacking play.

Cornet has been at Lyon for four years now, since joining from Metz in 2014. He has been a regular in the first team for the last three seasons and has twice reached double figures in goals in all competitions.

This season, though, he has lacked game time. It is odd, given his performances against Manchester City, that he is yet to start a game in Ligue 1, making just eight appearances from the bench. Lyon boss Bruno Génésio is clearly not entirely convinced by the Ivorian international. 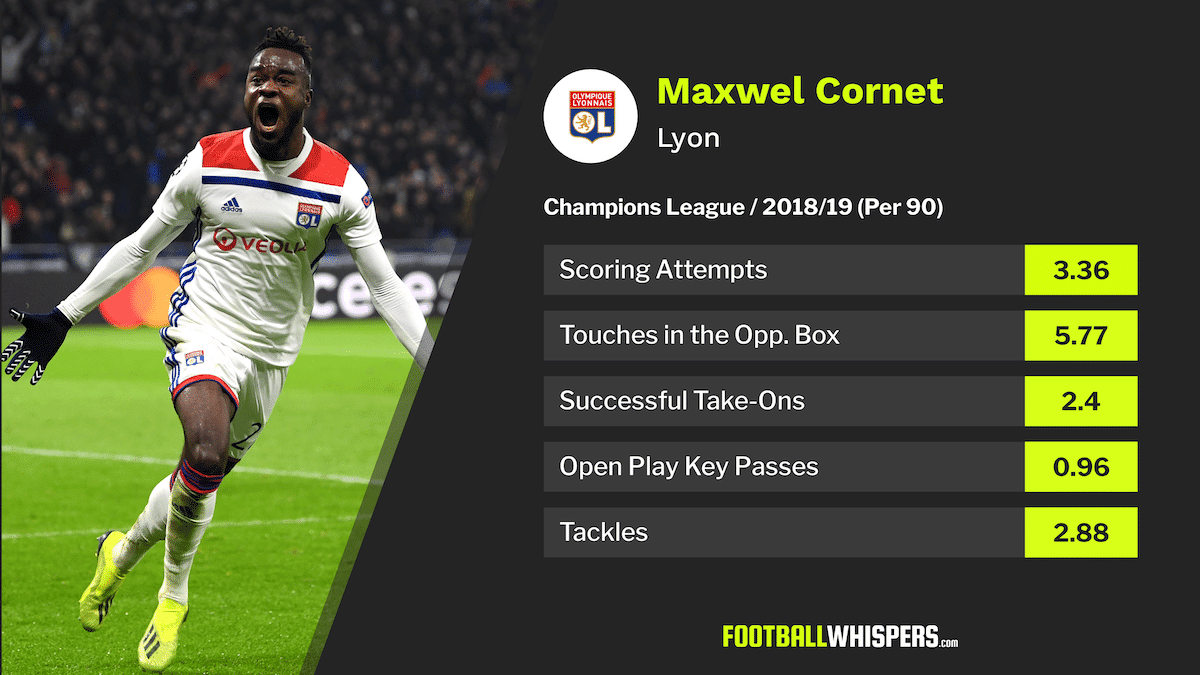 “It's only when I'm on the field that I'm having fun. Having more game time is what I miss this season,” Cornet said in an interview with Maxifoot last month.

“I'm not going to hide that I had offers and I had a desire to leave. The club made me understand that they were counting on me. But as I said, the most important thing is the playing time. And today, I clearly think I'm short of playing time.”

He has shown what he can do on the biggest stage. He is young, having just turned 22, and there are elements of his game which can still be improved. But it is important that his potential is not wasted on the bench.

Cornet’s future, and where he plays his football in the next few years, could depend on whether or not he can force his way into Génésio’s starting XI more often during the remainder of the season.