Modern strikers are marked out increasingly by supreme athleticism, subtlety of touch and the ability to affect the game in all phases and in most areas of the attacking half. In this regard, Maxi Gómez, Celta Vigo‘s Uruguayan star, belongs to a different era.

Standing 6ft 1ins, with broad shoulders and a head chiselled from granite, Gómez is a no-frills centre-forward. He is not fast, he is not especially skilful and he rarely, if ever, threatens goal from more than 20 yards out.

What Gómez is, though, is a battering ram of a goalscorer, with crossed balls magnetically attracted to his substantial cranium; he is a brute of a hold-up merchant, shielding the ball expertly and linking with midfield runners intelligently and dependably; he is lethal when in sight of goal.

Above all else, Gómez is incredibly effective.

Who is Maxi Gómez?

Now in his second season in La Liga, Gómez, 22, joined Celta from Defensor Sporting in May of 2017.

Despite having only two seasons' worth of top-flight experience in his homeland – where he averaged better than a goal every other game – his assimilation to his new surroundings and the step up in quality was instant, netting a brace against Real Sociedad on his debut.

Consistent figuring towards the top end of the scoring charts in Spain, Chinese Super League side Beijing Guoan offered €20million for the striker in January – a relatively modest sum but a quick and significant return on the €4million Celta paid Defender for the striker – only for the interested club to get cold feet and pull out of the move.

While a switch to China would have been lucrative for the player, few would dispute that remaining in Spain has been best for his career.

Gómez finished the season with 17 La Liga strikes to his name, with Atlético Madrid's Antoine Griezmann the only player aged under 30 able to outscore the Celta star.

And Gómez has begun 2018/19 in equally impressive fashion. Although Celta have largely flattered to deceive, with just two wins from their opening eight fixtures, the Uruguayan has been directly involved in a goal a game on average, with four goals and four assists.

Having proven he can score prolifically in one of Europe's major leagues, the international stage is next to be conquered for Gómez. He is yet to bag in his nine senior caps to date but, with compatriots Luis Suárez and Edinson Cavani now in their 30s, his time will come.

The most obvious strength Gómez possesses is his incredible heading ability. Although a well-built, powerful centre-forward, the 22-year-old has the useful knack of being able to hang in the air when contesting crosses.

So prodigious is the young attacker with his head, indeed, that ten of his 21 La Liga goals to date have been headers.

His hold-up play is also a real asset for Celta, with the Balaídos side able to seek the young striker in high areas and have confidence that he can hold off and evade opponents until support arrives.

Gómez's ability to link with on-rushing team-mates is improving rapidly, too, as evidenced by his four assists.

Rather than weaknesses, per say, there are certain limitations to Gómez's game.

Firstly, he is not blessed with any real turn of pace, and therefore is unlikely to burst away from opposition defenders or race on to through-balls.

He is also, in addition to his head, reliant on his right foot, having yet to score a single La Liga goal from his weaker left side. 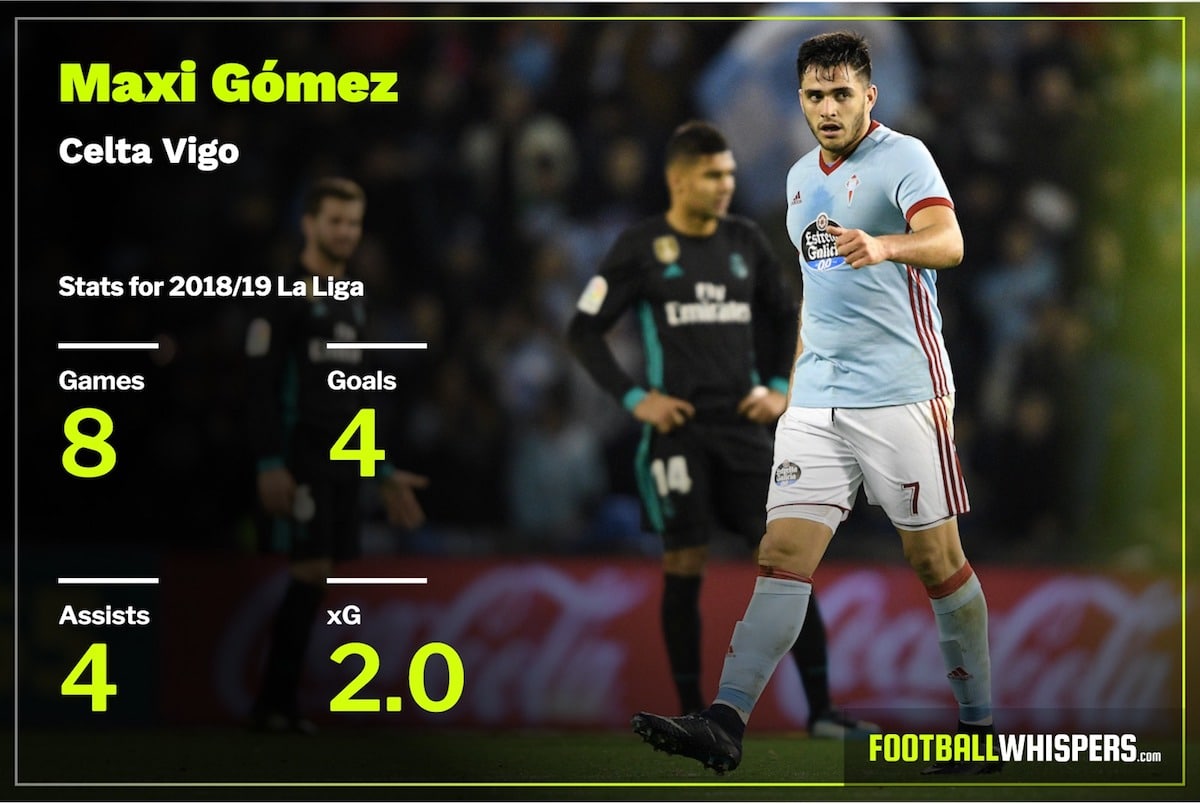 Although Beijing Guoan came close to signing Gómez for the bargain price of just €20million, the continued fine scoring form of the Uruguayan means the Galician side are highly unlikely to again consider such a low offer any time soon.

In fact, given the relative paucity of high-potential young strikers with proven pedigree in Europe at present, any interested party might have to stump up the full €50million buyout figure stipulated in his contract in order to prise Gómez away from Celta.

What is his most-likely destination?

West Ham United are among the sides interested in a move for Gómez, with varying reports claiming the Hammers are ready to offer anything from £27million to £44million for the La Liga hotshot.

Gómez's physical style would be well-suited to the English game and, as a powerful presence at the point of attack, it is not difficult to imagine the youngster seamlessly slotting not the Hammers frontline.

However, Borussia Dortmund were also linked with Gómez over the summer. If BVB are unable to secure a permanent deal for on-loan Barcelona striker Paco Alcácer, West Ham could have serious competition from the German league leaders.