While their main focus appears to be on re-signing Chelsea have reportedly made Mauro Icardi another of their summer transfer targets.

A potential move for the Everton striker could end up costing the London club Paul Pogba-esque money, with talk of a world record fee being needed in order for the 23-year-old to leave Goodison Park.

It's why Antonio Conte may prefer to do his summer shopping back in his native Italy.

But Inter striker Icardi is unlikely to come cheap, particularly as the Milanese giants discovered they will continue to be hindered by UEFA’s Financial Fair Play regulations into next season and beyond.

A report from the governing body stated the Italian club “only partially fulfilled the targets set” after failing to comply with financial fair play rules over recent years.

It prompted UEFA to confirm the squad and transfer restrictions that are currently placed on Inter will continue to apply next season. 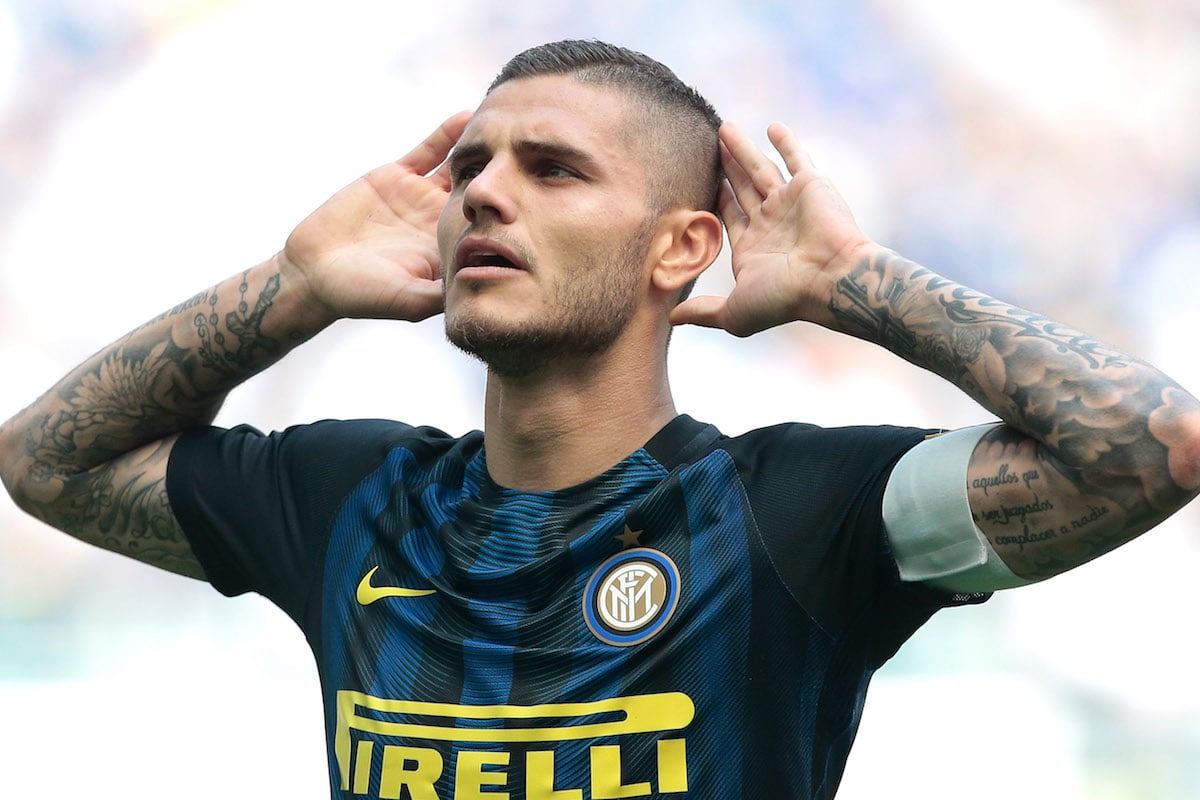 It is therefore not difficult to understand why Inter will look to turn a major profit once the current campaign comes to an end.

And aside from the likes of Ivan Perisic and Marcelo Brozovic, there is little doubt Icardi remains the club's biggest asset.

Still only 24, the Argentine has fully vindicated in his decision to leave Barcelona back in January 2011.

The Argentinian joined the Catalan's youth sector ahead of the 2008/09 campaign and slowly made his way through the ranks at La Masia.

However, as Pep Guardiola fully committed to making tiki-taka the overriding culture at the club, it quickly became apparent that there would be no place for an out-and-out goalscorer.

If there was no space for Zlatan Ibrahimovic, what chance did an unproven teenager have of breaking into the side?

“I have no regrets about leaving Barcelona,” Icardi said in a recent interview. “If a youngster wants to grow then certain decisions have to be made.

“At the time I spoke about it with my father, and we decided to move to Italy.”

Sampdoria – at the time a Serie B club – was his next destination and their new €400,000 signing grabbed 13 goals in 19 games for their Primavera (under-19) side and made his first-team debut.

From there Icardi's story is well-known. He became friends with fellow striker Maxi Lopez, moved to Inter, married his former team-mate’s wife, became embroiled in a very bitter and very public spat, was named the Nerazzurri captain and then repeatedly argued with the club’s supporters.

Having arrived for a €11.7 million fee, one that now looks like a complete steal, Icardi took time to settle into life at a big club and scored only nine times in his debut campaign.

Since then, however, he has hit the back of the net 59 times in 99 league appearances. He shared Serie A's top scorer honours with Luca Toni in 2014/15 and he has already struck 21 times in 30 games this term.

If Chelsea want a man to finish their excellent approach play, they could do much worse than looking to sign him as a replacement for Diego Costa, who continues to be linked with a move away to China.

The Inter skipper has averaged just 3.3 shots per game this term, hitting the target with 49% of those efforts. He regularly makes opposing goalkeepers utterly irrelevant with his clinical finishing.

An old school poacher, Icardi's prowess in the box is undeniable. Only one of his tally this season – and five of his entire Inter haul – has come from outside the penalty area. He does whatever it takes to get the ball into the back of the net.

In 2016/17, Icardi has bagged six headers, scored three times with his left foot and finished the other 12 with his right.

However, this season has seen the Rosario native vastly improve his contributions elsewhere.

Icardi's first three years with Inter saw him register a total of twelve assists in 91 games.

This term he has eight in 30 matches and it's not just due to improved finishing from those on the receiving end of his passes.

With eight rounds left to play, he has created more scoring chances for his team-mates (39) than he managed in the whole of last season (32).

Icardi also looks much more confident in his dribbling than in years past, completing 65% of the take-ons he has attempted in 2016/17 compared to just 53% twelve months ago. 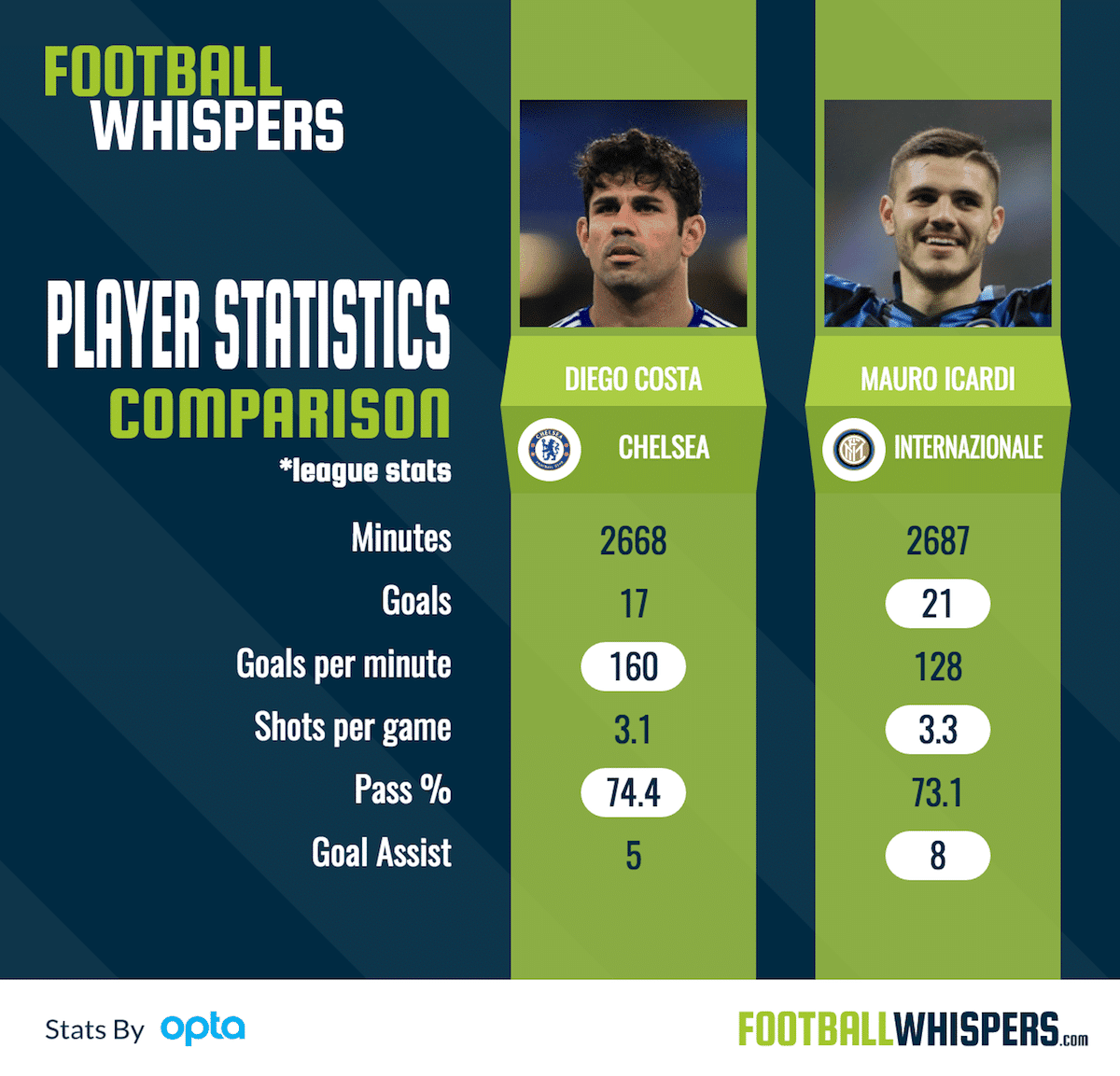 “When watching Inter this season, I was really impressed by Icardi tracking back against Chievo to win the ball,” Juventus defender Giorgio Chiellini said of the striker back in February.

It is not difficult to imagine Conte’s ears pricking up at the sound of a striker being praised for his effort in sacrificing to help his team defend.

Former Nerazzurri star Diego Milito, meanwhile, admired his compatriot had “worked to improve his overall impact” on the team’s play.

They may be vastly different in their approach to the game – and nobody would get the two men or their playing styles confused – but if Chelsea are looking to replace Costa they could do far worse than securing Icardi.

After all, they’d merely be replacing one divisive and controversial South American-born striker who has spent time in Spain with another…