There is a striking moment in Make Us Dream, the fascinating feature-length documentary which charts the life and times of Steven Gerrard.

There is, of course, a hagiographical sheen to the portrait but the candour with which Gerrard's agent Struan Marshall spoke was refreshing.

In the summer of 2005, Marshall attracted opprobrium from Liverpool fans, who despised the Scot for trying to engineer Gerrard's move to Chelsea. At one point, it looked as though Gerrard had been seduced by the Blues, who were newly-crowned Premier League champions under football management's hottest thing, José Mourinho.

Marshall was subsequently left red-faced by the Liverpool captain's volte-face, Gerrard rejected Chelsea's overtures to sign a new deal at Anfield. Gerrard jumped to Marshall's defence and, in the documentary, the agent's rationale behind the saga is sound.

The gist; Marshall wasn't a Liverpool fan. Gerrard was not his hero, but his client. His job was to ensure the best possible future for the player. A full England international who had just captained Liverpool to Champions League glory, Gerrard was obviously hot property and Chelsea, who were buying everyone at that stage, were obviously an attractive option.

In the end, Gerrard's unbending loyalty to the Reds shone through but it's a saga which bears some similarities to Mauro Icardi's current predicament at Inter.

Let's recap on recent events involving the Argentine at the San Siro. The 2017/18 season was Icardi's most prolific since joining the club in 2013, scoring 29 goals in 34 Serie A appearances.

Naturally, he was in line for a new contract. However, talks have been protracted and seemingly haven't been helped by Wanda Nara, Icardi's wife and agent. They say don't mix love and business but Icardi certainly abandoned that mantra when he started an illicit affair with the Argentine media personality while she was married to his Sampdoria teammate Maxi López.

Six years later, Wanda remains a divisive figure. Last week, she said: “I would like Mauro to be more protected by the club because sometimes some bad things come from inside.”

We're not sure what the last six words mean but Inter clearly weren't overly pleased with her comments. They stripped Icardi of the captaincy with a brutally brief tweet which failed to mention the 25-year-old.

The Club can confirm that Samir #Handanovic is the new Inter captain.#FCIM

Incensed and presumably humiliated, Icardi refused to travel with the squad for the Nerazzurri's Europa League clash with Rapid Vienna in Austria.

Inter head coach Luciano Spalletti, as black-and-white as ever, said the striker didn't want to participate in the game.

“The decision to remove the captaincy from Icardi was difficult and painful, absolutely shared by all the club members and taken for the good of Inter,” said Spalletti.

“He was called up for Vienna but he did not want to be there. Things around him have disturbed him and the team he captained.”

The episode has plunged Icardi's future at the club into darkness. While he was not born and bred in Milan, he was Inter's leader and talisman, like Gerrard. Of course, like Marshall, Wanda Nara is not an Inter supporter; she is an Icardi supporter.

She is not rushing into contract negotiations because she is considering whether staying at Inter is the best move. Icardi has scored 122 goals in nearly six years with the club but even his deadly marksmanship has failed to land trophies.

Icardi has been recognised for his individual achievements – 2018's Serie A Footballer of the Year, two Capocannonieres and two Serie A Team of the Year appearances – but he is, like Gerrard, driven by league titles. Whereas Liverpool's hero watched in agony as Manchester United, Arsenal and later Chelsea and Manchester City, took their place on the English throne, Icardi's efforts have done little to loosen Juventus' vice-like grip on Serie A supremacy.

The Bianconeri have won the Scudetto in each of Icardi's five seasons at Inter and are on course to make it six. Inter's finishes during that time are as follows: 5th, 8th, 4th, 7th, 4th.

This season they're on course to finish third, which would be their highest since 2011. While, on the surface, that would signal slight progression, Inter are currently still nine points adrift of second-placed Napoli and a whopping 20 behind Juventus. They also failed to progress beyond the group stage in this season's Champions League.

With uncertainty over Spalletti's future, Icardi must be pondering his own. After all, considering he joined Barcelona's fabled La Masia academy in 2008, just as the club entered a new era under Pep Guardiola, he probably envisioned more major honours in his career. 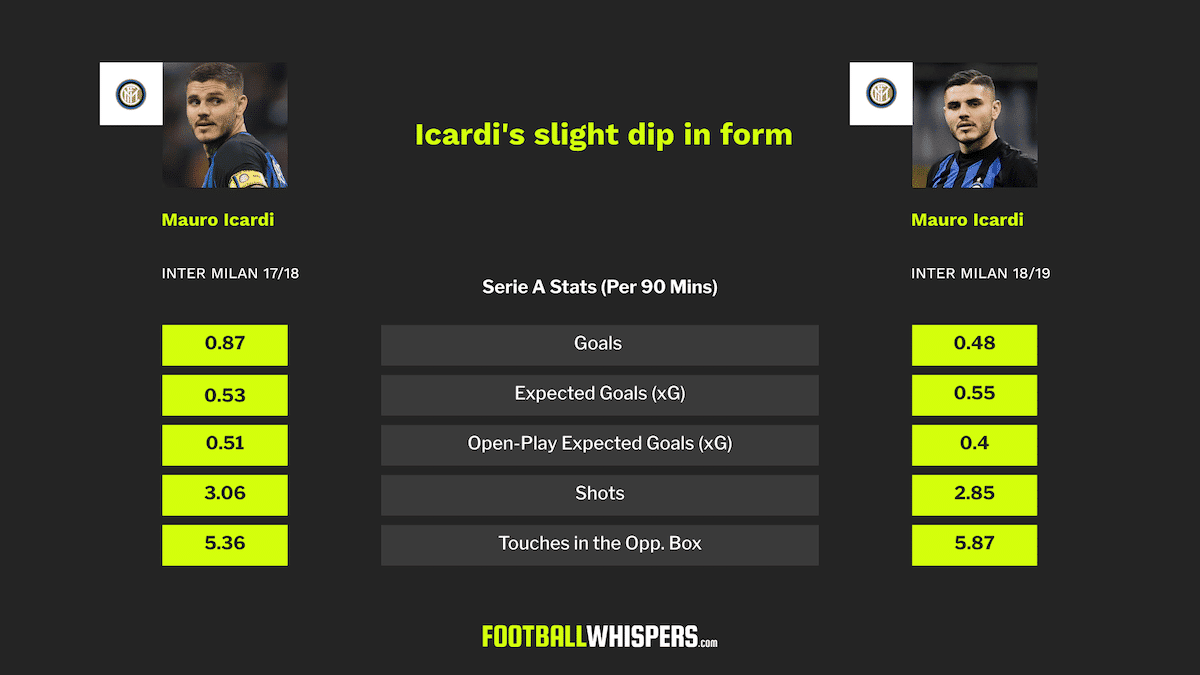 Whereas Liverpool fans struggled with an idea as unfathomable as Gerrard leaving for Chelsea, Icardi's fractious relationship with Inter's fanbase makes his situation all the more fascinating.

As has been well-documented, Icardi enraged the club's fans when his autobiography Sempre Avanti – meaning ‘Always Ahead' – detailed an incident in which he had an angry confrontation with an Ultra after a defeat away to Sassuolo in February 2015.

The Curva Nord's fierce rebuttal came by way of unfurling a banner which read: “Icardi: you’re the b*****d, making s**t up to sell more copies. You heinous mercenary.” Another read: “You use a child to justify yourself and throw mud in our faces. You’re not a man, you’re not a captain, you’re just a cowardly piece of s**t.”

On that occasion, Inter decided not to take the armband away so this latest fallout seems significant.

Since Icardi's book fiasco, he has established himself as one of Europe's most coveted frontmen. Chelsea, Real Madrid and even Juventus – according to reports in Italy – are noted admirers, even if off-pitch disturbances have caused a dip in form. This season, he is averaging a goal in open play every 277 minutes in Serie A, compared to 128 in 2017/18.

There may yet be a resolution, an olive branch and a path back into first-team action. This, however, is unquestionably the nadir in an already incendiary relationship with the club.

Gerrard stuck with Liverpool but it may be best for all parties if Icardi moved on.