As Jose Mourinho rested several of his first-team stars before the UEFA Europa League final against Ajax, a number of players from the club's academy were given a chance to shine.

Although he didn’t take the pitch, 20-year-old Matty Willock was handed a place on the bench against West Bromwich Albion and Crystal Palace and now the midfielder could be set for a loan spell at Rangers.

Graduating from the Under-18s, the former Arsenal youth player did enough to impress United staff and became a key part of Wayne Joyce’s Under-21 side that finished sixth in the Premier League 2.

He started 21 times, scoring twice, and showed an all-round ability that caught the eye of the Portuguese boss.

ESPN reported on Sunday that Rangers were interested in Willock and The Sun followed that up on Monday by suggesting Pedro Caixinha is keen on landing the midfielder on loan.

It’s a move that makes sense for the Glasgow club. An embarrassing loss to Luxembourg outfit Progrès Niederkorn led former captain, Barry Ferguson, to question the ability of the Gers midfield.

“There were times when you could have thrown a blanket over Ryan Jack, Jordan Rossiter and Niko Kranjcar and covered the three of them, they were that close together,” he told the Daily Record.

“When you see the way Progrès played, I don’t think there was any need to have two holding midfielders. Jack has played that role practically his entire career at Aberdeen so he could have sat in there with two others deployed further forward.

“And what struck me was the lack of runners from midfield, there was nobody going beyond the strikers.”

What would Willock add to Rangers midfield?

Although he has been known to play a little further forward during the early days of his career, Willock has established himself as an all-action midfielder, someone who can play the box-to-box role perfectly. He can defend and battle but also has the finesse of classic No.10 playmaker.

From the grabs below, you can see the intelligence the youngster possesses.

Picking the ball up deep, he is surrounded by two Southampton players, but he stays calm, holds on to the ball and refuses to take the easy option.

Once the defenders retreat, Willock already has the nous to pick out a positive run down the right-flank. 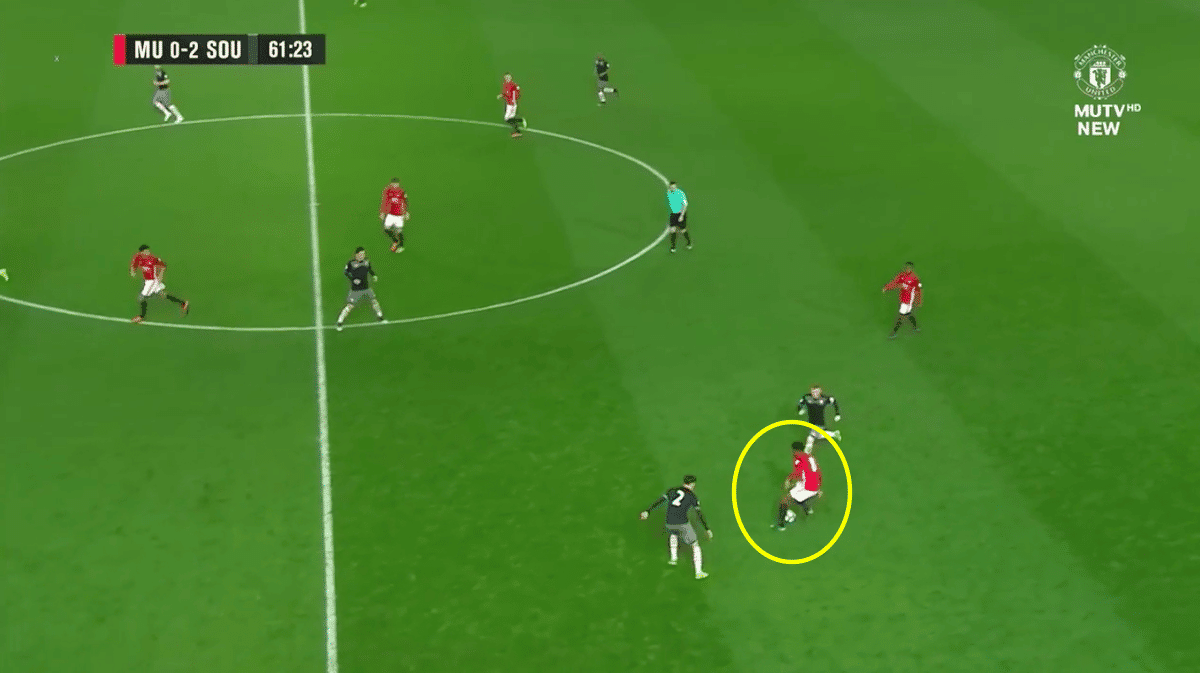 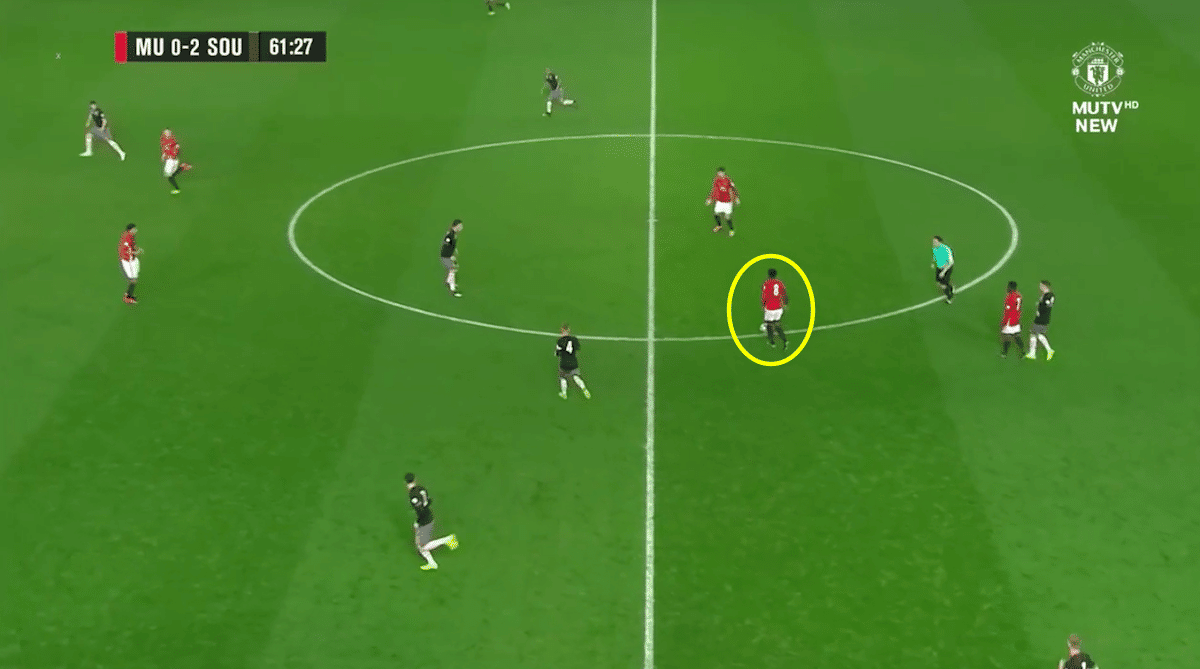 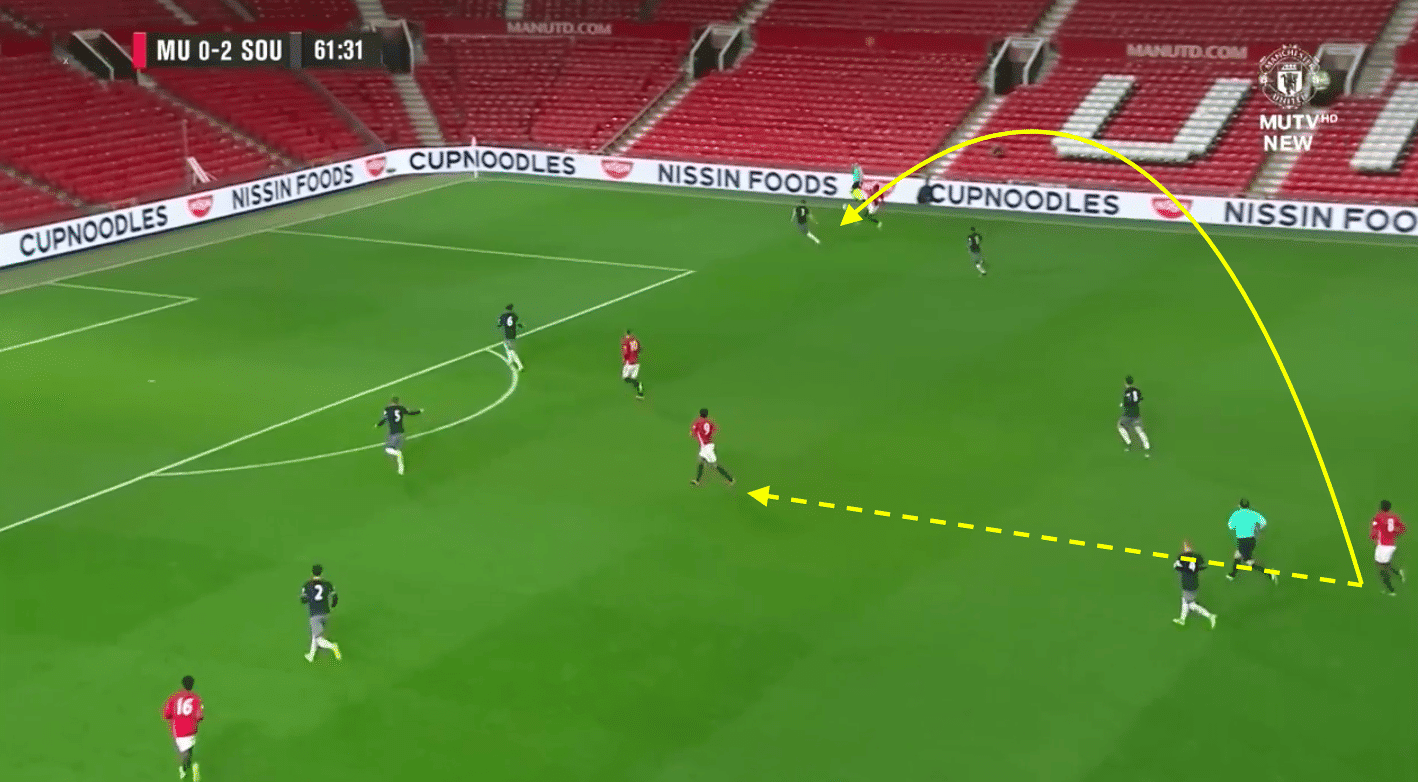 The ball is inch perfect and rather than rest on his laurels, he follows up the play, shadowing the run of the No.9 and ends up not far away from receiving a pass on the edge of the box.

That ability to start, develop and join the attack would be a welcome addition to Pedro Caixinha’s midfield trio. If you have too many players doing the same job, or unable to break the lines, your play can become limited and predictable. Willock has the attributes to make something happen.

Willock possesses a turn of pace and has the physical capabilities which make beating players look a lot easier than it is. He’s tall, lanky but with a strong upper-body.

Calm in possession, he doesn’t loss his head and looks for the opportune moment to pick a pass.

Something that is key with the development of young players these days is his excellent footwork. He is great with the ball in tight areas and can play off both feet.

Although he will still develop physically, Willock demonstrates great balance and poise, both in and out of possession.

Man for the big occasion

Featuring in the Premier League’s developmental division gives youngsters the chance to play at some of England’s most famous grounds. And Willock has taken advantage of that opportunity by showing he is a man for the big occasion.

Last season his only two goals of the campaign came at Anfield and the Etihad.

Going into the 93rd minute against Liverpool, the game was tied at 0-0 before Willock popped up to head in the injury time winner.

Against Manchester City, it was his ability on the ball that helped him create his own chance. 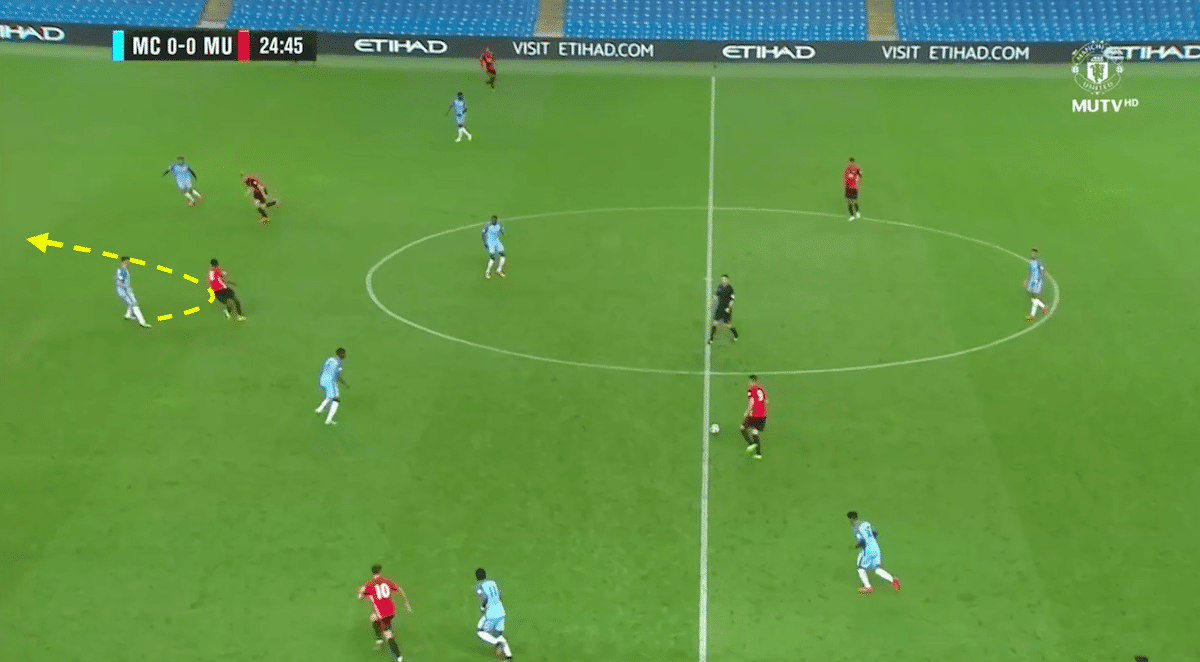 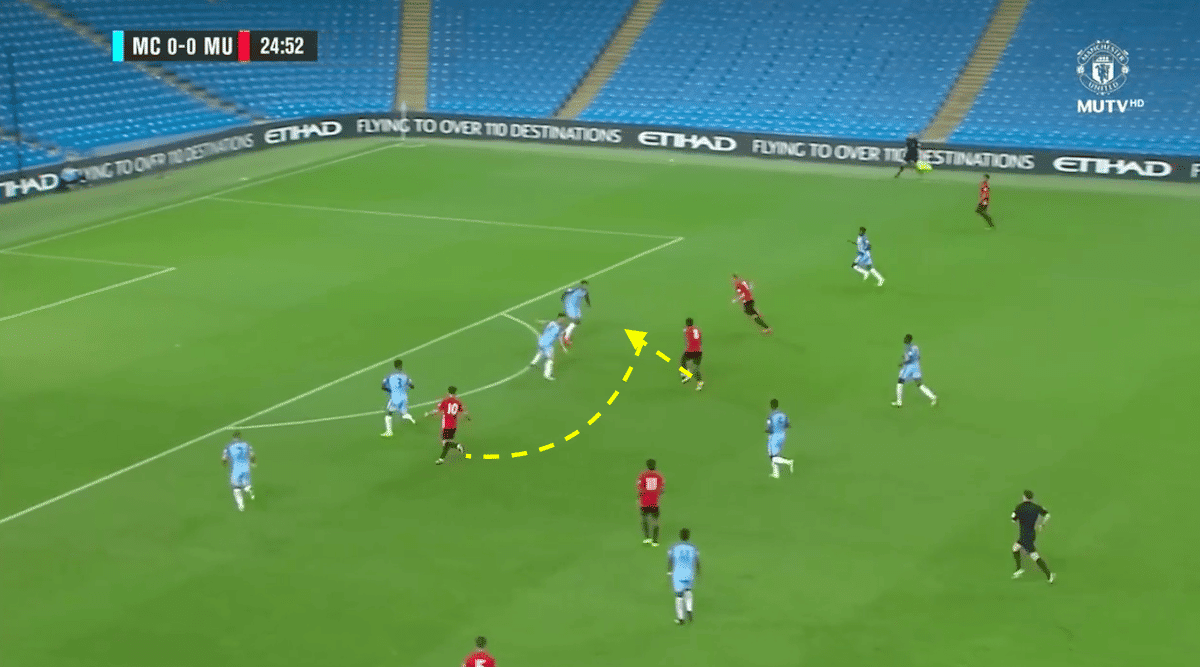 He receives a pass and works the ball on to his favoured right-foot. It looks like Willock is about to try a shot from distance but he cuts onto his left foot, dances into the penalty area and finishes calmly. 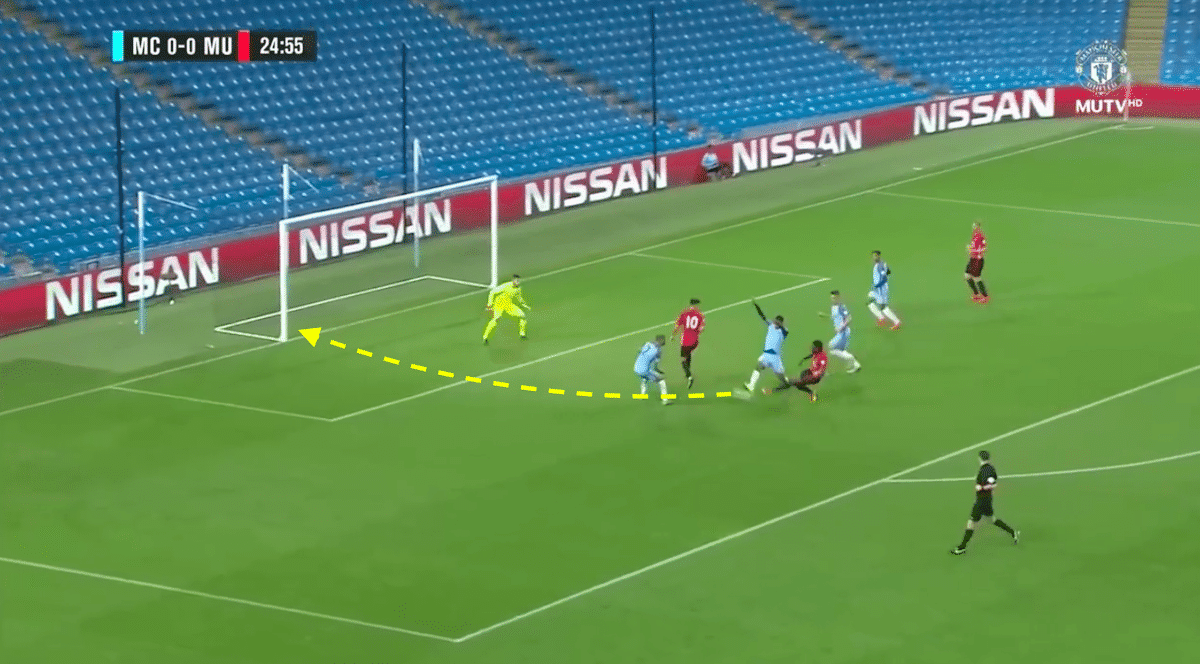 “I was a schoolboy at Arsenal but was released at 15,” Willock told the Manchester United club magazine.

“So I had trials at a few clubs, including Reading and Sunderland. I ended up signing for United. It was a bit disappointing when I left Arsenal but it worked out well.

“It is great as, when I was young, I always wanted to grow up and play for a big club. I didn’t think I was necessarily ever going to play for United so I am just happy to be here. If I keep working hard, hopefully I can push myself forward.”

There is little chance of the Ibrox club picking up Willock on a permanent deal as Mourinho obviously thinks a lot of him.

However, first-team football is the natural next step and Celtic have shown with Patrick Roberts that playing the Scottish Premiership can do wonders for a young career.

Rangers is the perfect home for the 20-year-old to show what he can do in a professional set-up and the side would become a better and more exciting with his signing.