The way the game has evolved over the last decade has seen defenders now given close to equal billing with their attacking colleagues.

No longer simply tasked as being the killjoy spoilers, preventing goals, they are now just as important to what a team does with the ball as without it, and are beginning to command the kind of transfer fees previously reserved for football's best scorers and creators.

As such, any time a young defender whose skills extend to elite levels of passing, control and forward-thinking, Europe's biggest clubs scramble for their signature.

This is exactly the situation 19-year-old Ajax centre-back Matthijs de Ligt finds himself in.

Despite his tender years, the teenage defender is a full international with Holland and boasts more than a season and a half of first-team experience with the Amsterdam club.

With a projected transfer value seemingly increasing by the week, and with the likes of Manchester City, Barcelona, Real Madrid and Juventus ready to break the bank to sign him, De Ligt is Europe's hottest defensive property.

Who is Matthijs de Ligt?

A product of Ajax's world-famous academy, De Ligt joined the club as a nine-year-old and rose quickly through the ranks in his teens.

He made his debut for Jong Ajax, the club's second string, in August 2016, with his rise to the first team coming a little over a month later, aged just 17, marking his debut with a goal to become the second-youngest scorer – behind Clarence Seedorf – in Ajax history.

In 2018, De Ligt was won the Marco van Basten Award, recognising Ajax's “talent of the year”, and came third in the ballot for the Dutch Player of the Year.

“He looks like he’s been doing this for six or seven years,” Ajax CEO Edwin van der Sar told . “Matthijs is very mature for his age: he has the physique of a 24-year-old.

“He is also strong with both feet, has an extremely good range of passing, can head the ball, scores goals and is a real leader at the back already at the age of 18.

“He came into the first team last year and has never looked back.”

Athletically built and standing 6ft 2ins, De Ligt has the tools to ensure the physical rigours of life as an elite centre-half don't get the better of him.

It is his technical attributes that are most eye-catching when watching the youngster play, though. Already an astute reader of the game with the ability to break up play with perfectly timed interventions, tackling or intercepting cleanly,  De Ligt is a revelation with the ball at his feet.

His total of 1838 completed passes was the better than any Eredevisie centre-back last season, while his ability to stride forward confidently into midfield zones with the ball at his feet saw him complete more take-ons (15) than 97.5 per cent of his positional peers.

Indeed, De Ligt's sense of adventure is evidenced by his average of 2.5 touches inside the opposition's penalty area per 90 minutes this season, more than all but two centre-backs in Europe's big five leagues.

De Ligt's ascension to first-team level was so rapid that some of his early outings were characterised by errors of judgment and poor positioning.

This was an issue at international level in particular, having been handed his first senior cap for Holland in March 2017 after just two starts for the Ajax first team.

He became the youngest player to start for the Oranje in more than 80 years in his debut against Bulgaria and it seemed the step up had come too soon. Holland lost 2-0 and De Ligt was substituted at half-time, culpable for both goals.

De Ligt has proven a quick learner, though. Now, with more than 70 senior club appearances under his belt, errors are few and far between, meaning no glaring weaknesses remain in the 19-year-old's game.

Indeed, De Ligt is such a trusted and composed presence that he is currently Ajax's vice-captain. 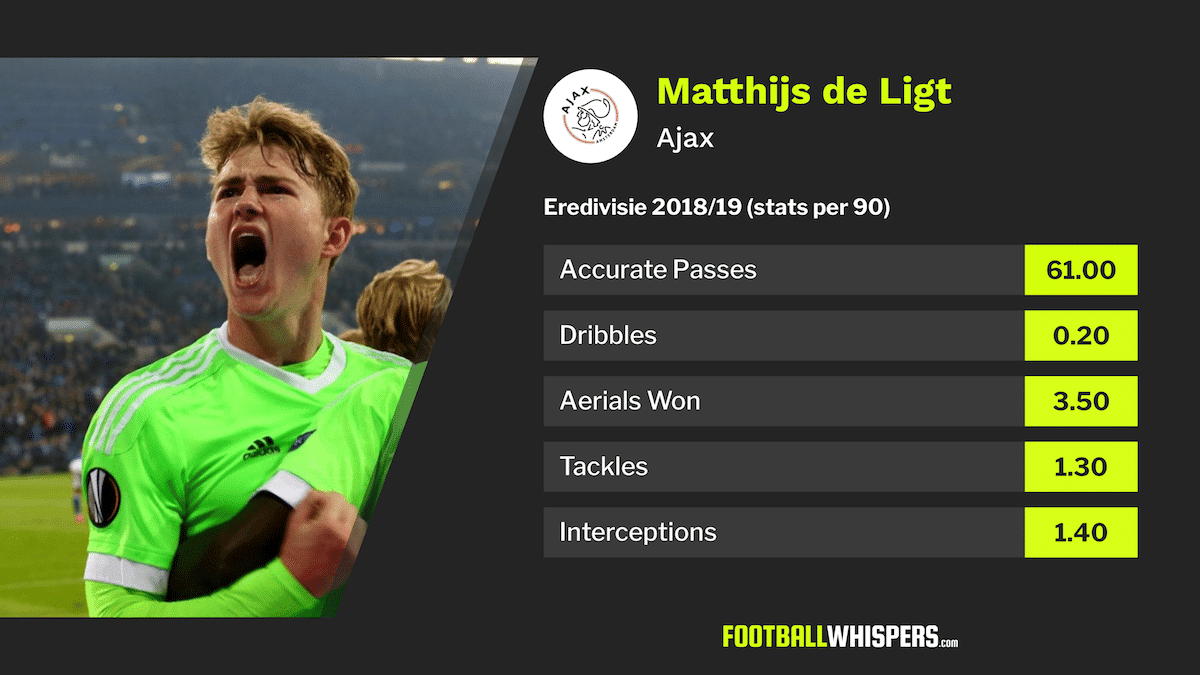 It seems likely that De Ligt will move on from the Johan Cruyff Arena next summer, at which point his transfer fee will be dictated by the amount of interest in him, the prestige and buying power of the clubs chasing his signature and how ably Ajax play the interested parties off against one another.

Conservative estimates at present place the centre-back's transfer value at around the £60million mark, but it is not beyond the realm of possibility that any fee for his services should move into record territory.

Whoever is prepared to bid highest. For the swath of European giants preparing to make their move for De Ligt in upcoming transfer windows, there are no obvious alternatives to the Dutchman; his age, style and ability make him a unique and therefore highly valuable proposition.

As such, De Ligt's next move will be determined either by whichever club bids highest for his signature or is able to to present the most attractive project to the teenage superstar.

Considering those factors, it is easy to picture De Ligt in the colours of Manchester City, Manchester United, Real Madrid, Barcelona, Juventus, Bayern Munich and perhaps a handful more.