When Matt Crooks left Rangers to join Scunthorpe United on loan in January, just six months into his Ibrox stay, there was little to suggest he would have a future at the club.

Crooks' switch to the Scottish giants had been a failure. Handed just three appearances by the then-Gers boss Mark Warburton, the midfielder has made a solitary SPL start.

At that point Crooks was a symbol of everything that had gone wrong at Rangers since returning to the top flight. With the side struggling following promotion – coupled with rivals Celtic storming to the title – Warburton and his signings were under scrutiny.

Crooks was subsequently shipped out on loan to promotion-chasing Scunthorpe. Last-minute winners in the victories over Rochdale and Bradford City, plus the appointment of Pedro Caixinha as Rangers boss, have raised hopes that the 23-year-old could have a part to play next season.

Great to see @mdrcrooks doing so well down at @SUFCOfficial … big summer ahead Matt, get back and earn your place!

What Rangers thought they were getting

The star of an Accrington Stanley side that ended up in the League Two play-offs despite being tipped for a season of struggle, Crooks arrived at Ibrox last summer with a degree of expectation on his shoulders given Rangers had secured his signature before the season was out.

A return of six goals from the centre of midfield during the 2015/16 campaign were enough to persuade Warburton to snap up the all-action midfielder and his Stanley team-mate Josh Windass – son of Hull City legend Dean.

An unrefined but energetic, physical and hard-working midfielder, Rangers were signing a solid player. Crooks' strengths lie in his ability to cover lots of ground and win the ball back with his tireless running and imposing physique.

In the still below, taken from his time at Accrington Stanley, Crooks closes down the Portsmouth player in possession, wins the ball and then follows the blue line to close down two more players and push Pompey back. 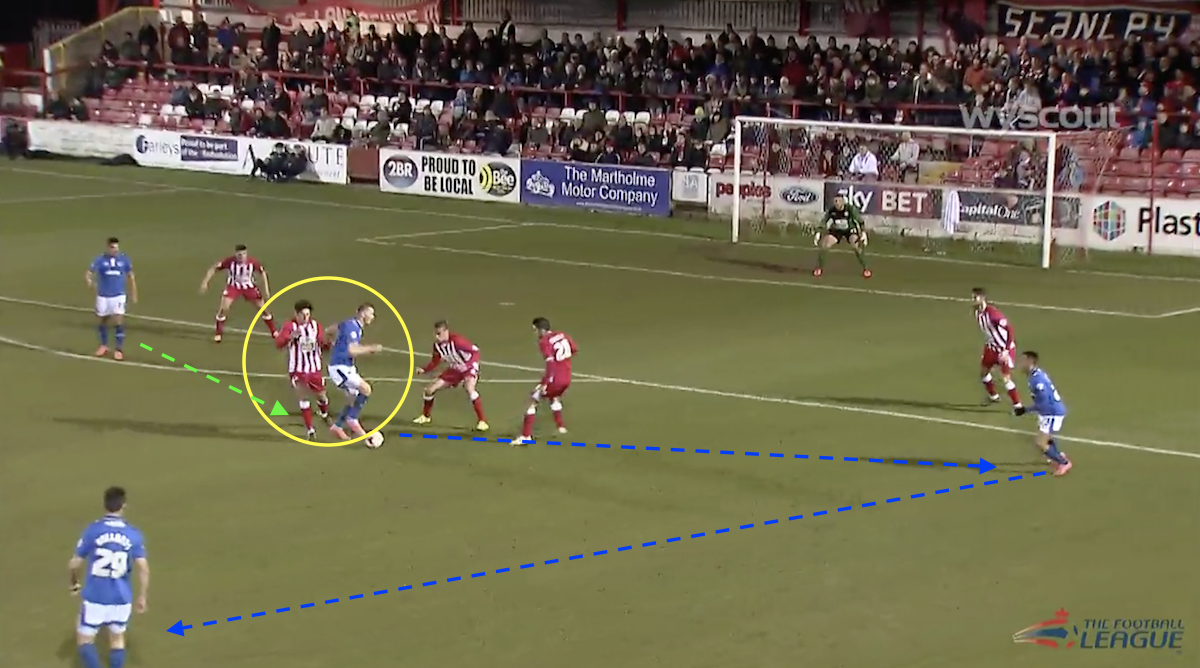 In the next image, against Wimbledon, Crooks senses the danger and quickly gets in front of the Dons player ahead of him, using his physique to win and then shield the ball for his team. 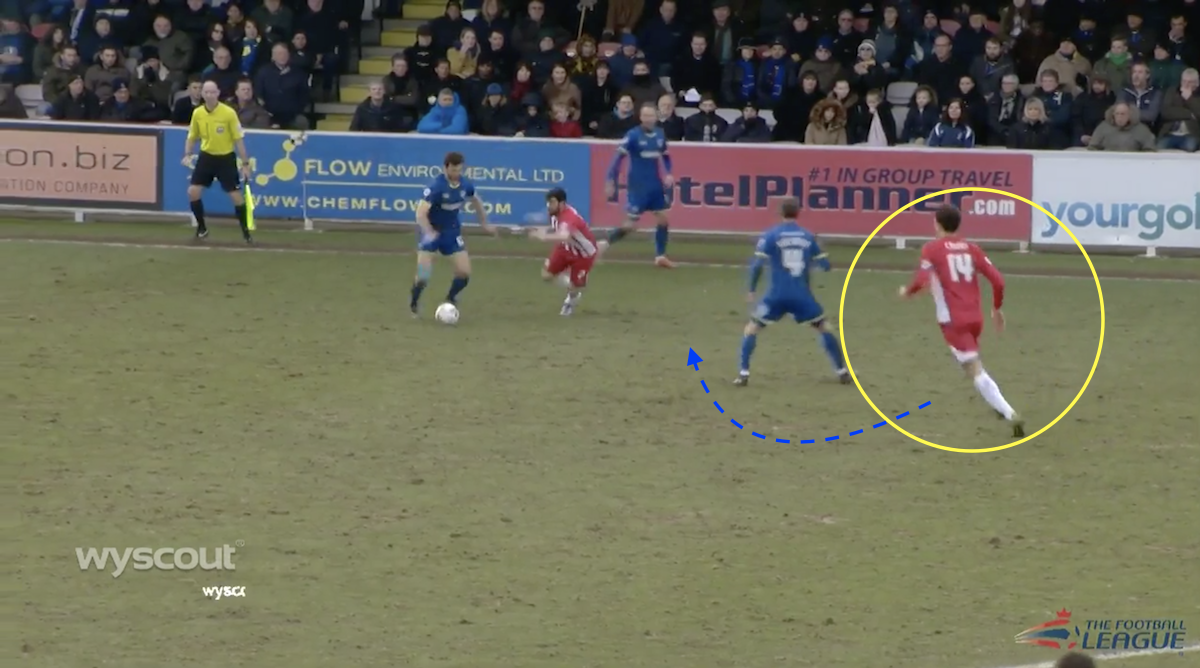 NOW READ: WHY A DIRECTOR OF FOOTBALL MAKES SENSE FOR RANGERS

Despite his imposing 6′ 4″ frame, Crooks has a knack of going unnoticed and getting into good positions to score. During his time at Accrington he scored a number of goals by appearing in space at the right time and two of the best examples are below.

First, against Crawley Town, he receives a lay-off before bursting into the green space and sweeping home first time with no Crawley player getting close to him. 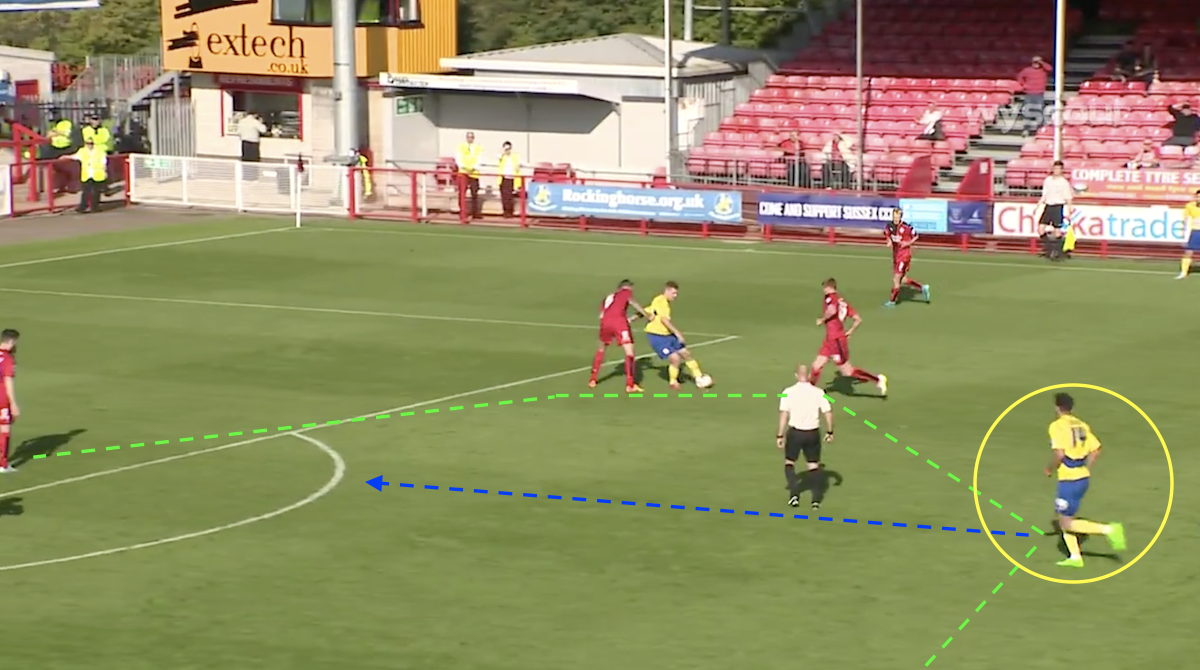 In the next example, against Barnet, he lurks on the edge of the Bees' penalty area, controlling Michael Nelson's (out of shot) header out to the edge of the box and side-footing past visiting goalkeeper Jamie Stephens. 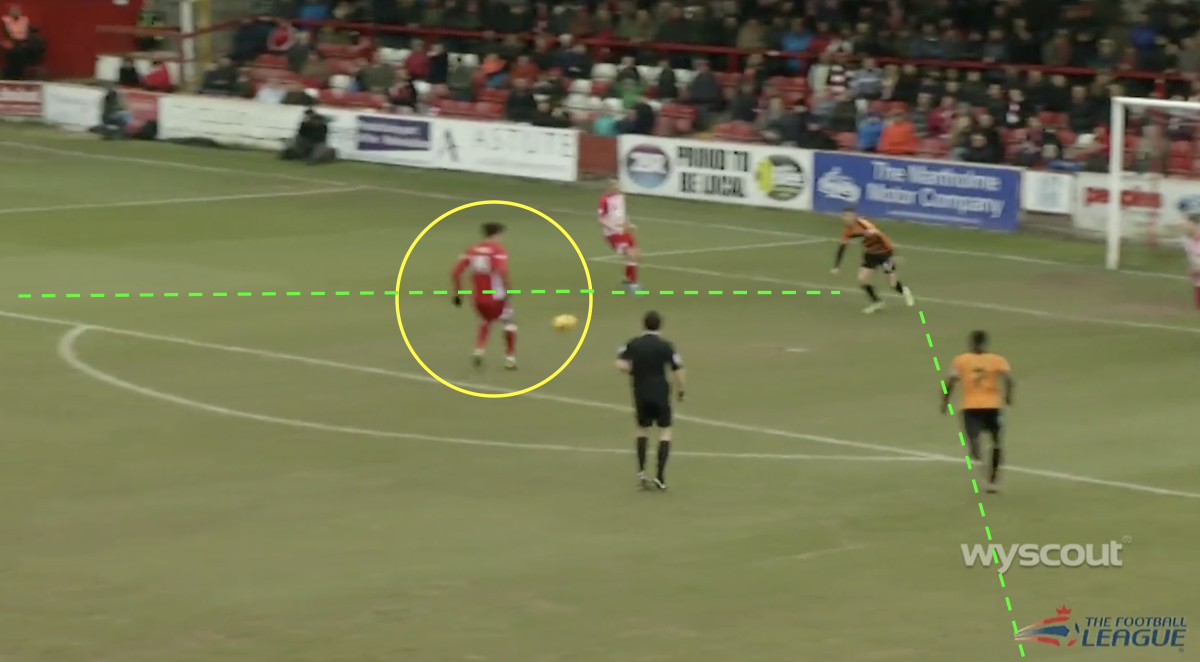 The player Rangers got

It is, admittedly, hard to judge a player on a combined total of 99 minutes across three matches – two of them as a substitute. However, first impressions – more so in football, perhaps, than life – are lasting and making a good one is imperative when it comes to proving your worth to supporters who might not have heard of you.

Crooks' one start was the 2-0 loss to Hearts at Tynecastle in November. It was a game in which Warburton's side struggled to ever get a foothold and mustered just one shot on target with Crooks withdrawn after 66 minutes. For that reason, Gers fans would be forgiven for viewing Crooks' showing through a negative filter.

Much of the game passed the 23-year-old by. But in the few chances he got to impress, he failed to showcase his ability. In the still below he makes a careless pass towards Joe Dodoo, losing the ball when his attempted effort is cut out by the Hearts defender. 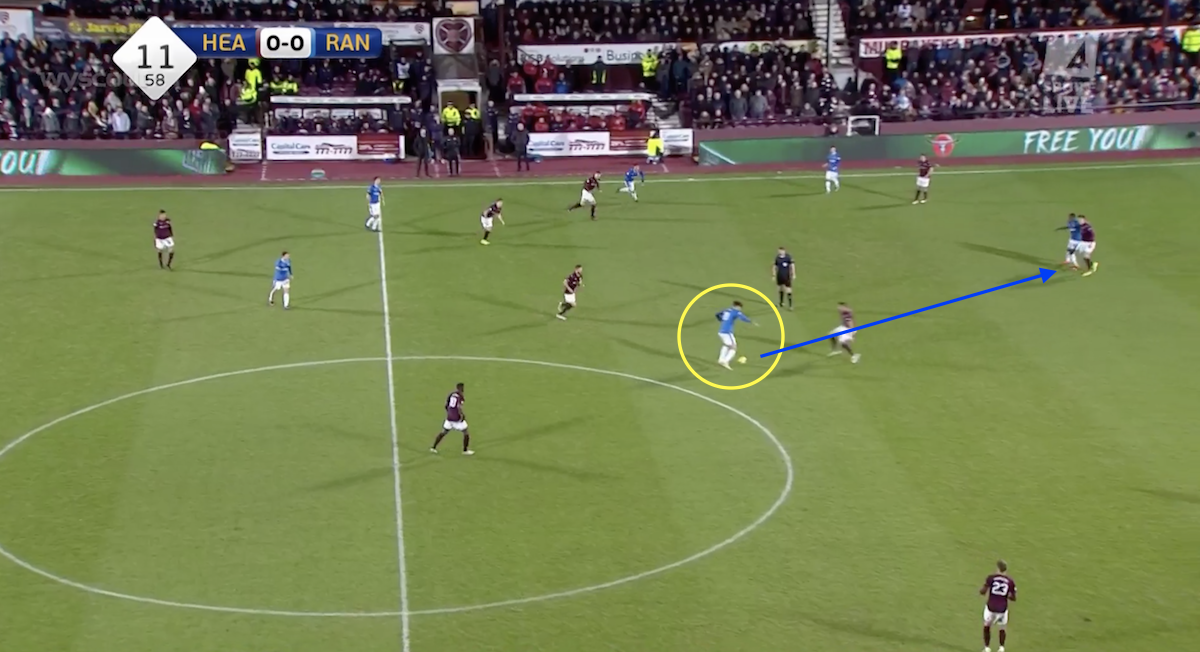 A couple of minutes later, Crooks surrenders possession again when he dithers on the ball and is quickly closed down by a Hearts player he appears completely unaware of. 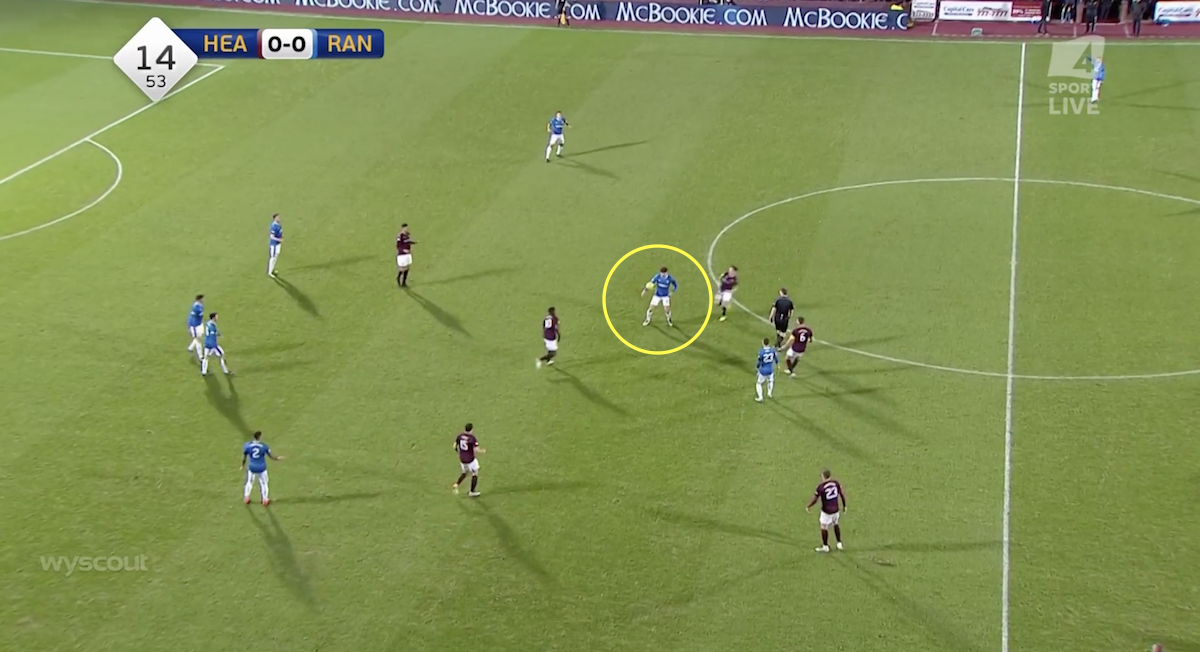 On the defensive side, Crooks was every bit as underwhelming and, at times, downright lazy. In the still below he shows none of the energy or willingness to close down that he did during his time at Accrington, letting the Hearts player in possession stride past him with ease. 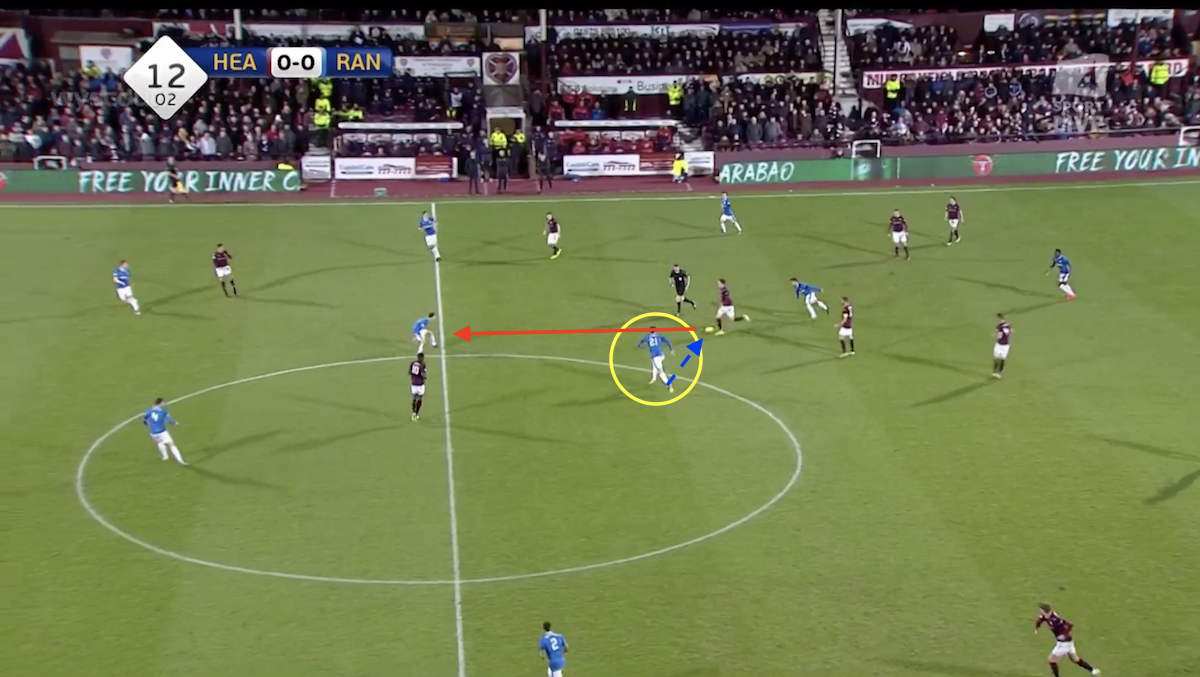 What are his chances next season?

It is hard to gauge Crooks' chances of making a breakthrough at Ibrox following the change of management. Warburton, though witness to a disappointing first half of the season, might have been tempted to offer him a clean slate given it was he who signed the player.

His replacement, Caixinha, will have minimal knowledge of the former Huddersfield Town youngster when he reports back to Ibrox at the season's end. Again, that could go two ways for Crooks, who will either get the chance to impress to Portuguese or find himself cast aside as the new boss brings his own men in.

What won't help his cause is the plethora of central midfield options already available to Caixinha, including Bournemouth loanee Emerson Hyndman who has bagged four goals in his first eight outings for the club. The American, who has yet to make a Premier League appearance for the Cherries, will surely be a summer target for Caixinha.

Youngster Liam Burt is another who has caught the eye and, in all probability, jumped ahead of Crooks at Ibrox. Ironically, the 18-year-old made his league debut for Rangers as a substitute in that loss at Hearts in December and is held in high regard in Glasgow.

Another option to consider is a return to Scunthorpe. The Iron, currently fourth in League One, look a safe bet for a play-off place – at least – come the end of the season. If they get promoted to the Championship, Glanford Park would be an attractive destination for Crooks.

It seems harsh to dismiss a player on the basis of less than 100 minutes' action. But football waits for no-one and Crooks might just find himself as a victim of circumstance when Caixinha starts to mould the Rangers squad in his own image this summer.

NOW READ WHY PEDRO CAIXINHA HAS PLENTY TO PONDER AT RANGERS