Despite investing heavily in their midfield over the summer, the middle third is where Everton boss Carlo Ancelotti is looking to strengthen.

However, early-season hope quickly turned into despair. Gbamin sustained an injury in August and he’s only just returned to training. Gomes missed two months of the season after a late Heung-min Son challenge dislocated his ankle while Delph has managed just 11 starts in the Premier League. Such misfortune has resulted in outcast Morgan Schneiderlin coming back in from the cold to surprisingly claim minutes in the Premier League.

James Rodríguez has been linked with a switch to Merseyside but recent reports in Italy claim Matías Vecino is close to putting pen to paper on a deal with the Toffees. The 28-year-old is being shown the exit door to make room for Christian Eriksen at San Siro. 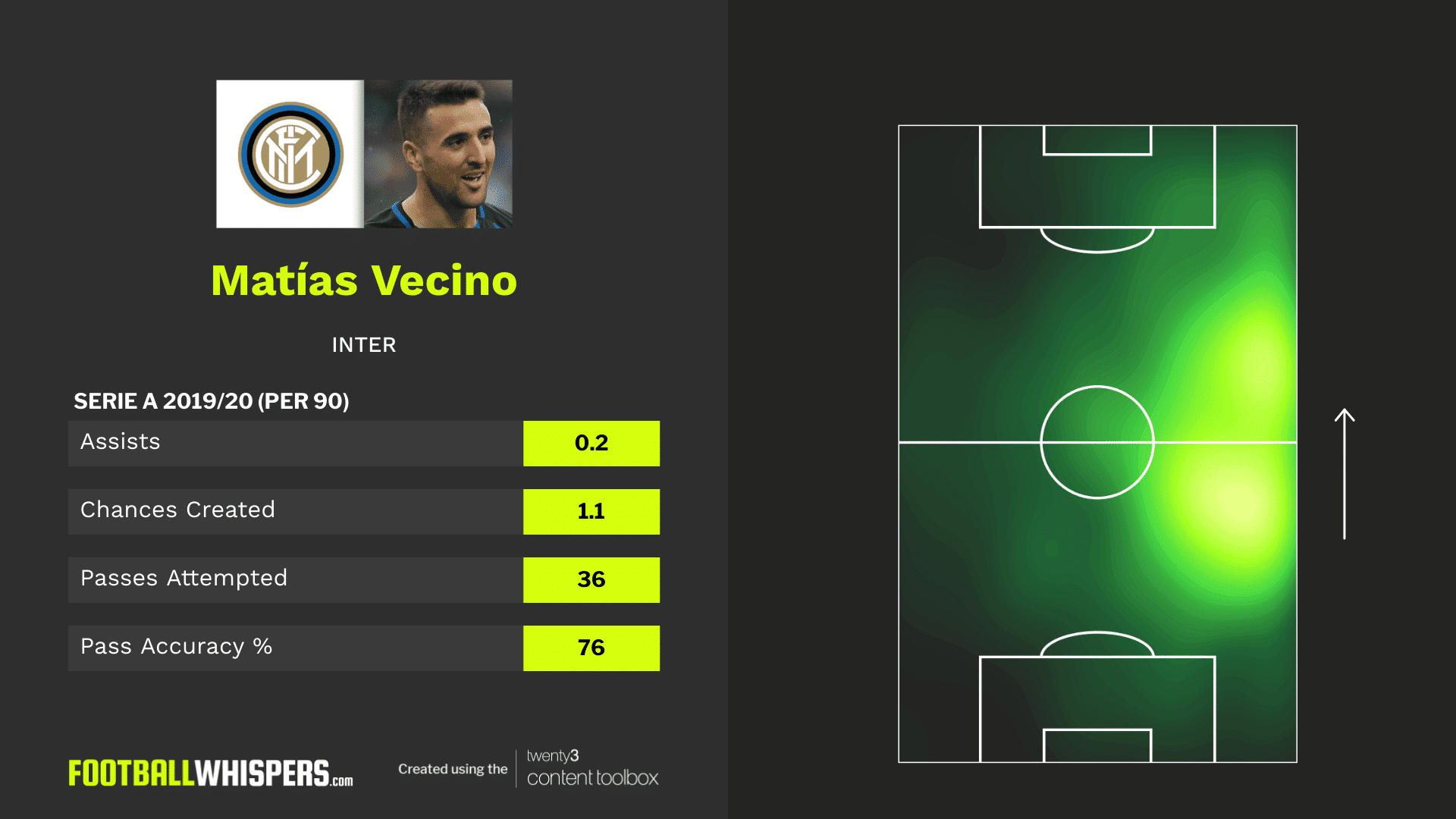 Vecino joined the Nerazzurri in August 2017 for a fee believed to be in the region of £20million. He’s been a key cog in the Inter team ever since, making 59 appearances across two seasons. The Uruguayan has also featured ten times for Antonio Conte’s side this season, despite not being in the former Chelsea coach's first-team plans.

The former Fiorentina man has struggled to adapt to the new style Inter have adopted. This season, he’s averaging fewer touches, playing fewer passes and his pass accuracy is down but, oddly enough, he’s created more chances per 90 minutes. He just isn’t the right fit for Conte.

He could be a shrewd addition to the Everton ranks, though.

The Toffees lack a ball progressor in midfield. Gomes retains possession and Delph keeps play ticking over. But neither really act as the link between the middle and the final thirds. Vecino averages 31 per cent of his passes forward, a total no Everton player can match.

He’s direct, progressive and incisive. He’s also comfortable in the final third, with as many as 30 per cent of his passes coming in that area of the pitch. Vecino isn’t a playmaker in the traditional sense but he can pick a pass and he can execute them. Exactly what Everton need right now to get their forwards firing.

That said, Vecino isn’t much of a goal threat. Over the last 18 months, he’s averaged just 0.12 open-play goals per 90. During that time he’s chipped in with 0.13 assists to take his goal involvement per 90 to 0.25. An impressive average for a central midfielder.

Tidy in possession, averaging 80 per cent pass success rate, his long ball completion rate is near 60 per cent. Vecino isn’t shy about getting his hands dirty, either. This season he’s averaged almost six ball recoveries per 90. For context, Delph, a midfield busy-body, averages 7.26 per 90.

The 28-year-old isn't a flashy name but, right now, Everton need players who can carry out their Italian tactician's plans. He's no Rodríguez and he isn't a signing to put the Toffees on the map, but Vecino could turn out to be the most important signings of the Ancelotti era at Goodison Park.

Once he's able to solidify the midfield, the Italian tactician can build. It's the area of the pitch which decides matches and it's the area the former Milan manager has always looked to dominate.