The devastating hat-trick at the Camp Nou against PSV. The wonderful Wembley display against Tottenham Hotspur. The sumptuous strike in Eindhoven. Leo Messi promised to do everything possible to bring the Champions League trophy back to Barcelona this season and he has more than kept his word.

Now club captain, Messi, as sobering a thought it is, is entering the latter years of his career. The Argentine will turn 32 next summer and, while there is no sign his otherworldly gifts are on the wane, time waits for no man. There will come a point when the enchanting dribbles are just that little bit slower. A time when his finishes lack the same unexpected explosiveness.

And perhaps that is why Messi is on a Champions League mission this term. Barcelona have exited the competition at the quarter-final stage in each of the last three seasons, the club’s legendary No.10 has insisted that must not be repeated.

“We've gone out three years in a row and the last time [against AS Roma] was the worst of all, because of how we played and that we came with a result that was in our favour,” he told Radio Catalunya in September.

Barcelona have already ensured their place in the knockout stages of Europe’s biggest club competition. They will top Group B no matter their result on Matchday 6. However, when Tottenham Hotspur visit the Camp Nou next Tuesday Messi will not let his or his team-mates’ standards slip.

The forward, due to injury, has only featured in three of Barcelona’s five Champions League group games. Yet he is the competition’s top scorer with six goals. He has also played more accurate through balls per 90 (1.66) than any other attacker while is second for open-play key passes per 90 (3.0).

His impact on the Barcelona side is unrivalled. When Messi plays well, Barcelona play well. It is that simple and was perhaps never more evident than against Spurs in October.

Under the Wembley arch, Messi was imperious. The Telegraph described it as ‘one of the great Champions League performances’. The Independent, meanwhile, labeled Messi ‘a genius beyond comprehension’.

He was involved in all four goals in Barcelona’s 4-2 victory and also struck the woodwork twice. Every one of his 96 touches that night were that of a master at work. 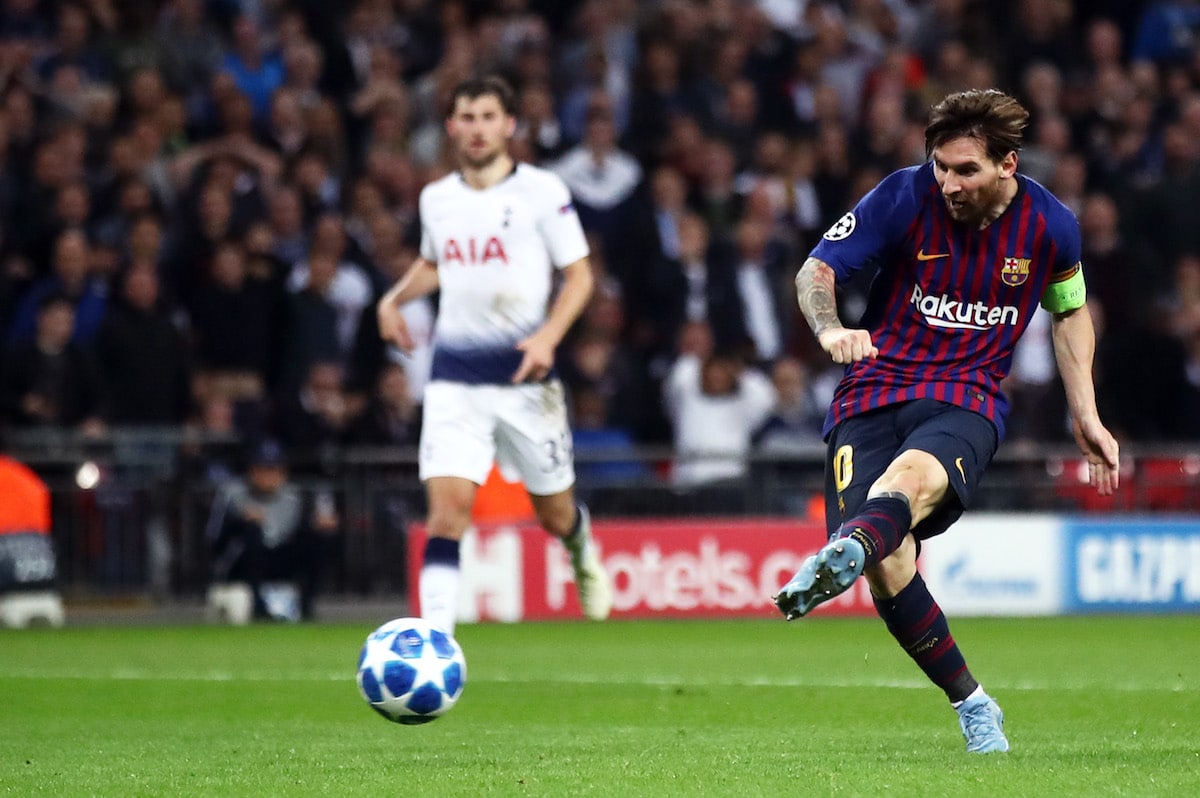 The chance to watch Messi should never be passed up, and that is especially true this season in the Champions League. His laser-like focus on winning the competition is bringing out the best in him. And there is the added incentive of reclaiming his crown from Cristiano Ronaldo as Europe’s most prolific marksman.

Between 2008 and 2012, Messi was the undisputed king of the Champions League. He finished as the competition's top scorer four seasons running, during which Barcelona twice lifted the trophy.

But Ronaldo, his biggest rival, has taken goalscoring in the Champions League to new heights in recent seasons. He struck 16, 12 and 15 times as Real Madrid clinched three consecutive titles.

Now at Juventus, the Portuguese often saves his best form for the knockout stages. But with only one goal to his name so far, he is well behind Messi’s tally in this season’s competition. And the Argentine will hope to put further distance between them on Matchday 6 against Spurs.

“Messi does extraordinary things and makes them look routine,” Barcelona coach Ernesto Valverde said after Messi’s hat-trick against PSV. “When he stops playing it will be difficult to find someone like him.”

Valverde was being somewhat generous with that final sentence. When Messi stops it will be impossible to find another like him. He is unique, a one-off. A humble genius. And one who is determined to keep his promise and return to the Champions League to Barcelona this season.