One man's misfortune is another's fortune, they say. For Everton defender Mason Holgate, that could not be truer.

The 23-year-old was halfway out the Goodison Park exit door in the summer. According to The Sun, Bournemouth, Burnley and Sheffield United were circling for the £10million-rated defender and Toffees boss Marco Silva was happy to sell.

Holgate had just returned from a six-month loan spell at Championship side West Bromwich Albion. The feeling was the England Under-21 defender was expendable with Everton trying to sign another central defender.

But a deal for Kurt Zouma never got off the ground while talk of a move for Chelsea team-mate Fikayo Tomori was equally fanciful. That was his first stroke of luck.

So, with Phil Jagielka moving to Sheffield United, Holgate stuck around as de facto third-choice behind Yerry Mina and Michael Keane. The former Barnsley prospect had a point to prove – not least because he'd spent his time at The Hawthorns playing at right-back – and has grabbed his chance with both hands.

Holgate did not make a Premier League start until October 26, deputising for the injured Mina in a 3-2 loss at Brighton & Hove Albion. It might not have felt like it at the time but that gut-wrenching defeat was Holgate's next lucky break. He kept his place and started the Toffees' next five in all competitions.

His restoration to the side did not provide the upturn in results Silva so desperately needed and the Portuguese was sacked after a 5-2 thrashing at the hands of Merseyside rivals Liverpool at the start of December.

But Holgate has kept his place ever since with Colombian powerhouse Mina alongside him for all but three. England's tormentor at the 2018 World Cup after his late equaliser forced stoppage time in the last-16, Mina grabbed the headlines on Saturday with a brace against Watford as the ten-man Toffees came from 2-0 down to win.

Equally important in securing the win was Holgate. He underlined his versatility once more, this time stepping into midfield to deputise for Fabian Delph following his dismissal. In doing so he went toe-to-toe with Watford's twin midfield powerhouses Étienne Capoue and Abdoulaye Doucouré.

No-one on the field at Vicarage Road completed more passes than Holgate (48), while he won 100 per cent of the attacking and defensive aerial duels he contested, made eight ball recoveries and completed two interceptions for the visitors.

It was the kind of performance which would have left Silva red-faced at the prospect of selling him. 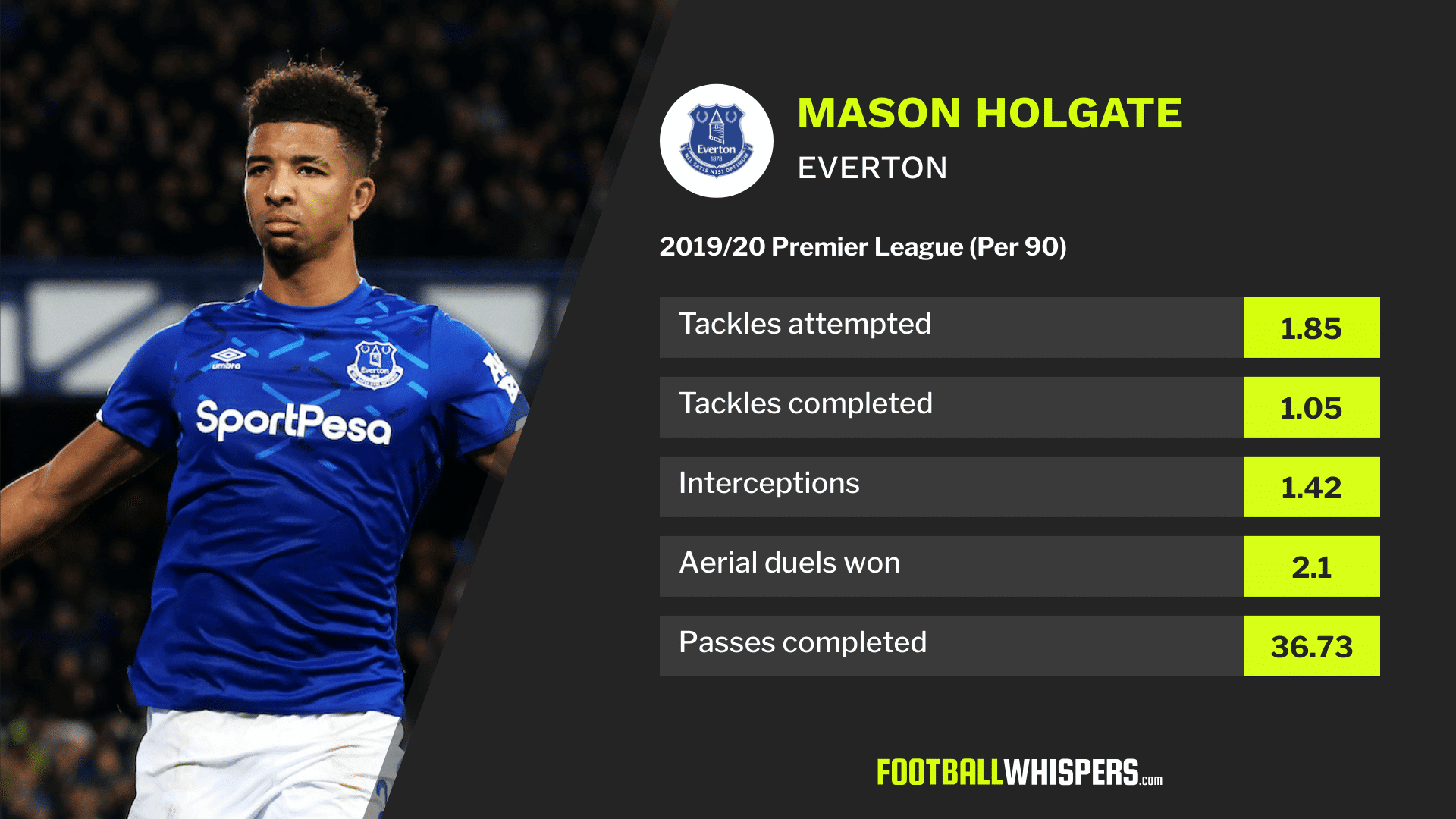 Now his new boss, Carlo Ancelotti, is keen to tie Holgate down to a new long-term deal, according to the Daily Telegraph.

The feeling is mutual, too. Holgate believes the arrival of the three-time Champions League winner has benefitted his game.

“If you look around the team, it’s not just me but everyone who has been getting better and better,” he said.

“The mentality has lifted and that’s shown in our performances and we’ll be able to get stronger as we get used to doing our jobs properly.”

It's hard to ignore the evidence. Since Ancelotti took over from interim manager Duncan Ferguson on December 21, Holgate has seen a significant spike in a number of key metrics.

More impressive, though, is his increased involvement in how Everton progress the ball once in possession. From averaging 25.37 completed passes (per 90) under Silva and Ferguson, Holgate now finds a blue shirt with 48.38. He's also averaging considerably more attempted passes – up from 33.78 (per 90) to 56.13.

Holgate's comfort in possession is little surprise when you learn the defender models himself on Real Madrid and Spain captain Sergio Ramos.

“Although he is a ball-playing defender, he’s also physical and he throws his body around. I’ve watched him since I’ve been 18,” he told the Daily Star.

“I’ve always saw myself as a ball-playing centre half like him, but to be able to do both as well as he does is something I’ve always watched and enjoyed.”

His new manager coached Ramos at the Santiago Bernabéu and can count some of the finest defenders of all-time among his former pupils; Paolo Maldini, Alessandro Nesta, and Billy Costacurta at Milan and, more recently, Kalidou Koulibaly, Mats Hummels and Tiago Silva.

Holgate has a long way to go to reach those levels, but if Ancelotti can have anything like the impact on Holgate he had on the others, he is in good hands.