Maryan Shved was one of the most unnecessary January transfer window signings in Celtic’s recent history.

The 21-year-old joined for a fee of around £2million three months ago but with competition for places rife he was instantly sent back out on loan to Karpaty Lviv. However, there are signs that he could go on to become a success for the Scottish champions.

When the Ukrainian was closing in on his move to Glasgow, he didn’t exactly get the traditional new-signing hype from his new manager. Brendan Rodgers, who has since left for Leicester City, seemed completely underwhelmed by the deal.

“I can't say I know a great deal about him but what I have seen he is a talent and something that will probably benefit the club in the future,” Rodgers said. “We've got about a million wingers and don't need another one but he's a talent and in the summer we'll probably lose wingers and he'll look to come in.”

While their former manager wasn’t so enthused, Celtic supporters have reason to be excited about Shved’s prospects. Since returning to Ukraine for the rest of the 2018/19 campaign, he has been in excellent scoring form. He has hit the net five times in his last four outings for Karpaty, taking his tally for all competitions this season to 13 in 22 appearances.

The youngster spoke positively about his form recently whilst reaffirming his desire to make an impact in Scotland when he does eventually arrive. “I feel like I am improving all the time and adding goals to my game has been a bonus,” he said. “I go to Celtic in the summer and I feel I can handle the move. I am playing with confidence and influencing games.”

Shved has shown his versatility this term, playing in a variety of roles for Karpaty. Having started off as a striker, he has spent more time operating on or near the right wing in recent months.

A natural left-footer, he likes to cut in from the right and drive at defences. He isn’t a classic wide man and doesn’t spend vast swathes of games next to the touchline getting chalk on his boots in order to get into one-vs-one situations, hit the byline and whip in crosses. Instead, he comes inside to the more central channels and looks to combine, link moves and create scoring chances.

The below highlights the areas Shved likes to provide influence. He drifts away from the frontline and drops deeper towards the middle third, where he receives the ball. From there he dribbles towards the opposition back line, draws out the circled defender, and immediately plays a through ball for his teammate to score. 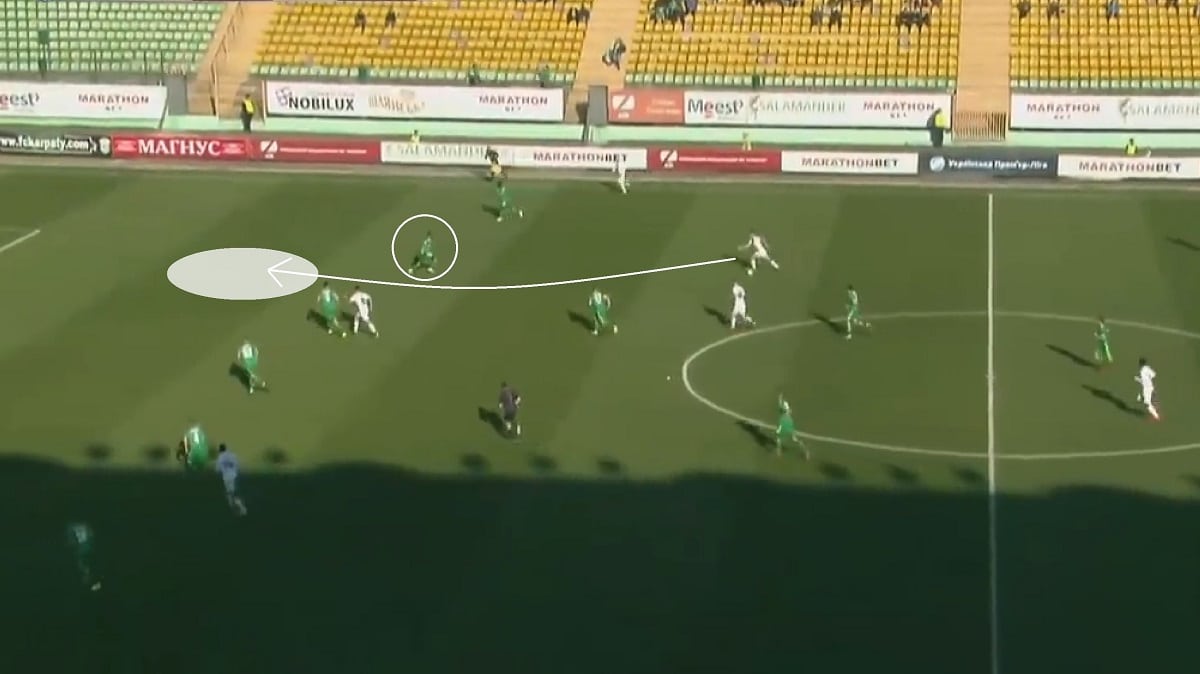 In the above situations, the 21-year-old thrives. He has time and space to make a decision and pick his pass, providing accuracy and penetration to break the lines and set up good shooting opportunities for others. However, while his quality on the ball is obvious, it is the subtler work he does off-the-ball that make him a potential Celtic star.

Under Rodgers, the Scottish Premiership leaders played a positional attacking game that focused on overloading certain areas, isolating dribblers out wide and getting players between the lines. Shved already seems to have a good understanding of the latter principle.

Below, he can be seen moving into the space that has opened up between the opposition’s defence and midfield lines. Having laid the ball off to a teammate, he makes his run and receives in a good position. From there he can directly attack the opposing back line, and he ends up taking a shot from just outside the penalty box. 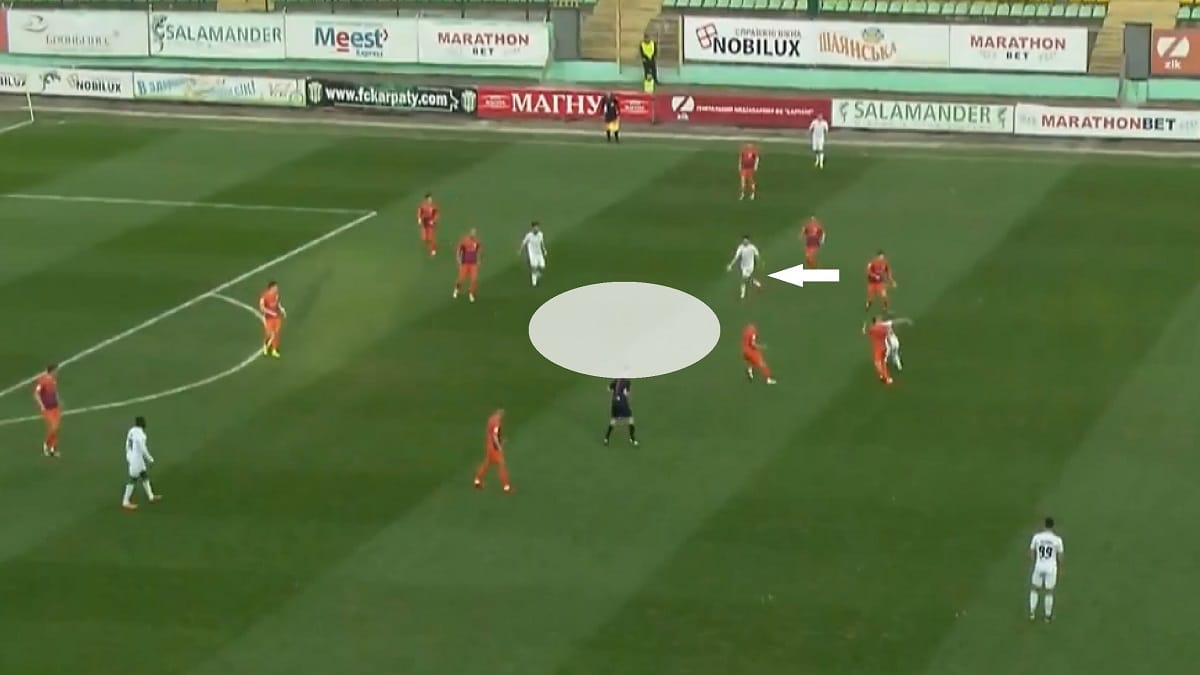 Shved will have to fight for his place when he returns to Celtic. Even if Timothy Weah and Oliver Burke go back to their parent clubs, Scott Sinclair, James Forrest, Jonny Hayes, Mikey Johnston and Daniel Arzani will remain as options for the nominal wing berths.

Fortunately, the Ukrainian’s stats suggest he can challenge for a regular starting spot.

Despite playing for a struggling team in Karpaty, he is averaging more shots on target and more successful through balls per 90 minutes than Forrest or Sinclair, who have been Celtic’s first-choice ‘wingers’ this term. He is also averaging more accurate crosses and dribbles and shot assists than the latter.

Shved is also prepared to get involved defensively. Not only are his reactions to losing possession positive – he often applies instant pressure to the opposing ball-winner – but he is averaging more successful defensive duels and interceptions than both Forrest and Sinclair, as well as more recoveries in the opposition half than the Englishman.

On top of all that, the 21-year-old is a good deliverer of crosses from set pieces and has a turn of pace that can threaten on the counter. He isn’t perfect, however – he needs to improve his decision-making in the final third and become more impactful when dribbling at his opposite man.

While still raw, Shved is exactly the type of player Celtic should be signing. He’s talented, fits their tactical approach and is young enough to develop into a real attacking influence for the team. He joined the club without much fanfare, but soon he could be making plenty of noise.