Lautaro Martínez has been viewed as Luis Suárez’s long-term replacement at Barcelona for quite some time now.

The Argentine international has been linked with moves away from Internazionale virtually since the moment he arrived at San Siro in 2018. It's been constant background noise. There might not be an agreement in place but there is an air of inevitability that the former Racing youngster would one day call the Camp Nou home.

It’s why recent reports claiming Real Madrid are prepared to pay his €120million release clause came as a surprise.

According to TyC Sports, Los Blancos are ready to make Martínez the most expensive Argentine ever. Despite investing heavily in Rodrygo Goes, Vinícius Júnior and Luka Jović, as well as Eden Hazard, the LaLiga leaders are convinced it is the 22-year-old who can lead their attack into a new era.

Real Madrid, along with neighbours Atlético Madrid and a host of other clubs reportedly courted Martínez before his switch to Inter. Their interest isn’t new but the aggressive manner of their approach is.

With other teams baulking at the fee and Barcelona in a bit of a transfer pickle having spent close to €400million on Ousmane Dembélé, Philippe Coutinho and Antoine Griezmann, Zinedine Zidane's side have what appears to be a clear run at Martínez.

And they should make the most of it.

On paper, the Real Madrid squad is well stocked in all of the right areas. Yet when analysed properly, it is clear the squad is overly reliant on one player.

It goes under the radar but Benzema has been the glue that has held the Madrid attack together for well over a decade now. Initially, the Frenchman allowed Cristiano Ronaldo to do what he did best before stepping up to the plate after the Portuguese legend departed for Turin.

He went from facilitator to goalscorer. From a sideshow act to the main attraction. His goal return jumped from five in LaLiga to 21. He's currently on 13 from 22 league starts this term. For the first time in his career, he's set to hit 20 league goals in back to back campaigns.

Real lead the way in LaLiga this term and are currently clear of Barcelona by a single point. Benzema's goals have fired them into this position. But, at 32, they need to start planning for life after the former Lyon man.

While everyone is fixated on why Martínez could succeed Suárez, they overlooked the fact he's also an ideal replacement for Benzema.

Though they differ physically, stylistically they share a number of traits. Benzema puts the needs of the team before his own. He sacrificed personal goals to ensure Ronaldo and Gareth Bale could hit the heights they did. Martínez is doing the same with . 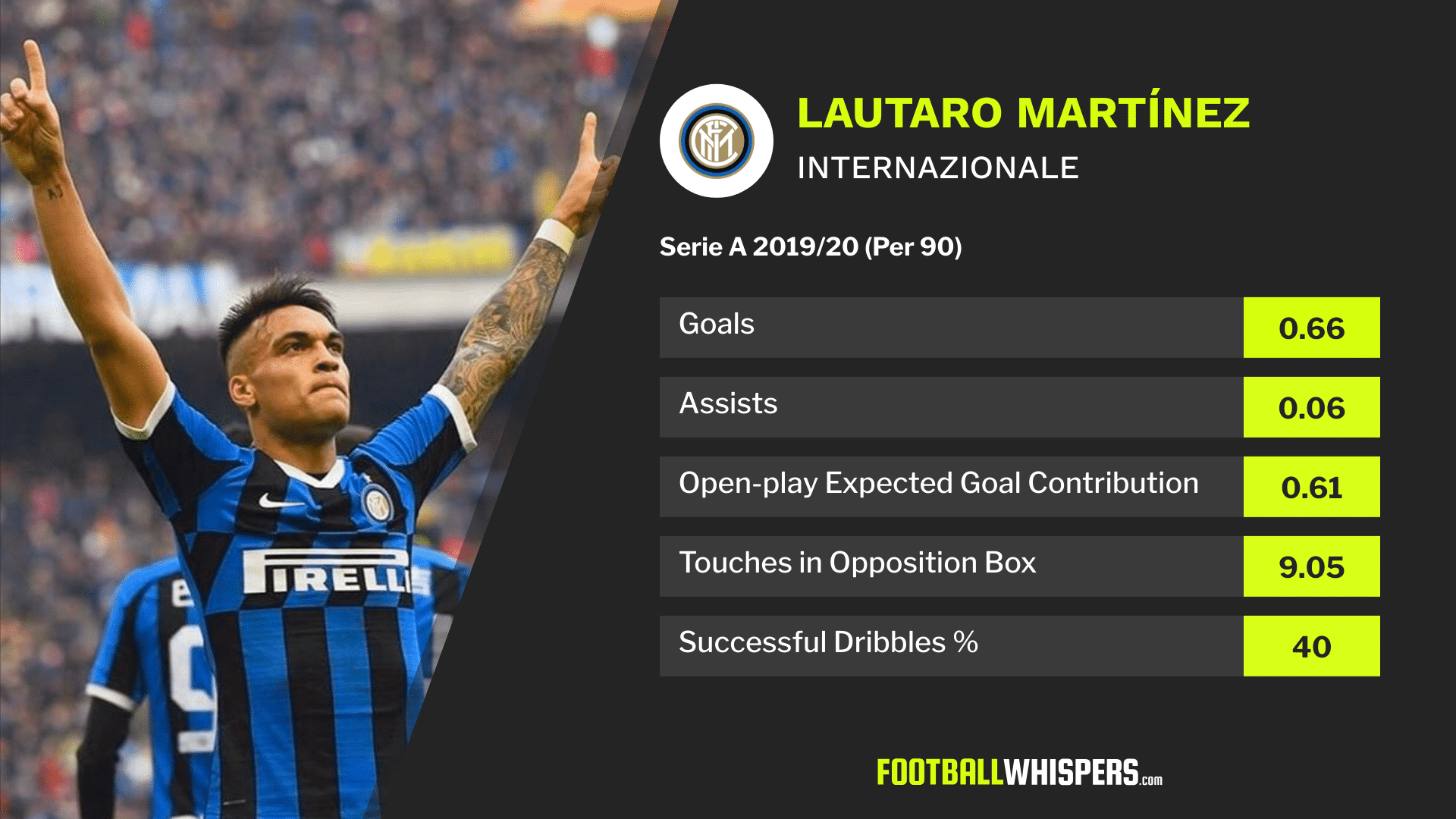 The pair have struck up quite the understanding this season but it is the Belgian who leads the way for goals in Serie A for the leaders. The 22-year-old could be more selfish at times but it's his selflessness which allows Lukaku to be at his destructive best. And Inter are better because of it.

Martínez is still getting amongst the goals. He's averaged 0.66 (per 90) this season of which 0.42 are from open play. The form the Argentina international is showing is sustainable, too, with his open-play expected goal contribution coming in at 0.61.

The Inter No.10 is a volume player, averaging more than five shots per 90 – an average only surpassed by Ronaldo in Serie A this season. Depending on shot location, this can be a negative. But Martínez is taking four of his shots inside the area, making him a potent threat. For context, Lukaku doesn't even average that amount of shots per 90.

He's having an absurd amount of touches in the penalty area, an average only two players in Serie A can better, and he's a progressive ball-carrier, completing 40 per cent of his dribbles. 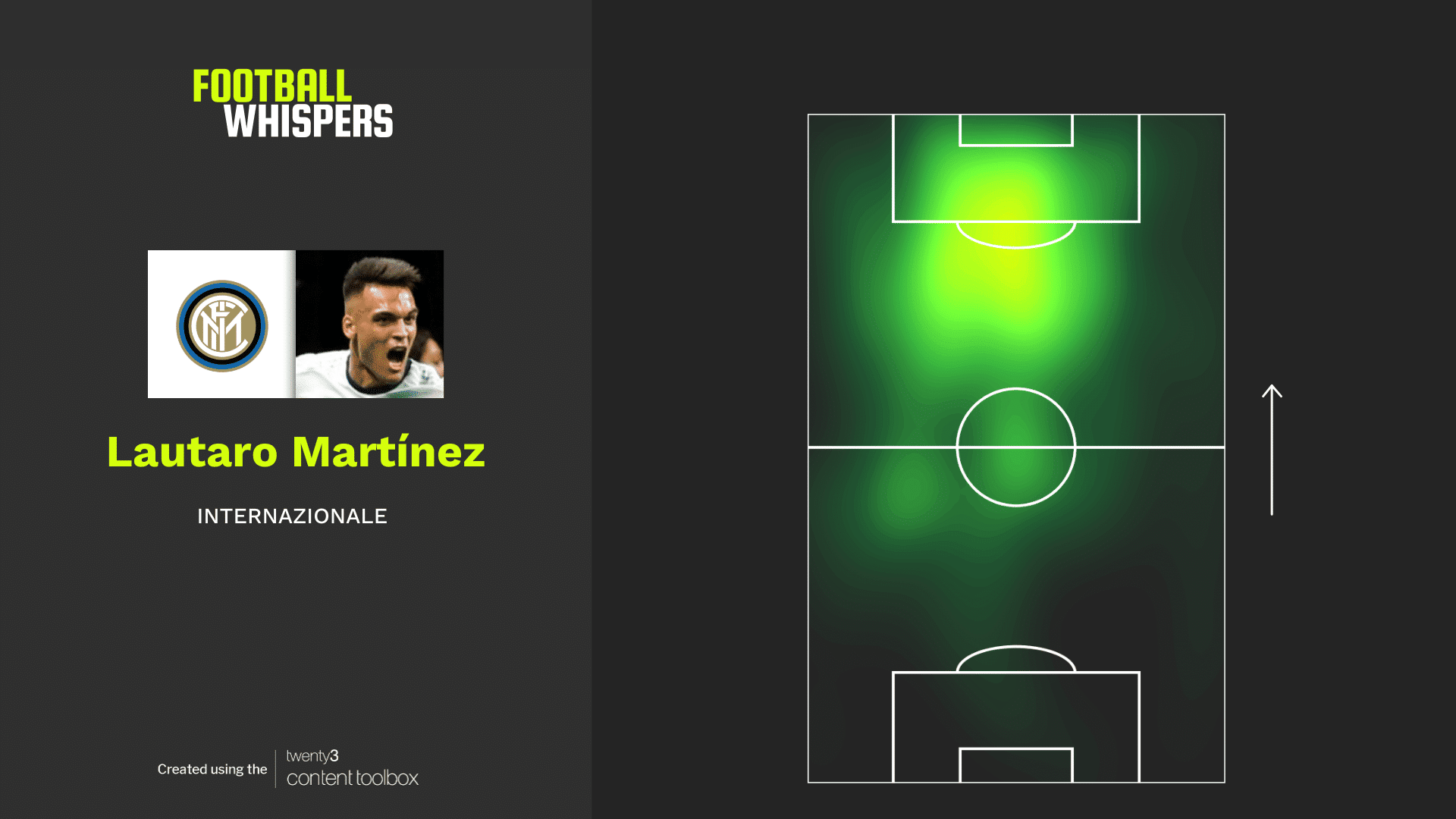 Martínez's heat map shows he isn't just a penalty box poacher, despite his stats, and that he operates throughout the middle third. Better still, he is only going to improve with age. The versatile forward is already adding value to his efforts with his shot selection and he's shown he has the nous to be in the right place at the right time, too.

Martínez has done all that without stealing the limelight from others.

He could be Real Madrid's next Benzema. The price is much steeper now, the Frenchman joined for €35million in 2009, but times have changed and he'd still be cheaper than any of Dembélé, Coutinho or Griezmann.

Realistically, Martínez could lead the line for the 13-time champions of Europe for the next decade.