There are few sides at this summer’s World Cup that can match the quality of Belgium.

There is one rather gaping hole in their lineup, though.

It is a strange quirk of this generation of Belgian players that for all the superstars they have produced, they have yet to produce an adequate left-back. For years, this has resulted in Jan Vertonghen being shoe-horned in on the left side of the defence.

This is something of a waste, given the Spurs man’s quality, but with Manchester United transfer target Toby Alderweireld and Vincent Kompany to call upon as a centre-back partnership the Red Devils have got away with it.

Roberto Martínez, in typical fashion, has attempted to think his way around this deficiency, though. For this World Cup, he has deployed a back three, using Vertonghen on the left-hand side of the defence, but ahead of him he has played Yannick Carrasco as a wing-back. That’s the same Carrasco who has played as an out-and-out attacker for all of his career up until now.

This has drawn derision from some quarters and there were signs in the opening group game performance against Panama that opposition sides will be able to expose Carrasco’s weakness as a left wing back. In this decision, Martínez has made himself a target, with the Spaniard burdened with the pressure of ensuring Belgium’s golden generation fulfil their potential.

The injury suffered by Manchester City skipper Kompany in the lead up to the World Cup might force Martínez's hand, though. The centre-back was missing for the opening group game against Panama, with Dedryck Boyata taking his place alongside Alderweireld. That is quite the drop-off in quality.

Boyata might have been considered a promising young defender at one time, but he has forged himself a reputation as something of a liability over the past two seasons at Celtic. Panama did not cause any problems for Belgium, but higher calibre sides will surely test Boyata. That might not work out too well for the Red Devils. 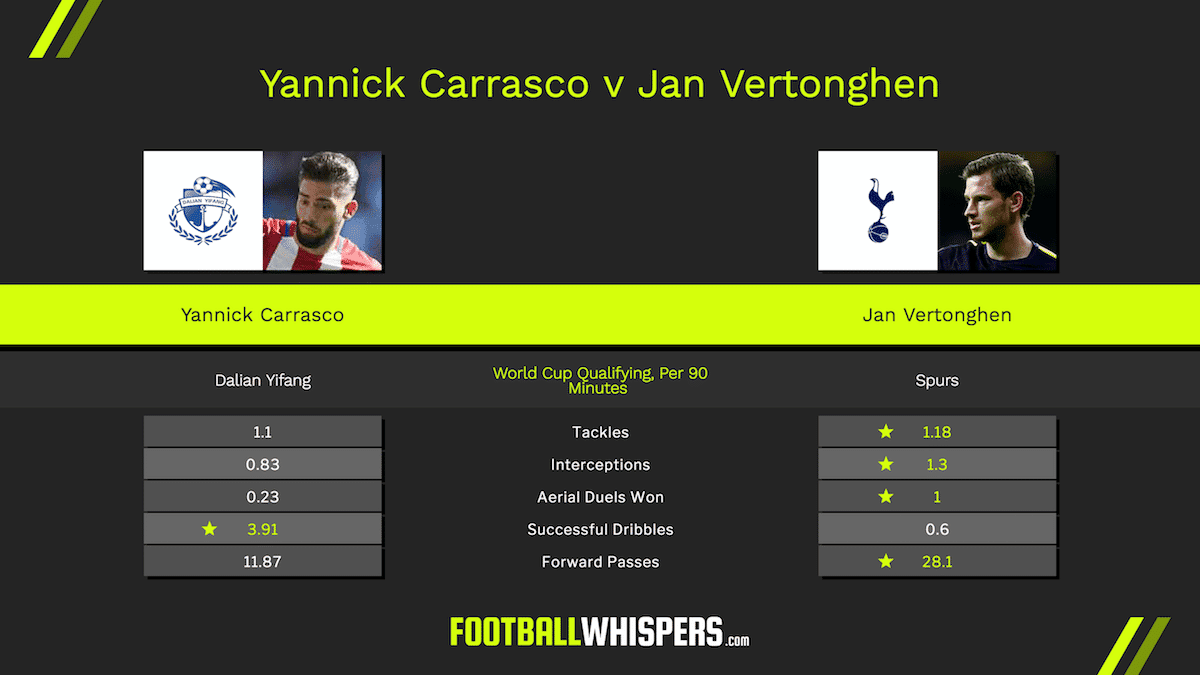 And so Martínez might ultimately switch back to a flat back four, with Vertonghen on the left side of the defence. That way, Belgium could pack things tight in the middle, pushing Vertonghen into a more central role when defending. Otherwise, the back three could leave space for sides to expose between Carrasco and the left-sided centre-back.

It wasn’t so much that Carrasco was poor against Panama, in fact he was one of the better players on the pitch, it’s that his deficiencies as a wing-back will be exposed against a better team. Positionally, he was suspect, allowing his natural attacking urgencies to get the better of him on more than one occasion.

Carrasco made many of the same runs as Hazard and Dries Mertens, often stepping on the toes of his team-mates. This resulted in the 24-year-old failing to register a single cross in 90 minutes of play, also making just one dribble.

Football Whispers' exclusive Player Persona model, below, characterises Carrasco by his statical traits from the season gone which show him to be a player who embarks on a lot of dribbles and takes plenty of shots. Defending, unsurprisingly, is not a big part of his game.

Statistically, Carrasco threatened to make an impression, but his performance flattered to deceive. He offered little in the way of attacking threat and even less in the way of defensive nous.

In no way is the former Atlético Madrid man, who now plays in China, a good fit for that position. Unless Belgium are chasing a goal with only minutes left to play, when they plan on overloading the opposition defence with attacker after attacker, he should not be deployed there.

As part of a holistic game plan from the start, though, Carrasco is a complete misfit.

Martínez's use of Carrasco is reflective of the way he is shunting a number of round-shaped pegs into 11 square pegs. He has come up with a system that he wants to work, but doesn’t have the personnel to implement it.

Perhaps even more pressing a concern is the space that tends to open up between the defence and midfield. “Mexico were just tactically better,” De Bruyne explained after a draw against El Tri in November. “Their system made our five defenders sit deep and we were swimming in midfield – it was five against seven.”

Belgium started their World Cup campaign with a 3-0 win over Panama, but there are a number of issues for Martínez to resolve if they are to make a run deep into the latter stages of the tournament.

Most of those issues come back to the system, though. The system that sees Carrasco bafflingly shoe-horned in as a wing back.