Almost as soon as Tom Rogic’s stoppage time winner had hit the back of the Aberdeen net to clinch a historic Treble, Celtic were drawing up their objectives for next season. Brendan Rodgers has made a profound impact at the club, achieving unprecedented success in his first year in Glasgow, but the Hoops have their sights set on even bigger, better things. Namely, Europe.

Indeed, having qualified for the group stages of the Champions League this season, bowing out bottom of their group without a single win, Celtic are now targeting the competition’s last 16. They aren’t afraid to admit so either, with Rodgers articulating this aim after the club’s Scottish Cup triumph at Hampden on Saturday.

“You have to be careful and recognise where we are,” he said. “We’re 10 times behind budget-wise. You have to be realistic. We want to qualify, first and foremost. That will always be a challenge. Then we have to try and see what we can do. The gauge for us is to measure calmly once we’ve qualified. We would like to be in Europe for the second part of the season, whatever competition that’s in, and that’s a huge, huge ask for a club like ourselves.”

Celtic's next step under Rodgers

It’s a belief echoed by majority shareholder Dermot Desmond. With domestic supremacy secured, and likely to go unchallenged for the foreseeable future, everything at Celtic will now be geared towards making progress in the Champions League. That will be reflected in the business they do in the transfer window this summer. 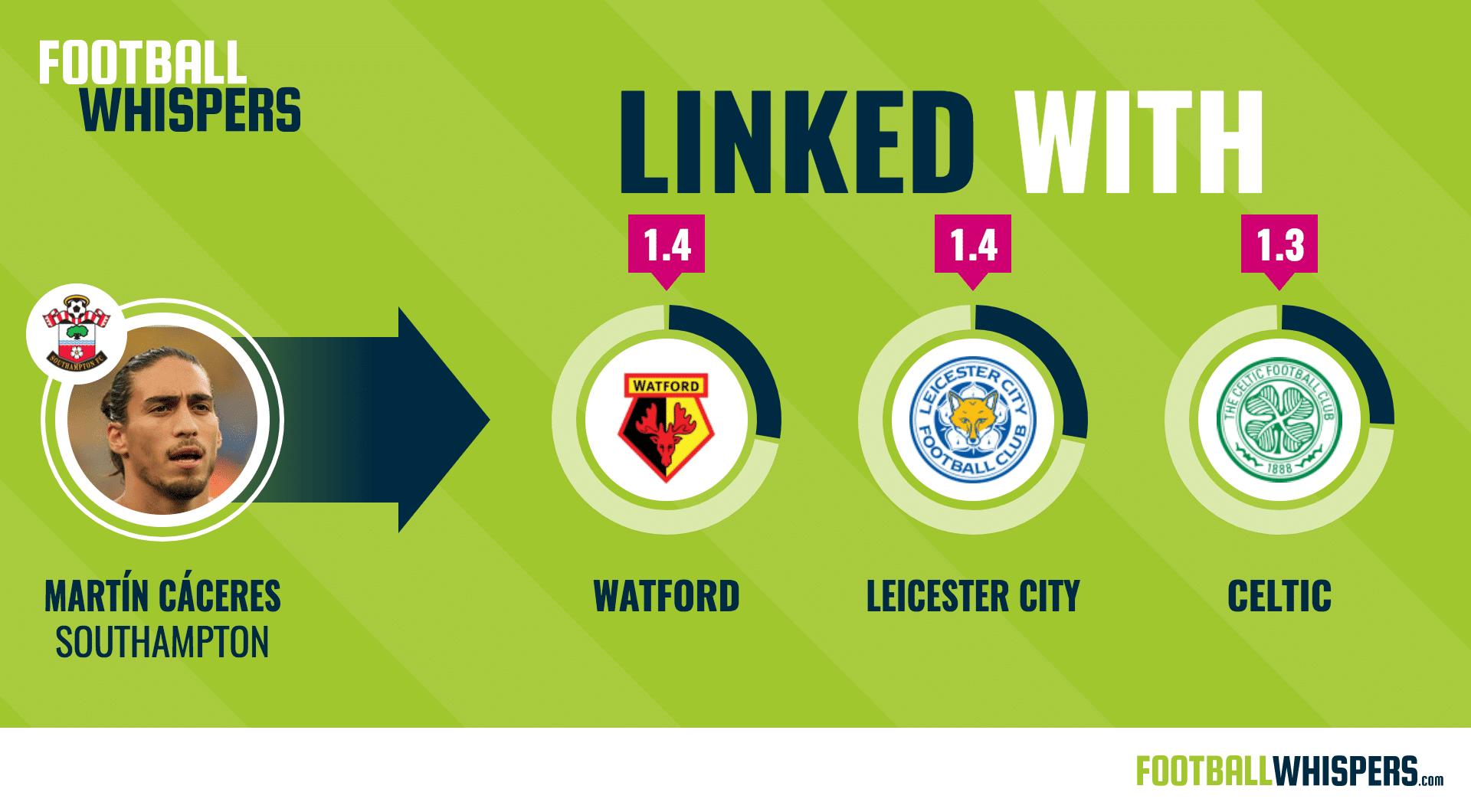 Speculation is already swirling over potential arrivals at Celtic Park ahead of the 2017/18 season, with Aberdeen winger Jonny Hayes making the back pages this week as the Scottish champions look to raid their closest challengers. But the possibility of Uruguayan defence Martín Cáceres moving to Glasgow is most compelling.

Celtic are in the market for a centre-back this summer, with Rodgers expected to make the position something of a priority. While the Hoops boasted the strongest defensive record of any side in Scotland this season, conceding just 25 goals in 38 league games, their deficiencies at the back were exposed by top calibre opposition in the Champions League.

It is the great paradox of Celtic’s season that while they went unbeaten domestically, they also lost 7-0 to Barcelona at Camp Nou. This is why Rodgers might turn to Cáceres. Celtic are reported to have competition for the signature of the defender, with Leicester City also interested, but with Champions League to lure the Uruguayan they may well have the upper hand. But would a move for Cáceres really be so wise?

Having played for Barcelona and Juventus previously in his career, Cáceres has the kind of pedigree Celtic will be looking for this summer, but at 30 years old there’s a case to be made that he is well past his best as a top level performer.

Cáceres made just one appearances for Southampton after joining the South coast club in January, with Claude Puel making the decision to release the Uruguayan at the end of the season. Having played so little first team football of late, it’s almost impossible to judge just how much of an impact Cáceres would make at Celtic. For that reason, Rodgers might be best advised to steer clear of the 30-year-old.

Whether Cáceres is the man for the job or not, Celtic will surely seek experience in the transfer market this summer. Kolo Toure filled that role last season, arriving as a free agent to broaden Rodgers’ options, although the Ivorian became something of a cheerleader later in the campaign, renowned for his viral dance videos than his defending.

But it’s worth remembering just how important Toure proved early on in Celtic’s record breaking season. With Rodgers still settling on his first choice back four, struggling for personnel through injuries to Jozo Simunovic, Dedryck Boyata and Erik Sviatchenko, the former Arsenal, Liverpool and Manchester City was a solid stop-gap solution.

He offered Celtic experience at a time when they needed it most, helping the Hoops through Champions League qualification and into the group stages. Toure fell out of the starting lineup soon enough when others ahead of him in the pecking order returned to full fitness, but he did exactly what was expected of him, making 17 appearances over the course of the 2016/17 season.

Whoever Rodgers brings in to add experience to his backline, he’ll want them to play more of a role than Toure did, but the Ivorian set a precedent. Whether Cáceres can follow that precedent is open to debate. Rodgers has more than earned the trust needed to make that decision.