Manchester United‘s fine start to the 2017/18 season continued as they cruised beyond Burton Albion in the third round of the League Cup, seeing off Nigel Clough's Championship side in a comfortable 4-1 victory at Old Trafford.

The Red Devils return to Premier League action against Southampton at St Mary's Stadium on Saturday afternoon and, although they remain unbeaten and sit jointth-top of the table alongside rivals Manchester City, their last away day, against Stoke City, resulted in their only dropped points to date, slipping to a 2-2 draw.

José Mourinho‘s men will be keen to reestablish their dominance on the road against the Saints, and French forward Anthony Martial, who's been in scintillating form this term, could be United's most potent weapon against the ninth-placed side.

The former Monaco man has been directly involved in a goal every 46.8 minutes so far this season, with four goals and two assists already to his name. He started against Burton in midweek, scoring the fourth and dazzling with his trickery, completing an incredible ten dribbles.

Martial has been alternating with Marcus Rashford on the left wing in Mourinho's side so far in 2017/18, with one of the pair starting and the other, almost invariably, coming off the bench to score.

They were both named in the sharing XI against Burton, but Rashford, who scored twice on the night and assisted Martial's strike, had to leave the field due to injury. The knock the 19-year-old received didn't look serious, but the fact he went straight down the tunnel to receive treatment suggests the Frenchman may be more likely to line up against the Saints.

Whichever of the pair features at St Mary's, their shared ability to dribble their way beyond multiple opponents, through confined spaces, and link neatly and effectively with team-mates, could prove decisive.

Under Mauricio Pellegrino, the Argentinian manager who came from Deportivo Alavés to replace Claude Puel in the summer, Southampton have been lining up, like United, in a 4-2-3-1 shape. Defensively, they operate with a low block and press aggressively when the opposition look to progress into the final third of the pitch. 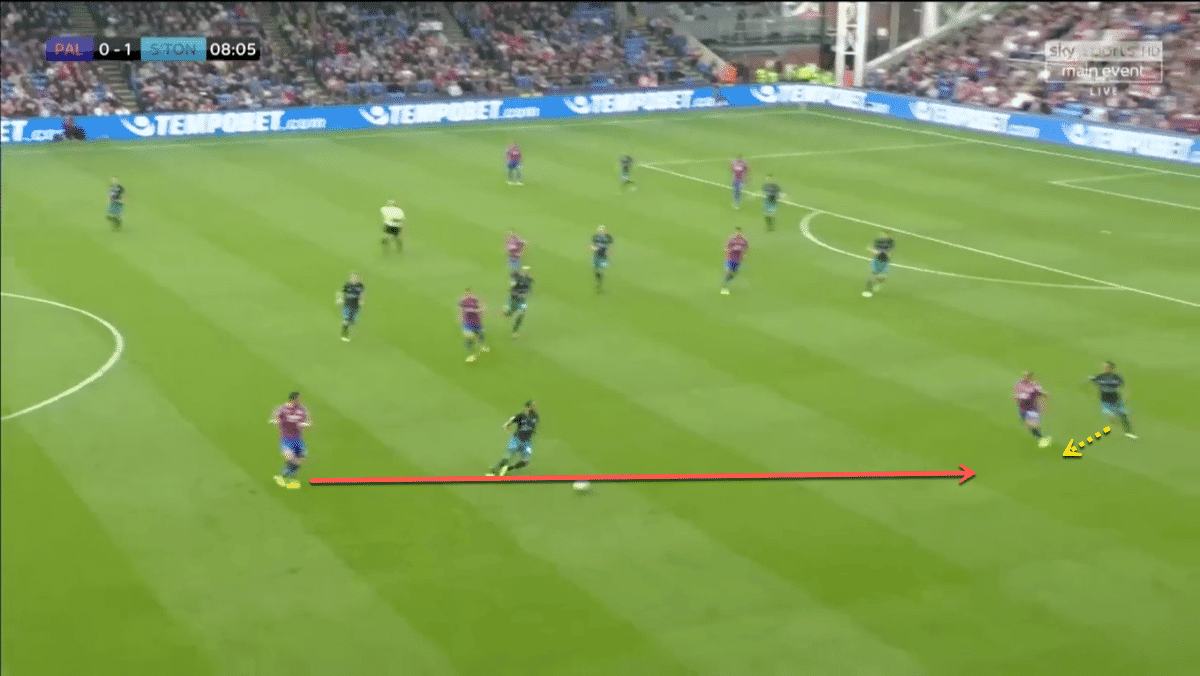 The above image, taken form the Saints' win away to Crystal Palace, shows the intensity with which they press from their low block. As the ball is played to Andros Townsend, he is immediately put under pressure, preventing any forward progress. 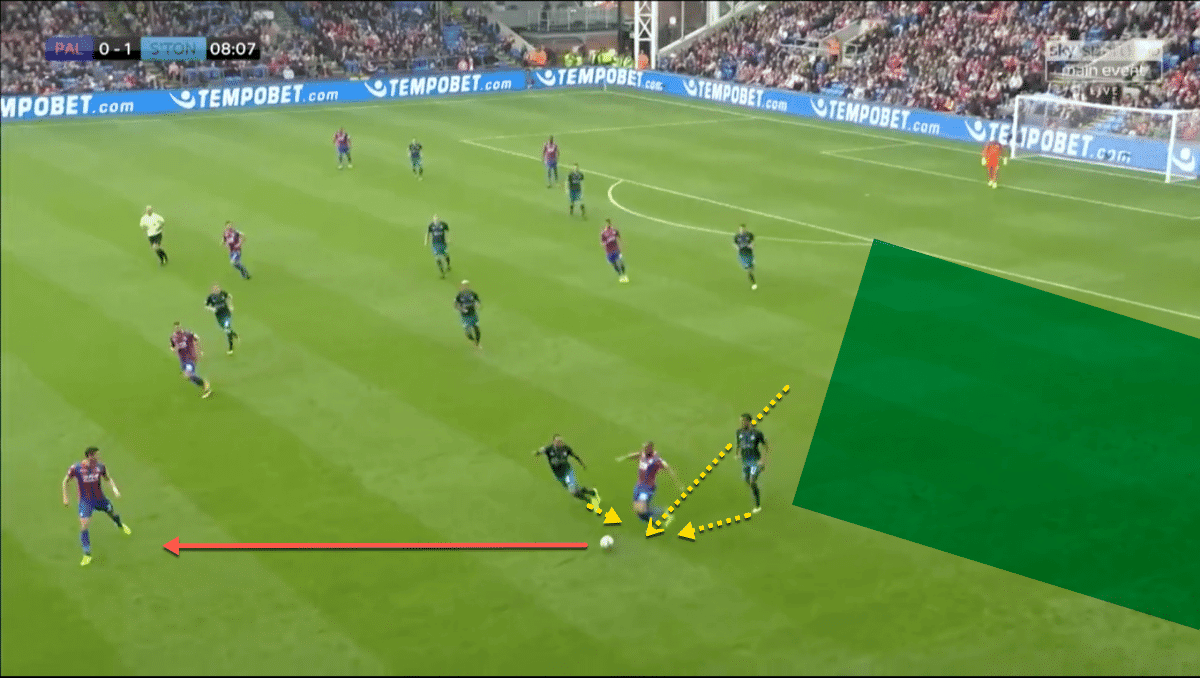 Townsend is forced back ten yards and has to play a return ball to the team-mate who fed him initially. However, as the above image shows, by moving to meet the Palace winger as he receives the ball and harrying him up the pitch, Saints left-back Ryan Bertrand has vacated a large space (highlighted) in behind.

This is something that United, through their dribble masters, could look to exploit. Rather than allowing themselves to be forced back, Martial and Rashford, both comfortable under pressure, could take on their marker and compete to get into the open space.

Of all the players to feature in more than 50 Premier League minutes so far this season, only Liverpool‘s Alex Oxlade-Chamberlain (6.3) averages more successful take-ons per 90 minutes than Martial (5.2).

His ability to receive the ball to feet, under close guard of opposing defenders, and progress his team towards goal is remarkable, and could pay dividends against the Saints' aggressive style of pressing. 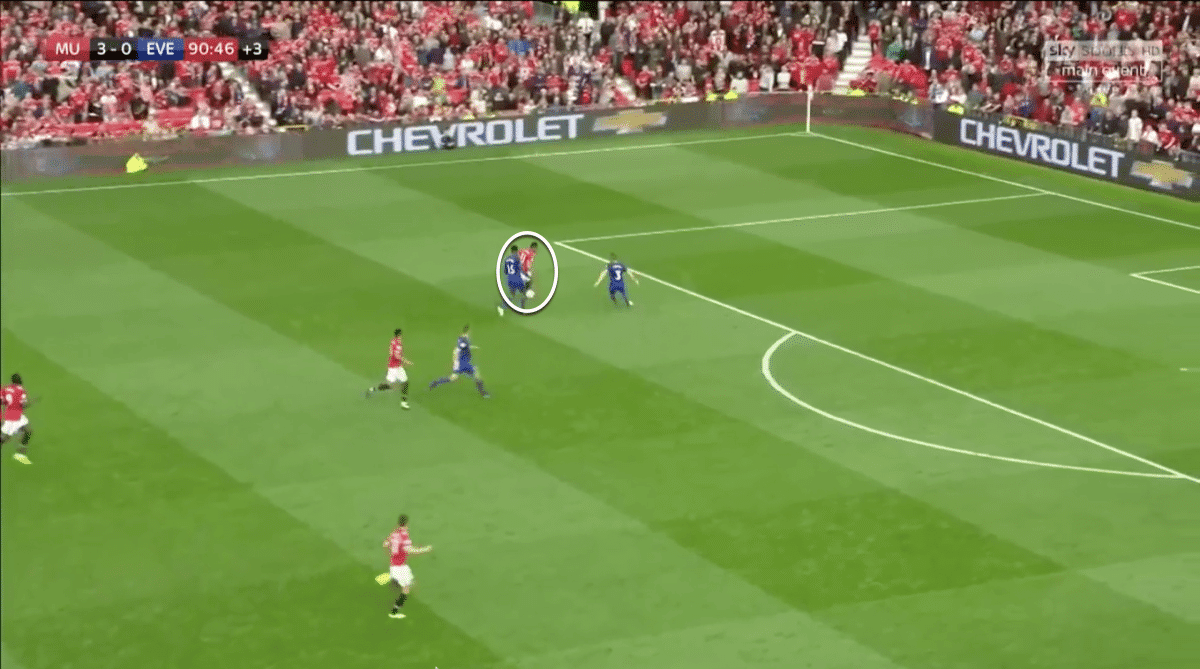 Here, in the 4-0 win over Everton at Old Trafford, Martial is breaking down the left but appears to have been caught up and stopped by two defenders who close in on him. 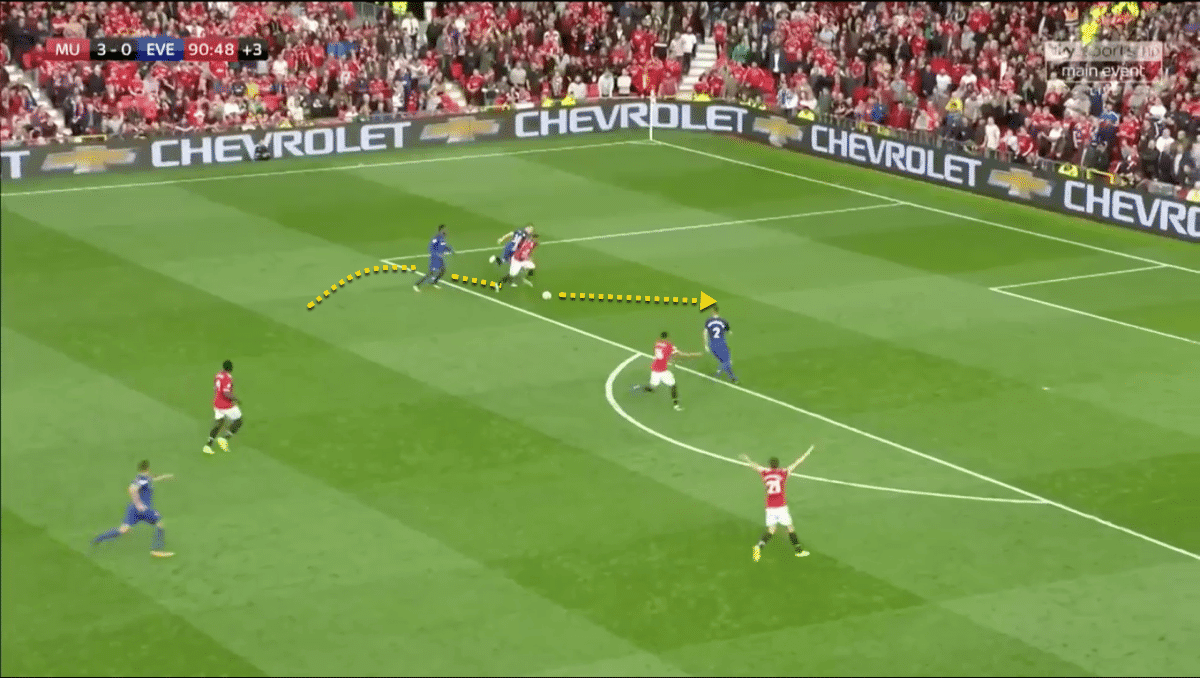 However, with surprising upper-body strength, outstanding close control and skill, he holds of the Everton pair before bursting between them, through on goal. He then outfoxes former United midfielder Morgan Schneiderlin with a slick change of direction to win a penalty, which he converted. 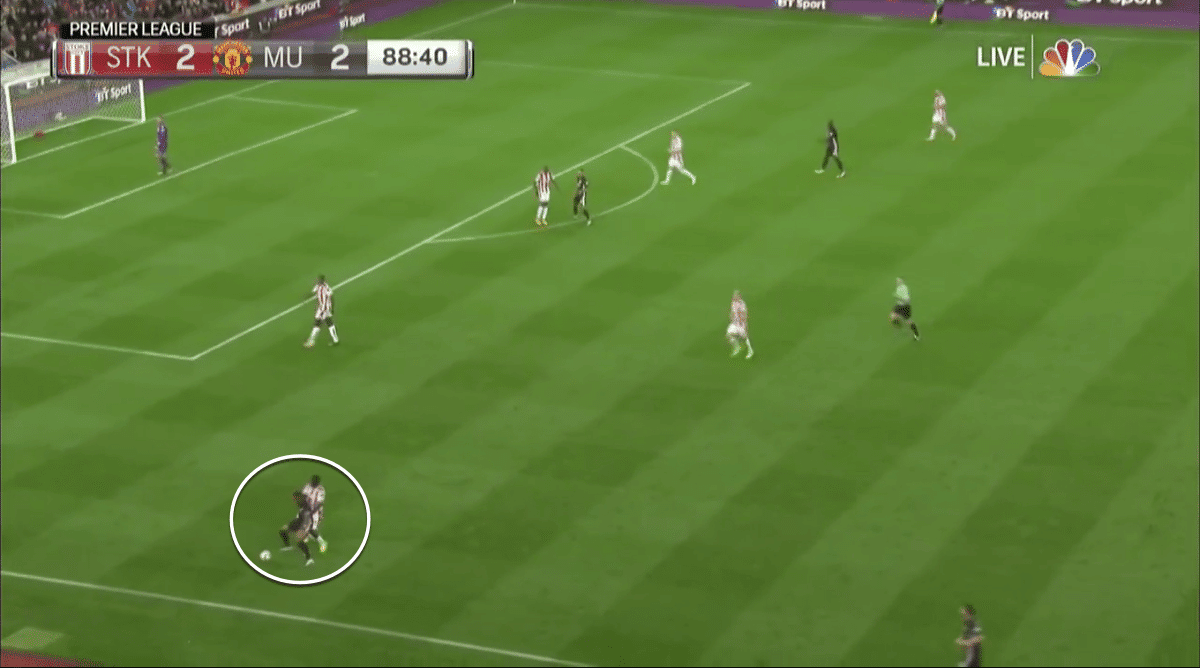 This time, against Stoke, Martial is being harried by another former Red Devil, Potters wing-back Mame Biram Diouf. The converted striker engages a physical challenge in an attempt to check the 21-year-old's progress down the left. 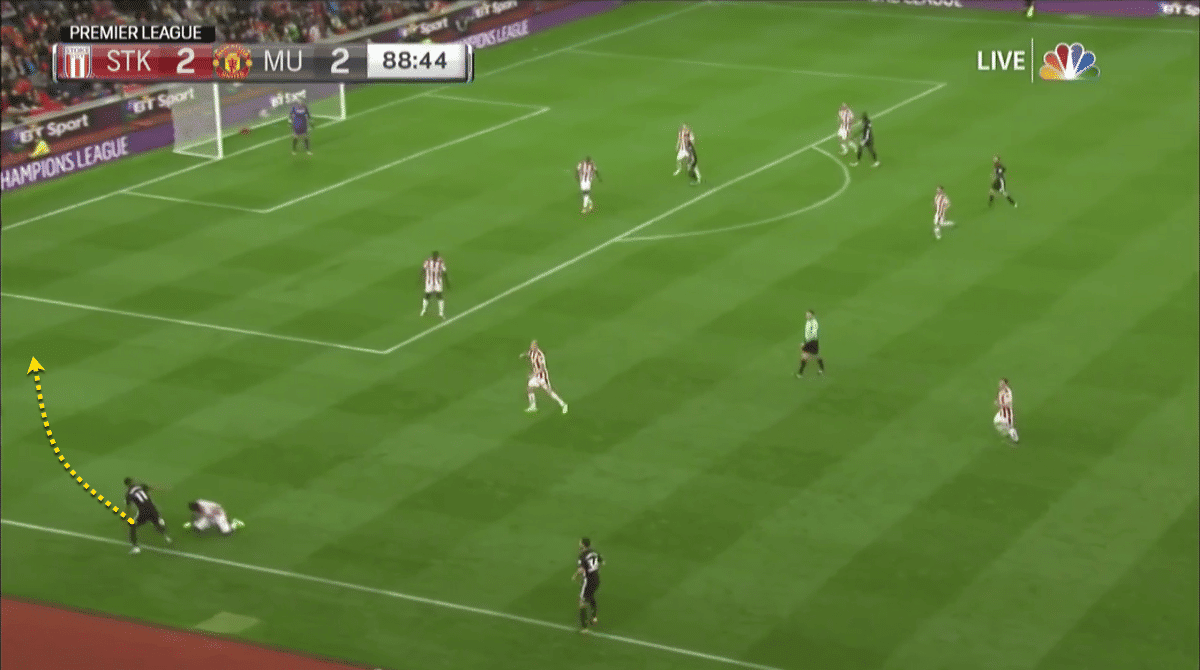 But, despite having minimal space to do so, Martial turns to face up the Stoke man, before then utilising a bamboozling stop-and-go manoeuvre to send the Senegalese player to the turf, racing away and crossing dangerously into the box.

This goes to show that an aggressive approach to closing down, and a physical method of one-on-one defending, is not especially effective against the France International. The same is true of Rashford who is a similarly gifted dribbler. If Southampton are to adopt their customary pressing style against United, whichever of the young duo starts on the left could punish them by evading challenges and exposing space.

One of the biggest worries for Southampton is that, not only has Martial rediscovered his dynamism in the final third after a sub-par second season at Old Trafford, he is also devastatingly clinical, whether as a creator or scorer.

When in behind the opposition's defence, if shooting for goal himself is not a viable option, he is capable of picking out a team-mate in a scoring position, or playing the ball into a dangerous, high-percentage zone. 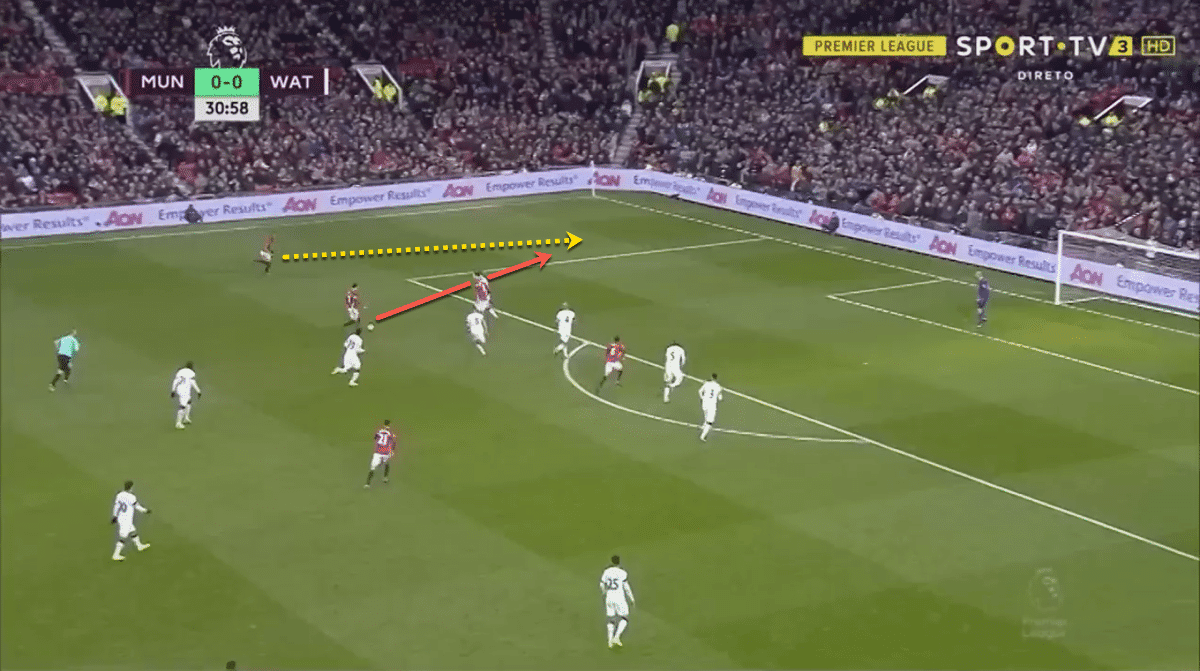 Above, we see Martial's run down the left against Watford last season, picked out by playmaker Henrikh Mkhitaryan. 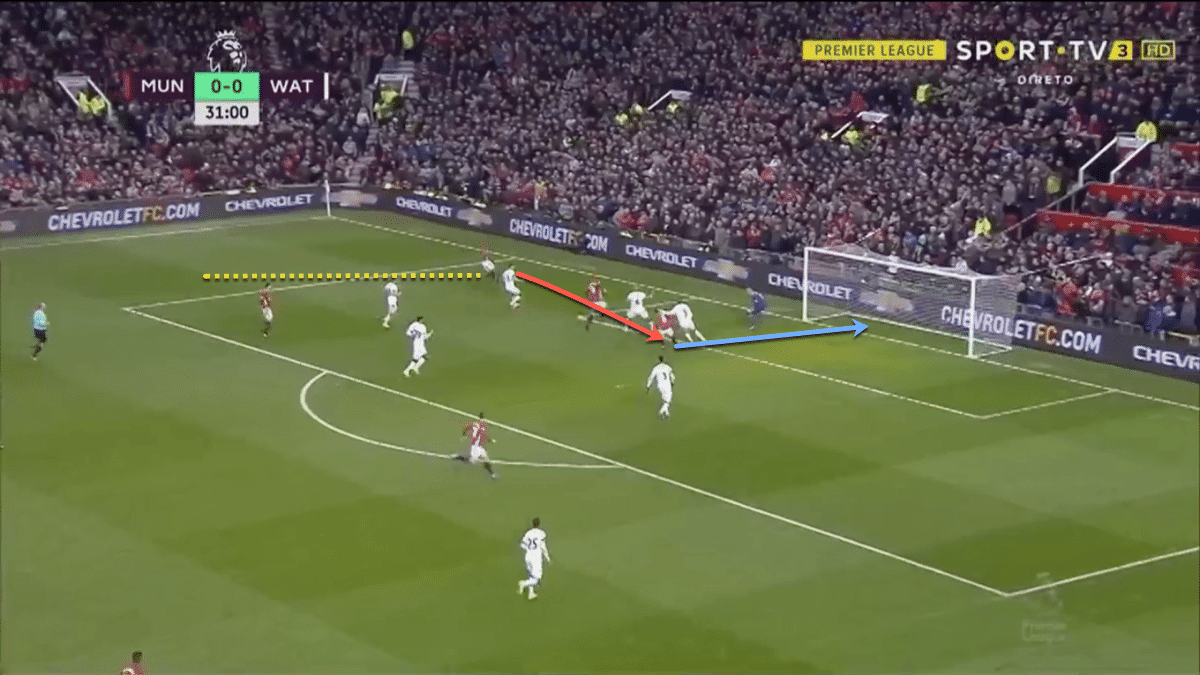 As he does so well, the Frenchman breaks toward the byline and plays an inviting cutback into a dangerous area. Zlatan Ibrahimović misses the ball with an attempted back flick, but Juan Mata is on hand to sweep home from six yards.

Martial has been an incredibly productive creative force for United this season. Indeed, no player in the Premier League with more than two appearances to their name can match his stunning average of 5.2 key passes per 90 minutes.

Pellegrino might want to plan for providing right-back Cédric Soares with some additional defensive cover for the visit of the Red Devils. Otherwise the Portuguese full-back could be in for a long afternoon.

United are still without Paul Pogba due to the French superstar's hamstring injury, with Marouane Fellaini likely to deputise once again. Mourinho will select between Martial and Rashford on the left flank, and Daley Blind, Matteo Darmian and the returning Luke Shaw at left-back.

Liverpool transfer target Virgil van Dijk is yet to feature for Southampton this term, and that is unlikely to change against United, with Wesley Hoedt and Maya Yoshida set to start at the heart of defence. Defensive midfielder Oriol Romeu will be tasked with shackling Armenian assist master Mkhitaryan.

You can select your own United and Southampton line-ups by clicking on the interactive graphics above. When you're done, you can then share your teams with friends on social media.