Ole Gunner Solskjær’s decision to have Anthony Martial lead the line against Chelsea came as a surprise to most. The Frenchman has spent the majority of his Manchester United career on the left of the attack and, to his credit, he’s been a reliable threat from that area.

Marcus Rashford was tipped to take over from

It’s a tiny sample size and shouldn’t be used to make a definitive statement, but the experiment appeared to be a success as a lethal-looking United side dismantled Chelsea on the break.

The former Monaco man was in electric form and bettered most of his 2018/19 Premier League averages in 90 minutes at Old Trafford.

For starters, the shift in position meant he had more touches in the penalty area. He managed eight vs. Chelsea when his average last term was 6.25. The more involved he is in the final third, the more dangerous United are. It’s that simple.

Why? Because United's new No.9 is a tricky customer. He attempts dribbles, five on Sunday, up from 3.65 last season, and always tends to complete around 50 per cent of them.

Against Chelsea, he had an incredible 80 per cent success rate. If he’s dribbling in the final third United have the opportunity to win fouls while he creates space for others and carves out high-quality chances. 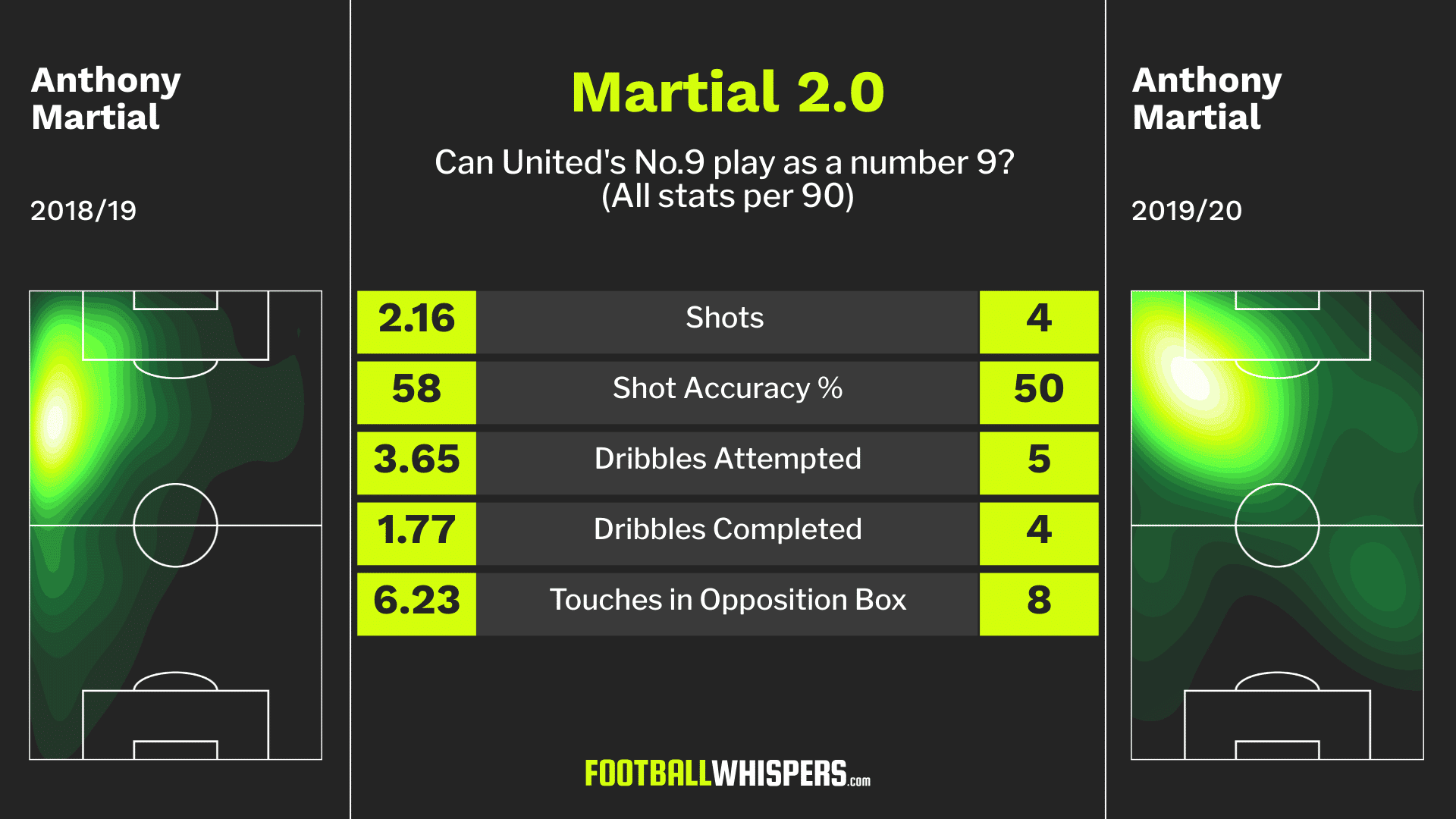 Martial took four shots and finished the match with an expected goals total of 0.77. Last season, Martial was averaging 2.16 shots for an expected goal per 90 total of 0.44. The United forward adapted to his new role but the biggest benefactor from the switch might be Rashford.

Red Devils supporters might not want to hear this but the new-look forward line isn't dissimilar in dynamic to the way rivals Liverpool play.

Martial isn't a true No.9. Instead, he likes to drift wide and drop deep. Roberto Firmino does exactly that for the Reds and his selfless movement creates opportunities for others. More often than not, he'll drop deep and Mohamed Salah will cut in from the right and take up space centrally.

Against Chelsea, United used a similar tactic. However, instead of the right side of the attack being the focus, it was the left. As soon as Martial vacated the central area, Rashford looked to fill it. 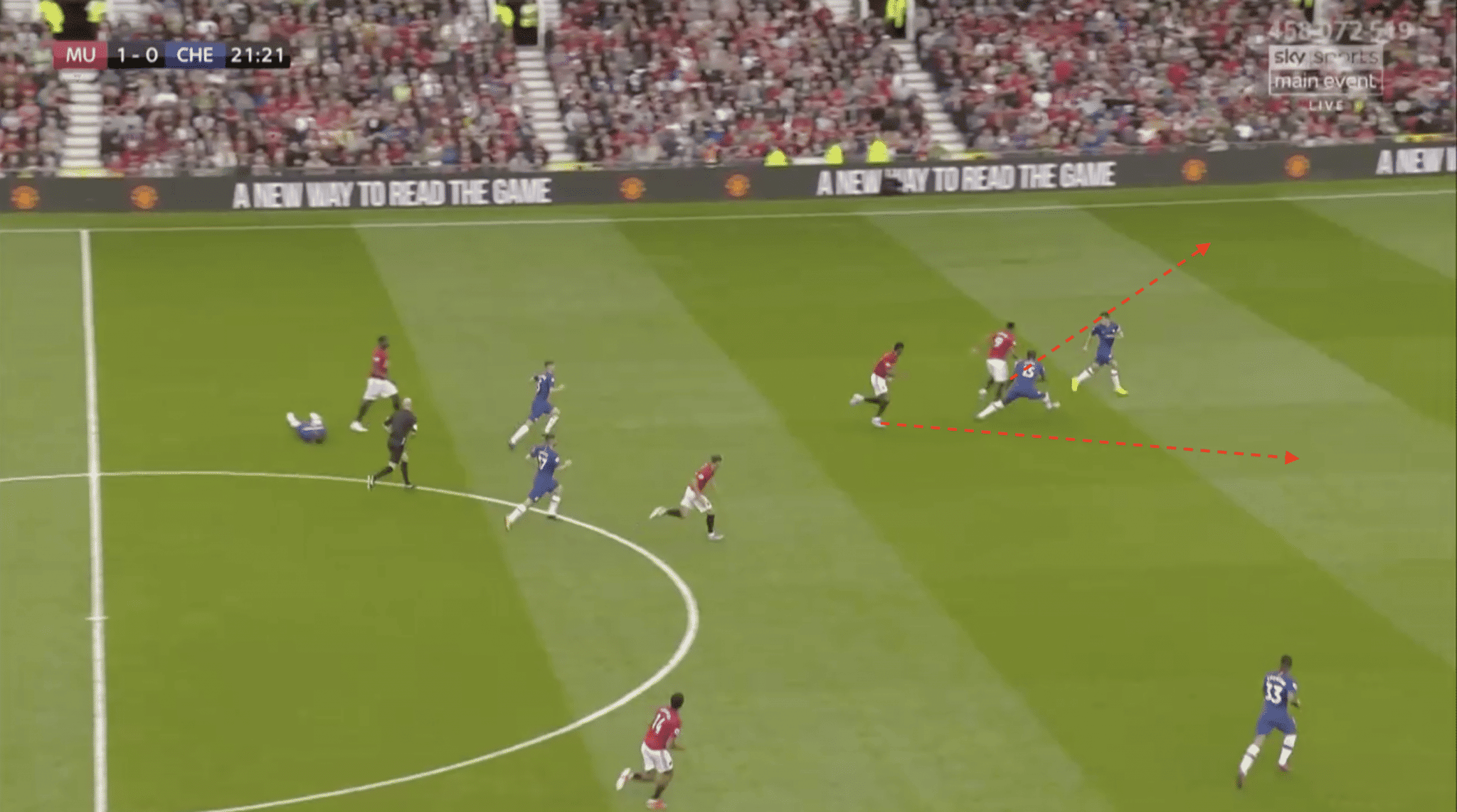 It's clear in the screenshot above. Martial picked the ball up and his first instinct isn't to look to knock the ball into space centrally behind the Chelsea defence but to drive into the wide area. While he's doing that, Rashford comes inside from the left and attacks the central area.

This subtle change to the starting XI allows Rashford to get into goalscoring positions but he's able to do so from different starting positions which gives him a bit more freedom. He's no longer being marked by two centre-backs and instead has to run off the full-back. It worked for Liverpool and Salah, there's no reason it won't work for United and Rashford.

In fact, Martial's goal comes about from a similar pattern of play with the United No.10 driving in from the left while the Frenchman pulls out wide.

The cross eventually comes into the box and it's Rashford who is central while Martial is at the back post. Given their starting positions you'd assume it'd be the other way round but the whole idea of the system is to have those two switching at will. It paid off spectacularly for Solskjær.

It looks to be sustainable, too. It's going to be something to watch out for in the coming weeks to see whether opposition teams can figure out a way to stop the dynamic duo.