A humbling Europa League experience, which saw them crash out of the group stage with just one point six months after reaching the final, was followed by disappointment on the domestic front; falling at the first hurdle in both cup competitions before missing out on European qualification after finishing fifth in Ligue 1.

Failing to crack the top four has plunged them deeper into trouble regarding Financial Fair Play, too. With that, this summer will see something of an exodus from the Stade Vélodrome.

Mario Balotelli is set to leave when his contract expires at the end of June, while the futures of Kevin Strootman and Florian Thauvin are uncertain following the failure to qualify for the Champions League.

Another regular first-teamer tipped to leave is Morgan Sanson, and the 24-year-old midfielder has been linked with a move to the Premier League.

West Ham United, Newcastle United and Wolverhampton Wanderers are all credited with an interest. With a strong possibility he'll be playing in England from August, we take a look at what to expect from Sanson.

A versatile midfielder, Sanson has often played as one of Marseille's two holding players, alongside the likes of Strootman and Luiz Gustavo in a 4-2-3-1.

He has, however, performed other roles. He has partnered Maxime Lopez in a 4-4-2, often sitting deep with the more creatively inclined 21-year-old influencing play higher up the pitch.

His role during 2018/19 was defensive compared to 2017/18, his first full term after arriving from Montpellier in January 2017, in which he often operated in a more advanced midfield role supporting the striker.

The Football Whispers player persona model (below) illustrates the areas in which he was most prominent throughout the two campaigns.

This positional shift unsurprisingly impacted his attacking output. In 2016/17, he scored four goals and notched 12 assists. In 2017/18, it was nine goals and two assists while in 2018/19, it was five and three respectively.

Since moving to Marseille, he has proven adept at providing a clinical edge in the final third, with eight of his nine Ligue 1 goals in 2017/18 coming from inside the box. On top of that, he created six Big Chances and showed his threat on the counter, with a league-high seven fast breaks from midfield.

Shot-happy, only two midfielders surpassed his total of 26 shots from the centre of the box.

In 2018/19 he performed a different role under Rudi Garcia, who stepped down as manager at the end of the season after three years in charge. A deeper berth meant assuming more ball-winning responsibilities; his possessions won in the middle and defensive third rose from 2.98 and 1.82 to 4.15 and 2.73 respectively. 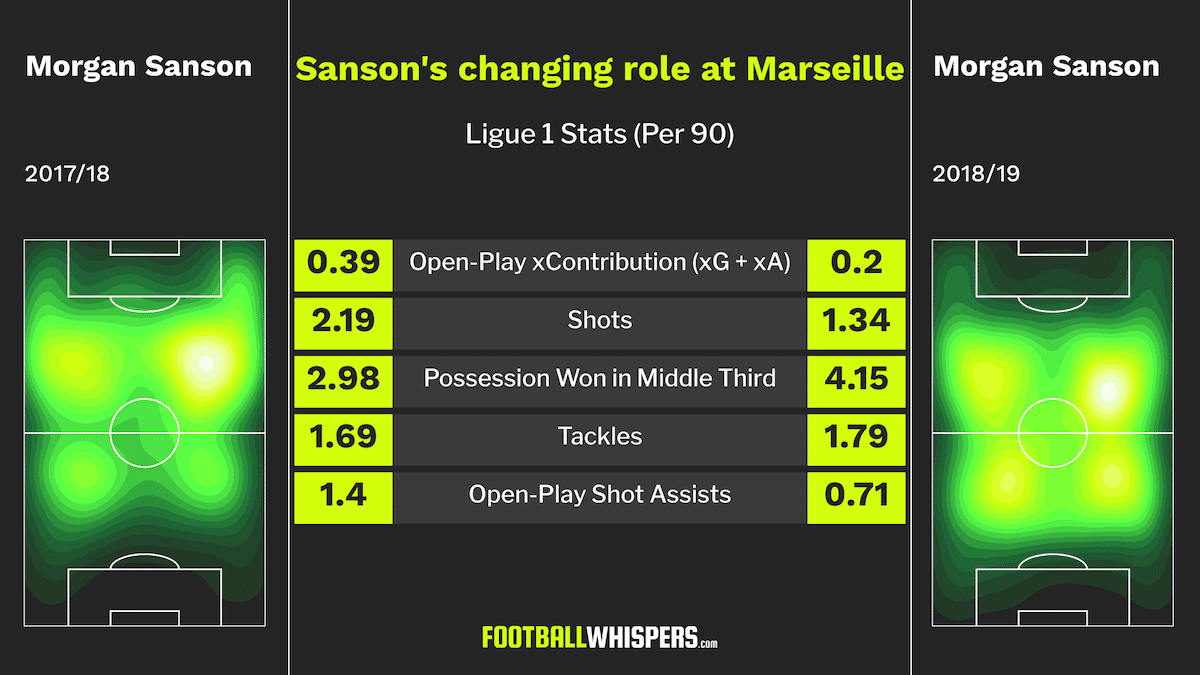 Who would he suit?

There are few tasks Sanson can't perform in midfield. At 5ft 9ins, he is not the most dominant in aerial battles but his abilities as a goalscorer, creator and ball-winner make him an extremely attractive proposition for Wolves, Newcastle and West Ham.

It's difficult to see him featuring prominently for Wolves. In Rúben Neves and João Moutinho, Nuno Espírito Santo has two cast-iron first-choice midfielders while Leander Dendoncker, who is tipped to join permanently after a successful loan spell from Anderlecht, worked well alongside the Portuguese duo.

Newcastle, on the other hand, are expected to pursue a central midfielder this summer with Isaac Hayden and Mohamed Diamé set for the exit door at St. James' Park. Meanwhile, Sean Longstaff has also been linked with a move to Manchester United.

As a well-rounded midfielder capable of playing in a variety of systems, Newcastle's interest makes a lot of sense. However, given the current uncertainty regarding Mike Ashley's future as the club's owner, it seems unlikely the Magpies will meet Marseille's £31.2million asking price – £10million more than they paid for Miguel Almirón in January.

Given that, West Ham – who, according to Sky Sports, are in talks with the French club – seem the most likely destination. Manuel Pellegrini's Hammers should be targeting seventh spot in 2019/20 after an up-and-down first year under the Chilean saw them finish tenth.

Declan Rice is an integral part of Pellegrini's plans but the 65-year-old is keen to add more quality to midfield as competition for captain Mark Noble.

Sanson is capable of partnering either Rice or Noble in midfield but could also provide the creative spark Pellegrini hoped to find with the acquisition of Samir Nasri in January. The Frenchman will leave when his contract ends this summer after managing just 245 minutes of action but his countryman could be the one to inject imagination and flair into the Hammers' midfield.

There is an obvious link to Dimitri Payet given the clubs involved but Sanson is nothing like the ex-Hammers favourite. Whereas the former was a playmaker with a penchant for mazy dribbles and spectacular goals, Sanson is a much grittier presence, but a quick-thinking, quick-footed operator who has developed a knack for popping up in goalscoring positions, too.

Sanson would be West Ham's second-most expensive transfer behind Felipe Anderson. However, given his age and skill-set, he's a player who would elevate their midfield and boost the club's quest for European football.