Certain managers and players are synonymous with one another. Harry Redknapp and Niko Kranjčar, Neil Warnock and Paddy Kenny, or José Mourinho and Ricardo Carvalho. In the modern era, few more so than Marouane Fellaini and David Moyes.

The duo have worked together at Everton and, with less success, at Manchester United. Now another reunion could be on the cards at West Ham United.

According to reports, the new Hammers boss will make the Belgian his first signing since returning to the London Stadium on an 18-month contract at the end of 2019, a clear indication he'll be around longer than the six months he served in his first stint.

For his part, Fellaini only moved to Chinese Super League side Shandong Luneng in January last year. But thanks to a law change, foreign players will have to take a 75 per cent pay cut to move to the CSL or sign contract extensions with club in the league. That would mean the 32-year-old's salary dropping from a reported £200,000 per week to ‘just' £50,000.

But having made his fortune in China, the lure of a Premier League return might be too great. After all, Fellaini has unfinished business in England. Despite having a powerful advocate in Mourinho, the fuzzy-haired Belgian was a figure of fun on these isles.

But it wasn't always like that. When Everton paid a club-record £15million to bring Fellaini to Goodison Park he was an unknown and viewed as a bit of a gamble. That didn't last long. He soon crash-bang-walloped his way into the hearts of Evertonians and nightmares of Premier League defenders with his rambunctious style.

In doing so, Fellaini became of the most-feared midfielders of his type in the league. Sure, he lacked the refinement of a David Silva, the goals of Frank Lampard or game-changing drive of Steven Gerrard, but none of that trio had his unpredictability or penchant for causing a nuisance.

All that changed when he moved to Old Trafford.

In mitigation, he wasn't helped by Moyes' indecision. Fellaini had a clause in his contract which meant he could be signed for £23.5million before July 31. But United didn't complete the deal until deadline day, September 2, and had to pay an extra £4million. Far worse, it made the club's only significant capture that summer look like a panic signing. 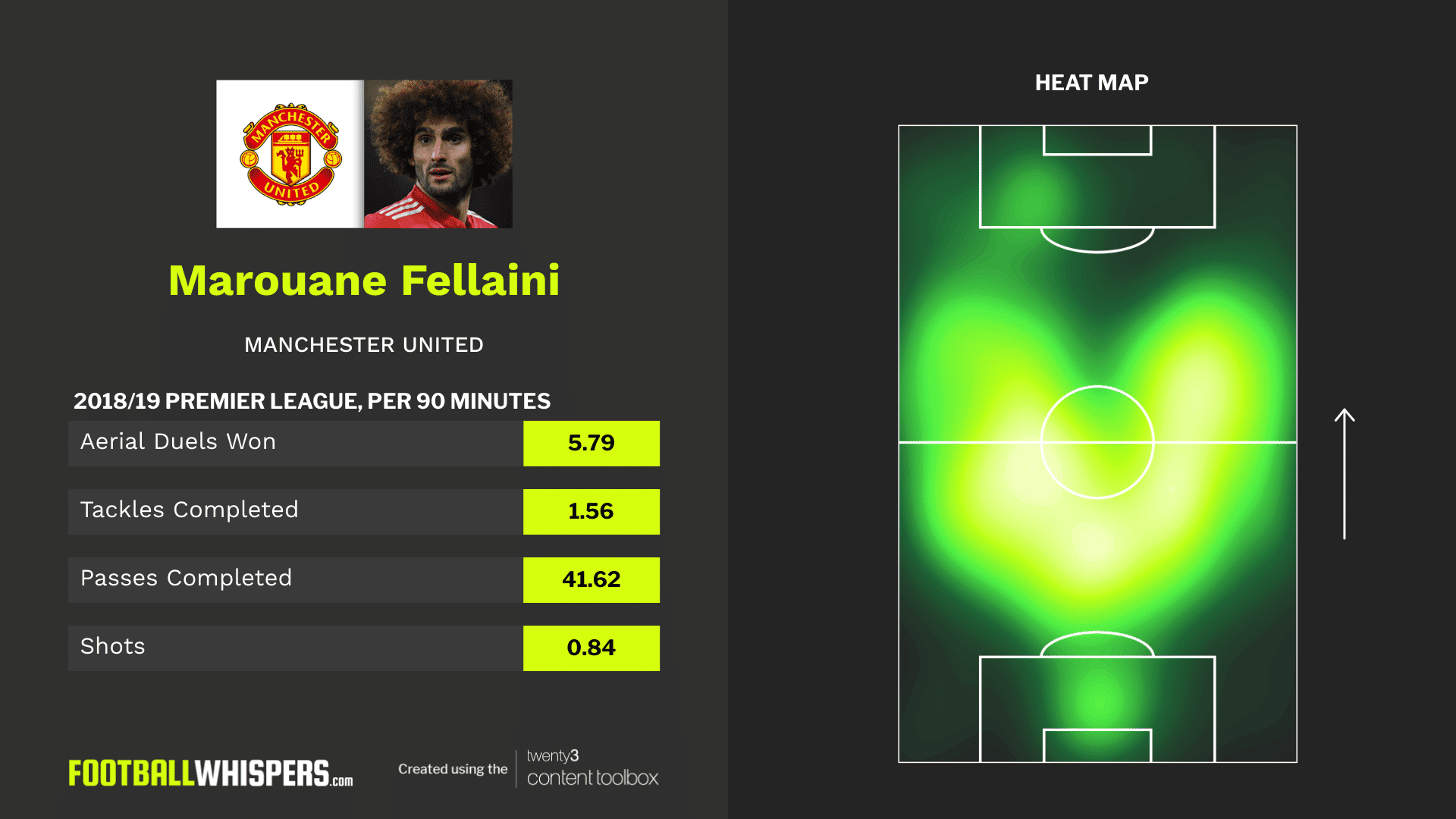 As the Scot's reign lay in tatters, Fellaini was tarnished by association. Regardless, the bond between the two remains strong, as Fellaini revealed in an interview in 2015. “When he left I was sad,” Fellaini said.

“We had heard things on the radio and TV. It was after a defeat to Everton. I did not know if it was true or not. Then I arrived the next day at the [training ground] canteen and I saw him in his suit rather than his tracksuit. I told myself: ‘This is the end.’

“It was weird. After I had eaten he summoned me to his office and he told me the news. This is football. There were tears. This is normal. I am a human being. I worked with him for six years. He was not a second father but almost. He helped me a lot.”

He never quite recovered from that initial disastrous season and even though Mourinho found a use for him as a human wrecking ball, his United career peaked as a squad player under the Portuguese.

But remembering Fellaini solely by his five-and-a-half years with a dysfunctional, chaotic Manchester United is wilfully overlooking his true value.

The former Standard Liège star brings a unique threat with him whenever he enters the field. His reputation as a great unsettler of defences precedes him and necessitates more than one marker. Unsurprisingly, he's a highly valuable weapon at set-pieces and even played as a centre-forward on occasion for both his previous Premier League employers.

If the Hammers can agree on a small fee to bring Fellaini back to England it's a deal which makes a lot of sense. Although signings like Pablo Fornals have been made with a view to a more sophisticated style of play, West Ham have been tepid in attack and a rethink – in the short-term at least – is required.

The bigger picture, though, is that the club's owners are unlikely to grant Moyes signings this month if they aren't thinking about keeping him beyond the end of the current campaign. Tossed aside after his last rescue mission at the London Stadium, the 56-year-old reportedly demanded an 18-month deal this time.

Not for the first time, Fellaini could be tarnished by his association with the unpopular Glaswegian.