Barcelona do not quite need a miracle to win the LaLiga title, but it is safe to say that the odds are heavily stacked against them heading into the final weekend of the season.

With Clásico rivals Real Madrid beating Celta Vigo on Wednesday night as expected, Luis Enrique‘s men will need to beat Eibar at the Camp Nou on Sunday evening and hope that Zinédine Zidane's charges suffer defeat by Málaga at La Rosaleda. All the Catalans can do now is wait, watch and pray.

Behind the scenes, though, Barcelona have already begun to plan for next season. The first task awaiting the club's hierarchy is the appointment of a new manager, with Ernesto Valverde, Jorge Sampaoli and Ronald Koeman are just some of the names who have been linked with the post.

Aside from that, they will need to draw up a list of transfer targets for when the window reopens; perhaps the key reason why Madrid are set to win the league is their strength in depth, which Barça have simply been unable to match this term.

The first signing may have already been completed: the agent of Marlon Santos, who made his Barcelona debut in a Champions League clash with Celtic earlier this season, recently confirmed that his client is set to join the La Liga outfit from Fluminense on a permanent basis when the current campaign comes to an end.

Barça staff have clearly been impressed by what they have seen during the defender's year-long loan in Catalonia, and the club are supposedly ready to offer Marlon – who started in the heart of the backline in the recent triumph over Las Palmas – a contract to remain at the Camp Nou.

“It has been done for a while. Everything is finalised between Barça and Fluminense,” agent Fred Moraes told Ràdio Barcelona earlier this week. 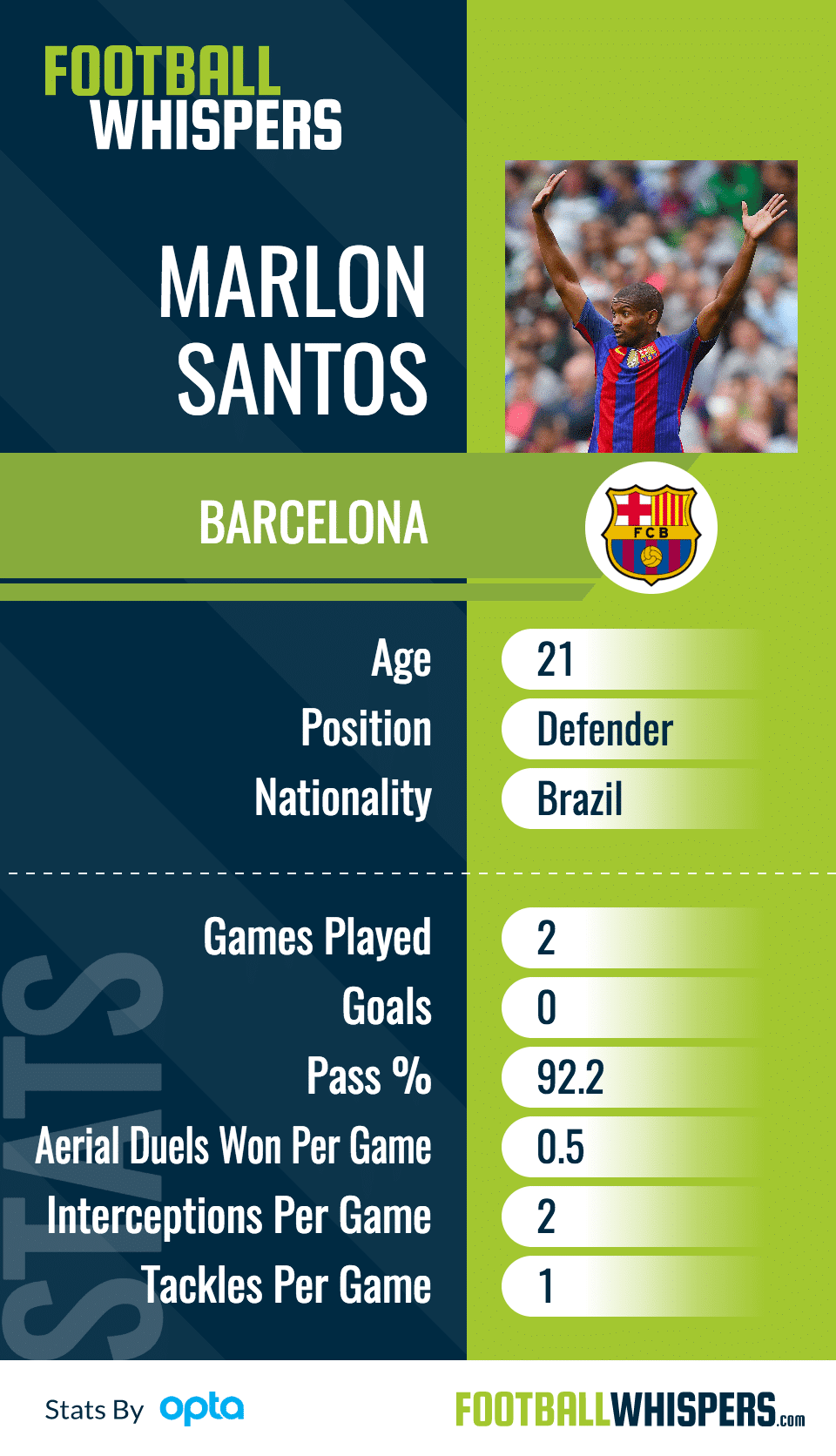 “The next thing now is to speak with the club, with Andre Cury in Brazil and with Raul Sanllehi, to see what is best for next season.

“The club have already decided [to convert the deal into a permanent one], but there is still a decision to be made moving forward.”

“Our idea is for Marlon to stay at Barcelona for many years and to continue learning, as he is doing at the moment.”

As Moreas points out, the next issue the club must resolve is whether they consider Marlon to be ready to compete for a place in the first team in 2017/18, or whether he would be better served going out on loan and getting valuable minutes under his belt elsewhere.

It is difficult to definitively rule either way given that the Brazilian has played just a single match in top-flight European football, but the – admittedly small – body of evidence we have available suggests that Marlon could be a valuable addition to the senior squad next year.

Enrique may have been a little apprehensive when he was forced to turn to the 21-year-old against Las Palmas, with Gerard Piqué's illness and an injury sustained by Javier Mascherano in the pre-game warm-up forcing his hand.

As it turned out, he did not need to worry: Marlon turned in an assured and mature performance as Barcelona ran out 4-1 winners in Gran Canaria.

No Blaugrana player made more interceptions (3) or clearances (3) than Marlon, while he also had more touches of the ball (96) than anyone on the pitch – including Andrés Iniesta, Lionel Messi, Sergio Busquets and Neymar.

His 75 per cent success rate in terms of the duels he contested was also better than the equivalent ratios of each of his team-mates, and Marlon came out on top in his only aerial duel too.

Barcelona centre-backs have to be able to play as well as defend, and the former Fluminense man – who played in midfield as a youngster in Brazil – looks to have the tools to do exactly that.

He made 88 passes on Sunday – again more than anyone else on the field – while his accuracy of 94.3 per cent would have delighted Enrique and the rest of his staff. Perhaps even more impressively, his 23 passes into the opposition half were successful 87 per cent of the time.

“I want to congratulate Marlon because it is not easy playing for the first team, away from home in those circumstances,” Iniesta told the Barcelona official website after the match. “He is training and playing with us because he has what it takes.”

“I was a bit nervous at the start, I could feel it in my stomach, but I managed to control my emotions,” Marlon himself told Barça TV. “I appreciate the support of all my teammates and the opportunity they gave me.”

It was certainly an impressive showing, particularly given the high stakes of the game. A single match is not enough to accurately judge any player, but the signs are certainly good when it comes to Marlon's prospects of establishing himself as a member of the first-team squad next season.

With Mascherano set to turn 33 in a few weeks' time and Jérémy Mathieu likely to depart in the summer, the Brazilian could serve as a back-up to Piqué and Samuel Umtiti in 2017/18, when Barcelona will be looking to claim both the LaLiga and Champions League crowns.